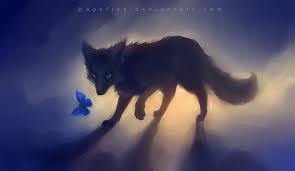 Not my artwork credit to maker
My first fanfic :D

Kowalski had just finished on the computer when he heard the door being opened. "What? Marlene should have been occupying Alice!" but to Kowalski's surprise it wasn't Alice, but a fox. Kowalski jumps under the desk to hide "We don't have any foxes in the zoo." The fox starts talking in an earpiece "The computer is in here." Kowalski looks behind one of the legs of the desk "What does she want with the computer. She's never going to get in." The computer pings access granted. "I stand corrected." As the fox is typing the door starts opening again and the fox jumps under the desk and lands on Kowalski. "ow!" The fox gets up "Shh you're gonna blow my cover!" Her fur was pitch black, her eyes are blue, like the night sky, she was a beautiful creature but Kowalski already hated her." Thanks a lot." Kowalski says as he gets up and dusts himself off. The fox turns around to see Alice sit down at her desk. "What were you doing here?" The fox yells. Kowalski gulps, he knows if he says anything wrong she could eat him in one bite. "I was...looking through the lost and found." The fox looks over at the lost and found. " Can't trust me huh? I like that, what's your name?" Kowalski blushes "uhh, Kowalski." The fox licks her paw " Keira." Kowalski shakes his head "What are you doing here, you don't live in the zoo." Keira stretches "visiting." Keira jumps to the window "Maybe we'll meet again." She jumps down just as Alice looks up.

Skipper was outside the office when he sees a black fox run past him. " Well someones in a hurry!" Marlene looks through the window and sees Kowalski under the desk. "He's in there. Question is how do we get him out?"

End of this chapter it's short but i might write another one soon i don't know.
Number1SkippFan and Sassl like this
Number1SkippFan Can't wait for the end! XD
Rainshadow999 Cool!
2
this is me.song:this is me (remix)from camp rock. singers: marlene and morice
posted by anna447
(a sputlight hits marlene as she sings. little does she know she'll sing a doet with morice)
marlene:I've always been that kind of girl that hid my face.so afrid to tell the world what I've got to say.but I had this dream bright inside of me.I'm ganna let it show,it's time to let you know to let you know

chores
marlene:this is real this is me I'm exsakley were I'm sapposed to be now ganna let the light shine on me now I've found who I am theres no way to hold it in no more hiding who I wanna be
this is me.

(well lets skip ahead shall we)
morisc:your the missing pace I need the song inside of me the...
continue reading...
It Burns White Hot
posted by Tripenguinman
So you, run down to the Harbor
Need to tell her that you love her
As the boat disappears, you've never felt so alone

It's frightening how fast things pass, isn't it? Take for example, my youth. Well I'll stay out of that mind-field, and it's classified. But I'm only talking to myself again. Being the Skipper of the team gives you the advantage of knowing all, as far as your crew's loyality goes strong. And they always have. They are my brother's in arms, and my amigos. But they did skimp out on something I'd like to know.

The days are short in the winter, as...
continue reading... 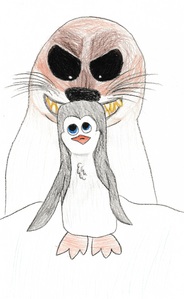 This is a fanfiction based upon the movie. Spoilers if you haven't watched it yet!

When they finally stopped laughing, Rico announced the people he had seen to Kowalski. Obviously, This was exciting news for him, as Kowalski's face lit up. Quick as lightning, if there was lightning in Antarctica, Kowalski dragged them out of the snow and on to see the people.

As Rico directed them there (with his keen, and odd sense of smell), Skipper observed the world around them. It was pretty amazing, for such a young bird who had just had his eyes opened up. He saw the beauty of his homeland....
continue reading...
Corpse party/penguins:tortured souls...chapter 1...
posted by spmana123
There once was a school that used to be here called heavenly host elementary school...it was a wonderful school with good teachers, especially the school nurse. She was nice, kind person that everyone loved, until one night, she missed a step while walking down the stairs, and fell and broke her neck on impact, and died....the school was devastated of what happened, including the principal, who went into a severe depression, and went to the roof one day and killed himself. The school was to be torn down soon after because if what had happened, and it was...

Lighting had struck at that moment...
continue reading...
2
A penguin comedy^_^ chapter 4
posted by spmana123
Everyone was waiting for the next challenge, skipper was talking to his group on how to beat the others, Michele and Rico were holding hands and talking to each other, and ivy was trying to help Kat getting skipper.

Suddenly, Phil walked into the room with the next challenge,

Phil: alright! Round 2 begins! This round, everyone wi participate, the challenge will be a cook off! I'll give you a item, and I'll randomly select 1 of you from each group to be the taste
Tester to test out your groups food, I will also be tasting these foods.

Kat:(yes! I can make skipper...
continue reading...
1
Finding the Light: (4) Kowalski's Back
posted by peacebaby7
The four of them went deep in thought, wondering how they were going to get out of this. After several minutes, Skipper heard something…it was Rico’s stomach growling. That gave him an idea. He whispered to Rico. “Hey Rico…”

“Are you hungry?” Rico nodded, confused. “You know Rico…those fish look very tasty…” Rico looked over to the bucket of fish that a lobster left next to the door, causing his stomach to growl even more. “You want those fish Rico?”

“Uh-huh…” Rico said sadly. “Then what are you waiting for? All you gotta do is break out of those restraints…”...
continue reading...
6
Differnet POM fans... Poemz :3
posted by SkippX101
So what does one do when you can't fall asleep and ur bored? This...These are just poems that i think describe different POM fans (the last is the best)...X3

Stuiped people who couldn't see
How wild and free...
We say what we think
We aren't afraid of the brink (tehe Rico)
They just can't admit
Or else they would be more legit

They still hid
They don't know what they can find
They watch in secret
Never knowing if their thoughts should stay... Akepen
They rather keep quite
Trying their best to fight it

They are proud
Shouting out loud
We are united!
Fights are unacceptable!...
continue reading...
1
I will steal your otter chp1: she is hot!
posted by andresandru
Skipper sat at his table, drinking his coffe, he just had a fight with his team - a simulated fight - and they won - he had teached them right, but just then someone knocked the door, and when skipper looked up, it was someone he hated, someone he thought he was over with, someone who made him a public enemy, it was no one else than Hans, the puffin.

"HANS?! WHY ARE YOU HERE?!" he shouted in atonishment

"I came back from Hoboken, you cheated on me!" he shouted angryly at him

"ok, ok, sorry, but it was MY revenge!" he shouted back

"ok, anyways, I have my own habitat!" he said showing skipper his...
continue reading...
3
Secret admirer- Part 3
posted by skipperfan5431
" It says. My Dearest Lilly, I have had these feelings for you for a long time now. These feelings of love,and compassion. I wish we could be together for all eternity, but alass, you don't even know I exist. Love, your secret admirer." When Mason looked up from Phill's hand movements Lilly was watching with a rather seductive face. It turns out that Kowalski was right. She can't be subjected to any sighns of love or affection while on the hormone stabilizer, because it will make her even MORE mate hungry than before!!! Normally, any male would kill to have Lilly for a mate, but when she's...
continue reading...

2
Ipad App: Dave Hacks into NWOT.
added by peacebaby7
Not sure what I just watched, but I thought the ending was funny. "Nope, the moment's gone. It's ruined."
video 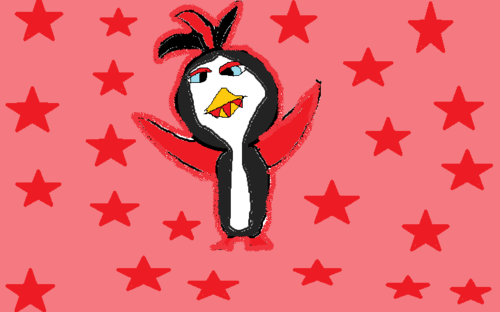 a random picture of corkie11
added by Colonelpenguin
Source: Me 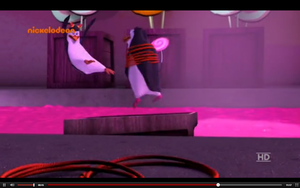 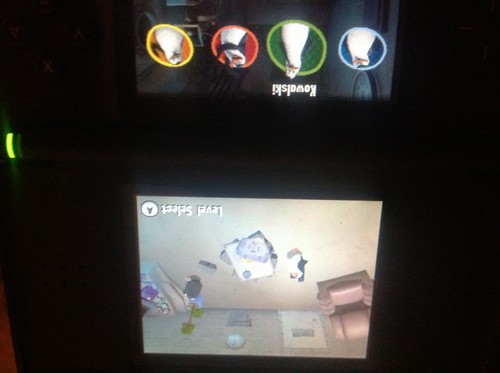 My PoM game
added by ricoiswsome
Source: Me and my DS
2
A New Crush Chapter 4
posted by Number1SkippFan
Hey this is my first fanfic so plz no hate! :)

That was one of the worst nights I ever had, I thought to my self, I need to get some help.

When I climbed out of my bunk I realized that none of my roommates were in their bunks, so I went out to the platform and saw them resting in the pool, they looked exhausted.

"Hey when did you all get up?" I asked

"For training" Private told me

Skipper thought he really needed to slap Private for that, but he held his ground, he felt nervous and paranoid again.

"Training...well okay training, I need...uh,...
continue reading...
What happend in our past...But you'r a girl!!! Chapter 3
posted by SkippX101
*Please note i will add a pic of Starlite in the last Chapter :D*

All 4 penguins and Marlene were staring at the sleeping female...She was showing her back to them, her back rising and falling as she breathed. She used her bag as a pillow. Obviously to protect it, not for comfort."May i just ask again...How can you guess a girls name right? Especially a unique name like...Starlantern?" Marlene looked at Skipper."i can honestly say i have and still have no idea how i just guessed her name right Marlene. It shall always remain a mystery, and her name is Starlite Marlene." Skipper shrugged as he...
continue reading...
2
The Magical Smart Tonic Pt 1
posted by Cherpeng 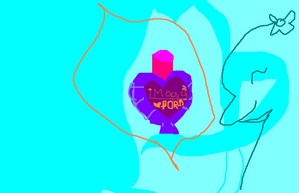 Before sunrise on a beautiful Friday, everyone in the zoo (only the animals) were packed up in the gift shop wondering why there was a meeting. Everyone was so excited and chit chatting they didn't hear Skipper yell "QUIET!!" in a very firm tone. Finally, Private screamed in the top of his lungs "BE QUIET SKIPPER WANTS TO TELL YOU SOMETHING!!" Everyone finally quieted down and looked at Private, then Skipper, then Rico and then Kowalski.

It was quiet for a moment until King Julian yelled "Welcome animals to the King Julian annual gathering!" Skipper slapped himself on the forehead and said "RING...
continue reading...
1
New Recruit Chapter three
posted by JediPenguin16
Chapter Three: Psyche

" We never get to eat sushi at Hoboken!' Nitra exclaimed as she wolfed down her dinner, glad to finally be rid of etiquette. She belched loudly and licked the tips of flippers. " And I haven' eaten in a few hours, I though I was gonna starve."

"We wouldn't want you to starve, how about whipping up another batch, Rico?" Skipper motioned to Rico. Rico nodded and grunted happily. He regurgitated up a pair of large Kitchen knives and proceeded slice the raw fish at lightening speed. Nitra watched in fascination as chunks of fish flew under the precision flippers of Rico. In...
continue reading...