I didnt know why he did this but Skipper decided to make up a squad, one by one we joined ~ i joined first! and became second in charge ~, Skipper said we had to do some training, we started doing some basic moves simple stuff, i was quite good at it. Next Skipper told us to swim lengths, he told me to go first.


I stared at the water not able to move ~ I hadnt been in the water since...that day when they died,when my parents died ~. I was crying and I silently waddled back into HQ sat on my bunk, and tried to forget the hole thing. I didnt say anything when i was asked about it, nothing.


The next day i was standing by the water, I was deep in thought. I tried to dip my foot in the water but i couldnt do it. Then i slipped, i fell into the water screaming. I was coughing and shouting for help. I shouted. I blacked out.


When I woke up I was surounded by my friends, they all asked me questions, in the end i had to explain that my parents drowned at sea when i was 21, i havent been swimming since then. I forgot how to swim ~ how many penguins do you know that cant swim? one just me! ~, i was enbarassed and i felt ashamed. Kowalski and Private have offered to teach me to swim, I feel happy knowing that they were trying to help.

Is this my new start?

DOES ANYONE ACTULY READ THIS! I wanna know! please comment if you do!
BTW you can now find me on fanfiction.net, i have a story that im woking on and two others in planning, and on that note theese chapters will be coming out sooner.
This is A.C, peace out
Annacrombie Anyone actuly read this?
2
Phantom of the Opera Part 11
posted by KowalskiTheLich
Kowalski quickly hopped down various branches and out of the tree as quickly as possible; he was sure that some animals, almost certainly the other penguins, would be scaling the tree in minutes in order to see what had caused the ‘disturbance’. As Skipper tried to calm the crowd, Kowalski waited behind the tree for a bit to make sure he was telling them of his demise. When he was satisfied, Kowalski slipped away from the tree as silently as possible and dashed behind a bench, waited until he was positive none of the animals were looking in his direction, then ran until he reached the nearest...
continue reading...
2
Phantom of the Opera Part 2
posted by KowalskiTheLich
Three days passed and Skipper finally decided that the late night training exercises were not doing anyone any good. No one really knew why he had come to this conclusion, but perhaps he thought it was affecting Kowalski’s mind, as Kowalski had changed throughout the last three days.

Kowalski used to hate music and generally only tolerated it if it was soft and not repetitive and annoying. Now, he already listened to every record the penguins owned and even played them while he was fiddling with an invention. On day three, he finally packed up all of his inventions and threw them into a corner,...
continue reading...
1
Flightless Lust: Chapter Ten
posted by Cornflak 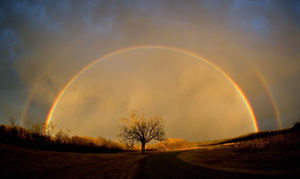 Tonight, Skipper decided to avert our attention from the gloomy situation by screening a variety of films. The majority of which included documentaries of different sorts of animals. Skipper seemed to have skipped the penguins’ film. I can’t blame him. The contents of that video were horrid beyond belief. Anyway, Rico appears to be well. I wouldn’t be surprised if he has already started to feel at home with Marlene. I can’t very well say the same for me, though. I miss him. But, I’ve also discovered something about our relationship. I admit that my actions towards him...
continue reading... 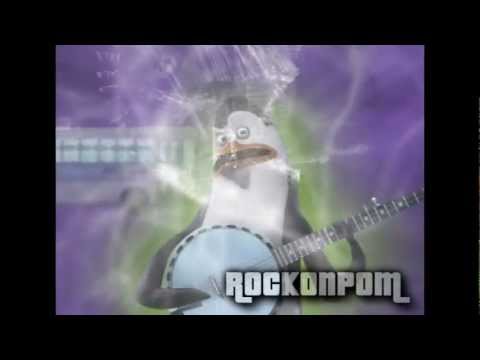 6
Kowalski & Marlene- Somebody That I Use To Know
added by RockOnPenguin
And video I made for the PoM MV Week :) Hope you enjoy!
video
penguins of madagascar
kowalski
marlene 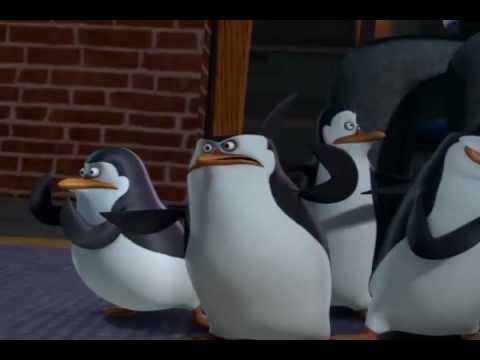 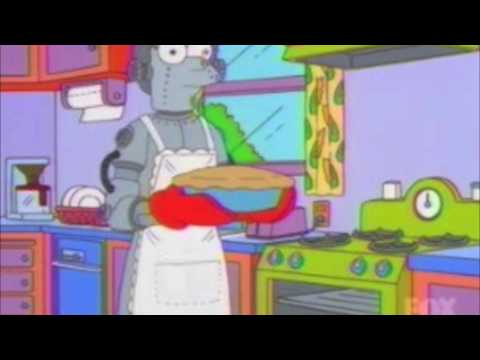 3
A video that gives me confidence as a fanguin about POM
added by mostar1219
This is something I found about what happened during the Simpsons and what will happen soon. Apparently, someone was very confident about "The Simpsons" being never ending and, as a fanguin, I feel the same way about POM. POM SHOULD NEVER END!!!
video
pom support
simpsons
past and future

7
Scientific Notations =)
added by Lt_Kowalski
This is another video I have created myself on Youtube as a Search Story! Enjoy! ^-^
video
science
kowalski
penguins of madagascar 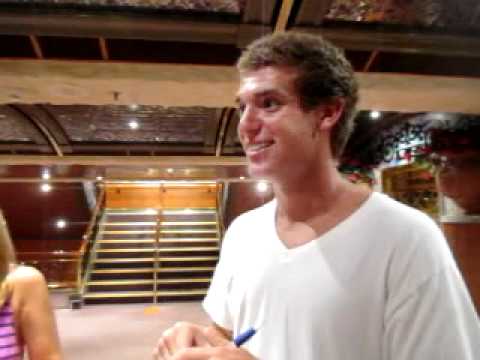 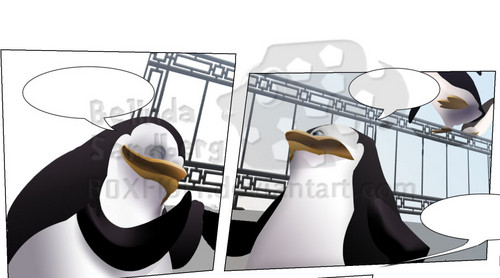 6
Work in progress
added by B0XFISH
Source: Me 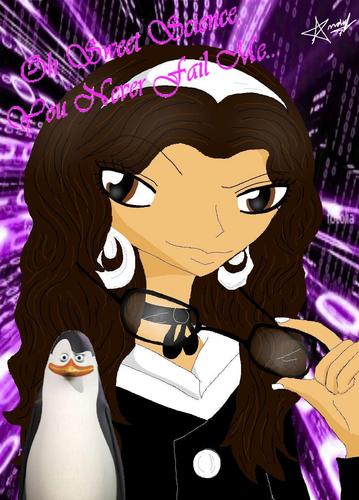 2
Kowalski and his Humanized+Female Version!!! (again...)
added by mexicanpenguin
Source: mexicanpenguin
1
The Good, the Bad, the Dangerous, chapter 6
posted by queenpalm
Sorry it took so long, I've been busy!

I kept on looking. I used my ears to try to hear them. Lemurs have a great hearing, or at least I have pretty good hearing. Ivy, on the other hand has great hearing. And dogs, and-
Uh! Got to find them!
The wind blows over my fur. I stand it and continue to walk on, searching.
Sudden thought, I would look cool with an earring.
Not now! Find!
I hear Rico calling so I run and find him. He just wanted us to get back together. We shouldn't be away from each other in a situation like this! You decide if that was sarcasm.
I hear a scream. Trees don't scream, do they?...
continue reading...
6
The mystery of the sleeping otter part 2
posted by skipperluvs
S:Skipper; K:Kowalski; P: Private; R: Rico; M:Marlene; J: Julien; Mau: Maurice; Mort:Mort. A: Alice

Alice breaks the bottle against the top of the cage and the glass shatters everywhere. She places the knife right in front of the cage door. She opens the cage.

A: Now you can get out! Let’s see if you are smart enough!!!

She stares at them and waits.

S: We aren’t gonna get out like this! Rico!
R: Blaghhh (he pukes a handglider and they all hold on to some ones leg. Alice watches with fury)
A: You aren’t off the hook that easy! And I guess you are wondering what happened to your little...
continue reading...
2
The Mystery of the Sleeping Otter
posted by skipperluvs
S:Skipper; K:Kowalski; P: Private; R: Rico; M:Marlene; J: Julien; Mau: Maurice; Mort:Mort. A: Alice

The penguins are at the table discussing a new fight routine. It is a cold winter night and every animal of every species is sleeping in their cozy habitats. All was quiet…All…

P: Maybe I could do a little hypnotizing dance!!! Then you guys could tell them nicely to leave us alone :)
S: Private, You don’t have to be nice to everyone!!! What if we some freak captured us right now!!!

Rico stands up and makes punch noises as he puts private in a cage. 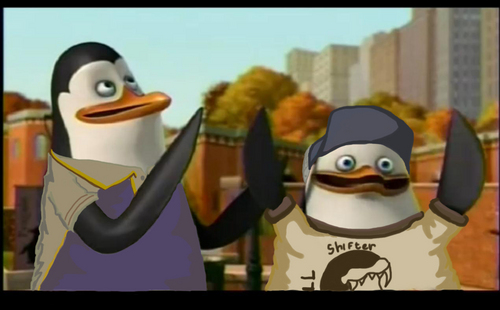 4
kowalski and private as coach and ellis
added by Blue_Vanilla
Source: edited by me with photoshop 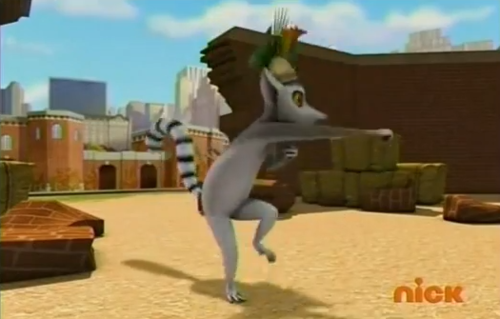 6
My Own Self Search
added by Lt_Kowalski
Yep! That's me alright eheheh..
video
kowalski
penguins of madagascar 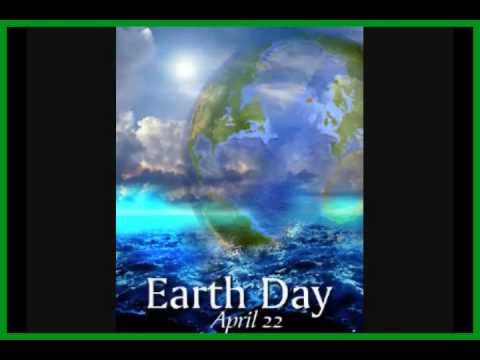 5
✿ [SP. MV] for EARTH DAY: 'One Day Too Late' ✿
added by yokaisummoner
SONG: "One Day 2late" by Sillet, vid info at link Now, I wouldn't normally post a holiday tribute in this club, but I did use some POM clips...so I figured why not... ENJOY!
video
earth day
penguins of madagascar
(nari's pom mv's)

6
My first PoM GIF = Le fail XD
added by dsprtpenguin
Source: PS CS3, me and for my bro who got the photos