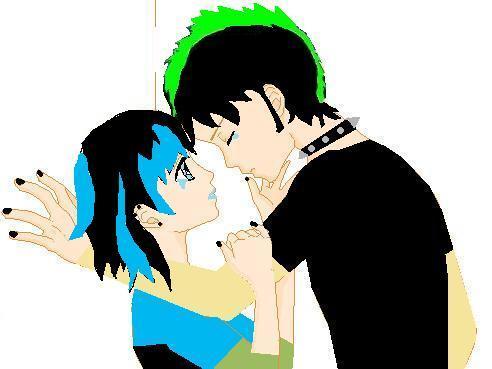 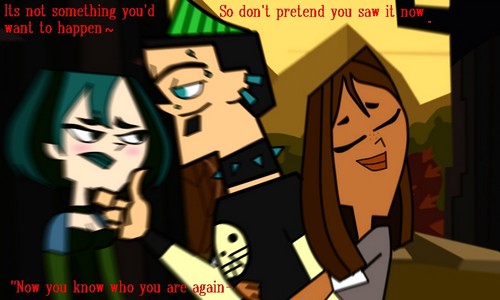 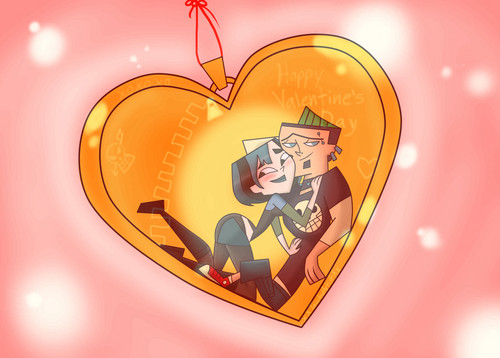 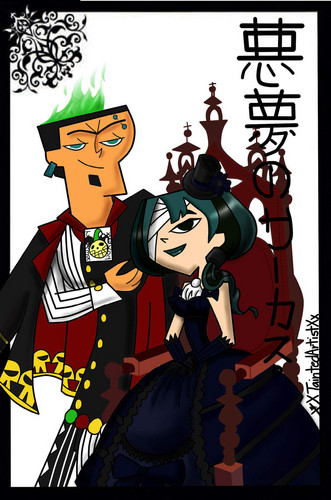 2
The Joker and his Zombie bride
added by iDxG101
Source: xxTaintedArtistxx 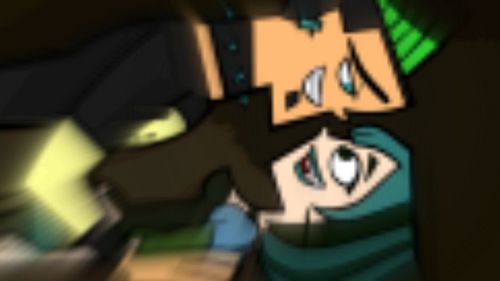 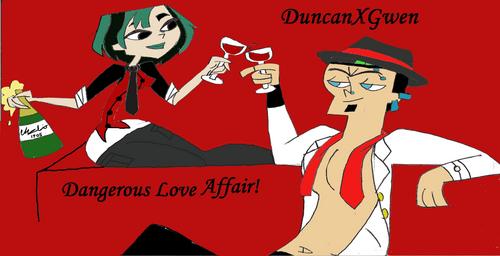 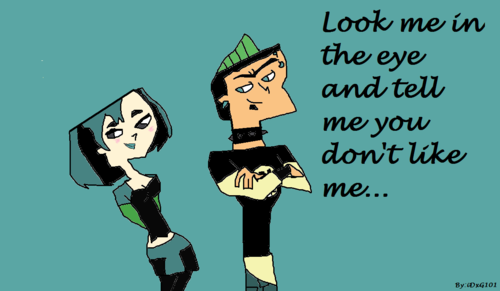 Look me in the eye and tell me you don't like me
added by iDxG101
Source: iDxG101
The new girl who changed my life
posted by FANOGWEN
(Duncan's pov)
So there's this new girl at our school and every one is judging her by the way she looks. I think it's just bull. This school is about the way you look and talk rather than there smarts. I'm gonna go talk to her.
(Gwen's pov)
This school sucks ****. Everyone here treats me horribly. It sickens me. Oh great here comes another kid. He looks pretty cool.
(no ones pov)
Duncan:hi. Gwen:hey. Duncan:I'm Duncan. Gwen:Gwen. Duncan:cool,so how u liken it here? Gwen:are you kidded me your the only one who hasn't insulted me. Duncan:yea sorry everyone has been acting like douches. Gwen:thanks...
continue reading...
2
DxG Without you part 2
posted by trentgwenfan1
with , Dncan, Brighette and Leshawna
Leshawna: FINALLY YOU GOT HERE DUNCAN!
Duncan: i got here as fast as i coould
Leshawna: ok fine but what is this i here about you going to millatray school!
Duncan: i got in huge troible and my dad was super ticked off and he told me he was sending me there
Brighette: do you know for how long
Duncan: i don't know
Brighette: just try to make him not let you go
Duncan: hava you meat my dad!
Leshawna: just aleast try
Duncan: ok i will... wears Gwen
Leshawna: in the other room
Duncan: ok *goes in the other room*
with Duncan and Gwen
Duncan: Gwen are you ok
Gwen: not really...
continue reading...
1
DxG without you part 1
posted by trentgwenfan1
This is my first ever DxG fanfic ever and my stories useally are in script mode


*with Duncan*
Duncan: THIS ISN'T FAIR!
Duncan's dad: yes it is Duncan you broke the law once again!
Duncan: WHAT DID I DO ALL I DID WAS BREAK CERFEW THAT ISN'T A LAW!
Duncan's dad: i don't care you live under my roof my house my rules!
Duncan: hey i thought they were laws becuase you decided to TAKE OVER MY LIFE!!
Duncan's dad: do i have to remind you what you did last night!
Duncan: SURE THAT S WHAT I WANT TO KNOW!!
Duncan's dad: OK YOU AND YOUR FRIENDS WENT INTO A 21 OR OLDER BAR!!!
Duncan: SO i didn't drink anything!...
continue reading...
Total Drama Road Trip Episode 2: All That Glitters Aint' Golden
posted by NeonInfernoLord

Scene opens up showing Chris standing in front of the tour bus. In the background is the Golden Gate Bridge with many cars speeding to and fro on it. “Last time on Total Drama Road Trip. The 12 contestants got to arrive and explore the bus that will undoubtedly cause them all the suffering in the course of the season.” Scene shows them all getting chased into the bus by the bulldozer and Morgyn getting crushed by the walls closing in. “The teams were made, some getting along far more than others.” Scene shows The Tumbling Weeds all arguing with one another. “Well, all in all, I can...
continue reading...
Total Drama Final Destination 2: Dead Reckoning Part 4
posted by NeonInfernoLord

“So he died basically?” Duncan says as him, Cody, Gwen, and Lillyth sit in front of a coffee shop.

“Yes! It was like, out of nowhere.” Lillyth says holding her head as she leans against the coffee table. Cody holds his chin nervously sitting back on his chair.

“And I’ve heard everyone around school talking about some girl that died at Chris’s party too. I don’t know it may be just a coincidence.” Lillyth says as she takes a sip of coffee and sighs as the wind blows by several leaves from the ground.

The gang had now arrived at the celebration. Cody was frantically searching around for danger as he stayed away from all the grills, sharp fences, and the cords around him. By now the oil spilled earlier had soaked into the soil and around the field already.

“Man, I can’t believe we’re finally leaving this hellhold.” Duncan says putting an arm around Gwen as they walked.

It feels so weird being in college after three years of being on a reality TV show, so much has happened.I've made best friends, fell in love and went on a tour around the world while traveling in first class most of the time, I even won thousands of bucks! I was nervously waiting at my bus stop with bridgette and leshawna I don't know what I'd do without them! It was completley silent until the bus got there and then we all dragged our bags behind us onto the bus and thats when I saw Duncan! He was sitting the back of the bus with Geoff and DJ. Inside I was...
continue reading...
duncan and gwen 12 last parttt
posted by colecutegirl 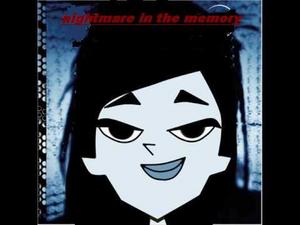 
Amy lee: hey gwen that was brilliant.
gwen: oh my holy shit Its amy lee!!! wow i love your music
amy: glad you do i came here as a guest star and to sign a record deal to the winner.
gwen: woah awsome!

*duncan turns around and sees amy.
duncan: omfg amy lee!.
gwen: yeah i know right.
amy: so how would you gwen like to become famous!
gwen: that would be really cool!

a few months later.
gwen and duncan are both now 19

gwen and duncan come back from a concert her and duncan live together now...
continue reading...
DxG how they met part 1
posted by colecutegirl

gwens new lok(umm 1st ever makeovr by me)
ok my first article ever tell me if its sh!t lol so this is duncan gwens and trents pov spz all u dxc fans lolz plz comment f i should make more

'dunkie!!' courtney sreeched and ran to me.'hey princess' i replied god she had to
make me call her that >:(First day of school would probably suck as usual or so i thought.
(wow ducan thinks!!)Then over courtneys
shoulder i saw the hottest goth chic ever.
she was wearing a black skirt with a dak purple spaghettisrap top and stdded boots her hair was down to her waist and had 2 purple streaks in she had a nose stud too. wow!

I was awakened once again, but this time it wasn't by a bullhorn, it was by an argument. I crawled down the ladder and put my clothes on as I saw Courtney and Heather going at it.

"You've had the thing for three days! Give it up!" Heather screamed. The laptop. I had completely forgotten about it after the incident with Cody interrupting Duncan and I.

"It's not like anyone's been complaining about it!" Courtney defended herself.

"Now I'm complaining! So give it!" Heather demanded. I was pulling my shirts over my head, so I didn't hear what...
continue reading...
D and G (Chapter 1)
posted by HappyBunnyGirl
Chapter 1
[Gwen's POV]
Sixth season of Total Drama.
I give up.
I tried my hardest to win. I even came in second place. Last season, I was in third.
It was a stupid distraction, but at least Courtney didn't win.
She caused my loss last season.
She kissed Duncan.

Flashback
"Go Gwen!" Cody shouted. The final three challenge was a race to the top of the 'haunted' house. We got to bring one person to help us, and of course I chose my boyfriend, Duncan.
Courtney chose Trent, thinking I still like him. I don't.
And the winner, Noah, chose Heather.

I lost Duncan when he fell into a hole. Chris told us to watch...
continue reading...
1
Chapter 1 .Rain !
posted by nothing-strange 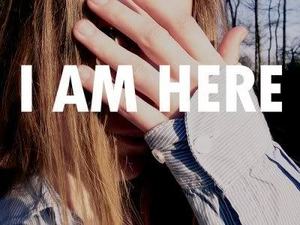 Gwen's point of view :
Landscape carpeted in emerald, clouds pass like grazing sheep on azure pastures,red birds carelessly visit their blue and yellow neighbors, flaunting their amiable community before the lonely hawk.Dragonflies landing on outstretched fingers,
and catching mosquitoes over the pond.
Wake up my friend .This-is-reality .
I was sitting around a campfire ,with the rest of the campers .I was shaking .My pale skin was trying to stay calm in this situations .It was total drama reunion .The silent freaked me out .Nobody sad anything .Everybody was staring at me with tired faces .We...
continue reading...
More Cards
1234567891011