over a year ago katie15 said…

"I wanted it to be real. I'm trusting you. Don't make me regret it." -Damon Salvatore.

over a year ago Sunbathe said…
"Vampires can't procreate... though we love to try." ~Damon Salvatore

over a year ago mariafan said…

Damon: "Somewhere along the way, you decided I was worth saving. I wanted to thank you for that."

over a year ago edwardsgirlxx said…

"I met a girl, we talked, it was epic. Then the sun came up, and reality set in, all this is reality." - Stefan Salvatore

over a year ago ilovebadboys said…
`We choose our own path. Our values and our actions, they define who we are` - Stefan Salvatore

over a year ago DaniKatZ said…

Damon:"No I will not go in your bedroom with you!"

over a year ago energizerbunny said…
Damon: That's for me to know and for you to... dot dot dot.

over a year ago Emsalee12 said…
'Today has been a no-good, very-bad day.' - Damon Salvatore

over a year ago bionsi said…

Damon: You're dead, dude. Get over it.

Elena: Dear Diary: Today will be different. It has to be. I will smile and it will be believable. My smile will say, 'I'm fine. Thank you. Yes. Much better.' I will no longer be the girl who lost her parents. I will start fresh. Be someone new. It's the only way I'll make it through.

over a year ago willow96 said…

over a year ago Immortal_Kiss said…

Damon: Now that I have your attention, listen up. You do not come into my town - threaten people that I care about. Going after Elena? Bad move. You leave her alone or I will rip you to bits because I do believe in killing the messenger. You know why? Because it sends a message. Katherine wants something from me? You tell that little bitch to come get it herself.

Round 10 starts now! Get your Gleek on!

over a year ago mdigs73 said…
can i join?

Sue: "Oh, hey Will. I thought I smelled cookies wafting from the ovens of the little elves who live in your hair."

over a year ago bionsi said…

Kurt: Oh, Bambi! I cried so hard when those hunters shot your mommy.

over a year ago oldmovie said…

Rachel: Being a part of something special makes you special right?

over a year ago energizerbunny said…

Sue Sylvester: I will go to the animal shelter and get you a kitty cat. I will let you fall in love with that kitty cat. And then on some dark, cold night I will steal away into your home and punch you in the face!

over a year ago 0oSquirto0 said…
Brittany: I've been here since first period. Had a cold. I took all my antibiotics at the same time and now I can't remember how to leave.

over a year ago spikes_girl said…
"Did you know that dolphins are just gay sharks?" - Brittany

over a year ago VMars4ever said…
Round 11 starts now! Post your Bones quote below!

Don't forget to vote for round 10 link

over a year ago energizerbunny said…

over a year ago Kaydie said…

Dr. Jack Hodgins: When you love someone, you open yourself up to suffering. That's the sad truth. Maybe they'll break your heart, maybe you'll break their heart and never be able to look at yourself in the same way. Those are the risks. You see two people and you think they belong together but nothing happens. The thought of losing so much control over personal happiness is unbearable. That's the burden. Like wings, they have weight, we feel that weight on our backs, but they are a burden that lifts us. Burdens that allow us to fly.

over a year ago suu said…
Booth: "What? Do you want me to spit in my hand? We're Scully & Mulder."

over a year ago dusica426 said…

over a year ago natulle said…

SO hard to pick ONE! There's so many good ones! Especially Angela quotes! Here's mine:
.
[after Booth saying god does not make mistakes] Angela: I don't know - putting testicles on the outside doesn't seem like such a good idea

over a year ago ORi_4EvEr_Y0ung said…
this is sooo damn hard. but anyway, I adore this one, so here we go...

Booth: Listen Bones ... you got to be really careful in that Indonesian jungle, okay?
Brennan: Booth, in a week you're going to a war zone. Please don't be hero. Please, just ... don't be you.

over a year ago jelenabones said…

Zack: This is the type of situation where someone says, "Oh my god."
Hodgins: Pretend you're a person and say it.
Zack: Oh my god.


That one was hard.And i love these scene...♥...Hodgins and Zack rock..

over a year ago Eirinaki_b_13 said…

Booth : Seeing someone across a crowded room, eyes meeting, that old black magic gets you in its spell?
I love that quote! It reminds me of the first time B&B met in the 100th episode!

over a year ago VampGirl151 said…

Dr. Lance Sweets: What part of your head hurts?
Special Agent Seeley Booth: The part above my shoulders.

over a year ago VMars4ever said…
Round 12 starts now! Post your Angel quote below!

Don't forget to vote for round 11 link

over a year ago Mcc1 said…

Doyle: I don't see Angel putting on tights. ...Oh, now I do and it's really disturbing.

SPIKE : It’s bollocks, Angel ! It’s your brand of bollocks from the first to last.
ANGEL : No, you can’t ever see the big picture. You can’t see any picture !
SPIKE : I am talking about something primal. Right ? Savagery. Brutal animal instinct.
ANGEL : And that wins out every time with you. You know, the human race has evolved, Spike !
SPIKE : Oh, into a bunch of namby-pamby, self-analyzing wankers who could never hope to-
ANGEL : We’re bigger. We’re smarter. Plus, there’s a thing called teamwork, not to mention the superstitious terror of your pure aggressors !
SPIKE : You just want it to be the way you want it to be.
ANGEL : (yelling) It’s not about what I want !
WESLEY : (arriving) Sorry. Is this something we should all be discussing ?
ANGEL : (embarrassed) No.
WESLEY : It just...sounds a little serious.
ANGEL : It was mostly...theoretical. We...
SPIKE : We were just working out a b- Look, if cavemen and astronauts got into a fight, who would win ?
(he crosses his arms and looks expectantly at Wes)
WESLEY : Ah. You’ve been yelling at each other for 40 minutes about this ?
(they both look embarrassed. Wesley considers...)
WESLEY : Do the astronauts have weapons ?
ANGEL & SPIKE : (simultaneously) No.

It's a long one, I know, but it's one of my favourites!

over a year ago AcidBanter said…

Doyle: "If it's a fight they want...can't someone else give it to them?" 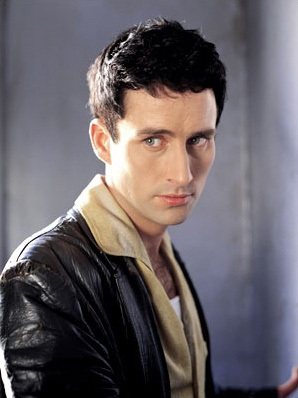 over a year ago MissMorganPryce said…
Its a tie between:

CORDELIA:Remember how I said, "Let's not have your department looking for those symbols I saw in my vision. Let's do this like we used to, you and me cracking the books"?
WESLEY:Yes.
CORDELIA:Well, that was dumb. What'd you ever listen to me for?

WESLEY
I don't know. I think I sort of missed this. You and me and the books, kicking it old school, as they say.
And I never will again.

Lilah: Flames wouldn't be eternal if they actually consumed anything. But it means something that you tried.

Round 13 starts now! Post your How I Met Your Mother quotes below!

Don't forget to vote for round 12 link

over a year ago teo_rockeritza said…
Barney: It's gonna be legen-wait for it, and I hope you're not lactose intolerant 'cause the second half of that word is dary. Legendary!

over a year ago xoheartinohioxo said…
Robin: I care about you Barney. This kind of stuff... the emotional stuff. It's not your thing. I thought I'd save you the trouble.

over a year ago Klema said…
Barney: Seriously. Jesus started the whole "wait three days" thing. He waited THREE days to come back to life. It was perfect! If he had only waited ONE day, a lot of people wouldn't have even heard that he died. They'd be all, "Hey Jesus, what up?" and Jesus would probably be like, "What up? I DIED yesterday!" and then they'd be all, "Uhh, you look pretty alive to me, dude..." and then Jesus would have to explain how he was resurrected, and how it was a miracle, and then the dude would be like "Uh okayy, whatever you say, bro..." And he's not gonna come back on a SATURDAY. Everybody's busy, doing chores, workin' the loom, trimmin' the beard, NO. He waited the exact right number of days, THREE. Plus it's SUNDAY, so everyone's in church already, they're all in there "Oh no, Jesus is DEAD", then BAM! He bursts through the back door, runs up the aisle, everyone's totally psyched, and FYI, that's when he invented the high five. Three days. We wait three days to call a woman, because that's how long Jesus wants us to wait.... True story.

Round 14 starts now! Post your Gilmore Girls quotes below!

Don't forget to vote for round 13 link

over a year ago Karussss said…

over a year ago VMars4ever said…
Bump

over a year ago othpop6668 said…
Lorelai: Oy with the poodles already
Something to say? Sign in with one of these options:
Log in to Fanpop! Not yet registered? Create a new Fanpop account!