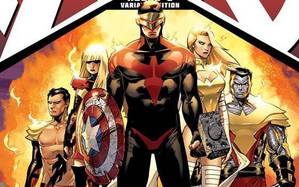 A little bit of background before we begin. For those who may not know, and without going into too much AvX detail, the Phoenix Five (which is going to be abbreviated as P5) was created for the Avengers vs. X-men crossover event a few years ago. The P5 consisted of Namor the Sub-mariner, Piotr Rasputin/Colossus, Illyana Rasputina/Magik, Emma Frost, and Scott Summers/Cyclops. The P5 was created by Iron Man splitting the Phoenix Force which then possessed them. One by one, they would start losing their control, and their portion of Phoenix, until only one would remain with the full force of Phoenix.

Despite the ridiculous nature of the P5, which is still the subject of much head shaking from many a fan of X, the costumes in particular were especially notorious. Today we will be counting down the P5 costumes from worst to best. Although the P5 originated in the comics, most of my images for the article are actually from the Marvel: Avengers Alliance game, as it is not only difficult to find decent images of these costumes in their entirety straight from the comics, but M:AA did a wonderful job creating these costumes in the game. Let's get started.

Bet you didn't think you'd be seeing an honorable mention on this article, eh?

As I previously stated, I will be using images from M:AA today for my article. However, Namor was not a character in the game when they decided to do the Avengers vs. X-men special operation. 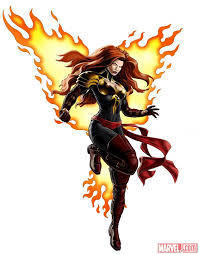 I really, really wanted to put this one on the list. It would have definitely been one of the top, if not on the top. I absolutely love this costume. The color scheme is gorgeous and works on her better than I think it did on any of the others (it's gotta be the hair). The style is very reminiscent of her previous Phoenix costumes, particularly the Dark Phoenix look. She still has the thigh boots, gloves, and sash.

I'm not a huge fan of the chest cut-out, but given it's the only skin other than her face and thumbs we see, it's barely noticeable. I also don't understand what's happening with the gloves. The gloves look great, but why are her thumbs bared? Even though you don't notice it unless you really look, once you do, it looks silly.

I didn't want to start out with him on the bottom because I feel like it was expected, but I couldn't stop myself. 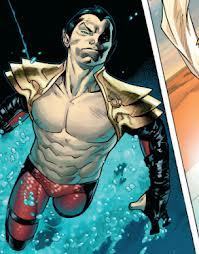 Namor as one of the Phoenix Five
Though the red and black pants don't look bad by themselves, I'm trying to understand if they're pants with sock-like feet attached (like pajamas) or are there boots there? The jacket/gloves have that same feeling to them, like they're attached. The fact that he isn't wearing a shirt wouldn't bother me if it didn't look like a baby's onesie that someone said, "Wait! Let's cut out where his shirt would go because he has to show off his chest." Unfortunately, it ends up ruining the whole piece, leaving much to be desired.

Like Namor, Colossus has always shown a remarkable propensity for revealing costumes, so he doesn't get dinged for that. Unfortunately, like Namor, it doesn't help his case much either. Before I get into the costume itself, I just wanted to bring this up. Doesn't this look remarkably similar in style to his first costume?

Colossus as one of the Phoenix Five 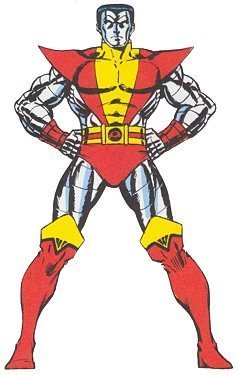 Colossus in his original costume
Put a few extra scraps of fabric on the sides, a cut-out on the chest, and flap of fabric in front and you've got the same costume almost four decades later. The color scheme is even the same, if the shading is slightly different.

His costume also looks almost like the male version of Emma's P5 costume. We'll get more on hers in a minute.

On the costume itself, starting up on top, the collar of the costume almost looks like he flicked it up. It looks binding and uncomfortable, being so far up on the back of his neck, especially when his chest is so uncovered. On some close-ups of this costume, there is actually a piece of fabric on the collar, like the collar is meant to close. That is very clearly not going to happen.

The straps everywhere make it seem as if it doesn't fit well enough to stay on his body, further upheld by looking at his boots, on which the top of his boots are almost consistently shown away from his body, only held there by the straps around the kneecap, which look painful. His entire costume looks uncomfortable. Thumbs down from the girl sitting in comfy sweats and a baggy T-shirt.

Here we get into the ones that I like more than I hate them. 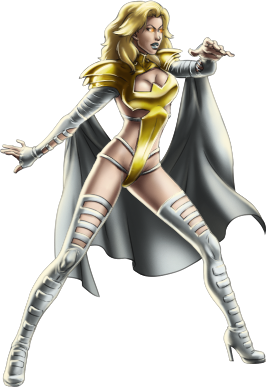 Emma Frost as one of the Phoenix Five
Second, I would kill to have legs that look that good in boots that amazing. Third, I also like the long gloves, even though they go too far up on her shoulders to be considered "gloves".

As you may have guessed, I don't tend to deduct points from costumes in terms of "skimpiness" (for lack of a better word) as long as it doesn't hinder their abilities and they show a proficiency for fighting in such costumes for a consistent period of time. Just like the previous two, Emma is one of these. I would, however, like to point out that she is wearing a swimsuit. Don't believe me? Just watch.

Again, the color scheme works wonderfully. Something about black on red...

I like the overall look of his outfit. The damage is in the details. I'm don't like the weird red piece in front of his crotch. It doesn't serve any purpose and looks ridiculous. He also suffers from the gloves covering everything except the thumbs. I don't understand this! 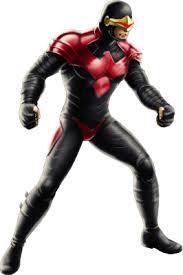 Cyclops as one of the Phoenix Five
Do he and Jean text often enough to need their thumbs free?

The biggest criticism I hear about this outfit is with the visor. It is fashioned to look like a beak. Oddly, I enjoy this little bit. I noticed something was off about it when I first saw the outfit, but it took me a bit to figure out what it was. It doesn't seem to take away from the outfit. I also like how they didn't give him a weird cutout above the Phoenix symbol, leaving him almost entirely covered. It works with him, someone who seems to be so intensely private.

That only leaves one member of the P5 left to claim the top spot, and that person is...

Taking away her costumes from the last few years, Magik's costume history has shown to be sexy without a penchant for showing much skin. This is only more proof of that. She shows off her wonderful legs, but not so much. 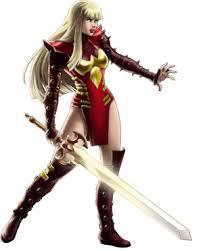 Magik as one of the Phoenix Five
Her torso and arms are completely covered, and the spikes on the gloves and boots hint to her more devilish side. The subdued Phoenix on her chest is a wonderful embellishment, allowing for the costume to be more about Magik than about Phoenix. The large, pointed shoulder pads only add to the look. I love how the gloves are finger-(and palm)-less, choosing the best of both worlds.

Overall, her costume has a guardian or soldier feel to it, leaving enough space for it to be clearly Phoenix, but even more room to be hers.
X-Rose17 likes this
Alycat4848 These costumes always made me wonder when Phoenix became synonymous with revealing. I mean the original Phoenix costume is like coverage from neck to toe.
x-menobsessed26 Given how many other characters have had unnecessarily revealing wardrobes over the years, it's only fitting that eventually the Phoenix attire would see its own share of revealing incarnations. The MAA costume for Jean and Cyclops' P5 costume still cover almost everything, as fits with their pasts and their personalities, which tend to run on the more restrained side. Emma doesn't seem able to have a costume in which at least 50% of her skin is showing, usually erring toward more, so it only seems natural that her costume would be more...liberal. As for the other three, they seem to be closer to their normal costume line-up, which is fine. The only piece of skin showing that really jiggles my puffs are those damn thumb holes. WHY?
Alycat4848 You know I think Emma's bothers me the most. Not because it's revealing because that's just who she is, but the metal crotch has to chafe something horrible.
x-menobsessed26 I'm not sure which would hurt worse. The metal in the crotch or the piece pointing up between her breasts. I mean, I can't speak for a comic character whose clothes constantly seem to defy the laws of physics, but neither of those options sound particularly pleasant.
Alycat4848 I feel like you've made poor decisions when your costume hurts you more than super villains. 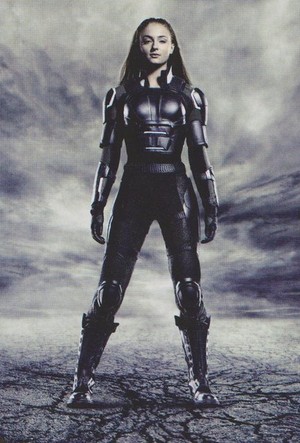 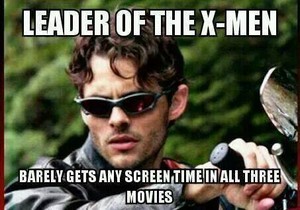 Leader of the X-men...
added by x-menobsessed26 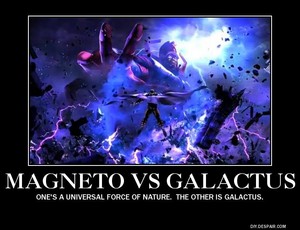 Magneto Vs. Galactus
added by x-menobsessed26 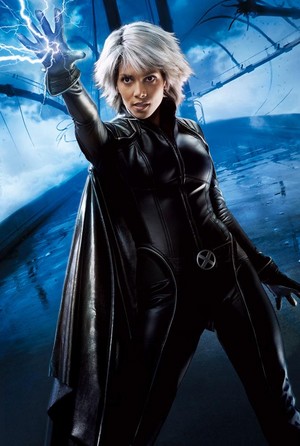 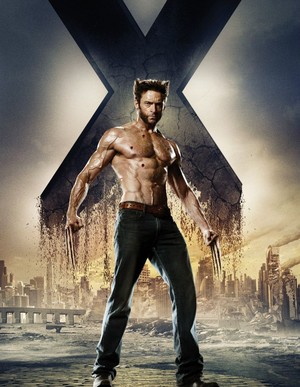 X-Men: Days of Future Past - New Poster
added by 3xZ 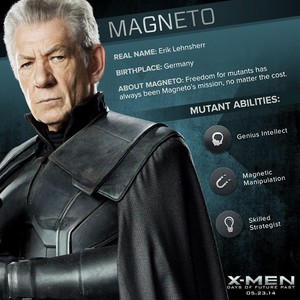 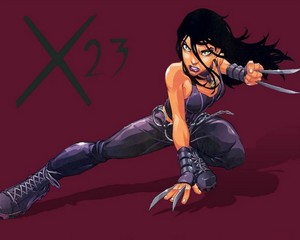 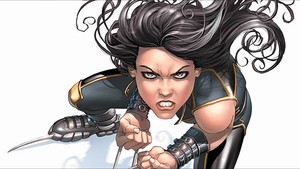 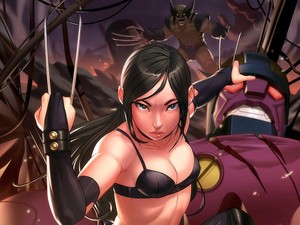 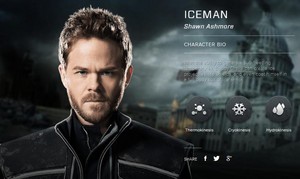 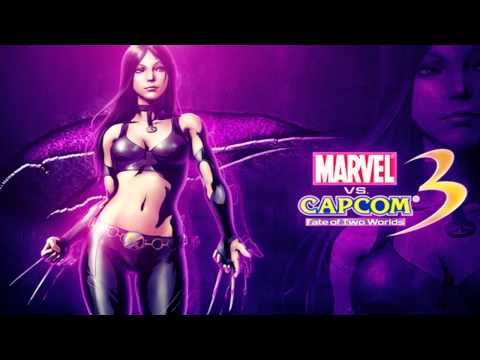 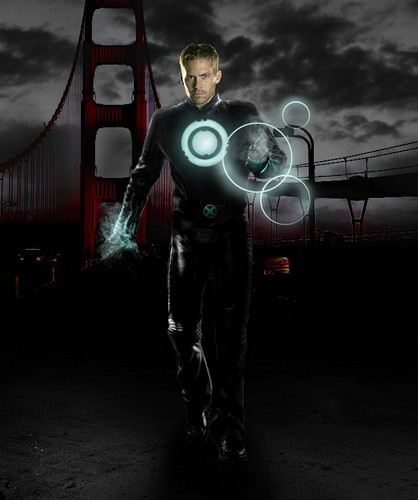 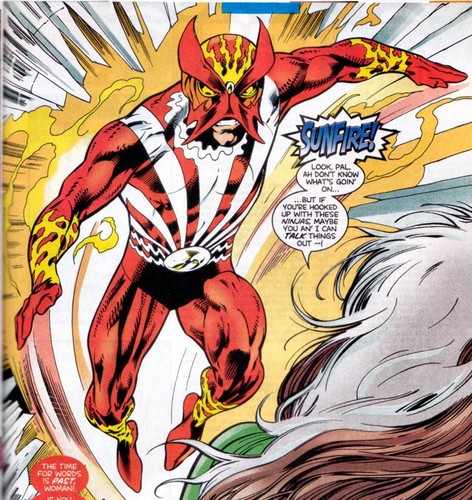 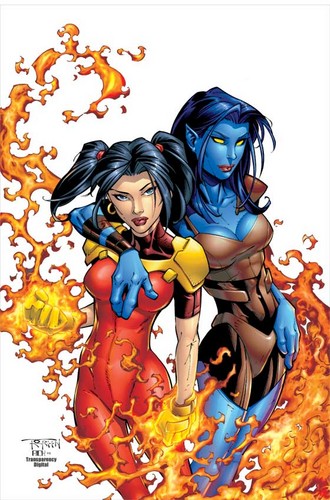 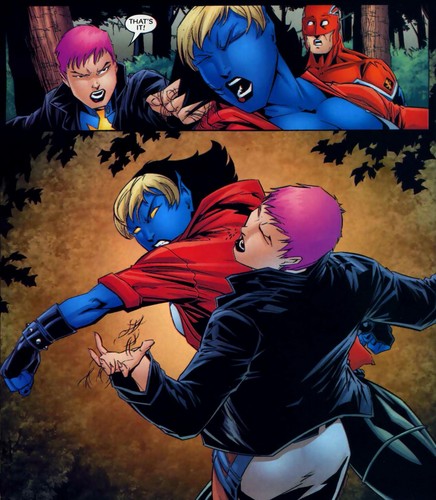 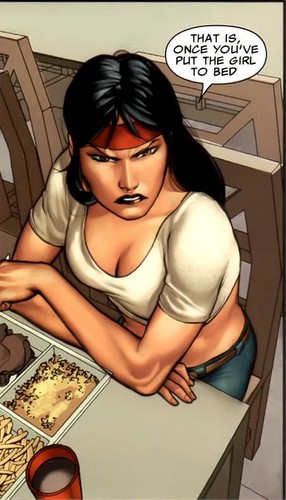 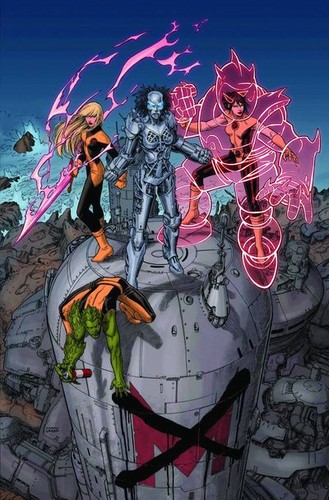