Though Uncle Fester is a regular on the TV series, Charles Addams' prototype for Fester in the New Yorker cartoons was almost exclusively solitary, never shown indoors with the other family (except once as a painted portrait), and only once outdoors with the children (going fishing with dynamite).


With the start of the TV series, The New Yorker magazine stopped running any Addams-Family-themed cartoons from Charles Addams until just prior to his death in 1988, although a few familiar characters were allowed solitary appearances (the prototypes for Pugsley, Cousin Itt, and Fester).


Cousin Itt is the only character whose name was carried over from the original New Yorker cartoons, where he was just "It".


Gomez was a lawyer.


The Addamses lived in a Victorian Mansion at 000 Cemetery Lane.


This show and its rival series, "The Munsters" (1964), both debuted within a week of one another in September 1964. At the end of that year's TV season, The Munsters ranked #18 in the Nielsens, with a rating of 24.7, while this show came in at #23, with a 23.9 rating. At the time, Nielsens indicated what percentage of American TV households tuned in to any given program. By the end of the following year, both series were canceled.


It took Carolyn Jones two hours every day to put on Morticia's make-up. Topping it all off, she wore a wig made of human hair.


Cousin Itt's voice was done by producer Nat Perrin, who recited gibberish into a tape recorder and played it back at a higher speed.


Charles Addams never named his characters, but he had to come up with names for the characters on the TV show (it was one of the few contributions he made to the series). Within a week he decided on all of them - except for Mr. Addams, who almost wound up being called Repelli (for "repellent") instead of Gomez.


Thing, the disembodied hand/arm limb, was usually played by Ted Cassidy. When Lurch had to be on camera at the same time as Thing, however, associate producer Jack Voglin lent his hand. A third actor also played Thing on occasion, but his identity is not known.


Thing was usually a right hand. Ted Cassidy (Lurch) occasionally used his left hand just to see if anybody would notice. Thing also had an arm, which was seen when it reached outside for something while in its box.


The Addamses' version of a cuckoo clock was a wolverine that popped out and growled the hours of the day.


The doorbell sound was a foghorn.


Wednesday Addams' name is a reference to the nursery rhyme that says, "Wednesday's child is full of woe."


Gomez and Morticia Addams were the first married couple on American TV implied to have a sex life.


John Astin was given the choice of two names for his character, and selected Gomez over Repelli. The son's name was originally to be Pubert, but was changed to Pugsley because Pubert sounded too sexual.


Carolyn Jones and John Astin decided to give Gomez and Morticia "a grand romance" as an antidote to the virtually asexual parents then common in television shows.


The train-crash sequence, in which the model trains collide and explode, was shot once, and that footage was used every time Gomez wrecked model trains.


Jackie Coogan was originally rejected as Uncle Fester. He went home, shaved his head, and did his own Fester makeup and costume. This won him the part.


The name of the Addamses' pet lion was "Kitty Cat".


Blucher (prounounced "Blooker") was the name of Gomez's stockbroker.


Whenever Gomez needs to know the time, he looks at both his wristwatch and his pocket watch. Each is hours different from the other but they always average to the correct time.


Cousin Itt was related to Gomez.


There was a sign in the Addams front yard that read "Beware of the Thing".


Gomez almost always read his newspaper while standing on his head.


Gomez originally was engaged to Morticia's sister, Ophelia, in a arranged marriage. A few days before the wedding, however, he met and fell in love with Morticia and wound up marrying her instead.


The occasional role of Granny Frump was played by Margaret Hamilton.


Even though Gomez would kiss Morticia up and down her arm when she spoke French or called him "bubeleh", we never saw him kiss her on the lips.


At the beginning of the series, Pugsley is eight years old and Wednesday is six years old.


The name of the city where the Addamses lived was never mentioned on the show, although it was somewhere in New York City in the cartoons.


The interior decor of the Addamses's home was inspired by the producers' first sight of the eclectic furnishings of Charles Addams' own New York City apartment, which is why it does not at all resemble the run-down bare-walls interiors seen in both the original cartoons or the movies.


According to John Astin, during his first meeting with Filmways executives concerning his possible participation in the show (with executive producer David Levy in attendance), he was originally offered the role of the Butler (Lurch), being told that the show would be centered around this character. Astin left this initial meeting with many reservations, wondering if he would have to wear stilts/lifts to portray this character, etc., and finally convinced himself that this part was just not going to work for him. The very next day, he received a call directly from Levy (who, according to Astin, had said little during the previous days' meeting), inviting him to lunch at a popular Hollywood restaurant. Over lunch, after expressing his doubts about playing the butler to Levy, Levy then offered him the role of Gomez; Astin accepted, and the focus of the show was changed.


The Addamses were the first TV family to own a home computer (a UNIVAC).


Filmways didn't want to pay singers to record the theme song, so composer Vic Mizzy triple overdubbed his own voice to simulate a trio.


Thing's Spanish name is "dedos", which translates in English to "fingers"


One of the sponsors of "The Addams Family" was Dutch Masters Cigars.


In 2007, M&M's spoofed ‘The Adams Family’ in a TV commercial introducing M&M's Dark Chocolate. The commercial re-created the opening of the sitcom, licensing the original tune, with the new M&M's dressed as The Addams Family cast. According to the firm IAG Research, this was the TV viewing public's favorite commercial during the month of April.


In the pilot, Ted Cassidy, who plays Lurch, ad-libbed the famous line, "You rang?" Originally, Lurch didn't have lines. But the line got a wave a laughter and Cassidy got more dialog.


According to the DVD commentary, Ken Weatherwax (Pugsley) was allergic to the 100% wool costumes that the costume designers provided, so his mother bought all of his costumes for him.


The Addams Family home consisted mostly of recycled sets from the movie The Unsinkable Molly Brown (1964).


The harpsichord that Lurch played was a Krupnick.


John Astin originally tried out for the part of Lurch.


Cousin Itt's voice was supplied by producer Nat Perrin, who recited gibberish into a tape recorder and then played it back at a higher speed.


Lurch got fan mail from teenage girls who insisted that he was cuter than The Beatles.


The interior of the Addams house was inspired by the real-life Manhattan apartment of Charles Addams, which contained suits of armor, an antique crossbow collection, and other oddities.
fishypup and tvfan109 like this 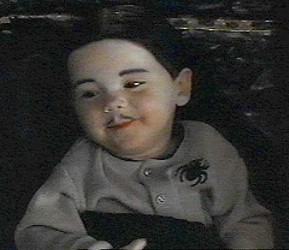 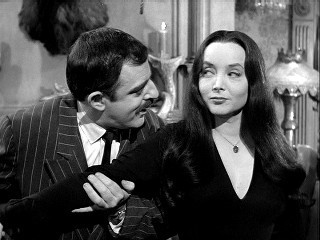 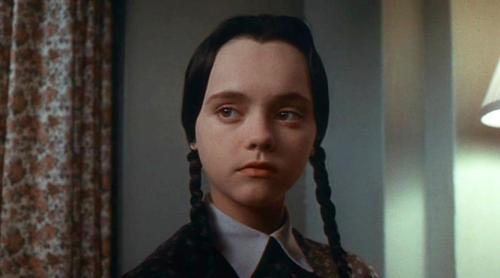 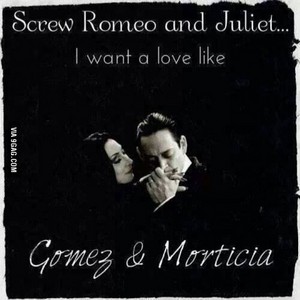 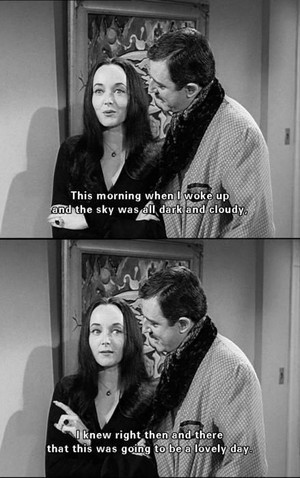 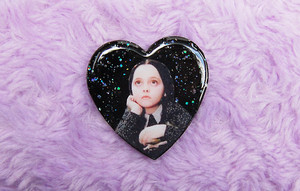 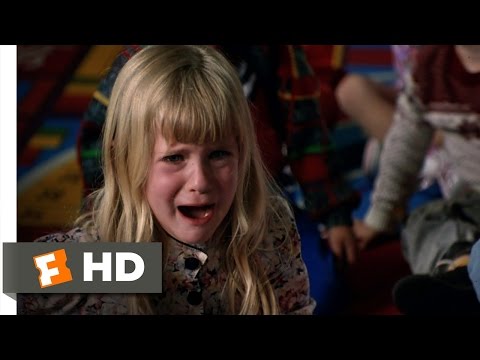 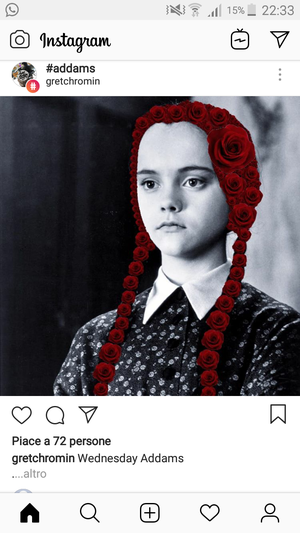 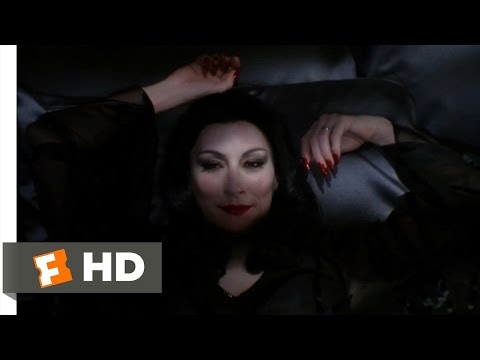 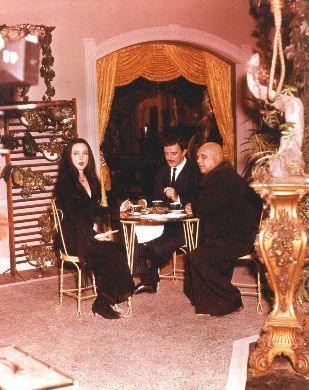 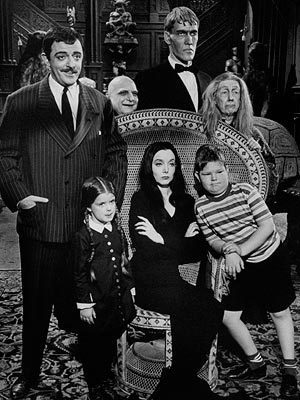 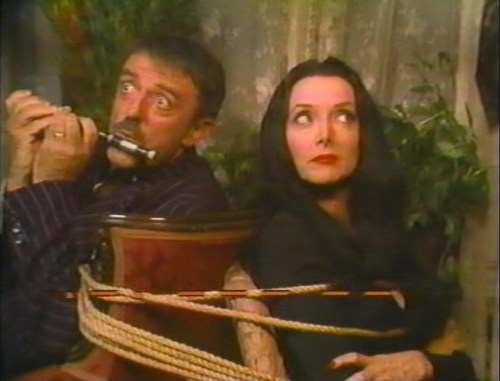 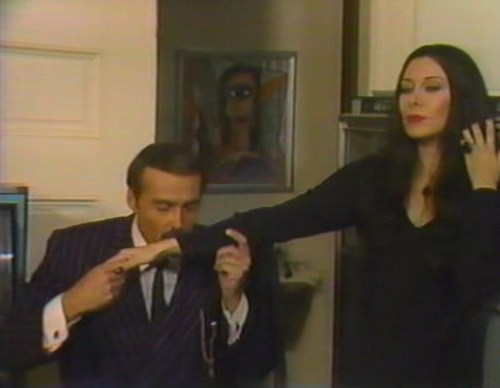 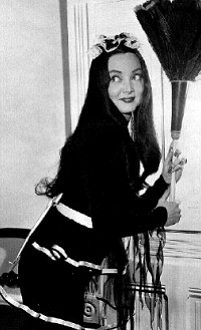