It’s the summer of 1987, and recent college grad James Brennan (Jesse Eisenberg) can't wait to embark on his dream tour of Europe. But when his parents (Wendie Malick and Jack Gilpin) announce they can no longer afford to subsidize his trip, James takes a menial job at a local amusement park. Instead of German beer, world-famous museums and cute French girls, James’ summer will now be filled with belligerent dads, stuffed pandas, and screaming kids high on cotton candy. Lucky for him, what should have been his worst summer ever turns into an amazing adventure as he discovers love in the most unlikely place with his captivating co-worker, Em (Kristen Stewart).

Kristen Stewart was introduced to worldwide audiences with her outstanding performance alongside Jodie Foster in “Panic Room.” Her most recent film, “Twilight,” was one of the most successful films of 2008 grossing over $300 million worldwide. She recently began shooting the Twilight sequel, “New Moon,” after which she will headline the Joan Jett biopic, “The Runaways,” followed by “Eclipse,” the third installment of the Twilight saga.

Here’s what the super talented Kristen Stewart had to tell us about “Adventureland” and her upcoming projects:

MoviesOnline: Kristen, can you tell me what you're wearing?

Kristen Stewart: Oh, I don't know. I would. I'm not being secretive about it. I just don't know. I just saw it and went, 'I like that.'

MoviesOnline: So a stylist didn't do this?

MoviesOnline: Is it weird to get asked fashion questions about what you’re wearing all the time?

Kristen Stewart: Yeah, it is so weird for me because it's not something that I think about a whole lot and it’s such a large aspect of that area of media. It's weird.

MoviesOnline: Did Greg [Mottola] tell you if your character was based on someone that he knew?

Kristen Stewart: I think that she was based somewhat on compiled girlfriends of his in the past, a melding of a couple of different people, failed relationships with girls who were kind of damaged, but not a specific person. So it wasn't one relationship that he had in the movie.

MoviesOnline: Did you know anyone like her growing up?

Kristen Stewart: I never met a terribly introverted and damaged girl at a theme park in the '80's.

MoviesOnline: But did you base the character on someone that you knew or could you relate to her?

Kristen Stewart: I mean, I related to her because I like characters that are written that are whole, that doesn't feel like…[where] it's easy to tell what would be right and wrong and how they would feel about something because they're very defined. It's not like they’re just a place holder. I'm not like the girl in the movie. She's a real person. So, I got all my inspiration from her. I could imagine what it would be like to not like yourself very much and not have a mom and not have a dad to reassure you and sort of be kicking it alone and feel like you're sort of smarter than everyone but no one gets it. I get all of that. Then the masochist aspects girls are good at so I can relate on that level.

MoviesOnline: What's your take on her dating such an older guy?

Kristen Stewart: I don't think she's too excited about. I think it's masochistic, like I said. It's an outlet for her and it's just something that she can go do and it's mindless and it's like she has this void and it's not necessarily being filled by that, but it's a distraction. She's not proud of it. That sounds like she probably went to school and was like, 'I'm dating this guy and he's totally cool.' She's not doing that. She's ashamed of it. She doesn't tell people about it. It's obviously not something that she's too excited about, but she keeps doing it.

MoviesOnline: Was it fun playing a character like that that’s rebellious and does that kind of thing?

Kristen Stewart: Yeah. I think that was more about her dad getting to know that she was actually a real person and not just a little girl, that your little girl is going to grow up into a woman that does things for her own good, makes her own personal choices that wouldn't necessarily coincide with his. She's a grownup now and that's hard for a dad to deal with. But I think she may have actually really liked that guy. It seemed like that funeral thing was actually genuine. She wasn't just there to piss her dad off.

MoviesOnline: Is there anything from the era of the '80's that you love?

Kristen Stewart: I like a lot of music. I like the sort of alternative music. I'm not too into 'Rock Me Amadeus'.

MoviesOnline: When you read a script, what makes you either want to do it or not?

Kristen Stewart: 'This is going to be a great movie. They are obviously going in the right direction…in choosing me.' [laughs]

MoviesOnline: What was the most fun scene that you got to shoot, the bumper cars?

Kristen Stewart: God. I didn't think that was very fun.

MoviesOnline: When you weren't shooting, did you get to play around on the rides?

Kristen Stewart: We weren't allowed to go on the rides until the end and then they stuck us on the most dangerous, rickety old ride that they had at the park and that was the one ride that we got to ride. We did it like fifteen times though.

MoviesOnline: It would be frustrating to see all these rides and not be able to play on them.

Kristen Stewart: It's especially funny though to see him [Jesse Eisenberg] on a ride because his enthusiasm is like, 'Oh, yes. That was very fun.' 'I agree. That was very enjoyable.'

MoviesOnline: You're getting ready to shoot the new 'Twilight' film. What are you most looking forward to?

Kristen Stewart: Just picking up sort of where we left off. The story, there's like a six month period where the first one ended and the second one picks up, but nothing has changed. They're at a good, solid point in their relationship. I'm interested to see him leave because that's what the first one is entirely based on, that abandoned devotion ultimate love story. Now she's going to be stripped of that and Bella is actually an interesting character on her own. Taylor Lautner is Jacob. It was under deliberation for a while so we're glad that he's doing it.

MoviesOnline: He was saying at the time that he was working out and was going to be twenty pounds heavier.

MoviesOnline: I saw a photo and he looks like he's on steroids he's so big.

Kristen Stewart: He's not on steroids.

MoviesOnline: He must've been doing some serious gym time.

MoviesOnline: Were you shocked when you saw the transformation?

Kristen Stewart: Yeah. I've seen the steady progression and I've seen him a lot since then. If I had seen Taylor who did 'Twilight' to the Taylor right now who's about to start 'New Moon', he's an entirely different person physically. I mean, it took him so much time. He's so devoted. He's amped, really excited.

MoviesOnline: I heard the third one comes out the following summer. What does that mean for you guys as actor, do you get a break in between the next one?

MoviesOnline: Are you Joan Jett?

MoviesOnline: So are you looking forward to that?

MoviesOnline: What kind of research are you doing?

Kristen Stewart: I'm just trying to immerse myself in the music scene, not in the scene, but to educate myself about it.

MoviesOnline: Has there been any question about playing Joan Jett from all these young teenage girl fans from 'Twilight'?

Kristen Stewart: Luckily they have nothing to say, yeah.

MoviesOnline: You're not concerned about that image at all because of all the young girls who follow your career?

Kristen Stewart: Joan is such a remarkable role model for any young girl. I mean, she was the first female to start a record label. If not eighteen, I think she was in her early twenties. She's an activist. She's a feminist. She's a great role model.

MoviesOnline: Are you going to be doing your own singing?

Kristen Stewart: I don't know yet, to be honest. I want to very badly but I also want it to sound right and I don't know if it'll be a combination where they lay our voices on top of each other or if it'll be just her or just me. We'll see. We'll see how able the other actors are to play the music themselves. It would be awesome. We're definitely on band practice. We're definitely going to be a group of people who can make music together. There's a lot of performance in the movie.

MoviesOnline: And Dakota Fanning is in both movies, right?

MoviesOnline: Have you worked with her before?

MoviesOnline: So you'll be spending like the next year with her basically on set?

Kristen Stewart: Yeah, absolutely. I've always loved what she's done. She's very controlled and poised. In terms of her actual work that she makes, it's always so different. She's gonna rock this. You talk about a band, she's going to have to lose herself in this because it's really pretty heavy.

MoviesOnline: Is there a sequence that you're looking forward to shooting in 'The Runaways'?

Kristen Stewart: God, yeah. There are so many iconic ones. The relationship that's really interesting is Cheri and Joan, the two front men of the band. They get tattoos together in Japan and obviously they still have those tattoos. I'm looking forward to that just because it's such a fun part of the movie. I like the big conflict. Cheri can't really handle the success, nor does she want it necessarily in that respect. Joan is very steady and self-assured and she knows this kick started her whole career. So, to watch it all fall apart and her still stand, I'm excited about that. It's a really explosive scene. Amps are kicked through and guitars are smashed.

MoviesOnline: How is it starting 'New Moon' knowing what to expect? You know now what the 'Twlight' thing is.

Kristen Stewart: It's so much easier. I mean, it's just an experience and it's realizing that it's a different world. I'm just more aware. It's easier. I'm not as freaked out by it. It's all proven to be fine and at first I was just kind of freaked out. I was scared of it.

MoviesOnline: Does that mean you can have fun with it or are you still at the point where fun is just a possibility?

Kristen Stewart: I mean, sometimes things are fun, but as long I just say what I mean and it's not entirely jumbled and I feel like some things got across. Whatever. As long as I keep doing what I like to do, then whatever happens with all this stuff is just going to happen and it's just whatever.

MoviesOnline: Are you doing a t-shirt line with Nikki (Reed)?

Kristen Stewart: Oh, yeah, we're messing around with some t-shirts, but not like a line. I mean, we're like Sharpie drawing on them. Maybe you'll see them and maybe you won't.

“Adventureland” opens in theaters on April 3rd.
fishypup likes this 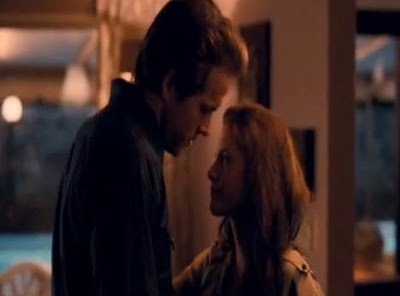 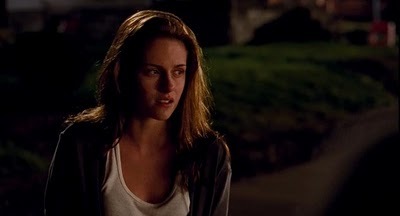 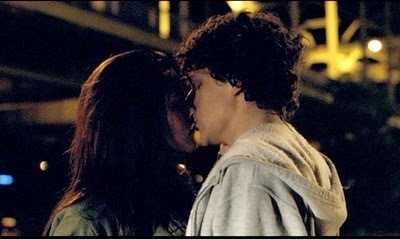 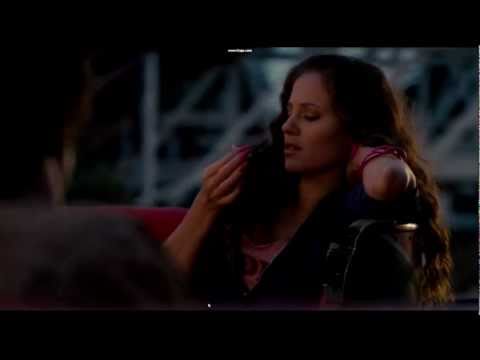 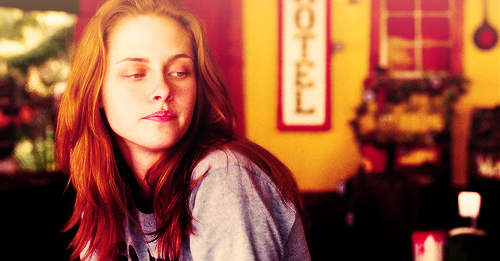 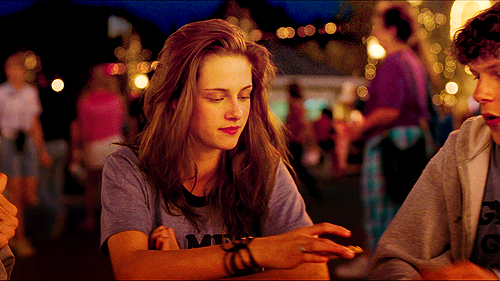 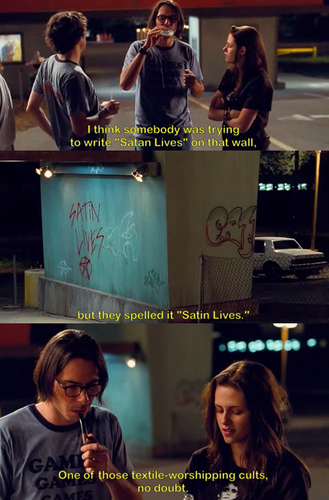 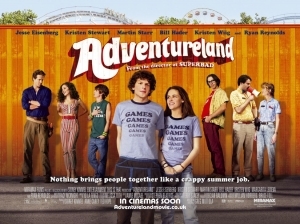 2
Crowded House - Don't Dream It's Over
added by KatiiCullen94
video

1
The Outfield - Your Love
added by KatiiCullen94
video 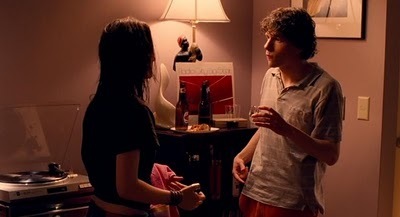