2
It's a Painful Life
posted by AlexWhittier
The vain in Pain’s head was throbbing badly as he saw the Akatsuki members fighting as usual. Sasori and Deidara were bickering about art. Hidan and Kakuzu were having a full blown fight. Tobi kept tugging on his sleeve and saying, “Leader. Leader. Leader.”

Finally Pain exploded in a fit of rage. “Shut up,” he shouted so loudly that the entire organization froze in place, “I have had it with your utter incompetence! All you do is fight with each other, fail every mission I give you, and give me stomach pains. You do all of this and I pay you for it. Sometimes I wish this foul organization didn’t even exist. It is absolutely-”.

Suddenly Pain just froze in place. Konan rushed to him. “Oh no,” she said, “Zetsu!” Zetsu emerged from the ground next to her. She whispered, “Something must be wrong with Nagato. We must get to him.” He nods and they rush to aid Nagato.

Meanwhile Nagato continued to cough up blood as he passed out. When he opened his eyes he was in a massive corridor filled with what seemed to be endless doors. Nagato asked, “Where am I?”

“This is the nexus of the multiverse,” said a voice behind Nagato, “Stand up so I can have a look at you.”

Nagato stood up and saw a fellow wearing a purple hood and cloak. “I am the Guardian of the Multiverse,” he said, “I thought I would show you a world where your organization Akatsuki didn’t exist.”

Nagato chuckled as he said, “Fine. It’ll be nice to see how ruined their lives would be. Without Akatsuki they would all be homeless S-Rank Criminals, constantly on the run with no allies to help them.”

The Guardian opened one of the doors and told Nagato to follow him in.

As they entered, Nagato saw they were at some kind of large rally in Amegakure. He looked up and saw Konan waving to the crowd. “When I return from the Kage Summit I promise you, the people of Amegakure, that I shall help renew the Prosperity Pact between the six great countries,” she said to roaring applause.

Nagato looked confused, “What on earth is she talking about?”

The Guardian explained, “In this Universe you died along with Yahiko that fateful confrontation with Hanzo. The people of Amegakure was so distraught by Hanzo’s cruelty that they overthrew his leadership and made Konan the village leader. She has since been a major advocate for world peace and helped establish the Prosperity Pact between the six great countries.”

As Konan left the stage she hugged a blue-haired little boy that ran up to her. “I’ll miss you mommy,” he said.

“I’ll miss you too sweetie, but at last you’ll still have Daddy and your pet,” Konan said. Nagato turned to see that “daddy” was Kisame and the “pet” was Samehada with a dog collar.

“Yeah,” the Guardian said, “After his village forced him to kill his comrades Kisame became disillusioned with authority. Instead of joining Akatsuki though, which doesn’t exist in this universe, he became an activist fighting against government abuse of rights. He and Konan eventually met from their mutual activism and fell in love. He has now found his new purpose in life as a stay at home dad.”

“Kisame is a dad and Samehada is a pet,” Nagato said in disbelief as the boy threw a Frisbee for Samehada to catch, “Kisame can’t even take proper care of a goldfish. I remember the goldfish got its tail stuck in a piece of coral in the fish bowl, so to get it loose he cut the tail off.”

“Yes well let us head to that Kage Summit with Konan then shall we,” The Guardian said as he waved his hand and they teleported away.

Nagato watched Konan addressing the Kages and noticed that there were six Kages instead of the usual five. Nagato asked, “Who is the sixth Kage and where is he from?”

“That is the Mokukage,” said the Guardian, “He is the leader of Kusagakure which has become the sixth great country under his leadership.”

Nagato looked closer and saw it was Zetsu. “No way,” Nagato said, “I could believe the Konan thing, maybe even the Kisame thing, but Zetsu a Kage? Zetsu has lost fights to butterflies.”

“Actually,” said the Guardian, “Since he isn’t your gopher in this world he has had to hone his jutsu. He became so skilled that he was made the leader of Kusagakure.”

“He is a cannibal though,” said Nagato.

“Well while experimenting with jutsu he learned how to do photosynthesis,” the Guardian explained, “Now all he eats is sunlight. I guess that makes him a ‘sunnibal’ instead of a cannibal.”

The guardian laughed at his joke though Nagato was clearly not amused.

“Why don’t we go pay Kakuzu and Hidan a visit now,” the Guardian said.

They teleported in front of a hospital with a crowd of people gathered.

Nagato smiled deviously, “I’ll bet they are badly injured in that hospital from fighting all the time.”

“Not quite,” said the Guardian. Kakuzu was rolled out onto a stage in a wheel chair by Hidan.

Nagato raised an eyebrow as he asked “What happened to Kakuzu?”

“Well,” said the Guardian, “After Kakuzu left his village and no Akatsuki to join, he spent most of his life alone with nothing but money. Then one day he saw some of his former comrades being killed by Hidan. On instinct he saved their lives by implanting his spare hearts in them. Realizing how good it felt to give, he began giving away his money to good causes like this hospital. Hidan was so touched by Kakuzu’s act of kindness that he abandoned Jashinism and became his personal caretaker.”

Nagato felt even more confused he said, “Hidan touched by an act of kindness? He once saw a puppy helping a three-legged kitten and kicked them.”

Kakuzu cut the red ribbon and the audience applauded at the opening of the hospital. As Hidan was wheeling Kakuzu away he saw Asuma smoking in the crowd. He walked over to him and handed him a pack of nicotine gum.

“Here,” Hidan said smiling, “This will help you quit smoking and live longer.”

“Thanks,” Asuma said putting his cigarette out, “You’re a very nice guy.”

“He is more than that,” Kakuzu said weakly, “He is my best friend in the whole world and the son I never had.”

Hidan started to tear up and hugged Kakuzu as he said, “I love you too big guy.”

Nagato stuck his tongue out and said, “Ugh. I actually think I preferred their fighting.”

“It is time for us to go see some of the others now,” the Guardian said.

They teleported to an open field where fireworks were going off and puppets were doing acrobatics. The audience was applauding wildly. As the show was ending the puppets got on top of one another forming two pyramids. Sasori and Deidara jumped from a clay bird and landed onto the two puppet pyramids as the audience let out one final wild scream of applause, particularly from girls.

Nagato asked, “What are they doing?”

“The two happened to come in contact with each other and disapproved of the other’s art,” the Guardian explained, “They fought for days and eventually developed a mutual respect for their art styles. They also saw how no one else could appreciate their art do to the destructive nature of it. So they combined their art styles into a show that has made them celebrities.”

“Come on Sasuke,” Sakura said, “I want to try and get their autographs.”

Nagato looked over and saw Sakura and Sasuke going over to Deidara and Sasori.

“Well actually that kind of ties into what happened to Itachi,” the Guardian said, “Since Itachi was not a member of Akatsuki he was able to go to the Otogakure and kill Orochimaru. He and Sasuke were able to resolve their differences and destroy Otogakure. The village was so grateful for the destruction of their enemy that they allowed Sasuke and Itachi to return to the village. Itachi died from illness, but not before attending Sasuke and Sakura’s wedding and knowing his clan once again held a place of honor in Konoha.”

“Thank you,” Sakura said as Deidara and Sasori handed her their autographs, “I’m a really big fan.”

“No problem,” Deidara said, “It is always great to meet an admirer un.”

Tobi soon walked up to Deidara and Sasori and put his arms around them, “We’ve got to get going guys. I’ve booked you two another show to do in an hour.”

Nagato looked over at the Guardian and said, “He booked them a show?”

“Yes,” the Guardian said, “Tobi was heartbroken after the loss of Rin, but he learned from Deidara and Sasori’s art styles that although her life was fleeting there was a part of her that would always be eternal in him. He was so inspired by how they helped him that he became their manager.”

The Guardian thought for a moment. “Well I believe we have visited everyone,” the Guardian said, “Let’s head back.” A door appeared and Nagato and the Guardian went through it back to the nexus of the Multiverse.

The Guardian noticed Nagato looked depressed. He asked, “Is something wrong?”

“No,” Nagato said sarcastically, “I just learned that all of the Akatsuki members lives, as well as the world in general, would be better off if I and Akatsuki never existed. I’m doing great.”

“Well your world sure, but not for every world,” said the Guardian.

Nagato asked, “What do you mean?”

“Well in another world, your world is a manga/anime called ‘Naruto’,” said the Guardian, “Without you or any of the Akatsuki members doing anything evil the series became boring and got cancelled. Numerous fans who escape into a fantasy world must now contend with their boring uneventful lives. Fan girls who fantasize about having sex with the Akatsuki bad boys have nowhere to get turned on so now they must settle for boring, sexless relationships.”

“Huh,” Nagato said thinking, “I guess Akatsuki is important. I would like to return to my world now if I could.”

Nagato suddenly awoken with Konan and Zetsu at his side. Zetsu asked, “Are you okay sir?”

“Yes I’m alright,” Nagato said, “Is everything okay with all of you?”

“Yes,” said Zetsu, “I’m afraid the members have taken advantage of this opportunity to draw on the faces of your Six Paths with permanent ink.

Nagato looked as though he were about to get angry, but then broke out into laughter. “Those guys,” he chuckled.

Zetsu looked confused as he left and Konan asked, “Are you certain you’re okay?”

“Well I have one question,” said Nagato, “Would you ever marry Kisame?”

Nagato smiled at that reaction and said, “I love you.”
Karina59 and MinaKushiFC2 like this
Ninjagirl88 Couldn't stop laughing! Hidan nice? Whoa, the world would be so different!
Soranaru It was awesome until you mentioned sex. It was kinda..okay, VERY, irrelevant 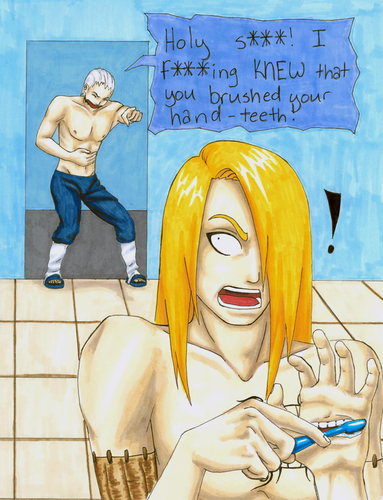 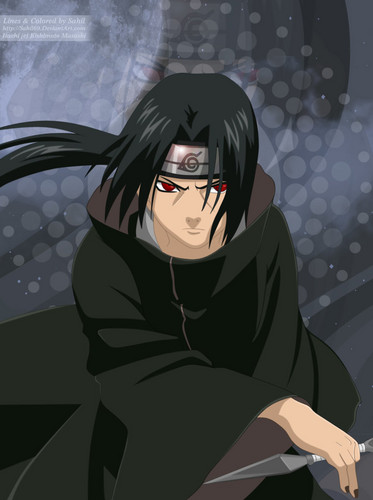 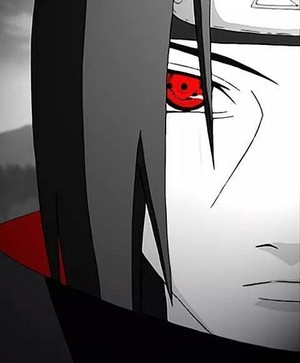 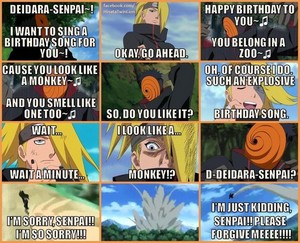 1
Deidara and Tobi
added by Gahhh
Akatsuki Mission: Zetsu's Garden
posted by AlexWhittier
The sun rose gently over a hill as Zetsu sprinkled water over several flowers and birds chirped a beautiful melody. Zetsu began to speak to himself. “This is a beautiful morning. Yes quite. Absolutely nothing could ruin it.” “Yo Zetsu! What the f*** are you doing?” Zetsu turned around and mumbled to himself. “Except that.” The birds flew away out of fear of Hidan’s shouting. Hidan looked at Zetsu’s garden with disgust. “These are some pretty ugly weeds you got here pal.” “We are not your pal. Now if you don’t mind We’d like to continue with our gardening.” Hidan...
continue reading... 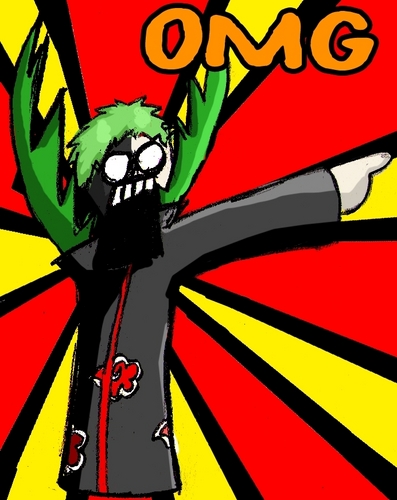 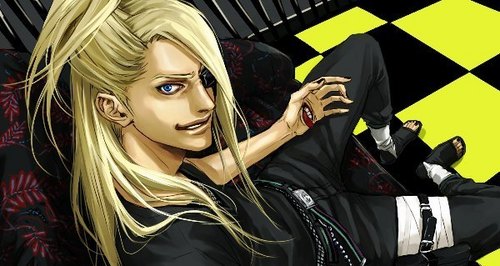 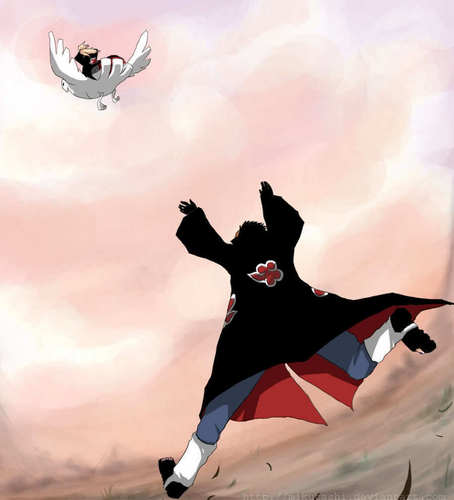 1
tobi and deidara <3
added by shikadara 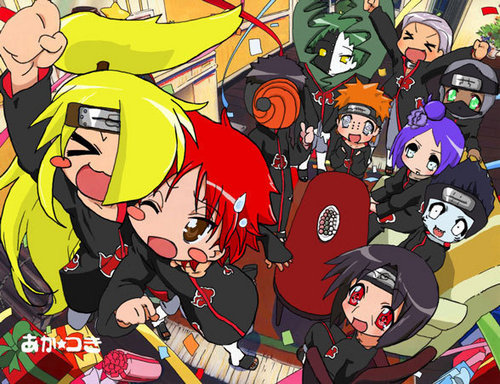 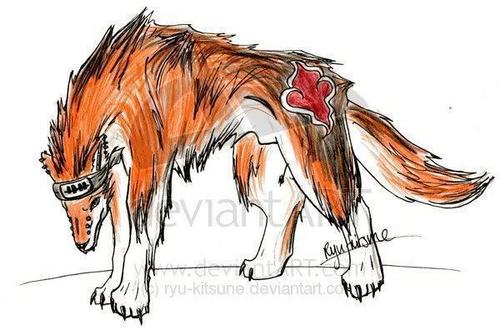 1
Pein as a wolf-pack leader ^^
added by Hidanfan 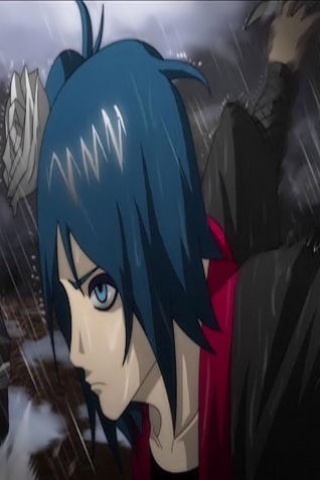 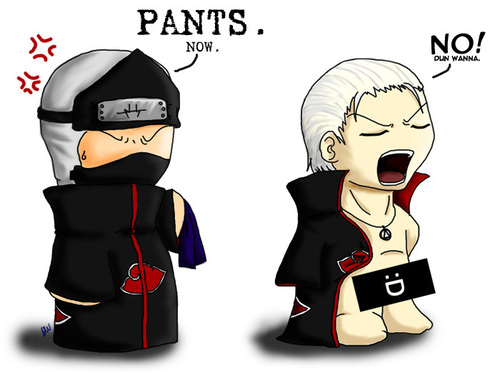 13
Pants. Now.
added by SilentRevelry
Source: Don't know, but not mine 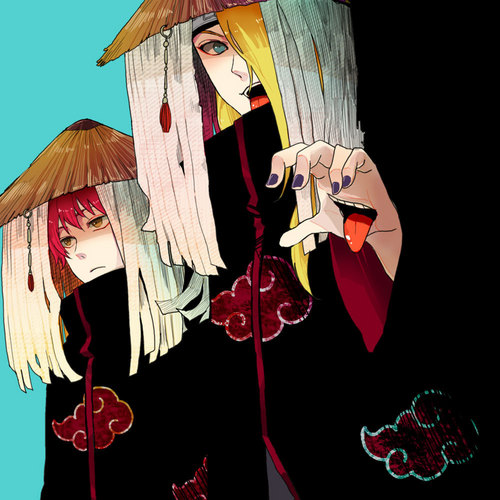 1
Sasori and Deidara
added by Ionelia 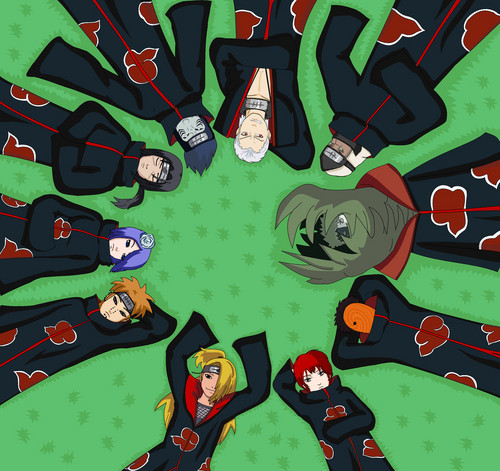 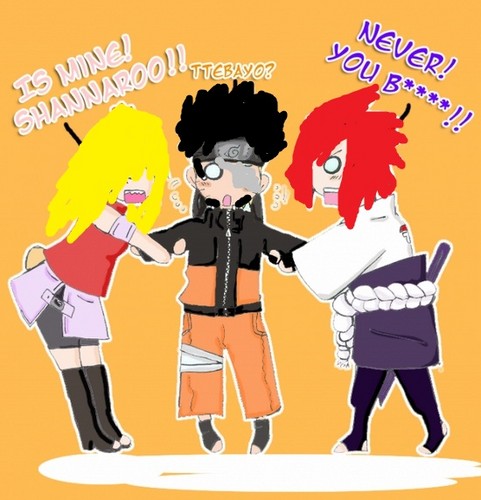 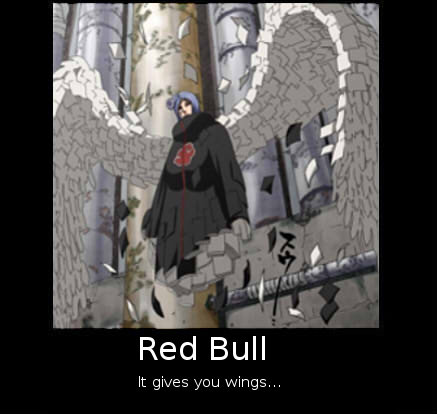