4
The Reanimation Reunion
posted by AlexWhittier
Five coffins shot out of the ground. The lids slowly fell down revealing Nagato, Kakuzu, Deidara, Sasori, and Itachi. Suddenly the bodies awaken.

Deidara steps forward and looks around saying, “Where am I?” He looks to his left and sees Sasori in a coffin and Kakuzu to the right of him. “Oh no,” Deidara said, “I’ve been buried alive un! This is my worst nightmare come true un.”

“Shut up brat,” Sasori said, “If you were buried alive then you wouldn’t be above ground.”

“I was checking to see if it was really your human body un,” said Deidara as he fell to his knees in anguish.

Sasori let go in surprise and looked at his hands. He really was human.

“Hey,” Kakuzu whispered to Deidara and Sasori, “You guys want to buy my coffin. I’m the tallest so it is nice and roomy. It’s like a luxury coffin.”

“Oh come on guys,” Kakuzu insisted, “You really can’t take money with you when you are gone. I have an entire fortune to rebuild.”

Kakuzu launched his hand at Sasori’s throat, but Sasori managed to dodge. “You also can’t take puppets with you either,” Kakuzu said, “I’m way stronger then you now shorty so don’t piss me off.”

Sasori ran forward and kicked Kakuzu in the groin, causing him to fall back into his coffin. “Like I would waste the energy of using one of my puppets on someone like you,” Sasori mocked.

Deidara looked over at the coffin on his far left and saw Itachi still quietly standing in it. “Hey Itachi,” Deidara said, “Are you revived too un?”

Deidara had an idea to check for sure. “If you aren’t then I guess you won’t mind me destroying your Sharingan un,” Deidara said as he reached forward.

Itachi swiftly kicked Deidara back. “I’m alive moron,” Itachi admitted, “I was just hoping you fools would think I was still dead and leave me alone.”

Deidara laughed to himself. “I can’t believe you died,” Deidara said, “Who killed you un?”

“Hahahaha! I killed Sasuke! That means my art is superior after all un,” Deidara rejoiced.

“If you had killed Sasuke then I wouldn’t have fought him in the first place. Besides I had a fatal disease at the time. So in truth your so called art is still vastly inferior to my hate,” Itachi explained.

Deidara stopped for a second and took out some clay. “Well I’ll just have to show you my art is superior then un,” Deidara said.

Nagato shouted, “Enough! It is no wonder you all died with the sorry behavior you are all displaying here.”

All four of them stared at Nagato. Deidara then asked, “Who are you?”

“What are you talking about? I was the leader of Akatsuki,” Nagato insisted.

Deidara thought for a moment and said, “No. Pain had orange hair and more piercings then a goth chick un.”

Nagato became annoyed as the others laughed and said, “Those were bodies I controlled from a distance due to my poor health. I’m the real leader. Look at my eyes.”

Nagato’s Rinnegan convinced them of he was indeed Pain.

“Actually he was just a figurehead,” said the voice of someone coming towards the Akatsuki, “I am the real leader and my name is Madara Uchiha.”

The newly white masked Tobi revealed himself to the group. Sasori, Kakuzu, and Deidara stood perfectly straight out of fear. Itachi and Nagato remained unaffected.

“Looks like Kabuto did a good job of bringing you all back,” Tobi said.

Nagato commented, “Not all of us are back. Where is Konan?”

Tobi replied, “We thought she had served her usefulness.” Rather Tobi didn’t want to reveal how he almost lost to her embarrassingly.

Deidara remarked, “I also see Tobi isn’t among us un.”

Sasori asked, “Who is Tobi?”

“Tobi was this idiot that replaced you as my partner un,” Deidara explained, “He was probably considered too stupid to revive un.”

The white masked Tobi stared at Deidara for a moment as Itachi and Nagato did a simultaneous face palm.

“I see you don’t recognize me,” Tobi said, “Perhaps this will help.”

Tobi then began talking in his fake childish voice. “Sempai! Oh Tobi is so happy to see you,” said Tobi, “Tobi missed you so much.”

Deidara started to sweat profusely as he asked, “You mean all this time I was being a jerk to the leader?”

Nagato remarked, “I kept telling you to be nicer to him.”

“Don’t worry,” Tobi said in his Madara voice, “I’m not one to hold a grudge.”

Tobi then teleported Deidara into the air and shot him with a fireball jutsu.

After Deidara landed on the ground Tobi walked away saying, “It is good to have you all back in my service. You’ll be useful to me in the days to come.”

Kabuto emerged and said, “Alright it is time for you to return to your coffins. You’ll need your rest.”

Sasori responded, “You look much uglier then I remember Orochimaru.”

Kabuto squinted and said, “I’m Kabuto. I was your spy for a while.”

Kabuto attempted to attack Sasori, but Tobi held him back. “Just get in your coffins and rest,” Tobi said.

They all returned to their coffins, which disappeared.

Tobi looked at Kabuto and asked, “You do have other reanimations right?”
Firefoxprincess, Karina59 and 2 others like this
nagato821 Wow I really like it!!!!!!:):):):)
AlexWhittier Thanks nagato821.
Karina59 That so awesome
AlexWhittier Thanks Karina59.
17
Deidara
posted by SilentRevelry 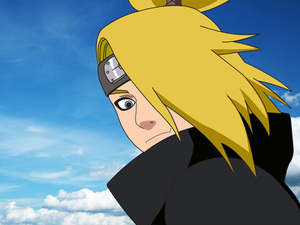 Deidara (デイダラ, Deidara?) is a missing-nin from Iwagakure. Before joining Akatsuki, Deidara was as a terrorist bomber for hire, where his work attracted the attention of Pain. Pain sent other Akatsuki members to recruit Deidara, though he refused. After being defeated by Itachi Uchiha, however, Deidara was forced to join the organization. Deidara maintained a deep loathing for Itachi from that point further and became determined to defeat him, even training one of his...
continue reading... 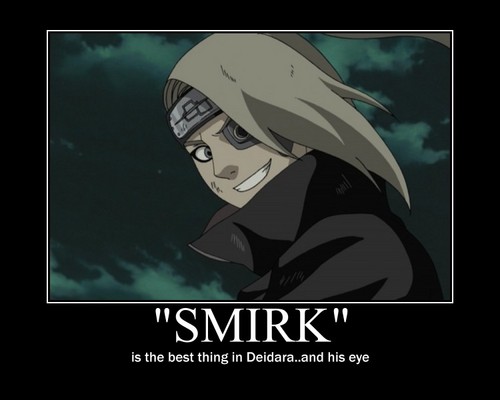 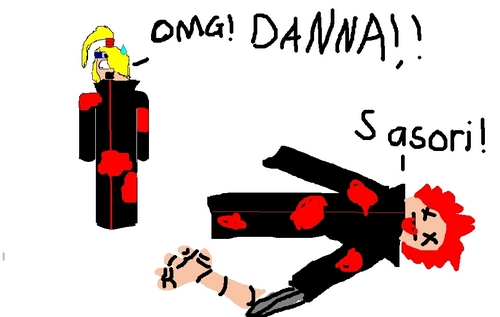 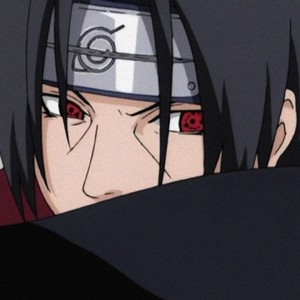 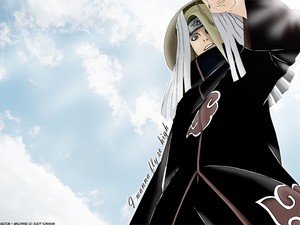 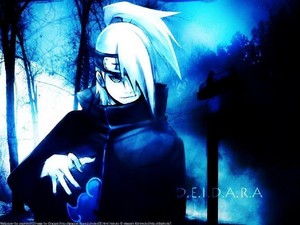 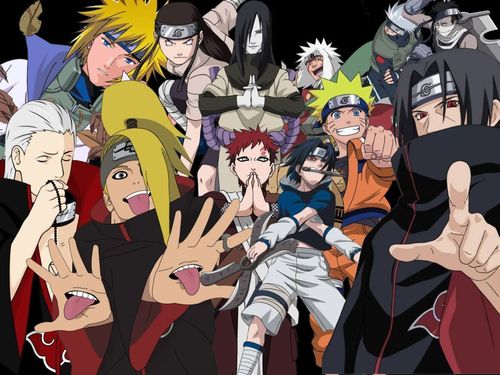 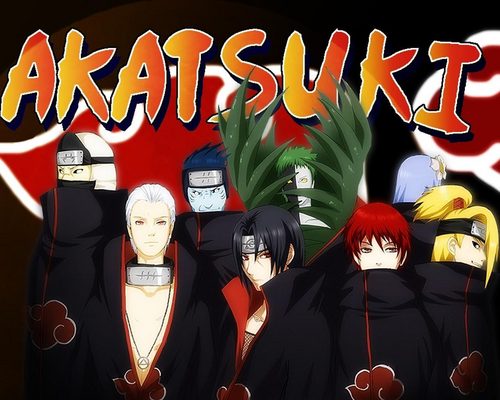 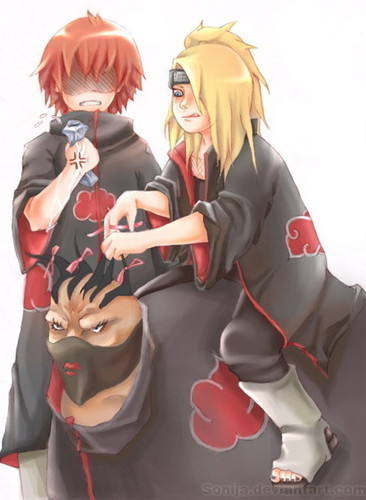 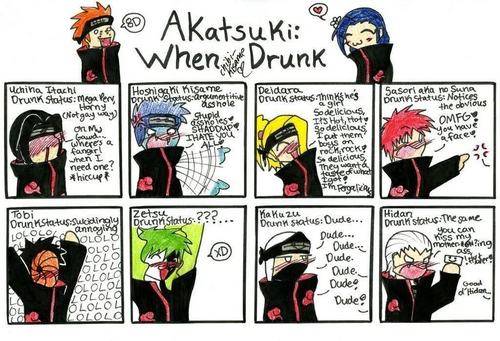 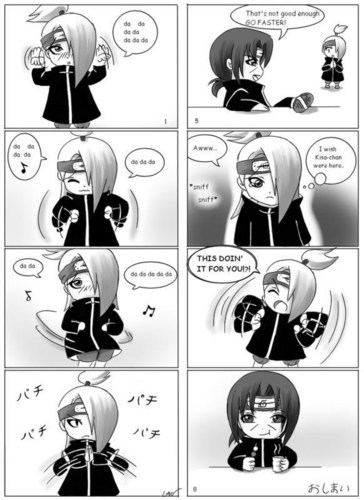 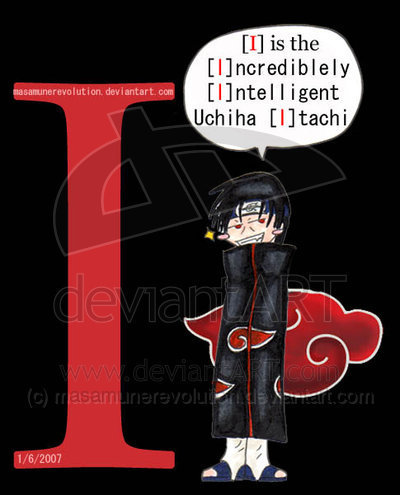 4
The letter "I"
added by deathnote
Source: I don't know!! 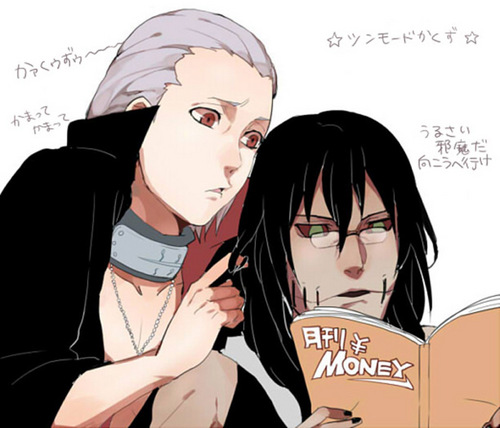 5
Hidan and Kakuzu
added by MK33 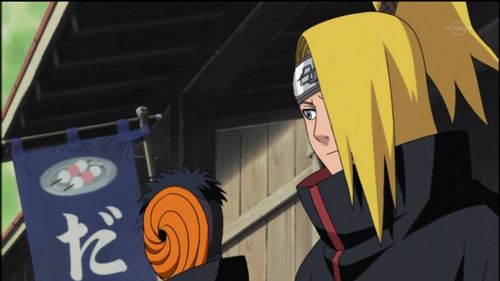 7
Tobi and Deidara
added by Hidan71 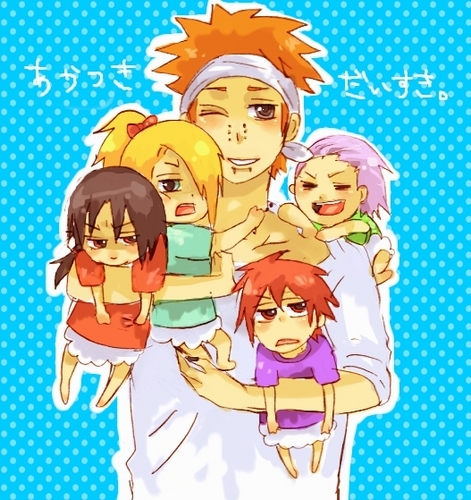 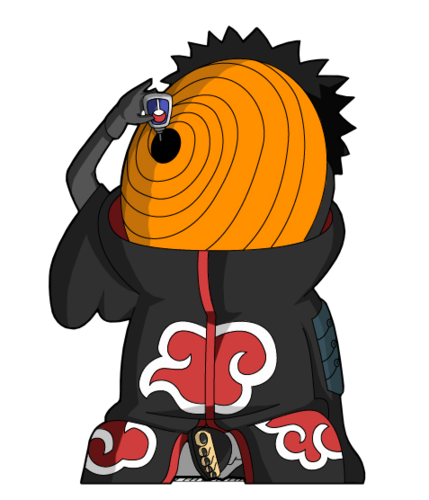