Alice was born on Mobius with her twin sister,Cali.Her parents were killed by an unknown man when she was eight.Her parents friends split up the twins.Aliky the Echidna(Zeros mom) took Alice and Famina the cat(Marys mom)took Cali.Aliky died but Zero and Alice had to live on the streets.They lived as gypsys.The way they made money was,when Alice was twelve,she swallowed knives and took them back out.That was how she got the nickname Blade.When Alice was 16 she learned that she had a cousin named Rouge and she went to live with her.She discovered that her sister was on another planet.With serious training,she became an assassin when she was 17.Along the way,she met Diva the shadow cat. They were friends immediately.(story in the club somewhere or coming soon)
Alice guards the south gate of planet Saruba.Diva guards the north gate.Maddie the rabbit and Luna the racoon guard the east.
Alice is a trained assassin and there is no way you can get out of line of fire...
She is currently widowed to a hedgehog named Rafael Jones.
Puppetmaster111 likes this
sierradawn9 ill show off raf when i can do paint^^ 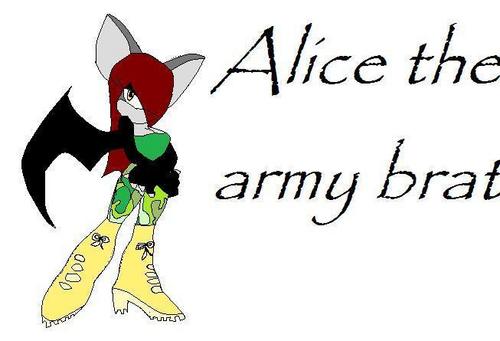 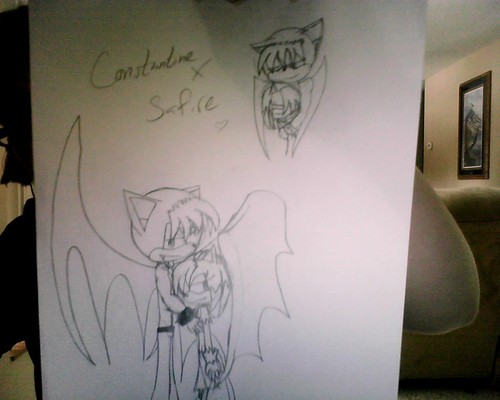 Safire x Constantine
added by Puppetmaster111
Source: Me and Seirradawn9 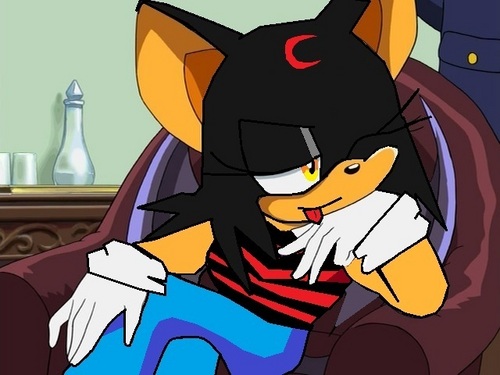 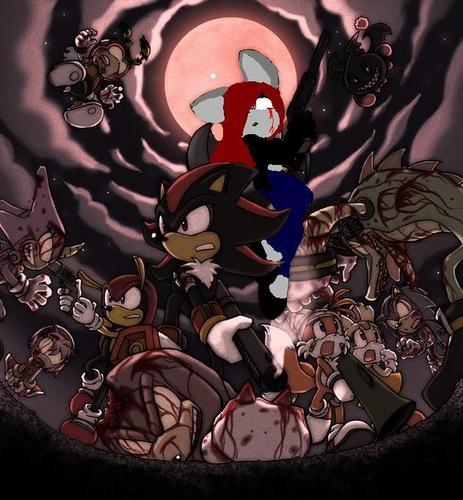 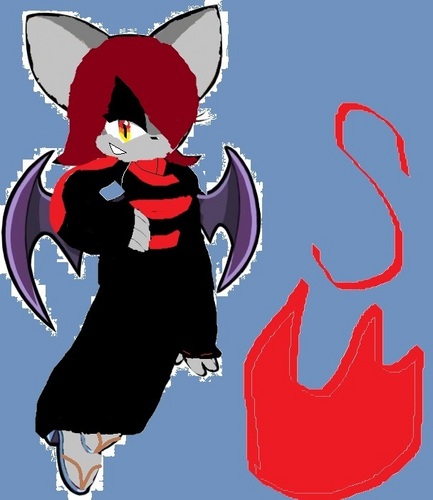 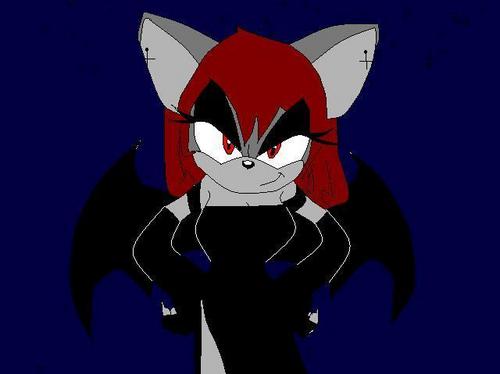 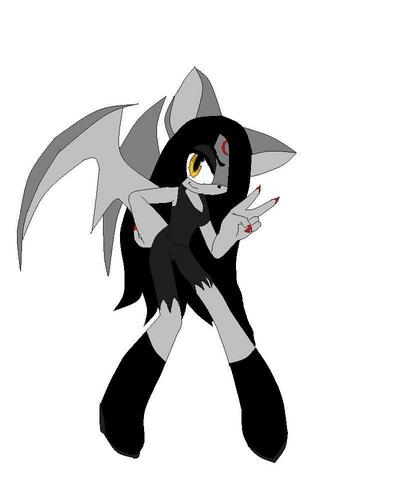 3
The real Ash
added by sierradawn9
Source: original: Kya- Snapdragon @ deviant art Recolors: me
Ash and Justin 4
posted by Alicethebat
In the field......
Zero had on gardening gloves and was was wearing a flame retardant suit.Not because of me!Because the Krimson Dynamo might explode.Justin had explained the whole thing before we left.
"Hey Freakazoid,look at this."Zero said.
"Nuh-uh.I don't want it to explode in my face!"I yelled."I was talking to the other Freakazoid"Justin walked over."Yep!Ash it's not gonna detonate!This stupid thing is scared of Zero!""Then that thing really is stupid"I said.Zero laughed mockingly."You should be the THING scared of me!"he said.My fingertips glowed orange and I narrowed my eyes."Hey hey...
continue reading...
2
Venetia's Musical Interferance
posted by sierradawn9
Usually, Venetia --Satsujin's Chao-- would pick a song for Satsujin to sing. One day thought, Ven wrote a song for Satsu and told Shendu to be listening...
Satsu's eyes scanned the lyrics.
"Venetia, why--"
"CHAO!!!!"That was Venetia's way of saying: YOU WILL SING IT AND YOU WILL LIKE IT!!
Satsu flinched from her Chao. She cleared her throat and began to sing, unaware of Shendu listening.
I've been tortured,
Most of my life,
Struggled in the darkness,
Bring me to the light,
They all knew you loved me,
They all knew I loved you back,
You made up for what he lacked,
Kiss me,
Kiss me,
Call me...
continue reading...
2
Faesyti and Mephaestys, death themselves...
posted by sierradawn9
Faesyti----

Gray chinchilla with an extremely long braid, cloudy red eyes with no pupils, and a hole in one of her ears

She wears a dark robe with a pentagram on the chest, and she has a scythe she carries around

Name:Mephaestys (pronounced...
continue reading...
2
Rosalie: First Arrival (pt 1)
posted by sierradawn9
Ash shot out of bed, panting. She calmly looked around her bedroom. No robotic eyes to be seen. Just Kalona sleeping on a recliner, snoring like a drone.
That might have been the strangest nightmare Ash ever had.
***
She was looking into a mirror. Something was... off. She looked closer at her face.
The eyes. Definitely the eyes. They were multi-colored and robotic. The pupils shrank as if it was a camera focusing.
The mirror image stopped being a mirror image. It reached up towards Ash. Ash jumped back before it could grab her. She could hear whiiir! sounds coming from the image that...
continue reading...
1
Facebook...
posted by BlackRoseLove
Facebook

Rafaello Black said: As do I Alice...

Kalona is in a relationship with Ash Black 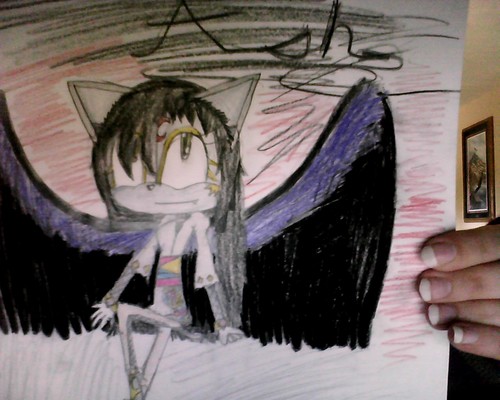 Ash (fallen Angle)
added by Puppetmaster111
Source: Me, BlackRoseLove, and Sierradawn9
1
Young Ash-School Bus
posted by BlackRoseLove
As the yellow bus pulled up, Ash got out of the tree and ran up to where the bus stopped. She shifted her backpack from one shoulder to her back. Justin and Jr followed.
The bus was always chaotic, and had unruly kids throwing and dodging spitballs, paper planes, and wads of paper.
Ash headed strait for the back-back seat. Her seat.
Some punk had the nerve to sit in her seat.
Ash frowned."Outta my seat,"she said. The bus started moving.
The kid smiled."No."
Ash growled."Out. Of. My. Seat, you moronic brat!"
Justin saw this happening out of the corner of his eye. He got out of his seat...
continue reading...
1
Future Flames chapter 1: Romania
posted by sierradawn9
"Alice, you CANNOT move to Romania! You CAN'T!"Diva tried to reason with Alice, who was taking the kids and moving to Romania. Anything to get away from the damned government that was on her tail, but that wasn't the only reason. Alice had been hiding a secret. She narrowed her eyes at Diva.
"I can and I will... Stop hounding me about this. I'm going and that's final."
Diva frowned."I lost you once, I'm not gonna lose you again!"
Alice crossed her arms and rolled her eyes."You're not losing me if I move. You'll still be in close contact."
"I know--but...."
Alice growled in frustration. Diva...
continue reading...
3
The Defeat Of Dark Drake part 1
posted by sierradawn9
The mountain was quiet. Drake looked into the clear ball of memory he had stolen from Ash, and saw pain. At first, love, then pain. He looked away.
<No... I can't watch...>he thought.
He sat cross-legged in a cave. His time-old eyes saw perfectly in the dark. He looked at his carrot-colored hair, which still had blue tips. He frowned.
<Damn. What an animal I've become. I don't want it to be this way... I want them all to be happy... Not in fear... And now Safire is a dragon?> He stood, realizing what he must do. Find Constantine and ask for help. Ugh! He hated the thought...
continue reading...
1
When Satsu and Shina met.
posted by sierradawn9
Shendu smiled at Shina."There's someone I want you to meet, Ro-I mean Shina."
Shina looked up at him with a cute expression on her face.
"The goddess of fear,"Shendu said. Shina looked doubtful.
"Is she scary?"she asked. Shendu shook his head. They were walking down to the park, where Satsujin used to read non-stop. She sat on a bench, with a book open on her lap. Her eyes scanned every last word. Her chao, Venetia, who loves to be called Ven-Ven sat beside her, reading a magazine someone had dropped on the ground. When Shendu and Shina got within 7 feet of Satsujin, she spooked them by speaking....
continue reading...
1
The Sad Life of Satsujin Higashi (extended) (chapter 1)
posted by sierradawn9
It was a happy family of five. Mauri and Kasume Higashi were the proud parents of Filicity, Damien, and Victoria. They were rumored to be the last of their kind, being decendants of prehistoric birds. They lived in a forest at the halfway point between city and country.
Filicity loved music, Damien loved to read, and Victoria sang and drew, but she loved to read as well.
When the couple knew the children were asleep, they began to fight. It was never a small thing that started these fights, always things that Mauri did. One night though, he did something that would start a chain reaction:...
continue reading...
More Cards
1234567891011