interview..on sleepwalking and race to witch mountain..
posted by krystylmomo
RadioFree.com: You just did your interviews with the Hollywood Foreign Press. How did that go?

ANNASOPHIA: They're always nice. They ask some funny questions, but you know...It's great. I mean, they've been in this business much longer than I have. It's fun to hear them talk, and they generally always have really good questions. Some odd ones, but mostly all good. [laughs]

What are some of the oddest ones?

They didn't do it this time, but [they sometimes ask] if I have a boyfriend or something. [laughs] It feels like my grandma, you know? Or my grandma's friends asking me questions. [laughs] But it's fine. I don't mind it.

Charlize was such a hands-on producer with you on Sleepwalking. How did her being an actress help her in that behind-the-camera role?

Well, she just really understands. I mean, she's the best you could have. She understands that it takes time, emotionally, to get into something, and that it's unhealthy to stay there for too long, because you don't want to become that character, or be in the mental state of that character all day long. So she really understands how to talk to everyone, how to get things done, the time it takes to create a scene, to get into a scene, how to motivate an actor to a scene. I mean, she pulled so much from me. I don't think I could have given half the performance I did without her there. She just is like the Energizer bunny. [laughs] She's incredible.

Your character Tara skates onto a diving board and dives into a pool. How did the shooting of that scene go down? Because rollerskating to the edge of a diving board seems very...precarious...

Well, I skated around the pool, and then I walked up the stairs. I had some practice. I practiced before we started shooting and before we even got to Regina. They sent me the skates and I broke them in. [hesitates slightly] And then a stunt double came up and got on the board... [laughs] I dived in, but she did all the close up on the feet. She fell in one time, actually!

But you're the one swimming around with skates on? That seems like a hard thing to do...

No, actually...I mean, put the skates on, jump into the water, twirl around a little bit...They had a water camera, so we were tight on time. We were getting close to the end of the day, so you just jump in, do the stuff, look ethereal, and hop out. [laughs]

So what's the secret to looking ethereal?

Well, water does this really cool thing with your hair, and it goes all over the place and looks really soft. We have underwater pictures at our house. I don't know [who] the photographer is, but they're just gorgeous. The water does something to people's skin tone, and the hair and everything. So I twirled around a little bit under water. I didn't feel graceful, but... [laughs] I had bent legs and I'm trying to stay under water. Charlize was like, "Can we put on weights so she stays down?" Because the pool was shallow, so we could get my head up, I needed weights. And they're like, "You're going to drown her!" She was like, [mimics a tone of realization] "Oh, yeah!" She's great though. So I just had to like bend down and make sure to keep down. [laughs]

We understand the original ending of the story had more of a fantasy element. Did you film other surreal scenes that didn't make it into the final cut of the movie?

Yeah, there was a scene...Tara, in the first draft, has friends. [laughs] And she's kind of starting to go into the wrong crowd. She has a friend who's like pretty abusive to [Nick Stahl's character] James. You know, "Let's go out. Can you take us out?" And all James wants to do is let Tara have a fun time. And so they go out to a rollerskating rink and Tara sees her mom, but then it flashes by, and it's really not her mother. Things like that. But all in all, I think the story turned out really well because the ending we have in the story now is more true to life--and it's open, you know? It creates discussion when you walk out of the theater. What do you think is going to happen to James? But we don't want to tell that, because we want to show hope, you know? There's hope for Tara and her mom, and James...So I think the ending worked out better, the whole changing of the [movie's title]--the characters really are sleepwalking.

I wanted to jump over to some other topics for a moment. How did the experience of recording audio commentary for the Bridge to Terabithia DVD last year go for you?

Sometimes it's hard because when you go in, you remember stuff, and then you come away, and you forget everything. [laughs] And then you listen to a little bit of the commentary and you go, "Oh, I remember that!" I think my favorite part about doing commentary is letting people in on fun little things that they might never have noticed--fun little stories.

Having done movies at such an early age, do you feel your childhood is sort of documented on film? Do you get freaked out by seeing yourself in early movies like An American Girl Holiday?

I wouldn't say my childhood's documented on film because I'm playing a role--it's a character, it's not me. So I was never really weirded out by seeing myself on film. I generally am embarrassed, you know? It's like, "Oh, change the channel!" It's kind of awkward. [laughs] I mean, I love what I do and I do it because I love to work with talented people, and meet new people, and travel, and be able to tell stories that I want to share with the world. That's why I do it.

What is your favorite black and white animal: panda, penguin, cow, or something else?

Ummm... [laughs] Probably a panda.They look kind of cute. I think it's the eyes. Penguins are adorable, but they stink. I've never smelled a panda, though. [laughs]

We spoke to Dwayne "The Rock" Johnson and director Andy Fickman a few months ago, who are working with you on Disney's Race to Witch Mountain. The Rock seemed very excited about the movie. At what stage is the project, in terms of filming?

I am just as excited. I mean, seriously. Andy is the best. I'm going to have so much fun on that show! I've talked to so many people...Everybody knows Andy. Everybody. And I have never heard a bad thing said about him. And that's incredible, because they could be the best person in the world, but someone always...They always say a little comment, or imply something. Not with Andy! Everybody loves Andy! The stage...We're filming on the 31st, and I'm coming out to LA next week to live here. So we're getting very close!

You're shooting in Los Angeles? I thought it was being filmed in Las Vegas...

You know, how do you refer to The Rock when you first meet him and you're working with him? Do you call him The Rock or Dwayne?

Ummm... [pauses] You know, to be honest, I'm a little confused about that as well. I don't know! I think it's Dwayne, but I've heard people call him The Rock. But I'm pretty sure it's Dwayne.

He seems very easy going about using either name, but I could see how an initial encounter with him could be intimidating...

Yeah. Well, I met him, and I don't know how tall he is, but all I know is that I felt like a little animal compared to him. I mean, I feel like a rodent. He's so big.

Holy cow, I met him at the early stages of Witch Mountain...I think it was last summer. And he had just got off The Game Plan. They had just finished. And he had pictures all over his office. I mean, his office was about as big as this [small] room, because they were setting up a new office for him, so it was like a temporary. And he decorates all his offices with the theme of the movie he's on, or the next movie he's doing--his cast members, everything. And I walk in, and it's painted lilac. And I said, "So where do you think this will be shot?" And he goes, "Right here, in this room." And he pulls out a little mini taxicab. "And this is the taxi we're going to use!" And I mean, he had all these little special effects things. He's just crazy. [laughs] He's so funny.

It seems like you'll have the opportunity to do a lot of fun stunts and action sequences. Is there something that you're really looking forward to shooting?

I haven't thought a ton about that. But I know we're going to get to do some pretty cool stuff. The guy who did The Bourne Ultimatum is doing this movie, so it should be exciting!

Well, congratulations! And thanks so much for your time again... 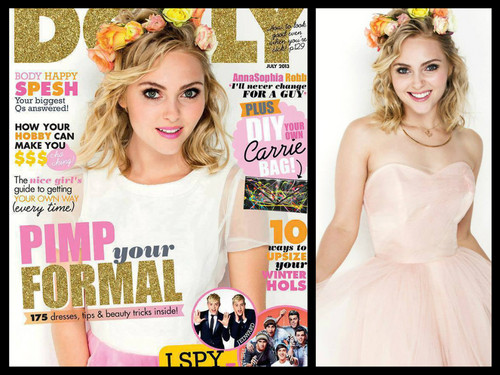 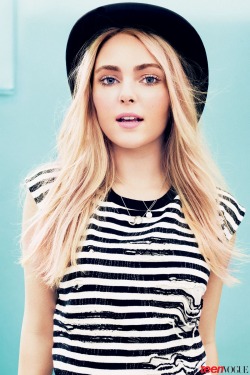 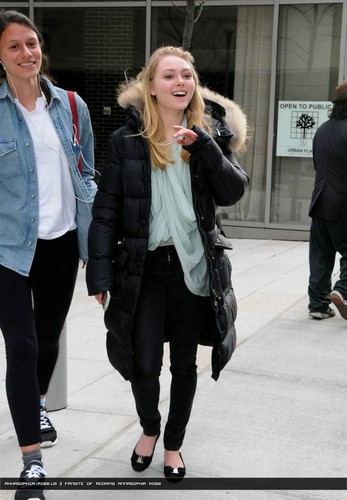 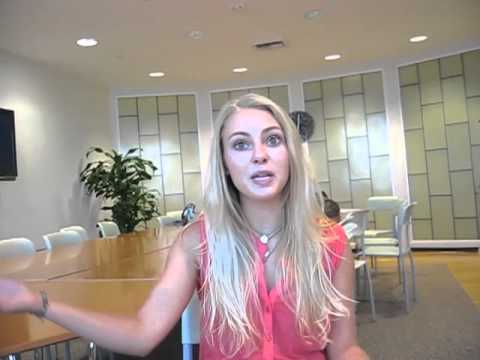 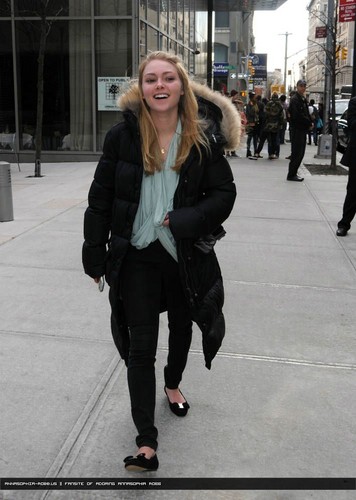 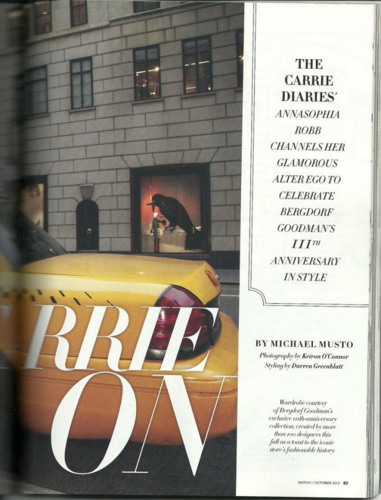 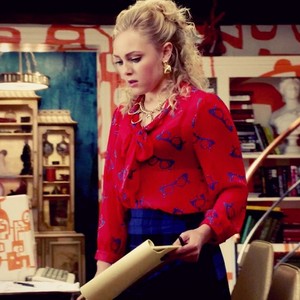 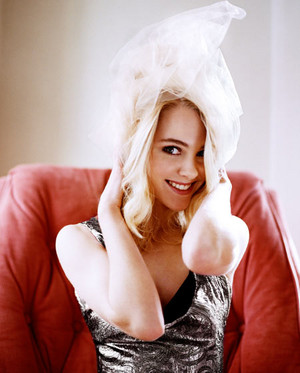 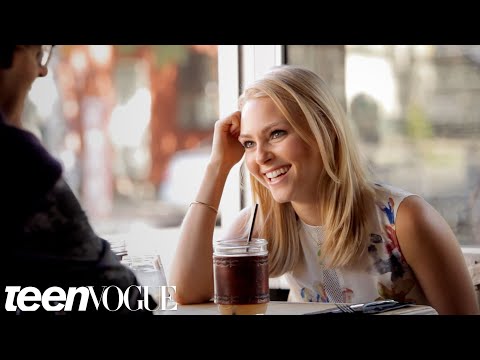 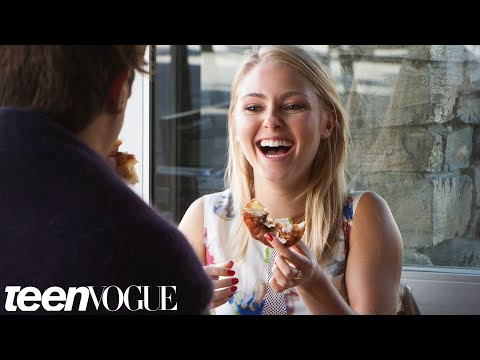