During the show, Kim Shin Young said, "The Apink members are the definition of innocent. But there have to be times when you don′t look pretty. When do you not look pretty?"


Nam Joo answered, "When I′m puffy. I get puffy easily."


Cho Rong said, "I look really ugly during dry rehearsals for music programs. I put on lipstick and make an effort, but I′m really not pretty during dry...
continue reading...
4
A Pink's Namjoo becomes the ambassador for animated film 'Tom Little and The Magic Mirror'
posted by demmah 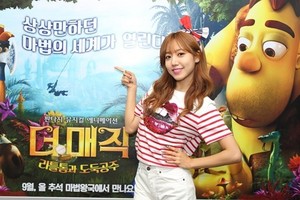 A Pink's Namjoo becomes the ambassador for animated film 'Tom Little and The Magic Mirror'; to sing a special OST

A Pink's Namjoo has been chosen as the ambassador for animated film 'Tom Little and The Magic Mirror'.

In addition, Namjoo will also sing a special OST for the film. A teaser video featuring her pure and clear voice while singing the OST was released and soon has caught the attention of many fans.

Meanwhile, 'Tom Little and The Magic Mirror' will be premiered this Chuseol Holiday in Korea starting from September 24th.

You can listen to a snippet of the song here.
11
A Pink's Son Naeun Reveals Rainbow Shirt & Blonde Hair
posted by demmah 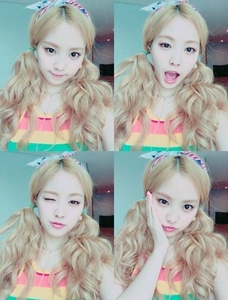 "Already second week. Thank you to all fans for the support! So happy every single day. Sad but time to say goodby to blonde hair. Hope to see you again. Get home safe and have a good weekend," posted Son on A Pink's Facebook on Sunday along with a picture.
In the picture, Son is wearing a rainbow shirt and her long blonde wavy hair is tied to two sides with a cute headband, adding onto her cute charm.
A Pink is currently actively promoting their new song "Remember."
6
A Pink's Bomi Throws The Opening Pitch Of A Baseball Game Between LG Twins And KIA Tigers
posted by demmah 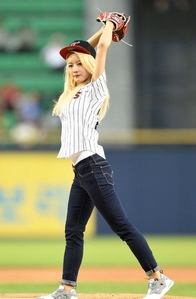 A Pink's Bomi Throws The Opening Pitch Of A Baseball Game Between LG Twins And KIA Tigers.

On Sunday, Bomi attended the baseball game between LG Twins and KIA Tigers. She appeared in the LG uniform and threw the first ball of the game.
Bomi showed the perfect pose and threw a powerful pitch on the ground. All players could not hide their awe of Bomi's powerful arms and everyone in the crowd sent her loud cheers and applause. Bomi repaid the cheers with a bright smile.
A Pink Manager Goes Viral With His Dance Moves [VIDEO]
posted by demmah 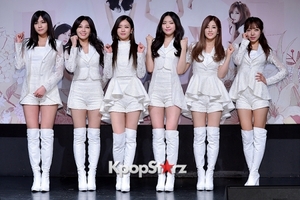 If a member of A Pink is away, their manager steps up to the plate!
A video posted to YouTube of A Pink rehearsing for a live performance has gone viral after fans took notice of their manager's dance moves. The video featured A Pink's manager standing in for member Eunji and performing the dance moves perfectly.

Since being uploaded to YouTube on Oct. 29, the video has been viewed over 1.3 million times.
Eunji's absence, due to her scheduling conflicts relating to her appearance in the KBS Drama "Sassy Go Go," led to the group's manager standing in during the live rehearsal and camera test to...
continue reading...
A Pink's Son Naeun Reveals Beautiful Younger Sister
posted by demmah 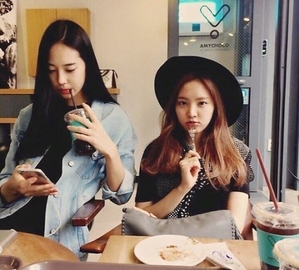 Chuseok is indeed the time where idols have the chance to reunite with their families and loved ones and it looks like A Pink's Son Naeun did just that and revealed who her younger sister was!

More Sharing Services
0 comments
son naeun
son naeun
Chuseok is indeed the time where idols have the chance to reunite with their families and loved ones and it looks like A Pink's Son Naeun did just that and revealed who her younger sister was!
Like Us on Facebook 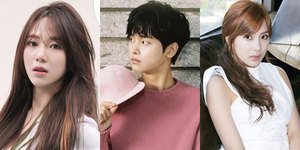 N, Minah and Ha Young will be replacing BTOB′s Ilhoon and Apink′s Bo Mi, who left the show a while back, to assist MCs Jung Hyung Don and Defconn.


The new assistant MCs will be appearing on the show in the beginning of next month.


Meanwhile, Weekly Idol airs every Wednesday at 6 p.m. KST.
A Pink's Chorong shows off her sexy body and shares diet tips in 'Sure'
posted by demmah 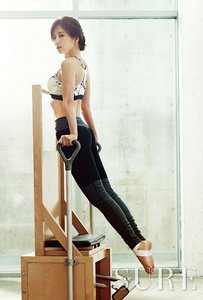 Wow, so that's the awesome body that A Pink's Chorong's been hiding! In her photoshoot for 'Sure's December issue, Chorong flaunted her evenly toned, sexy body and shared some health tips to shedding that stubborn fat.

The singer revealed that her current body is the result of eight years of hapkido and her regular sessions of pilates. Chorong is living proof that the hard work can help achieve any look you so desire!

Chorong confessed that pilates has transformed the muscle on the bottom part of her body from thick and ungainly to slim and toned....
continue reading...
11
Apink Talks About Sinsadong Tiger′s, Brave Brothers′ and Duble Sidekick′s Different Styles
posted by demmah 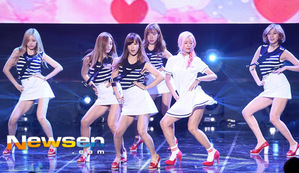 The Apink members spilled on the composers they′ve worked with and their respective styles.


The Apink members appeared as guests, sans Na Eun and Ha Young, on MBC FM4U′s Kim Shin Young′s Noon Song of Hope on August 4, where they talked about the composers they′ve worked with.


Eun Ji said, "Duble Sidekick is really detailed. He plays close attention to things like the last note. So it takes a long time."
5
Apink′s Jung Eun Ji Reveals How She Lost 15 Kg
posted by demmah 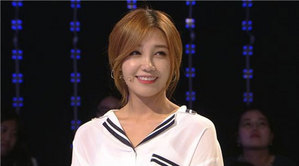 Apink′s Jung Eun Ji revealed that she lost 15 kg before her debut.

During the recording, Jung Eun Ji learned that the other Apink members picked her as the member whose appearance changed the most, to which she agreed.


Jung Eun Ji revealed that she lost the weight through exercise and continues to meet with a personal trainer as well as enjoys boxing.
You Might Also Like... 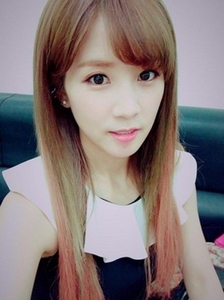 "Pandas, shall we spend today being thankful? Also, today is our last performance day! I'm so sad, but they were such great times for me thanks to our fans! Thank you so much and see you soon! Chu -3-," posted Chorong on A Pink's Twitter on Saturday along with a picture.


In the picture, Chorong is in the music program waiting room, showing off her beauty at the camera.
South Korean All-Girl Group Apink Kick Off Their 1st North American Tour In Canada
posted by demmah
A Cube Entertainment announced that K-pop girl group Apink are ready to kick off their first ever North American tour this week. Korea Herald reported Monday that the South Korean act is slated to begin Pink Memory: Apink North American Tour 2016 at The Orpheum in Vancouver, Canada today.

Apink will go straight to Dallas on Wednesday to perform before their fans at Verizon Theatre, while on Friday, the group will hold a concert at Regency Center in San Francisco before they will conclude their North American tour at Club Nokia in Los Angeles Saturday. 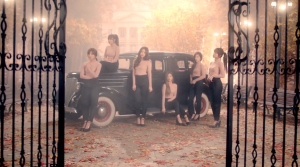 Apink has never really had a break-up song. All their songs have been about love, with lots of bright colors and pastels, but most of all, a lot of pink. Now, they have a slightly more mature concept (while still keeping some of their cutesy aspects), with a bittersweet break-up song.

This song is about a girl looking back at a past relationship with nostalgia. In the chorus she asks, “Do you remember the times we spent together? Can we turn back time?” There was clearly a break up and it pretty clearly wasn’t mutual. The girl misses the relationship and the support that she had. They...
continue reading...
12
Apink
posted by demmah 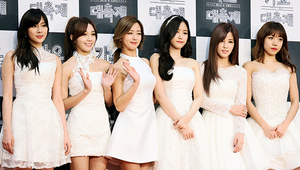 The group has released five Korean extended plays and one studio album. In April 2011, Apink released their first extended play (EP), Seven Springs of Apink, and performed a song from it, "Mollayo" (몰라요; "I Don't Know"), on Mnet's M! Countdown. The group has continued to perform live and on television shows since then. Apink released their first Japanese-language single, "NoNoNo", in October 2014. Their fifth Korean EP, Pink Luv, released in November 2014, debuted at No. 1 on Gaon's weekly album chart.
12
A Pink's Naeun Shares Her Beauty Tips With Sure Magazine
posted by demmah 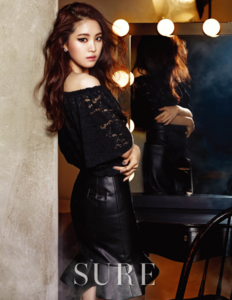 A Pink's Naeun looked stunning in diverse beauty looks for the June issue of Sure. The popular idol tried strawberry lips, heavily shaded pink cheeks, and bold gray nails while modeling monochromatic and pastel designer ensembles. For most of her photos, she posed in front of a professional makeup vanity that made her STONEHENgE jewelry shine.

During the accompanying interview, Naeun revealed how she keeps her skin clear and healthy. The star credits keeping hydrated as the most important step in preventing dry skin. She explained, "You have to make drinking water into a habit, which can be...
continue reading...
12
A Pink Takes A Group Photo While Making An Appearance On The Cultwo Show
posted by demmah 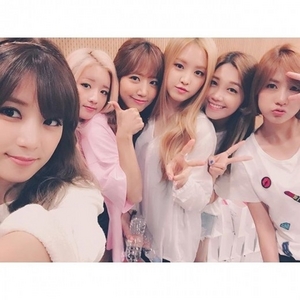 Girl group A Pink took a group photo after making an appearance on "Cultwo Show."


In the picture, A Pink members are posing for a self-taken photo together. 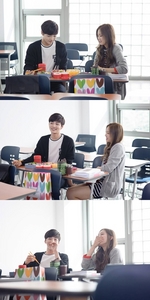 Photos of Kim Min Jae and Son Na Eun on the set of tvN′s Second Twenty have been released.


The photos were posted on the drama′s official Facebook page on September 1 along with the caption, "A typical campus couple lunch date. If you′re envious, you′re losing."

In the photos, Kim Min Jae and Son Na Eun are seen enjoying a lunch date in a classroom. The friendly atmosphere displayed in the photos have been attracting attention as well as evoking envy from viewers.


Netizens who saw the photos responded, ′They′re a cute couple,′ ′I′m jealous,′ and ′I will shut up and tune in.′ 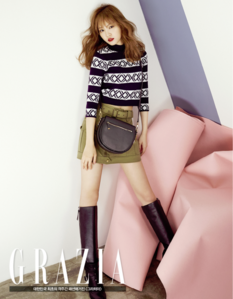 A Pink's Naeun starred in "A Better Me" for the November issue of Grazia. The stunning star rocked youthful combinations that used a variety of geometric shapes, studs, buckles and decorative zippers. All of the pieces were from Rebecca Minkoff's Fall/Winter 2015 collection. The K-pop favorite brand is known for its sensible pumps, miniature purses and beach-ready dresses.

According to the magazine, Naeun's makeup included dark red lipstick so she would look more feminine and mature. Thus, there was contrast between her wardrobe and her face. The stylists also used a-line mini skirts and wide...
continue reading...
Ticket Sales Open For A Pink's 2016 Pink Memory North American Tour
posted by demmah
Tickets for A Pink's North American tour in 2016 is currently on sale.


Tickets for A Pink's North American tour in 2016 is currently on sale.

With A Cube Entertainment revealing that A Pink will be holding their North American tour, there is excitement from Pink Pandas (A Pink fans).
A Pink's North American tour will kick off on Jan. 5, which their first stop will be Vancouver, Canada. The group will perform their hit singles and entertain the fans at Orpheum Theatre.
Tickets are currently on sale and can be purchase by going to KPOP ME's official website.
Getting fans excited, a promotional video was uploaded on Nov. 26 on KPOP ME's official YouTube channel.
Provided is the entire schedule of A Pink's tour and where they will stop at.
Tour Dates:
Vancouver: Jan. 5 at the Orpheum Theatre
Dallas: Jan. 6 at the Verizon Theatre
San Francisco: Jan. 8 at the Regency Ballroom
Los Angeles: Jan. 9 at Club NOKIA
Manager Of ‘APink’ Takes Eunji’s Place In Performance Practice And Nails It! [Video]
posted by demmah
Ever since they made their debut back in 2011, K-pop girl group APink has grown into their own. Just this year alone, they became the first group to win five consecutive awards on Music Core, received numerous awards from multiple awards shows such as the 29th Golden Disk Awards and Seoul Music Awards, and went on their first overseas tour known as Pink Paradise. On top of all that, their summer song “Remember” became one of the most popular songs for the season not only because it was catchy, but it personified the season in Korea perfectly. Not to mention, they were one of the few K-pop...
continue reading...
More Cards
1234567891011