2
Humuhumunukunukuapua'a - Lyrics - from HSM 2
posted by 2468244
RYAN:
A long time ago
In a land far away
Lived a pineapple princess Tiki
She was sweet as a peach
In a pineapple way
But so sad that she hardly speaky

Still if you listen well
You’ll hear her secret wish

SHARPAY:
Aloha everybody, my name is Tiki
I long to free
A truly remarkable fish

RYAN:
She dreams of a boy
Who is under a spell
That has left him all
Wet and scaly

SHARPAY:
I sing from my heart
Of the power of love
Just a girl with a uk… 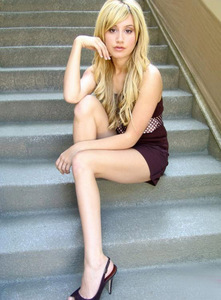 Sang at The White House at age 12.

Has a dog named Blondie, which is her nickname on "The Suite Life of Zack and Cody" (2005).

Parents are Lisa and Mike Tisdale

On the Billboard Hot 100 chart of 2006-02-11, she became the first female ever to debut with 2 songs simultaneously. The songs, "Bop to the Top" and "What I've Been Looking For" were both duets with Lucas Grabeel from...
continue reading...
writing
posted by eric22pa
I am a writer and a teacher. I have some minor publications. A few short stories and over fifty articles. I also wrote for a: politician, judge, clothing store and supermarket. I was wondering if there is any writing I could do for Ashley? I am specifically referring to: speeches, reports, journals, URL's, websites, etc. i don't know if Ashley is a college student; but if she is, I would be more than happy to write her: term papers, book reports, online classes, take home exams, research work, etc. thank you for reading. I look forward to hearing back from you.
10
Zashley or Zanessa?
posted by bea0809
Hello my Co-Ashleynatics!(thats a new term!)Today we'll talk about the issue between zashley and zanessa...well,many people have been debating about this for years!(OMG!)Of course, some people are on the ZASHLEY Side while some are on the ZANESSA Side. But,even if we argue about this, the decision isn't ours, it's up to zac. You know, even if we talk about this for a very long time, we cannot change his mind!Even if we think that he is more compatible with ashley or he's more compatible with vanessa, it's up to him.
Ashley Tisdale has an amazing body and is very attentive to the care of her body
posted by maritina12345 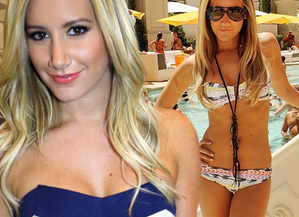 Ashley Tisdale has an amazing body and is very attentive to the care of her body makes a lot of sports, fitness and treatment is often in its look. Still looking in the mirror feels a "plague", which is a hassle, and experience ambivalent feelings for his physical appearance. Is there something behind to worry about?

This shows that even the stars have their most beautiful moments "no", and that happens to everyone to look beautiful and not see each other / and how much you would like. But perhaps this distorted view of the body (like Ashley as a girl who sees her physical negative) is a symptom of something deeper. We have all become a little 'too' fixed 'with beauty?
1
A Night To Remember - Lyrics - from HSM3
posted by 2468244
TROY:
Guess now it’s official
CHAD:
Can’t back out, can’t back out
TROY:
No
GABRIELLA + TAYLOR:
Gettin’ ready for the night of nights
The night of nights, alright
TROY:
Don’t panic
GUYS:
Panic
JASON:
Now do we have to dress up for the prom
ZEKE:
Dude, I don’t think we have a choice
KESIE:
Yeah, it’s the night of all nights
Gotta look just right
MARTHA:
Dressin’ to impress the boys
CHAD:
Do I want classic or vintage or plaid
ZEKE:
Where’s the mirror
JASON:
I think this tux is too baggy
TROY:
Too tight
It makes me look weird
GABRIELLA:
Should I go movie star or glamorous
MARTHA:
Sassy or sweet
TAYLOR:
Don’t...
continue reading...
ASHLEY TISDALE TELLS HOW SHE STAYS IN SHAPE
posted by maritina12345 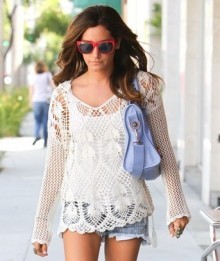 ASHLEY TISDALE TELLS HOW SHE STAYS IN SHAPE

Ashley recently revealed that she works out five days a week to keep herself in shape. Most stars don't share this information, but Ash doesn't mind!

Ashley works out A LOT. She's at the gym five days a week, alternating between boot camp class, cardio, spinning and strength training with a personal trainer.

'I always make time for it, because not only is it healthy for you, but it also relieves my stress,' she has said.'I’m so busy doing stuff and I get stressed a lot that working out takes me away from that.'Ashley also shared some diet secrets. She eats a high protein, low carb diet but tries not to limit herself too much.
'Sunday’s my day off, where I eat whatever I want,' she has said. 'I don’t not let myself have something. I do love French fries and bread.'

Wow! As you can see, she is commited. Do you think it's too much?

Ashley's new film, Sharpay's Fabulous Adventure, will be released on May 22.
6
Me Without You Lyrics
posted by Aglaia 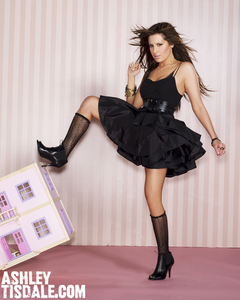 It’s just you and me and there’s no one around
I feel like I’m hanging by a thread, its a long way down
I’ve been trying to breathe, but I’m fighting for air
I’m at an all time low with no place to go
But you’re always there when everything falls apart


Chorus:
And it seems like the world is crashing at my feet
You like me the best, when I’m a mess
When I’m my own worst enemy


You hear what I say, when I don’t say a word
You are my rising...
continue reading...
1
Ashley Tisdale is 26 today! Happy birthday!
posted by maritina12345
Ashley has been planning the bash for days. She is having a big party this Saturday and is really excited!

We hope she has a great bithday surrounded by friends and family. Here are some photos of Ash over the years and how she has changed.
2
What I've Been Looking For - Lyrics - from HSM
posted by 2468244
RYAN:
It's hard to believe
That I couldn't see
RYAN + SHARPAY:
You were always there
Beside me
Thought I was alone
With no one to hold
But you were always
There beside me

RYAN + SHARPAY:
I want you to know

RYAN + SHARPAY:
Don't have to say a word

RYAN:
For so long I was lost
So good to be found

High School Musical Four
7
is zashley real?
posted by joejonaslover44
there are loads of zashley and zanessa fans out there, zashley is ashley and zac's names together.
zanessa is zac and vanessa's names together , for all those who dont know. zashley fans and zanessa fan are fighting right now which is wrong.
i mean zashley isnt even real! or is it? but it not just zashley. zanessa is not even working out! zac is putting his hand on ashley but! ashley doesnt even mind, while vanesssa is doing a serious face probaly thinking "back off ashley!"
but my point is, we should stop this fighting,its ridiculous! everyone has there own opion and we shouldnt be judging that. let the zanessa fans be. let the zashley fans be.
but i am a zashley fan. but that doent mean my friends judge me because there vanessa fans. some boys and girls arent either fans there are just saying it because of their friends.
so dont judge others!
Ashley Tisdale blonde or brunette? Rate the look you prefer!
posted by maritina12345 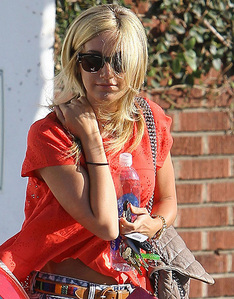 Blonde
Ashley Tisdale blonde or brunette? Rate the look you prefer!
Ashley Tisdale is back bions! View photos from blonde to brunette and the look and vote for your favorite!


Ashley Tisdale is back blonde! After seeing her for months with a shock delay, here are the pictures of the new look of the star. Look at the pictures and vote for the style you prefer!

New look for Ashley Tisdale: Blonde hair, short and layered! The cut, definitely comfortable and practical in view of the beautiful season, highlights the interplay of different lengths and tips of the hair uncombed, that gives the beautiful Ashley Tisdale looks youthful and cheeky.

Ashley Tisdale looks much more mature with dark hair! A shock of long hair framing the face of the dark. The hair is shorter around the face and show a game on the tips meches that fades and lightens the darker shade 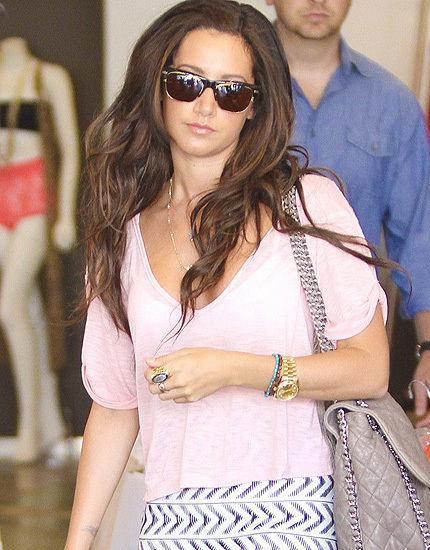 Happy thanksgiving!!!!! So excited to wake up and see 11 million followers, so as promised here’s your hint….. Dec 16th :)
And here’s Ashley’s previous message about her music coming out:

I have a feeling a surprise project I’ve been working on that’s super special to me is gonna come out before the holidays #mightbemusic :)
We can’t wait! 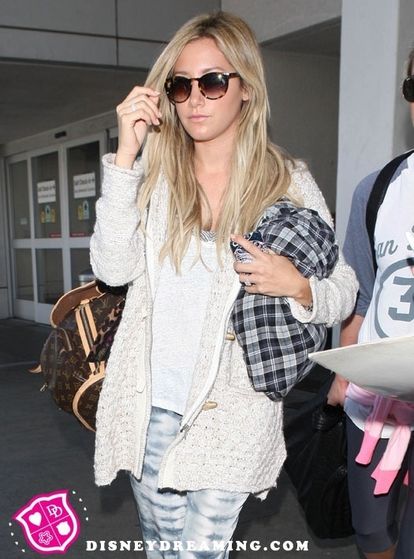 Switch ~ Lyrics
posted by 2468244
(Switch)
You’re out of this world I’m sure of it
A crazy intuition, you’re off and on
You’re here then gone, come back
A curious condition
And then you switch right over
It’s weird yeah I know but
Just can’t get a hold of myself

Hey, so strange
You switched in front of me
Hey, you’ve changed
Not like you used to be
‘Cause you get in my head and hold my heart
When I’m here you’re there, we’re worlds apart
So reverse your words, get to the start
And switch back to my world

Let’s crank it up (Crank it up)
Till the walls cave in
Just crank it up (Crank it up)
Put that record on spin...
continue reading...
Me Without You ~ Lyrics
posted by 2468244
It’s just you and me and there’s no one around
Feel like I’m hanging by a thread, it’s a long way down
I’ve been trying to breathe but I’m fighting for air
I’m at an all time low with no place to go
But you’re always there

You make me feel beautiful
When I have nothing left to prove
And I can’t imagine how I’d make it through
There’s no me without you
No me without you, no, no

You hear what I say when I don’t say a word
You are my rising...
continue reading...
Delete You ~ Lyrics
posted by 2468244
It’s not time to give this one more try, I don’t think so
Last night you said you want a last lie
I can’t let you wreck my plans
I’m planning to let you go
Oh, only one thing is true, only one thing to do
Time to delete you

It’s not time to say how much you care, I don’t think so
I don’t want you, I want you not there...
continue reading...
Hair ~ Lyrics
posted by 2468244
I’m in disarray
I’m unkempt
And I love you sugar
Yeah this is what you do
When you run your fingers through my hair
In the morning I’m feeling like a sexy superstar

Wow, wow
You rock my party
Wanna make you stay
You’re the only one that keeps me singing la la la
I love to smell your t-shirt
I like the way you are
But most of all I like it, like it

I don’t want to stand in line
Like I used to
Like I used to
I don’t want to have to scream and shout
‘Cause I’m the kind of girl that sticks
Like a tattoo
Like a tattoo...
continue reading...
What If ~ Lyrics
posted by 2468244
Don’t speak
I can’t believe
This is here happening
Our situation isn’t right
Get real, who you playing with
I never thought you’d be like this
You were supposed to be there by my side

When you say that you want me, I just don’t believe it
You’re always ready to give up and never turn around