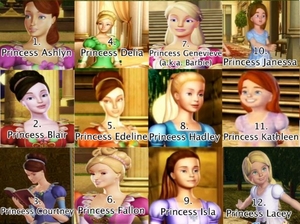 Each of the 12 Princesses is designated with a gemstone and a flower. Each princess' flower appears on their dresses, the book gifted to each of them, and on the stones on the floor of their bedroom, and each of the princesses' names begin with the first 12 letters of the alphabet.


Ashlyn - The 22-year-old eldest sister. She is practical, calm and knowledgeable. She loves music, especially playing the flute and oboe. She is straightforward and cares for her sisters, for whom she tries to act as a role model. Her flower is the purple geranium and her gemstone is a garnet. She bears the most resemblance to her mother Queen Isabella, and wears a purple dress.
🌸Ashlyn has long chestnut brown hair and light blue eyes. She has quite tan skin.
🌸Her appearance is similar to Princess Alexa from Barbie and the Diamond Castle.
🌸Ashlyn shares her name with Ashlynn from Barbie Thumbelina.


Blair - The 21-year-old 2nd sister. She loves horseback riding and collects music boxes. Feisty and outspoken, Blair is always the first to voice her opinion, especially her complaints about Rowena's presence in their lives. Her flower is larkspur and her gemstone is a ruby. She wears a red dress.
🌸Blair has pale skin and dark blue eyes. Her hair is long, and very dark brown to black.
🌸Her appearance is similar to the woman from the mansion in Barbie and the Diamond Castle.
🌸Blair shares her name with Blair Willows from Barbie: Princess Charm School.


Courtney - The 20-year-old 3rd sister and is close to Ashlyn and Blair. She seems to be the shyest of the twelve sisters. Her favorite hobby is reading, which makes her intelligent and open-minded, but often renders her totally oblivious to her surroundings. Her flower is the forget-me-not and her gemstone is a sapphire. She wears a blue dress.
🌸Courtney has long brown hair and brown eyes.
🌸Courtney shares her name with Courtney (The Barbie Diaries), Courtney (Barbie and the Diamond Castle) and Princess Courtney (Barbie Rock N Royals).


Delia - The adventurous 19-year-old 4th sister and Edeline's fraternal twin. She loves sports, especially croquet and horseback riding. Her flower is the sunflower and her gemstone is a green peridot. She wears a green dress.
🌸Delia has long light blonde hair and light green eyes.
🌸Her appearance is similar to Queen Marissa or the woman driving Rosella and Antonio's carriage in Barbie as the Island Princess.

Edeline - The 19-year-old 5th sister and Delia's fraternal twin. She loves to play sports, her favorites being badminton and croquet. She also tends to be messy and disorganized. Her flower is honeysuckle and her gemstone is orange citrine. She wears an orange dress.After Ashlyn, she resembles the queen the most.
🌸Edeline has long, reddish brown hair, light skin and pale brown eyes.


Fallon - The 17-year-old 6th sister. She loves animals, plays the harp, and is a romantic who hopes everyone can find their happily ever after. She likes hearts, lace, and writing stories. Her flower is the camellia and her gemstone is a pearl. She wears a fushia dress.
🌸Fallon has light skin, long strawberry blonde hair and brown eyes.
🌸Fallon shares her name with Fallon Casey from Barbie in a Mermaid Tale.


Genevieve - The 16-year-old 7th sister, and the main protagonist of the film. She tends to run late for all sorts of occasions. She is also an experienced chess player. Next to her family, Genevieve loves dancing more than anything. Derek, the royal cobbler, harbors romantic feelings for her. Her flower is the pink rose and her gemstone is a pink opal. She wears a dark pink and white dress.
🌸Genevieve has light skin, deep blue almost violet eyes, and long blonde hair.
🌸Her wedding hairstyle is similar to Princess Anneliese's hairstyle from Barbie as the Princess and the Pauper.
🌸Genevieve shares her name with Queen Genevieve (Barbie as the Princess and the Pauper) and Princess Genevieve (Barbie Rock N Royals).


Hadley - The 13-year-old 8th sister and Isla's fraternal twin. She loves to walk on stilts, an interest she shares with Isla. Her flower is the narcissus and her gemstone is a topaz. She wears a blue dress.
🌸Hadley has blonde hair and light teal eyes.
🌸Hadley shares her name with Hadley (Barbie: Princess Charm School) and Hadley (Barbie in a Mermaid Tale).


Isla - The 13-year-old 9th sister and Hadley's fraternal twin. Isla is a skilled acrobat and enjoys walking on stilts with her twin. Her flower is the lily of the valley and her gemstone is an emerald. She wears a light violet dress.
🌸Isla dark brown hair and dark blue eyes.
🌸Isla shares her name with Isla (Barbie: Princess Charm School) and Isla (Barbie: Dolphin Magic).


Janessa - The 5-year-old 10th sister and leader of the young fraternal triplets. She is interested in bugs and loves collecting them. While she may be bossy at times, her intentions are always good. Her flower is the jonquil and her gemstone is aquamarine. She wears a light blue dress.
🌸Janessa has dark brown hair and dark blue eyes.
🌸Her appearance is similar to Princess Rita from Barbie as the Island Princess.


Kathleen - The 5-year-old 11th sister, the middle triplet, and is close with both triplets. She loves art and enjoys painting, but tends to be messy like her big sister, Edeline. Kathleen is down-to-earth and helps keep balance among the triplets. Her flower is the daisy and her gemstone is a pink diamond. She wears a light pink and yellow dress.
🌸Kathleen has red-orange hair and blue eyes.
🌸Her appearance is similar to Princess Gina from Barbie as the Island Princess.


Lacey - The 5-year-old youngest sister. She is very close to her big sister, Genevieve and likes to collect teddy bears. Being the youngest, she is timid, somewhat clumsy and frequently needs help for the simplest things. Even though she loves her sisters and her father, Lacey often wonders about where she belongs in her large family. Her flower is the white lily and her gemstone is an amethyst. She wears a light purple dress.
🌸Lacey has blonde hair and light teal eyes.
🌸Her appearance is similar to Princess Sofia from Barbie as the Island Princess.

Derek - A handsome, 16 year old royal cobbler. He is friends with Genevieve and her sisters, secretly in love with Genevieve, and becomes the princesses' main ally in stopping Rowena. At the end of the film, he and Genevieve are happily wedded.
💠Derek has light skin, blue eyes, and short, brown hair.

Felix - Derek's talking parrot. He wants Derek and Genevieve to be together, often blabbing hints about how Derek feels to Genevieve, which causes great embarrassment for his master.
💠He has green, yellow, white and violet colored feathers.
💠Felix makes two cameo appearances in Barbie as The Island Princess.

Duchess Rowena - King Randolph's cousin and the primary antagonist of the film. She is brought to the castle to help the king raise his twelve daughters. She seeks to steal the throne by poisoning Randolph and getting rid of the twelve princesses. She is doomed to dance forever when a spell she tried to use on Genevieve backfires.
💠Rowena has gray hair and light blue eyes.

King Randolph - The father of the twelve dancing princesses. He loves his daughters more than anything, but is determined to turn them into "proper princesses" with Rowena. Little does he know Rowena is slowly poisoning him in an attempt to steal his throne and that it is up to his "unruly" daughters to save him.
💠King Randolph has dark blond hair and light teal eyes.

Desmond - Rowena's large and ruthless footman. He seems to have a crush on Rowena, doing anything she says to please her. He is doomed to dance with her forever when he tries to free the cursed duchess.
💠He has gray hair and light teal eyes.

Twyla - Genevieve's pet kitten. She tries to act tough in front of her enemies and is constantly fighting with Rowena's monkey, Brutus. She is friends with Felix and believes that she is related to the tigers of India.
💠Twyla is a small ginger kitten with green eyes. She believes she descends from Indian tigers. She has white fur around her eyes, nose, mouth, chest, and paws.
💠Twyla appears in Barbie as The Island Princess as she is sleeping during Queen Ariana's mice song.

Brutus - Rowena's pet monkey, who is just as cruel and arrogant as his mistress. He loves making Twyla angry and often spies on the princesses to find ways to get them in trouble with Rowena.
💠He has white and gray fur. He has long skinny arms and legs and small ears. He has no fur on his face, ears, hands or feet. Brutus is mostly gray but he has white fur on his chest and around his head. Brutus also has a long thin tail.
💠Brutus shares his name with Brutus (Barbie and the 3 Musketeers).

Mr. Fabian - An apothecary who sells poison to Rowena in exchange for stolen goods. He is eventually tracked down by Derek, who trades his horse for Queen Isabella's goblet.

Queen Isabella - The late mother of the twelve princesses. She is seen in the movie through a portrait that hangs near the entrance of the castle. Even in death, she helps her daughters discover the magical kingdom and the importance of family. Her goblet is stolen by Rowena to purchase poison from the apothecary.
💠She has reddish-brown hair and green eyes. 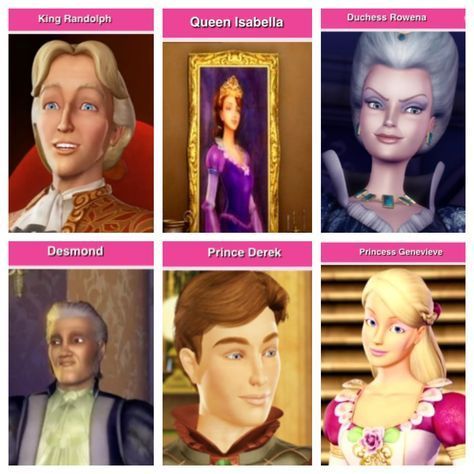 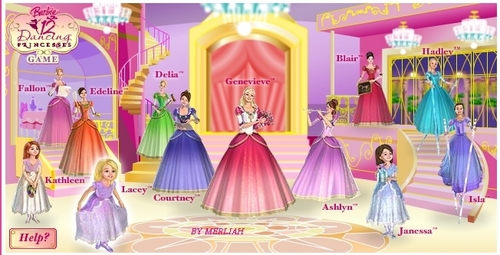 2
Barbie in the 12 Dancing Princesses
added by merliah 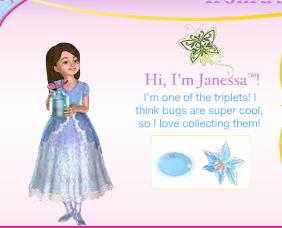 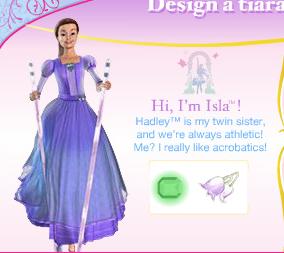 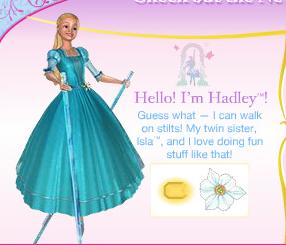 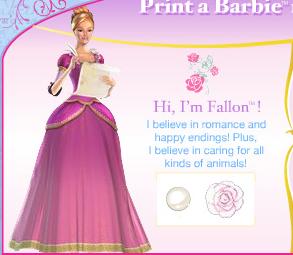 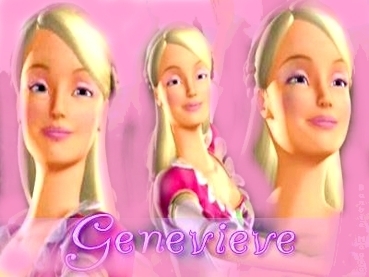 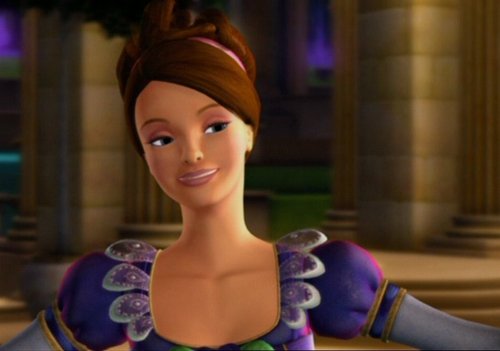 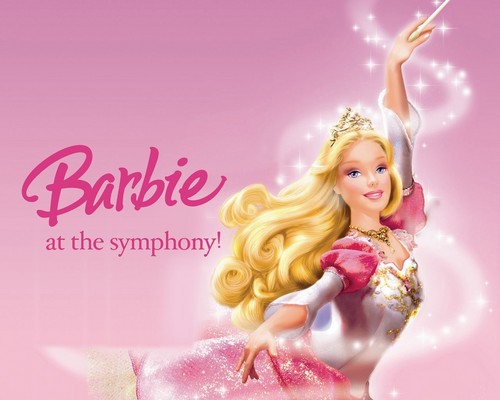 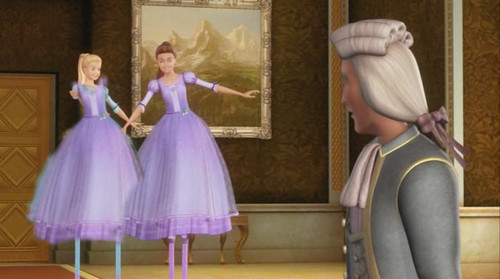 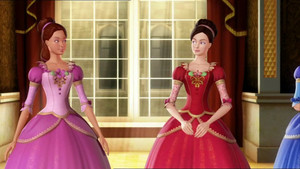 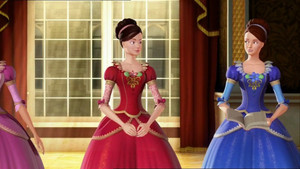 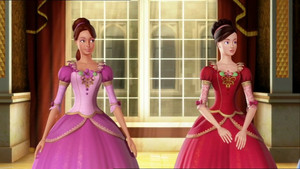 Official Description according to Kathleen's Quiz
added by coolraks12

1
Official Description according to Kathleen's Quiz
added by coolraks12 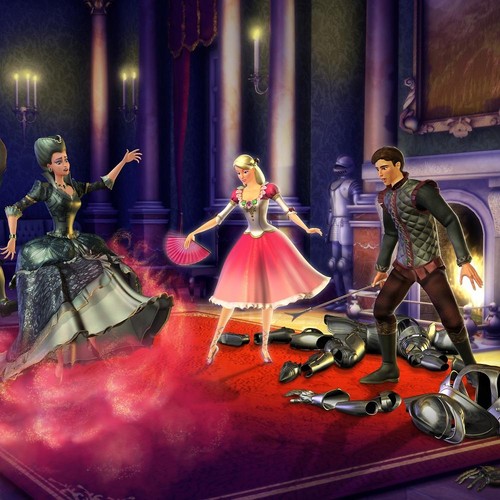 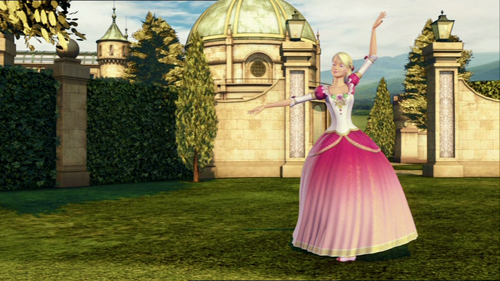