A short while later, after they had packed only the essentials into Lumina’s pearl purse, Kuda and Lumina set off through the sea.
“This has to be the right way,” Lumina said, examining her surroundings. They swam through a colorful coral reef, passing schools of tropical fish and fields of anemones along the way. “I’ve seen Aunt Scylla head this way every time she goes to town.
Suddenly, Lumina stopped. Kuda bumped right into her. Oof! On the wall in front of them, red-orange fire coral rose as far as the eye could see.
“It’s a dead end,” Lumina stated.
“Darn,” Kuda said, pretending to be dis-appointed. “We gave it our best. Let’s go home.”
But Lumina wasn’t ready to give up. She examined the wall more closely, looking for some way around it. She noticed a tiny opening high above. “There!” she exclaimed.
“Where?” Kuda replied, not looking all that closely.
“That opening! I bet that’s her shortcut through the coral,” Lumina reasoned, swimming toward it.
“That? That’s not an opening, that’s a dot!” Kuda objected. “Not even a big dot! You couldn’t push a guppy through there!” Lumina reached the opening and squeezed her way in. It was just barely her size. “Follow me, Kuda! Don’t be afraid!” Reluctantly, Kuda followed Lumina’s lead.
The friends entered a massive cavern covered with fragile fire coral. It was dark and dangerous, with giant slabs of coral hanging close to their heads.
“Slow down, Lumina!” Kuda begged. She smacked into a coral stalactite by accident.
“Uh-oh!” It broke off and started a chain reaction. Coral rained down from the ceiling of the cavern.
“Kuda! Swim faster!” Lumina urged as the tunnel started to break apart around them. They made their way through the collapsing coral until—crash! A giant boulder of coral smashed to the ground right in front of them, blocking their path. Lumina and Kuda retreated, but the path back was jammed with coral, too.
Lumina tried not to panic. There had to be another way out. She looked around frantically and spotted a side tunnel. “In there!”
They plowed through the tunnel’s narrow entry. Twisting and turning to dodge falling coral, Lumina coached Kuda. “Don’t be afraid!” she called. “Swim faster! You can do it!”
With a final burst of speed, Kuda and Lumina lunged to ward the opening at the other end of the tunnel. They swam through just as the tunnel collapsed behind them.
“That was fun!” Lumina cried, her eyes twinkling with delight.
“That was horrible,” Kuda mumbled.
Soon they arrived at a forest of waving kelp. Lumina noticed a thin path winding through the tall, dimly lit seaweed. “This is it! I know it! See that path? We just need to follow it.” She zoomed down the path, Kuda racing to catch up. They were so busy looking forward that they didn’t notice two gleaming eyes peering at them from behind the kelp.


Meanwhile, at the castle, preparations were under way for the royal ball. Everyone was excited—except Fergis, the ball’s honorary attendee. He wanted to stay at home with his plants. In fact, he wanted to skip this whole “inheriting the throne” business completely. But he also wanted to make his father proud. He wasn’t sure how to do both.But, Father, do I have to go to the ball?” he whined. “Yes, Fergis,” Caligo replied impatiently. “The ball is being given for you. Once His Majesty places the Pearl of the Sea medallion on you, no power on earth can stop me—I mean, you—from someday being king.”
Fergis pouted. “But I’ve told you—I don’t want to be king. I want to be a botanist.”
“And I’ve told you,” Caligo thundered, glaring at Fergis, “you’ll do what I say! You’ll go to that ball, find a suitable wife, and be named the next ruler of Seagundia!”
Fergis wilted like a flower under his father’s harsh words. “But I love plants, Father, I just love them,” he said in a small voice. “I love all of them: the Syringodium and the Rhizophora and the cheeky little Sargassum.” He smiled as he pictured a beautiful garden containing all of his favorites. He pulled a tiny flower bud from his pocket and sniffed it happily.
Caligo snatched the flower and threw it to the ground. “Forget about plants!” he ordered. “You’re going to be king and that’s the end of it, understood? Now get back to your waltz lessons.”
Fergis sighed heavily. “Yes, sir,” he mumbled, stooping to pick up the crushed bud his father had discarded. “Forgive me, Sargassum,” he whispered to it as he trudged out of the room.
Caligo rubbed his temples in frustration. He was so close to the throne he could taste it. He would not let his son’s flowery dreams stand in the way of the power that rightly belonged to him. Lost in his thoughts, he didn’t notice Murray slip into the room.
The eel cleared his throat, announcing his arrival.
“Ahhhhh! Don’t do that!” Caligo cried, practically jumping out of his skin. He did not like surprises.
The eel chuckled. “I can’t help myself.”
“Well? Did you find Scylla?” Caligo asked impatiently.
“I did, and she agreed to do it,” the eel hissed.
Caligo smiled nastily. “Excellent. Once she’s poisoned the king at the ball, I will finish off Scylla.” He drew his finger across his neck to illustrate his point. “I’ll be hailed as a national hero, and my son will be crowned King of Seagundia.”
“What if the guards grab her first?” Murray asked, poking a hole in Caligo’s master plan.
“They won’t,” Caligo answered confidently. “The Trident Squad is loyal only to me. And I’ve arranged that they will be the ones guarding the ballroom.”
Murray nodded in approval. “My, you have thought of everything.”
“I make it my business to. And once my son is king, I will hold the real power in the kingdom.” He rubbed his hands together greedily. Reaching into his desk, he retrieved a small sack of gold coins. He tossed the payment to Murray for a job well done and looked at a picture of Fergis on his desk. “Now comes the hard part,” he continued. “Finding someone to marry Fergis.”
Murray slithered toward the door. “Perhaps you should talk to Scylla,” he said slyly. “You know, she has quite a lovely niece.”
Caligo yanked Murray back into the room by his tail.
”Niece?” he asked.
“Goodness me,” Murray said, acting innocent. “Did I fail to mention that? Blond, about seventeen years old. Interesting coincidence, don’t you think?”
Caligo dropped Murray and stroked his chin in thought. “Hmmm.” Seventeen years ago he’d hired Scylla to make that blond baby princess disappear. Could this be the same mergirl? He eyed Murray dangerously. “Bring me that niece. I want to ask her a few questions.

As Lumina headed toward the city, Murray snaked his way through the kelp forest to her sea cave. He carried a coil of rope and a mermaid-size sack. When he arrived, he knocked on the front door. Rap. Rap. Rap. “Candy-gram!” he shouted in his best girly voice.
No answer.
He knocked again, louder this time. “Bob the Birthday Squid!” he tried.
Still no answer.
RAP. RAP. RAP. RAP. “Eel Scout Cookies!” he called. “Collecting for Snails Without Tails!”
Where is that girl? he thought impatiently. He peeked through the open window. Nobody home. He slithered inside and inspected each room. In the kitchen, he found a note Lumina had written. He read it aloud. “ ‘Aunt Scylla— You left behind your ball invitation, so we’re bringing it to you. See you at the castle. Love, Lumina.’ ”
With his tail, Murray crumpled up the note in frustration. “Victims! Never there when you need them,” he mumbled grumpily. He poked around the room, looking for something—anything—to make his journey worthwhile. Nothing! He zoomed into Scylla’s room next. “As long as I’m here . . . ,” he reasoned.
He nosed around Scylla’s dresser, looking at her various knickknacks. Then he spotted a keepsake box covered in seashells. He opened it with the tip of his tail and peered in. “Oh,” he gasped, admiring a small pearl baby bracelet at the bottom of the box. He picked it up to examine it more closely and flashed an evil grin. The bracelet carried the royal seal.
He’d found the proof. Now all he needed was the girl. 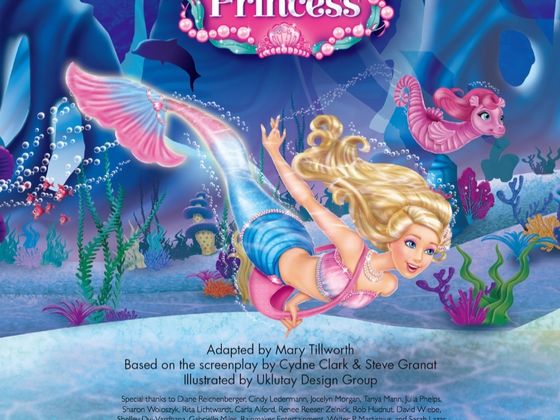 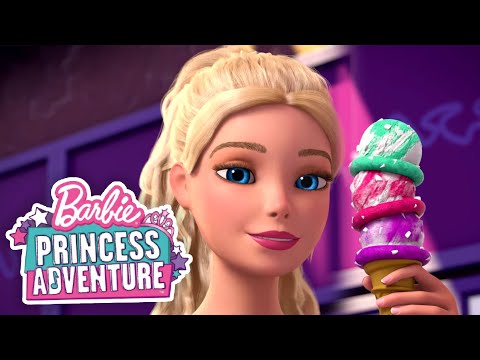 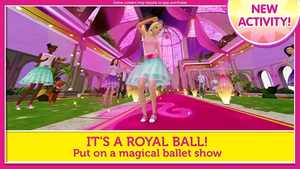 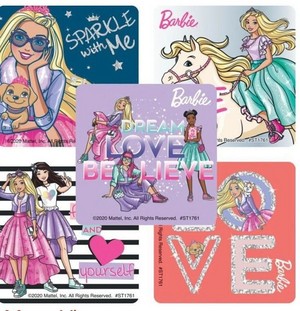 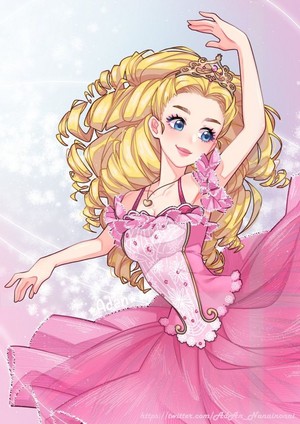 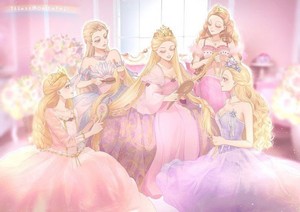 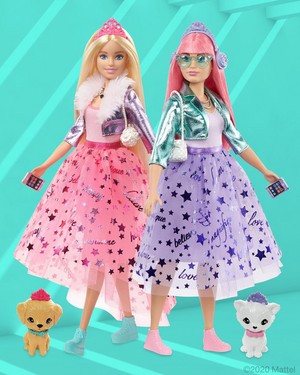 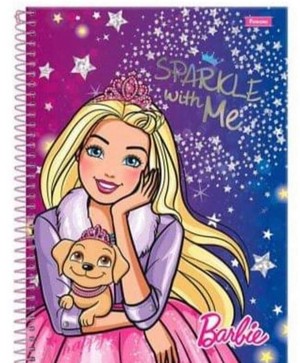 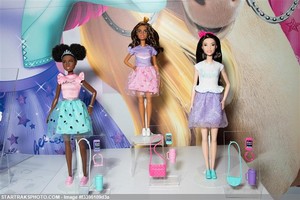 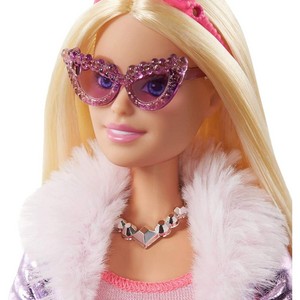 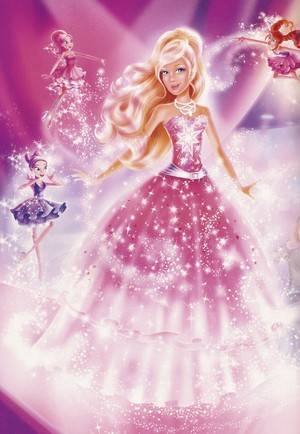 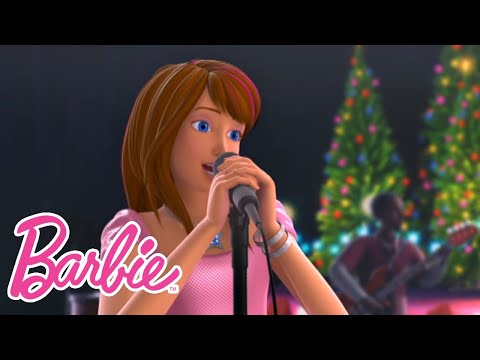 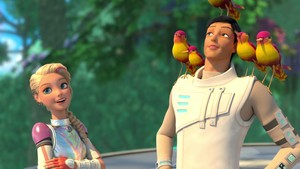 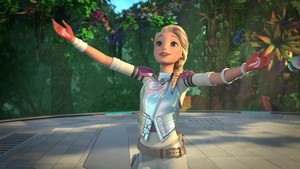 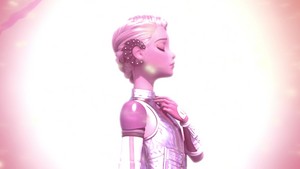 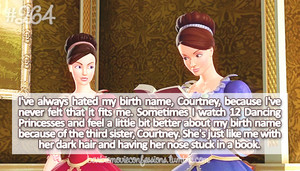 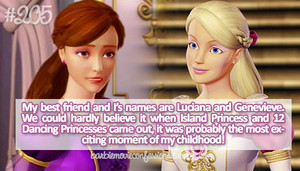