I think Year One, for the most part, is a compelling and emotional story, about Batman and Commissioner Gordon first year at cleaning up Gotham's crime. Plus, the story introduced Carmine Falcone, who is a fascinating and complex villain. The Dark Knight Returns is often considered to be the best Batman story ever made. While I can't deny that the story has some good moments, including a fight between Batman and Superman, I'm not a very big of the story. I find The Dark Knight Returns to be too dark and violent and it helped inspire future Batman stories to be overly-intense and joyless. Plus, the story made Joker a creepy murderer, rather than the goofy, random prankster that I prefer him to be.

Due to Frank Miller's success, he was given the job of writing the comic series, which was called All-Star Batman and Robin, the Boy Wonder. Unlike Frank Miller's previous Batman stories, the All-Star story got bad reception. It was considered to be bad and I agree. In fact, it might be the worst Batman comic ever made.

Before I get to the story's many problems, I do want to be fair and list the story's positive elements. The comic artwork was done by Jim Lee. Jim Lee is considered to be one of the best Batman artists and I'm one of his many fans. If you want to see some of Jim Lee's best artwork, I recommend checking out the Batman: Hush comics, which has some of the best comic artwork I've ever seen. Due to all the bad, off-putting, creepy stuff that the All-Star comics have, Jim Lee's artwork isn't as good as usual, but it's still quite impressive.

The story's only other positive element is some of the humor is funny and the keyword is some. Batman's petty, biased hatred of Green Lantern did make me laugh and I do admit that I enjoy poking fun at Green Lantern, too. However, the story's treatment towards Green Lantern goes too far, so this only counts as a half-positive element. Some of the things Batman says in this story are so stupid and bizarre, that I laughed, so you could count that as a positive.

The plot of All-Star Batman and Robin involves Dick Grayson, age 12, losing his parents at the circus. Instead of Bruce Wayne adopting Dick and helping the poor child deal with his grief, Batman kidnaps Dick and leaves him in the Batcave, without any real food to eat. Batman even attacks Alfred, for trying to give Dick a real meal. Batman wants Dick to fend for himself, in the Batcave and decide what kind of sidekick he wants to be. Black Canary, who is usually a heroic and useful person, shows up in this story as a violent psychopath, who is attracted to Batman. Batgirl shows up and she also acts like a reckless and violent person. The Justice League find out that Batman kidnapped child and they're understandably upset. Green Lantern confronts Batman about this and he tries to reason with Batman, but Batman makes fun of him and Robin violently attacks him. The Joker turns out to be the story's big bad, but this version of the Joker is a grumpy, sick murderer, who doesn't smile.

From my description of the plot, I think it's clear why this story is so bad. Frank Miller tried to defend his story, by claiming it was a parody. If that's true, I do admit that some parts of the story are funny. However, a majority of the story is offensive and mean-spirited. There's nothing funny, about heroes I admire, like Batman, Black Canary and Batgirl, acting like violent people, who belong in Arkham Asylum. Batman abusing Robin isn't funny. It's just creepy and it makes Batman look like a terrible person. The story often makes fun of Superman and Batman tries very hard, to make Superman look bad. While a few wisecracks about Superman is fine, the All-Star story goes too far. Superman is one of comics' most important role-models and this story is an embarrassment to such an important icon. While the Joker is well-drawn and actually looks quite cool, the way he's written is terrible. In All-Star Batman and Robin, he doesn't make jokes and he's not an enjoyable, interesting character.

Earlier, I mentioned that Batman: Year One is a good story, for the most part. That's because the story did one have questionable element and that was Commissioner Gordon cheating on his wife. In that story, Gordon felt very guilty about what he did and he told his wife the truth. This could of been an opportunity, to teach a lesson about how people can redeem themselves, regardless of their previous actions. However, the All-Star story ruins it, by having Gordon call the woman he has a crush on, while his wife is suffering in the hospital. Commissioner Gordon is supposed to be one of Gotham's most heroic citizens and the All-Star story features the worst version of Gordon I've ever seen.

A regular problem with Frank Miller is how he writes women. While I like Batman: Year One, I didn't like how Frank Miller wrote Catwoman and the All-Star story features worse depictions of women. There's a scene, where Vicki Vale, Bruce's girlfriend, is walking around her home, while barely wearing anything. The scene is supposed to be attractive, but it's gross and off-putting. Vicki is written as a shallow, weird pervert. Black Canary, who's supposed to be a true hero, violently attacks a group of guys at a bar. Wonder Woman is written as someone, who can't make good decisions and has to be kissed by Superman, in order to calm down.

The story's biggest problem is how Batman is written. In both lighter and darker Batman stories, Batman is supposed to not kill people, not even his worst enemies. In the All-Star story, Batman brutally injures criminals, including given them life-threatening injuries. In one scene, a group of criminals are on fire and does Batman try to save them, before it's too late? Nope. Instead, he makes-out with Black Canary. Also, Batman breaks the law, by kidnapping Dick and forcing him to live in the Batcave. He acts like a bully to Dick and constantly gives him a hard time, for no good reason. He even asks Dick if he's "dense" and "retarded." Also, Batman constantly refers to himself as "the God-damn Batman". That offends me, as both a religious person and a fan of the real Batman, that Bill Finger created. Bill Finger created my fictional childhood-hero, who I still look up to and respect. Frank Miller created a disturbing, crazy, unlikeable version of Batman.

I usually don't like writing negative reviews, because I don't like spreading negativity. However, All-Star Batman and Robin was such a terrible story, that I felt I had to let people know how bad it really is. If you like Batman, heroes actually being heroic and good writing, I recommend avoiding this story. Instead, I recommend reading better Batman stories, like Bill Finger's classic stories, The Long Halloween arc, Batman: Hush or the variety of other good Batman stories.

As for Frank Miller, I wish him the best. The All-Star comics were terribly concerning and I truly hope Frank Miller learns from his mistakes and starts acting more responsible and less offensive. I do genuinely believe he has talent, but that doesn't change the fact that he wrote the worst Batman comic I've ever written.

Frank Miller was determined to make Batman cooler, since the character was considered to be too campy. A lot of Batman fans consider Frank Miller's Batman to be "the real Batman", while treating Bill Finger's stories and Adam West's performance as jokes. However, if being a Batman fan has taught me anything, it's that a real hero treats others with respect and acts like a positive role-model to others. Yes, the classic Batman comics and the 60's TV show are campy, but they have a Batman, who's a wonderful and loveable person. Sorry, Frank Miller, but you didn't make Batman cool. Batman already was cool and that was thanks to Bill Finger, Adam West and all of the talented writers and artists, who created a hero that will live on for generations to come. 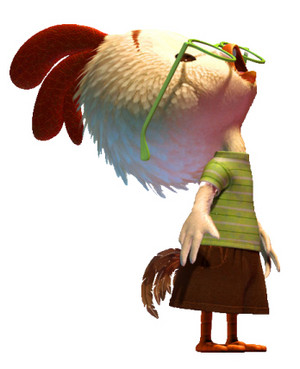 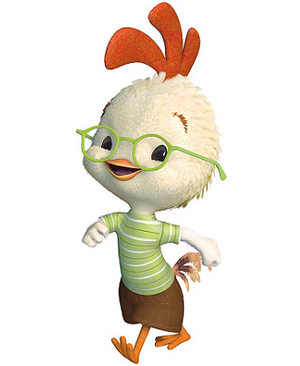 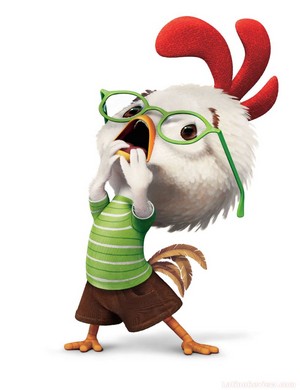 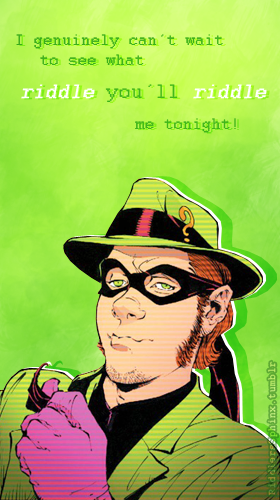 The Riddler
added by LillyBlossom
Source: me 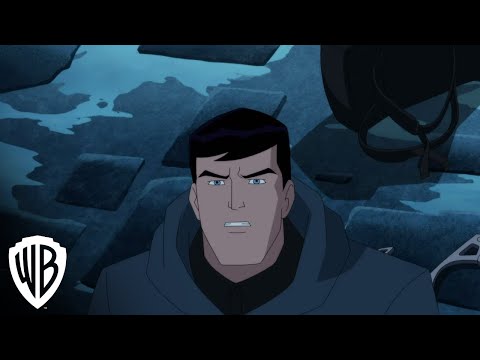 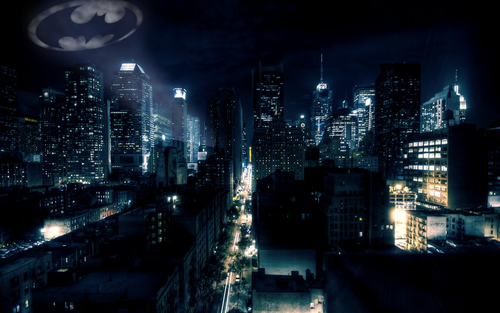 1
Batman Black and White
added by MoniBolis
Source: Berni Wrightson and the BATBLOG 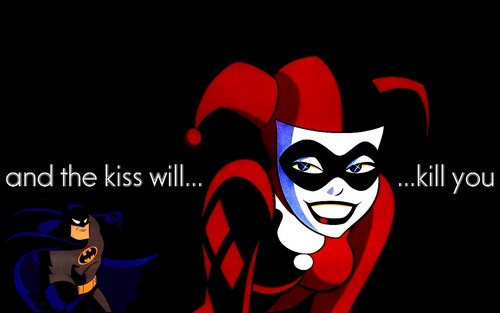 3
The Kiss Will Kill You
added by misanthrope86
Source: Warner Bros / edited by me 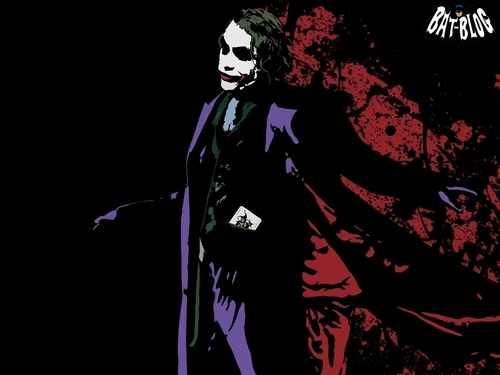 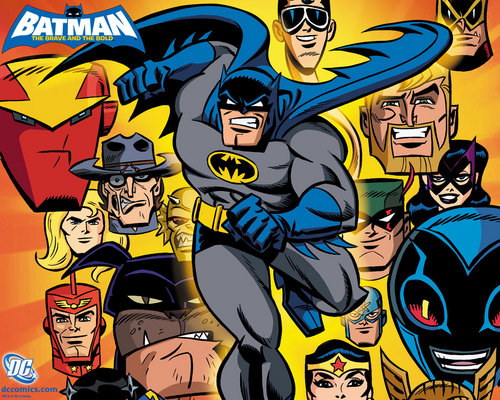 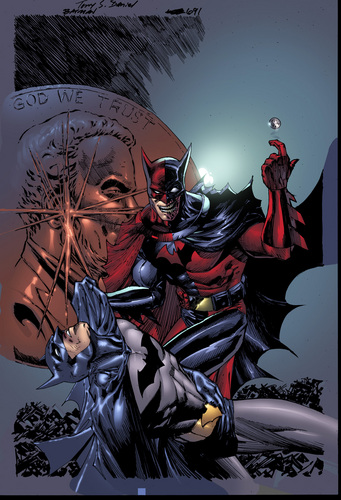 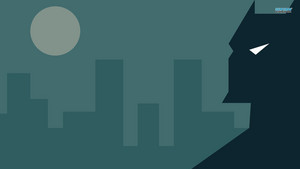 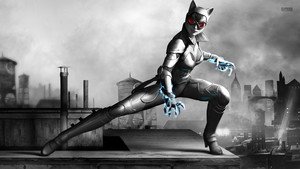 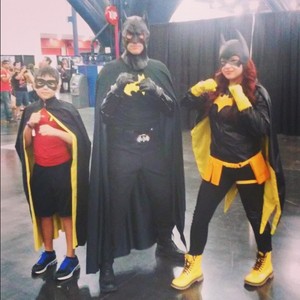 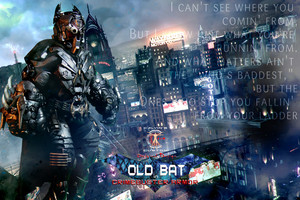