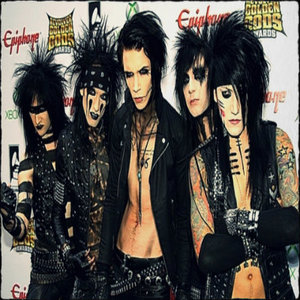 1. "Life isn't about how popular you are… What girl or boy you are dating or who you know. Life is about always being true to who you are or what you believe in. Never let anyone convince you that their way is better than your way. In the end all we have is our hearts.. and our minds. This is the reason we sing.. this is the reason we cry… this is why we live." - Andy Biersack

2. "Bathe in your riches and friends, I'll stay here with my songbooks and pens" - Andy

3. "Pages of revelation lie open in your empty eyes of blue" - Andy

4. "I pray that I was all wrong about that prayer" - Andy

5. "Something pure to burn away the darkness that hides inside my mind" - Andy

7. "Just because we wear make-up don't mean we can't kick your a**!" ~The Black Veil Brides

8. "No matter how much you've worked so hard to be as successful as you are, there will always be those ignorant haters who don't understand."- Jinxx

9. "Creating art or something beautiful makes you a more fulfilled person than they can ever be because they're caught up in what they hate rather than what they love." - Andy

10. "It's important to remember though that when looking at these situations you have to be able to see the difficulty anyone faces in a breakup and
how hard that experience is. No one wants to be alone, but sometimes in life, in order to be healthy..it is paramount to your happiness. I truly do
appreciate all the love and support you have all given me over the years in every facet of my life" - Andy

11. "Each and every one of us has a fire that burns inside us and they can try like hell to put out that flame but as long as in our minds we know who we are meant to be, they don't stand a chance." - Andy

12. "I had a goal, I had a dream…and at the end of the day no matter what people say to you as long as YOU know who you are as a person NOTHING in else in the world matters." - Andy

14. "As we grow up, we learn that even the person that wasnt supposed to ever let you down probably will. You will have your heart broken probably more than once and it gets harder every time. You'll break hearts too, so remember how it felt when yours was broken. You'll fight with your best friend. You'll blame a new love for things an old one did. You'll cry because time is passing too fast, and you'll eventually lose someone you love. So take too many pictures, laugh too much and love like youve never been hurt because every sixty seconds you spend upset is one minute of happiness you'll never get back." - Andy

15. "Sometimes in life you feel the weight of the world... it can push you down and make you fear it. it can cause stress and pain...but in those moments...remember all that you have done in your life...and what great things you can do in the future.. The feeling of burden may not subside, but the fire you carry in your heart will burn stronger than ever when you live through it. Never let anyone...or anything... steal your flame. i once though of calling our first record "alive and burning" after a song i wrote... i know now that was a silly notion...we aren't here to..."burn"...we are here on this earth to reach for all that we can get... to see the brass ring and strive for it...not via sardonic tendencies but rather through our own personal strength... to see our heroes and say to ourselves... i want to be better.. i want to be the best i can be. so please...if nothing else... continue to live as you are... and reach for all you can take... you are all beautiful people. Live it." - Andy

16. "Being normal, what's that? That's a setting on a washing machine, no one wants to be that." - Ashley

17. "Don't ever let anyone tell you that what you create isn't beautiful or in any way less valid. Fight the good fight BVB Army. Rebel. " - Andy

18. "Create your own reality...become your own rockstar, find your passion...and we will be here every step of the way with you."
- Andy Biersack

18. "Rock n roll isn't meant to be taken so seriously, I think sometimes people forget it's meant to be fun. A rock show is meant to be a time for people to have fun and let go of the drudgeries of life...."
- Andy Biersack

19. "the only certainty is that we never know what tomorrow holds. We live for today, life is short, so let's enjoy it together while we can"
- Jinx

20. "Everything happens for a reason and although it may not seem like it sometimes, you are exactly where you should be. Make the best of it." - CC

22."I am offended that you said that this is makeup.. I was born like this.. This is my skin" -Andy

23."walk with me, talk with me...imagine there is nothing that can harm you in the world" -Andy

30. "I love my feet. I love to be on them. Do you have any idea how many people would be killing to be standing in thus position right now?" - Andy

31. " I don't know how many of you have ever seen a giant snowman after it's been made, but... Like a big one. Typically they do not look anything like the cartoon snowmen. They actually just look kinda dirty and they just look dirty and gross. They should really call them snow hobos because they're just nasty and they kinda sort of have a bucket for a head, and just a stick arm and it doesn't... What they're wearing doesn't make any sense.... So yeah snow hobos. That's kinda the new thing.. For me anyway." - Andy

32. "If you could be anything would it be a ninja or a pirate and I said pinja." - Andy

33. "Live your life, listen to your music way too loud, and be as crazy and as different as you want to be, and always remember you're not alone." - Andy

34. "We will be whatever they need us to be. Call us emo's, liars, and cheaters...tell people how awful we are and how little talent we have...do whatever it takes to make themselves feel better because at the end of the day, we are strong, we can take it. We don't need their approval to justify our lives. Each and every one of us has a fire that burns inside us and they can try like hell to put out that flame but as long as in our minds we know who we are meant﻿ to be, they don't stand a chance." -Andy Biersack

35. "I want every one to stick your middle fingers in the air, and say fuck you to the mother fuckers who judge you for being you" -Andy Biersack

36."It's not rape if you yell surprise…" -Andy Biersack

40. "Never let anything...Or anyone steal your flame. Never Give In! Never Back Down!" - Black Veil Brides

41. "Were gonna Set The World On Fire" - Black Veil Brides

42. "Suicide isn't cowardly. I'll tell you what is cowardly; treating people so badly that they want to end their lives." - Ashley Purdy

43. "When someone says 'you emo fag' say 'FUCK YOU, YOU FAT PIECE OF SHIT!" -Andy Biersack

44. "We are the bastard sons of your media culture, Our minds, eyes and bodies were born of your exclusion; an illusion you hide behind. You don't love a God, you love your comfort. To you we are filth, we are dirty, so be it." - Black Veil Brides

45. "As we grow up we learn that even the person that wasn't supposed to ever let you down probably will. You will have your heart broken probably more than once and it gets harder every time. You'll break hearts too, so remember how it felt when yours was broken. You'll fight with your best friend. You'll blame a new love for things an old one did. You'll cry because time is passing too fast, and you'll eventually lose someone you love, so take many pictures, laugh too much and love like you've never been hurt because every sixty seconds you spend upset is one minute of happiness you'll never get back." -Andy Biersack

46. "I had a goal, I had a dream, and at the end of the day no matter what people say to you, as long as you know who you are as a person nothing else in the world matters." -Andy Biersack

49. "Overall the theme is about never giving in… not letting anyone tell you what to do or take anything away from you. Always being yourself, whatever that may be. The content obviously takes a darker and romantic approach to relationships about love and loss, as well as overcoming adversity in everyday life. Generally, just being tough and standing up for what you believe." - Ashley Purdy

51. " I just switched my phone to airplane mode, but when I threw it in the air it didn't fly..Worst Transformer Ever..." - Ashley Purdy

54. "Yeah Jake and Jinxx play guitars, Andy sings, I run around topless and play for the ladies." - Ashley Purdy

55. "Reverse petting zoo. You pet the animals, and they pet you back." - Andy Biersack

57. Interviewer- "What are some of the pranks you have done on pass tours?"
Jake & CC talk at same time "Blah Blah" Look at each other then
CC- "Fill a water bottle with vinger?"
Jake- "What? We haven't done that?"
CC- "Well I have"
Jake- "When?"
CC- Laughs "Don't worry about it."
Jake- "Oh man, I'm not drinking any more of the water bottles, I'm only drinking the ones that are...closed"

58. "When we talk to our audience about being yourself and being who you want to be, its not about being sad about it-its about shoving your middle finger in the air.
We try to show people that you shouldn't be apologetic for being the way are or the way you want to be. You dont need to be depressed or 'emo' for being who you are. You should emphasise and celebrate your differences.
If it weren't for peoples differences, the world would be boring as hell. . .or boring as heaven depending on the way you look at it. There are a lot of bands who seem happy to address youthful alienation by saying 'Yeah, you're sad, we're sad. lets wallow in it'.
Thats not our stance on it all. Its the rock n' roll idea of having a good time, party, be yourself and fuck everyone else i think our fans know that what Black Veil Brides ate saying is 'Hey, its alright to be weird or different'.
IN THAT WAY, WE REPRESENT THE ULTIMATE OUTCASTS." - Andy Biersack BVB ARMY '11 ROCKSOUND MAGAZINE

59. "For everyone that calls us 'fagots' for wearing make-up, fuck you! Because we fuck ten times more chicks in a week than you! BOOM!" ~ Christian Coma (CC)

60. "We''d like to be welcomed with open arms and open legs" ~ Andy Biersack 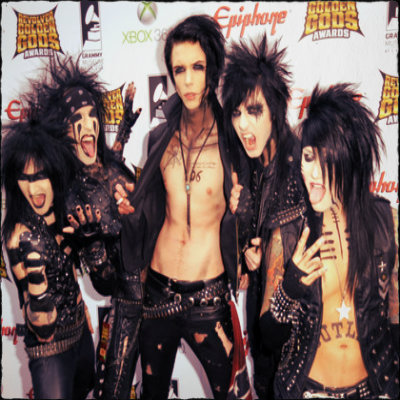 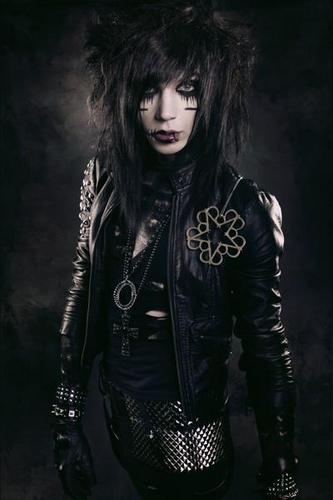 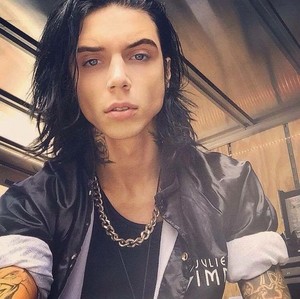 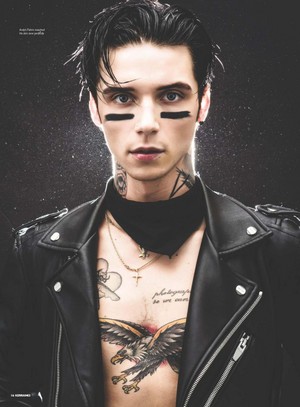 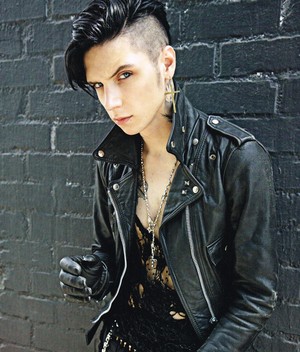 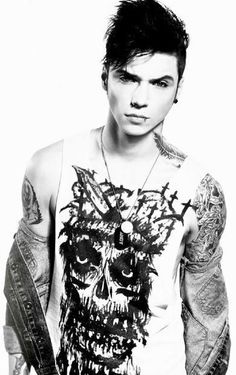 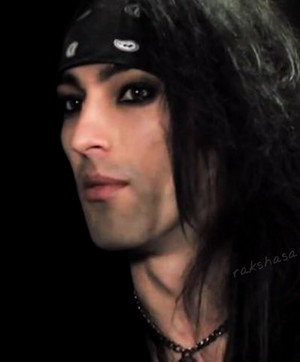 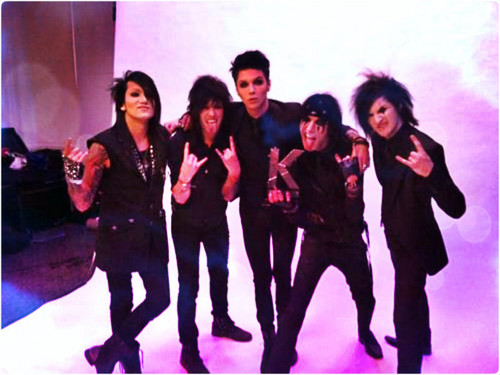 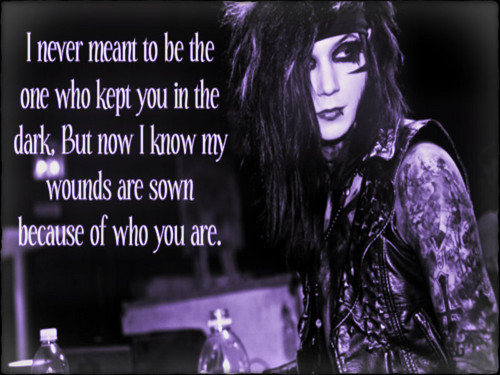 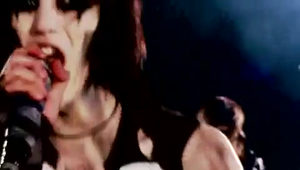 1
Knives And Pens
added by KaterinaLover 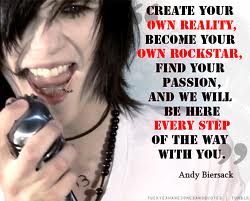 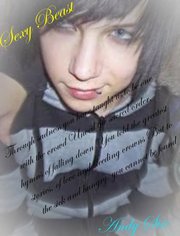 Black Veil Brides
added by rippersbunny98
Source: @To The Photographers Who Took These Pictures 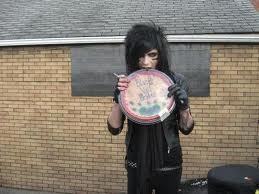 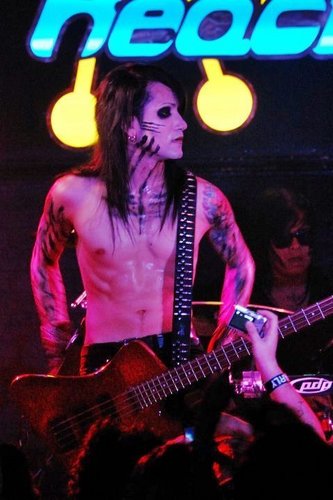 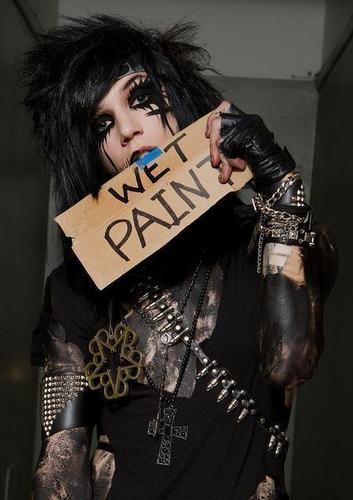 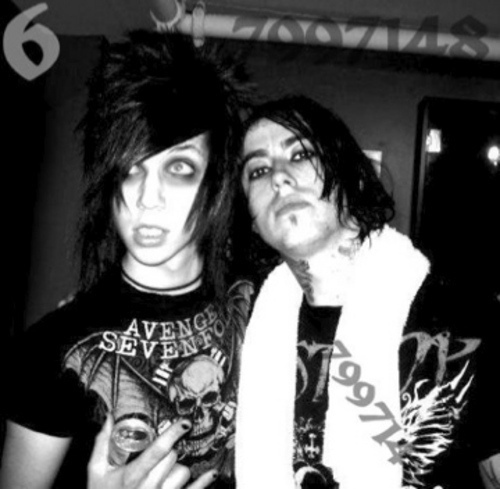 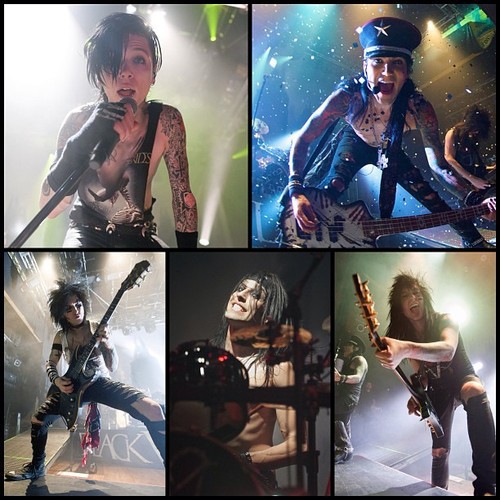