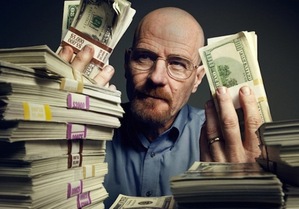 Walter White and all his cash!
The process of breaking bad is full of trial and error. Walter White transformed from a mild-mannered, well-coiffed high school chemistry teacher into a terrifying, internationally-renowned bald drug lord in only five seasons—we should cut him some slack. But that doesn't mean that we can't learn from his mistakes. Here are six places Walter White shouldn't have hidden his money—and some much better tricks you can use to keep your money safe.

FIRST SCORE IN THE HEATING VENT

You'd think that, with all he gave up to get it, Walt would have taken better care of his first batch of money—but...
continue reading...
NM store sells 'Breaking Bad' bath salts
posted by BathingBad 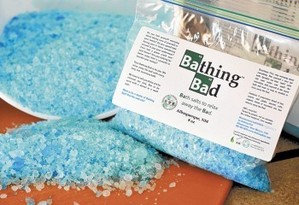 The Albuquerque-based Great Face & Body is selling a line of bath salts that look very similar to the pure meth sold on the drama show filmed in Albuquerque.

Co-owner Keith West-Harrison says he and his partner Andre came up with the idea last week.

"I just got an email from the UK saying, 'How much would it cost to ship me these?'" West-Harrison said.

He said...
continue reading...
1
Breaking Bad Final Season - How Will It End?
posted by CharGrades
Heading into the final half of the final season, Breaking Bad is running high on 5 years of momentum. As the a full-steam-ahead plot machine begins its sprint to the finish, we here at link polled some of our (figurative!) methhead staff writers to answer the question on everyone's mind: what happens at the end of the ride?

Here's what WE think will go down:

Walter has often been compared to a Shakespeare villain. He’s sociopathic, manipulative and power-hungry. Breaking Bad has always felt Shakespearean to me, in part because the perpetually high stakes, but also because...
continue reading...
1
AMC International Launches New Breaking Bad Social Netwrork
posted by BreakingB
The new AMC Breaking Bad GraffitiWall makes it possible for fans of the hit television drama to tune in while coming together and interacting in real-time in an immersive online experience that is an extension of the show.

The new social network technology lets fans become their favorite Breaking Bad characters, personalize their Wall with different locations and props from the show, as well as an array of graffiti tools. Fans can reach out to chat, interact and build their own personal networks.

Please visit and join here:
www.sundancechannelasia.com/GraffitiWall
1
Breaking Bad Season 5 Episode 11 online CONFESSION
posted by gaamapehl
After last week's premiere blew the doors off how quickly Breaking Bad would go from Hank's realization to direct confrontation with Walt, "Buried" eases off the gas pedal a bit, delaying the bullet-train plot momentum in order to pit family members against one another. The investigation doesn't ramp up at the DEA. Nobody breaks down any doors or makes any arrests. No news crews splash the identity of Heisenberg across the country. Instead, the battle rages on between the Whites and the Schraders. Hank and Marie, on the side of justice, truth, and safety for Walter Jr. and Holly, want to expose Walt's misdeeds as the actions of a madman. Walt wants to hide all the evidence as best he can and take his secrets to the grave; Skyler, in the moments after hearing Walt's cancer has progressed, decides to slow the progression of the investigation to aid Walt's intentions.
More Cards
1234567891011