6
It Could Be Witches
posted by Dragonclaws 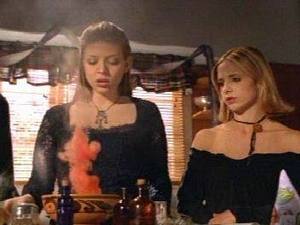 Tara's good magic
Buffy the Vampire Slayer, while at its most core element is about a girl fighting vampires, featured a wide variety of supernatural elements throughout the course of the show. One of these elements is magic, and more specifically witchcraft. Witchcraft has appeared in several different forms, from evil to neutral to self-destructive to pure good tied into the feminist nature of the show.

Our first look at witchcraft is in the season one episode “The Witch”, in which Amy’s crazy mother hurts everyone in her path with her evil magic on her way to becoming a cheerleading superstar. Here witchcraft takes the creepy Halloween look with general ooky stuff as well as a cauldron and a black cat. As far as we would know here, witchcraft is just plain evil.

This somewhat changes in the later episode “I, Robot… You, Jane”, also in the first season. When Jenny Calendar reveals that she knows about the supernatural world, Giles asks her if she’s a witch, which she denies because she’s not that powerful, instead referring to herself as a technopagan. She uses her knowledge of magic and technology to help bind the demon Moloch, and Buffy is able to kill him afterward. An implication of the episode is that if Jenny were a witch she would have been more powerful but still would have helped Giles and the others, making witchcraft more of a dangerous tool that can be used for good or evil depending on the nature of the witch.

In the second season it is revealed that Jenny Calendar is in fact Janna of the Kalderash, the gypsies who cursed Angelus with his soul. While it certainly made the world better by giving the Scourge of Europe a conscience, their motives were based purely in vengeance as they wanted him to suffer an eternity for his crime of killing a beloved member of the Kalderash. This gypsy magic comes from a bad place, but Jenny turns it around by reproducing the same magic for the purpose of restoring Angel’s soul because he is a good guy. Angelus kills her before she can do anything, but Willow taps into something powerful and is able to perform the magic properly.

By the third season Willow is an increasingly powerful witch who uses her magic for the good of the group. Magic has evolved well past the Halloween look, and is more like chemistry with smelly ingredients and a bit of special effects magic. The whole show is more convoluted and deals in moral shades of grey, leaving the witchcraft-is-evil theme behind in the dust.

Xander: “It could be witches! Some evil witches…” (Willow and Tara glare) “…which is ridiculous, ‘cause witches – they were persecuted. Wicca good, and love the earth, and woman power, and I’ll be over here…”
--Episode “Once More, With Feeling”

In the fourth season, Willow’s magic becomes more associated with the Wiccan religion (or Joss’s version of it) and femininity. Her magic, though she may lose control of it, is mostly good and serves the forces of good. When she begins her relationship with Tara, the magic they practice together serves as a metaphor for the intimacy of their relationship at a time when Mutant Enemy couldn’t get the okay to properly depict a sexually active lesbian relationship. Tara’s magic is connected to the earth and femininity, making witchcraft a part of the feminist nature of the show.

Then in the fifth season and into the sixth season, Willow starts abusing witchcraft. Her extreme power makes her lose sight of her responsibility to use this power wisely. Though she has no Uncle Ben as in the case of Spider-Man, she has a Tara and a Giles to try to get through to her that with great power comes great responsibility; unfortunately, she ignores them both. Her use of magic to control people loses its connection to Wicca, becoming instead something dark (aesthetically as well as metaphorically). Magic eventually becomes associated with narcotic addiction, not just Amy and Rack’s brand, but all magic including Wiccan magic. Tara uses magic responsibly, in that she doesn’t control people, and she is able to command magic without succumbing to addiction.

At Tara’s death, Willow goes off the deep end and becomes a dark masculine figure as she uses her power for revenge. Keeping in line with Joss’s feminist themes, Willow’s evil power is entirely different looking from her Wiccan power, while Giles fights her with all the power of a Devon witch coven. Giles is sent as a sacrifice, his role to tempt Willow into absorbing his borrowed power, which connects her empathetically to all the people of the world. Willow’s still off the deep end, and she tries to end everyone’s pain by ending the world, connecting her power with a satanic temple, until Xander shows up and talks her down. The instant she lets go of her vengeance, she loses her dark masculine appearance and reverts back to her light feminine appearance.

In the seventh season, Willow is in a tenuous state of recovery from her Darth Rosenberg days, technically on the side of good but liable to tip over to the dark side with a little nudging. She makes use of the good Wiccan magic, as well as some of the darker sort unassociated with Wicca. Her final act of magic in the series is tied into the feminist message of the last episode “Chosen”, where she rewrites the evil Watcher’s Council magic intended to keep the Slayer under their control and instead lets the potential Slayers access their power. During this process, her hair turns white as a contrast to her black hair of Darth Rosenberg period, and afterward Kennedy calls her a “goddess”. Her once evilness is shed, to be replaced with a good powerful magic associated with feminine liberation.

In conclusion, the subject of witchcraft is depicted in several ways throughout the course of the show. I suspect the early depiction of witchcraft as entirely evil is a result of the writers not having a solid idea of where they wanted to take the show. This and some aspects of the Buffyverse vampire mythology as depicted in the first season lead me to believe that some parts of the first season are incongruous with the whole of the show, even as they are ostensibly Buffy canon. Whatever the case, it is true that the depiction of witchcraft changed with the evolution of the show. 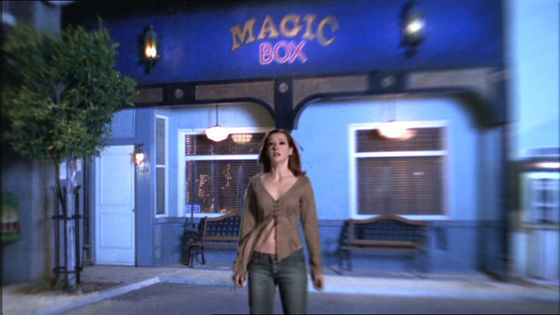 Willow, high on Rack's magic
twilight10000, jemgrl323 and 4 others like this
adwbuffy Great article Dragonclaws. You describe everything that Joss had said on the show. Love the pictures, in my opinion Willow was a dark wiccan in Season 5 and most definitely Season 6. However learned to control her powers and the darkness that was rising up in her.
TheBigBad Very good article indeed. I've never thought that much into the development of magic throughout the series, but Joss did a great job of the various levels and types of magic. However, I disagree with adwbuffy about the comment on Willow's control over her evil persona, Dark Willow. During the Season 8 comics, Buffy and Giles fear that Willow will revert to her evil persona, due to their constant reliance on her. Buffy is later sent into the 23rd Century, where she confronts Dark Willow, who exists in this future, whereas all the other Scoobies have died. This shows that with this powerful dark magic, she is possibly able to live forever and proves that it still remains somewhere inside of her, laying in wait of the day it will return lol 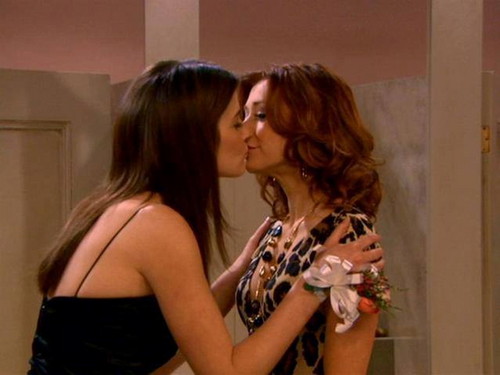 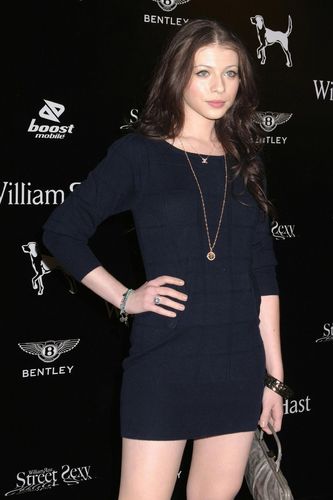 1
Michelle Trachtenberg
added by spikes_girl
Source: Not mine

2
Willow And Tara: How Joss Whedon Put Lesbian Sex On TV
added by queergermangirl
Telling the story about why Tara and Willow didn't kiss until season 5 and how Joss Whedon and the network dealt with the topic of homosexuality on the show.
video
bvts
willow and tara
willow
tara
wllow rosenberg
tara maclay
lesbian
gay
kiss
joss whedon 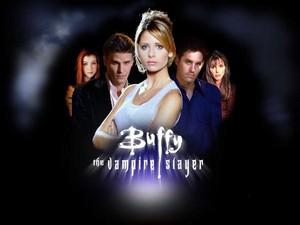 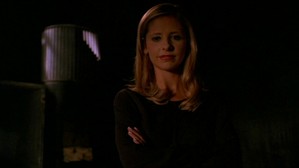 Season Seven of "BUFFY THE VAMPIRE SLAYER" has been a favorite of mine for years. But it has been rather unpopular with many fans of the series. And I suspect that this unpopularity may have centered around the character and main villain of Season Seven – the First Evil:


"THE MEANING BEHIND THE FIRST EVIL"

If there is one nemesis that has baffled fans of "BUFFY THE VAMPIRE SLAYER" for the past six to seven years, it would have to be the First Evil. This entity first made its appearance in the Season Three episode, (3.10) "Amends" and became Buffy Summer’s main nemesis in Season Seven, the...
continue reading... 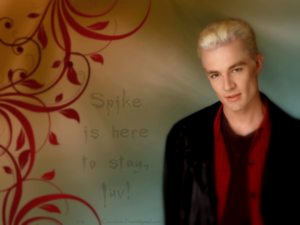 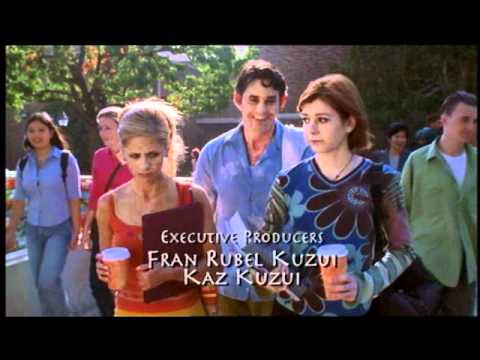 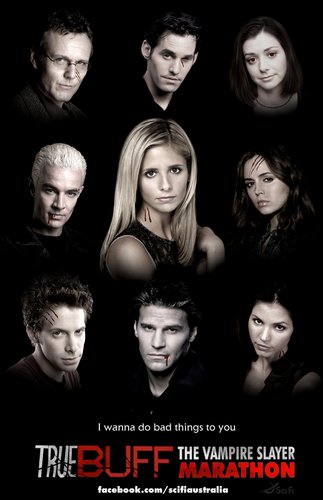 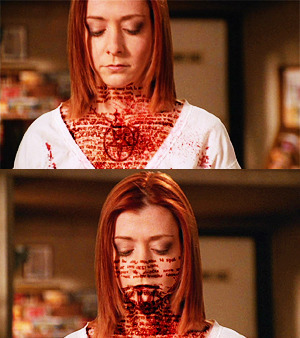 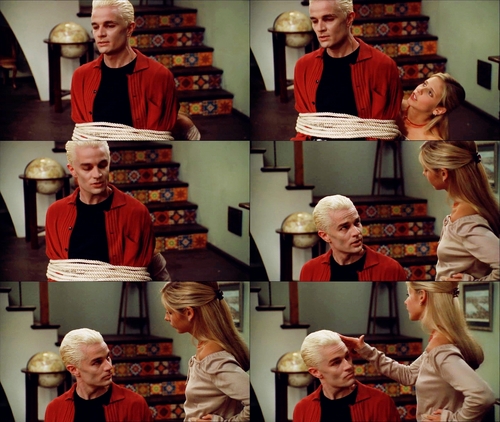 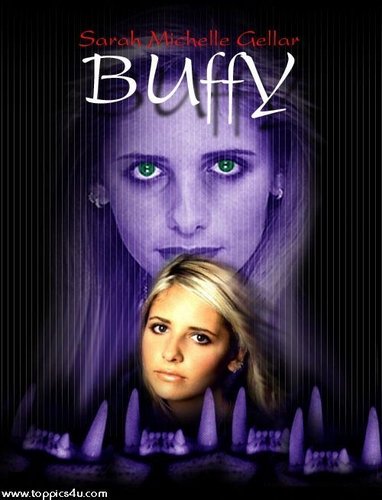 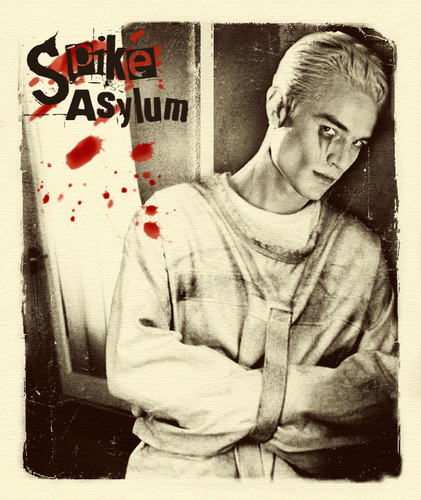