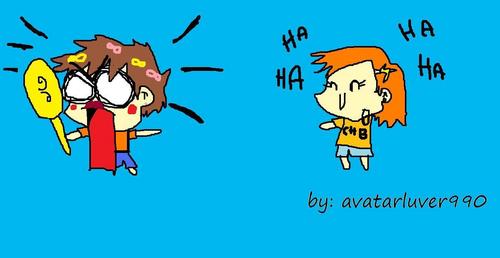 
I don't know about you guys, but to me life is weird. I mean, you're living a normal life and before you know it your in a big pickle! But I guess that fits me 'cause my life isn't normal at all! I live in an Orphanage 'cause my mom left me when I was a toddler, and the Orphanage Director is a real pain in the butt! Also, weird things happens to me all the time! Like, one day I burned out the electricity power 'cause I was mad at some kid that called...
continue reading...
2
Colby's tale 2
posted by Tigerslily
Arron’s P.O.V
_____________________________

Cool I thought as Mr. Boone told us where we were to go. I walked beside Destiny and Colby. The girls were talking away, I walked in my room first and seen this last person I wanted to see. I’m a happy person most of the time, but this one person I’ve known for less then 20 minutes, has made it to my ‘I hate with a passion’ list.

“oh hey, I remember you, you’re the dude that was with the two hot chicks” he looked me up and down.

“There my best friends, yeah” His smile got a bit wider.

I seen fog, darkness, but it wasn’t night, no if it was night I would feel at ease, I always felt good at night. Relaxing, my dad told my last night about Greek myths, yes he told me, his nine year old daughter that she was half Greek god. He had been drinking that night to so I figured he was just crazy, he never had anything to do with me, I was just, Here. He slept through the day and was up at night. He name is Dreke Fiser. I was done with him, I couldn’t take it, and I’m glad I left, for I found the best place in the world for me.