17
Hook and His Swan: An In-Depth Discussion of Why This Ship Deserves To Set Sail
posted by delenasalvatore 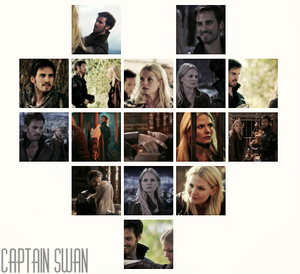 source: tumblr, submitted to fanpop by dacastinson
I have a confession to make: I am currently in the throes of an addiction. An addiction to Captain Swan. The absence of any new scenes of them has only succeeded in making it worse. I have now resorted to googling 'Emma and Hook' every day or so in case I come across some wonderful spoilers/pics/news of them. Pretty soon, I discovered that not everybody liked or supported the shipping of Emma and Hook, and I realised that although their popularity seemed to be strong, there were a lot of arguments against them too. I thought it was worth looking at some of them in more depth, because in my opinion, the writers and producers have more reasons to give us Captain Swan than not do anything with them at all.

The people who are opposed to an Emma and Hook pairing seem to have been coloured by their dislike of Hook as a character or their conviction that because he's a 'villain' then he shouldn't be with someone like Emma. Some seem resentful and annoyed of all the attention CS are receiving. Others think the two don't have any chemistry, or openly roll their eyes, saying that Hook has chemistry with everyone, and that it doesn't mean anything. Obviously chemistry is such a subjective thing. Some people see it, some people don't, and some people simply see what they want (or don't want) to see. I saw in the comments on one fan forum that someone thought Hook had "more chemistry with CORA." I mean, REALLY...?! If you don't like Captain Swan fair enough, but saying he has more chemistry with Cora is ridiculous and bordering on insulting. The chemistry Emma and Hook share is undeniable, and I can only assume that the fans who grimly persist in denying it must have: a) left the room when the two had a scene together, b) wore a blindfold and earplugs, or c) don't want to see the potential CS have, because another ship is obstructing their view.

While it may be true that Hook uses his charms on all the ladies to some degree, that doesn't mean we should overlook what he has with Emma or dismiss it as irrelevant. Let's look at the episode in which Captain Swan was introduced, 2x06: Practically every scene they had in this episode acted as a showcase to their chemistry and potential as a ship. Take the scene when Hook notices Emma's hand is bleeding, bandages it and ties the scarf he uses with his mouth. (Even writing/reading it, it sounds sexual). It's not like the writers HAD to put that in the script. Or when she grabs him in a full-bodied embrace to prevent him from walking into the trip wire. She could have grabbed his arm and pulled him to one side, but did she? Don't tell me that the writers weren't secretly having a ball with Captain Swan in that episode.

Emma and Hook's chemistry goes beyond the superficial however. There's a real connection there. Emma hides it well, but you can definitely see it. They've both tragically lost people they cared about; they both hide their true feelings behind a biting wall of sarcasm; they're capable of loving deeply, and have been wounded by love; they're very stubborn and refuse to back down for what they believe in; they've shown how far they're willing to go to fight for what they want; they're alike in a lot of ways. Colin O' Donoghue said in an interview with TVline that in a "weird way", Emma and Hook "respect each other because they can see elements of themselves in the other person." Jennifer Morrison agrees, stating "What I see, and what I think fans see, is that they're very kindred spirits. They both come from being thieves and finding creative ways to survive life. When we work together, I feel that, he feels like a real partner." She's not sure if it feels romantic "right now", but adds "She's met her match in him in other ways though, so there's a connection." link

As a result of this, I think Hook and Emma become more vulnerable when they're around each other. While they climb the beanstalk, he tries to analyze her, correctly musing that "Love has been all too rare in your life, hasn't it?" Emma notices Hook's tattoo and accurately guesses that Rumple took more than his hand from him. The fact that she hand-cuffs him at the end of the episode because she can't trust her own instincts is huge. The fact that Hook took it so badly is equally significant. He's a pirate after all, and as Emma said, he should be used to people NOT trusting him. He wouldn't have reacted with such simmering anger and felt so betrayed if he didn't like and care about her. Then there's the sword fight, and the fact that he had every chance to kill her then and there, but was more intent in engaging in flirty banter and trying to talk and charm her out of it to go ahead. I'm disappointed there have been no new scenes of them since the show returned: I thought that with Hook skulking around Storybrooke, Emma would have HAD to run into him at some point. But I was intrigued when Hook's ship docks at the beginning of 2x10 and there are two swans swimming randomly about in the water, even though it's pitch black outside and there's no reason for them to be there. A coincidence? In this show? I think not.

Of course there are things to consider. There are obstacles in the way, but then...well, isn't that kind of the point when it comes to telling a love story, especially a 'timeless love story' that the makers of 'Once' seem so fond of re-creating? Let me speak candidly: TV shows have no interest in depicting clean, angst-free romances. Even Snow and Charming's romance was littered with drama on all sides. No, the producers and writers want to torture the audience into fearing that their beloved ship might never happen. When they're done, they'll torture them some more, until fans are on the edge of their seats, their fingernails are bitten down to nubs and they're thinking "I don't know how this will end." If they really want to write an 'epic' love story, what they want to do instead of giving the girl the 'perfect' kind of guy, is to give her one who seems to be all wrong for her. Take a look at young adult fiction or women's romantic fiction and you will probably see that they're all about people falling in love with someone they shouldn't: So, rather than providing viewers with every reason not to ship Emma/Hook by the two apparently being 'wrong' for each other, all they are doing is fitting the traditional formula for an epic romance and by doing so, are actually doing the opposite.

I'm aware that people think Emma should be with Neal, and claim that Milah is Hook's true love, but I can't agree with that. I'm sorry people. I can understand completely why Hook would seek revenge on the man who killed the woman he loved in front of him and then cut off his hand. But his desire to avenge her death does not exist as proof that she was his true love, even if he did love her very much. I suspect that his determination to get revenge has less to do with the extent of his love, and much more to do with his rage and hatred at Rumple. Revenge, I think you'll find, has little to do with love, (least of all TRUE love), and everything to do with hate. So nope. Not buying that theory. The Huffington Post writes "It was hard to really believe (Milah) loved Hook for any reason other than that the script required it of her, and since she was a fairly unsympathetic character after abandoning her son, it was hard to feel anything when Rumple killed her." link
There are fans who ship Emma with Hook AND Neal, but I've seen others get into heated arguments when it comes to debating which man she should be with. Neal fans don't like Hook, and defend Neal to the last page, claiming that he was just doing what he thought was right because he loved her. Given what we know about Hook, I can't see him doing what Neal did, especially to someone he loved. Think of the scene in 2x09 when he comes face to face with Emma again: Emma's "You would have done the same thing!" and Hook's reply: "Actually, no." Hook may be a pirate but he also has a code. He helped her find the compass and risked his own safety in the process in 2x06, he saved Aurora's heart in 2x09, and he believes that a man should fight for what he wants. I want to be fair to Neal, and I know he had Emma's best interests at heart, but his actions were rather cowardly and emotionally scarred her for the rest of her life.

"I think that in all life, there are the people who are right for you and there are the people who are wrong for you, and then there are the people you just choose," Edward Kitsis said in an article for The Hollywood Reporter, bringing to mind the scene in 2x08 when Cora says to Hook "You chose her and the consequences of that," I think that 'Once Upon A Time' has clearly demonstrated that being a 'dark' or 'villainous' character is no barrier to love. Look at Rumbelle. Now, is Rumple honestly the best person for Belle? Probably not. But does it matter? Because in this show, it's not about what or who is right or wrong for you, it's about who your heart chooses. It's not enough to say "Hook is a bad guy, let him be a villain, he doesn't deserve to find love," when the writers gave Rumple a love interest and Regina loved Daniel. If Rumple can be loved by someone, then Hook certainly can. I know that it's not necessary, and there are people who would rather he didn't, to preserve his 'villainy bad boy' mystique, but let's face it: there are few things that get a fandom more excited than a good old 'opposites attract' romantic entanglement. Hook is a 'bad boy', Emma is a good(ish) girl; the producers would be nuts NOT to use that, when the relationships in any show, are easily one of its biggest talking points.

Perhaps the biggest clue the producers have given us regarding Captain Swan, is in the 'Timeless Love Stories' promo they recently released. "Love stories," the trailer reads, showing us clips of the various relationships on the show: Snow and Charming, Regina and Henry,Regina and Daniel, Henry and Emma, Red and Peter, Aurora and Philip, Rumple and Belle. "So powerful...They inspire. They defy. They transcend. Two worlds. They are timeless." Were Emma and Neal featured among them? No. Emma and Graham? No. It was Captain Swan. A sign that our ship has officially set sail? I really hope so. 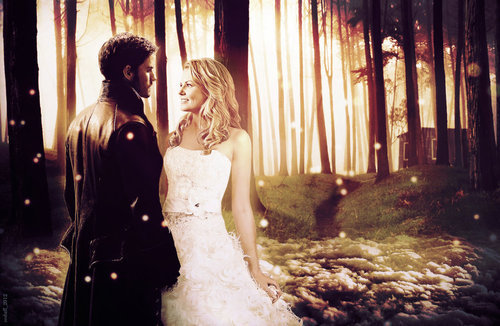 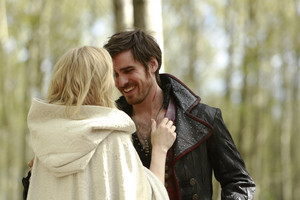 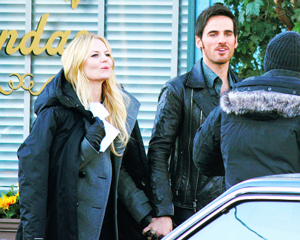 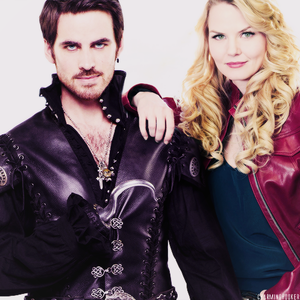 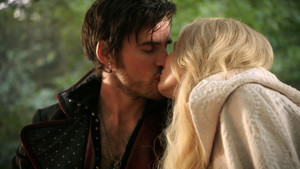 Killian and Emma
added by greyswan618 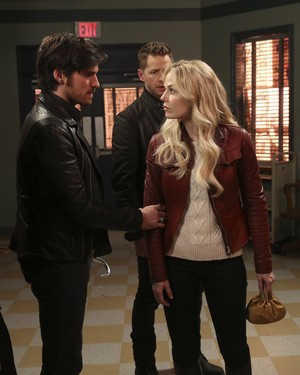 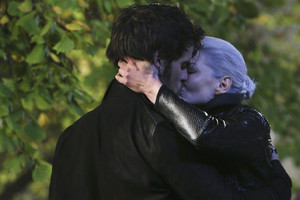 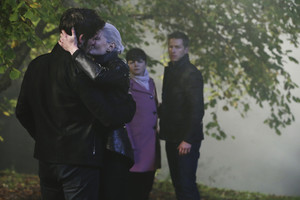 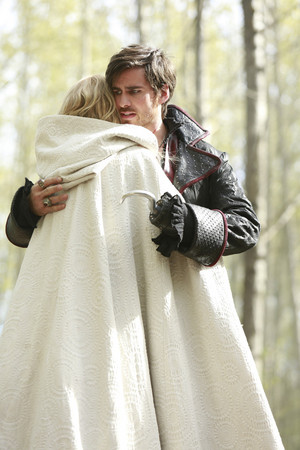 Captain Swan according to Tumblr
added by iceprincess7492
Source: tumblr 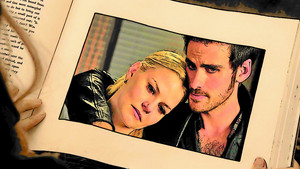 Once Upon A Storybook
added by iceprincess7492
Source: tumblr 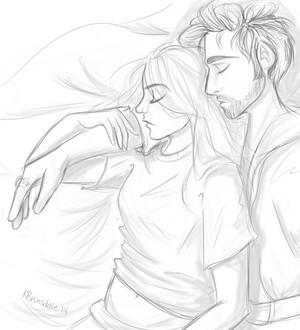 Killian and Emma
added by bouncybunny3 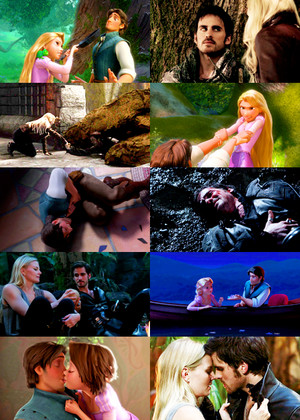