akiho
posted by judychen
Name
Akiho's given name 秋穂 means "Autumn blade of a plant" in Japanese. Her family name uses the Kanji characters 詩之本, 詩 means poem/poetry, while 之本 means "the origin of". So her surname could mean "the origin of poetry".

Appearance
Akiho has long light-blonde hair that's parted into two large curls. She has front bangs with a small part over the right eye. She also has a small ahoge sprouting from the top of her head.

She is a petite girl with blue eyes and fair-skin.

Personality
She is considered a shy girl, but after Sakura befriended her, she became more outgoing.

Like Sakura, she is shown to be very cheerful and friendly as well.

In addition, she can also be quite gullible, as she believed Takashi's lies, much to Chiharu's irritation.

Background
She was born into the oldest magician clan in Europe and is the only descendant who is born with no magical abilities. Due to this fact, Akiho was neglected by her parents and the clan.

Akiho suffered loneliness throughout her childhood, she then turned to books which were the only way to keep her company and cheer her up.

After her clan contacted with a magical british assosiation that confirmed that Akiho has no magic on herself like a "blank book", both parts come with the idea of that they can "write on her". This way, the clan and the assosiation uses a magic technique that turns Akiho in a living book in which they record the magic of countless magicians. This comes with the risk of turning Akiho in a magical tool and in turn make her lose her soul and will if she was not able to resist so much magic.

A magician from the assosiation designated to guard her, Yuna D.Kaito, was who, against the wishes of the assosiation, take Akiho from her clan and fled with her to Tomoeda.

Plot
Clear Card Arc
After Sakura's cards have been made blank, she continues to have dreams about the mysterious figure who appears to be behind it all; the only thing she can discern about them, is that they are the same height.

The next day, Akiho is introduced as a new student at Sakura's high school and the two automatically bond.

Akiho reveals that she has lived in multiple countries/regions (including Hong Kong and England - the same as Syaoran and Eriol, respectively) and has moved a lot due to her parents jobs; but is generally kept in the care of Yuna D. Kaito, of whom it is obvious she harbors romantic feelings for.

When the group is out viewing cherry blossoms in the spring, Akiho and Tomoyo perform a duet for everybody and at the encouragement of the group, Akiho decided to join Tomoyo in the school choir.

Akiho is very similar to Sakura, personality-wise, and their similar appearance was even noted by Sakura herself. The two mesh well together and Akiho went to Sakura to learn how to cook so that she could surprise Yuna with a meal she made especially for him.

It turns out that Akiho and Sakura "share" dreams - with Akiho (in the anime) as the figure in the robe (in which she herself does not know it is herself) and Sakura as herself, both parties not knowing who each other are. As Sakura and Akiho continue to enter the same dream, Akiho later develops a knowledge of why she is present in those dreams: the mysterious person she is watching has something she wants. The two's resonance grows stronger within the dreams as they continue to meet.

In Chapter 21 of the Clear Card Arc, Akiho remembers that the robe in her dreams is the formal robe of her clan, meaning that: she too is part of the "D" magician clan.

However, near the very end of Chapter 24 of Clear Card Arc, and unlike the anime's ending, the one under the hood is seemingly "revealed" to be none other than Syaoran himself - though the reason for this event had yet to be explained.

Some events would also occur differently between the manga and anime versions; including the anime's ending (involving Akiho's role) being different from the manga's similar point of the story.

Chapter 25 of the Clear Card Arc continued from around the point where the anime left off. More of her backstory is revealed; with a younger Akiho appearing, as she reflects on her childhood with the clan. Though she grew up from birth in a clan of magicians, known as the "Most Ancient Sorcerers in Europe" whose bloodline endowed all of it's members with magic, Akiho herself did not contain any magic, and the clan soon became disappointed with her. The clan is implied to have a rivalry with the Li family, as Syaoran is specifically brought up in comparison to Akiho:

Magician 1: The elder sisters of the Li Clan in Hong Kong don’t have magical talents, but I’ve heard that the youngest son possesses fantastic ability.

Magician 2: How is that?

Magician 3: What does it mean?

Magician 1: It seems the current Head of the Li Clan intends to have that youngest son as their successor.

Magician 5: To fall behind to the Li Clan is…

Magician 2: Our clan’s pride is on the line.

After the "dream" of her memories is over, Akiho wakes up, crying and having remembered her past. She comments, "... (I'm) lonely", "It (was) a dream; Of the past". She picks up Momo, and says, "Now I have Momo with me. And Kaito-san." After saying this, she then looked over to her book and smiled, continuing, "And… everyone I’ve met (since) coming here too". Momo, in turn, thinks, "That's right, Akiho. Don’t forget that there are people who will (stay) by your side now. And at “that time” too.. 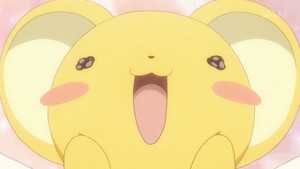 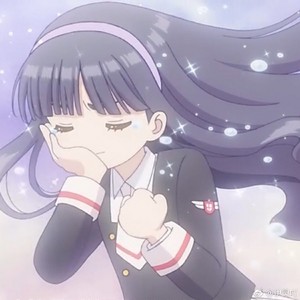 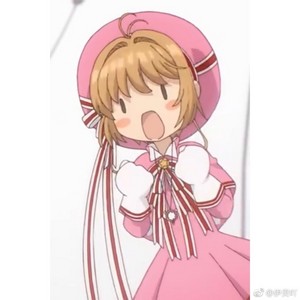 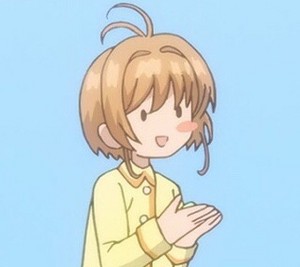 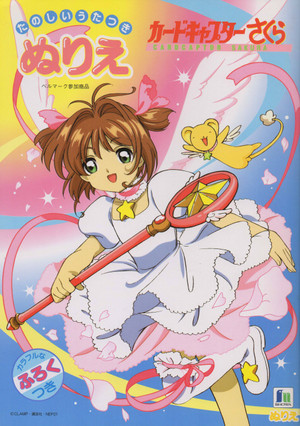 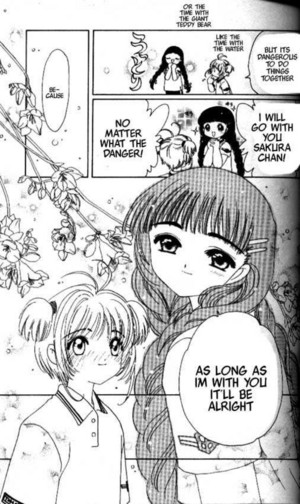 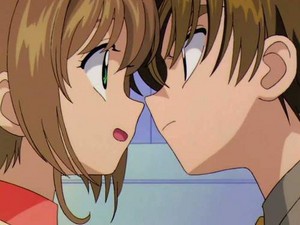 1
Syaoran and Sakura
added by Blacklillium 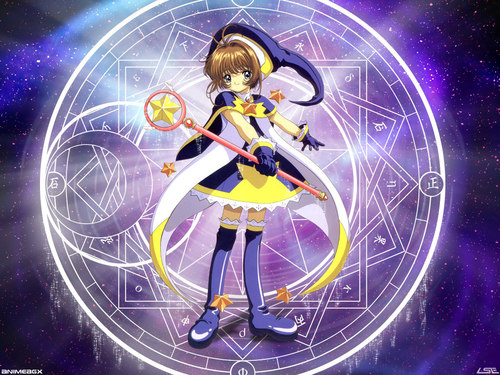 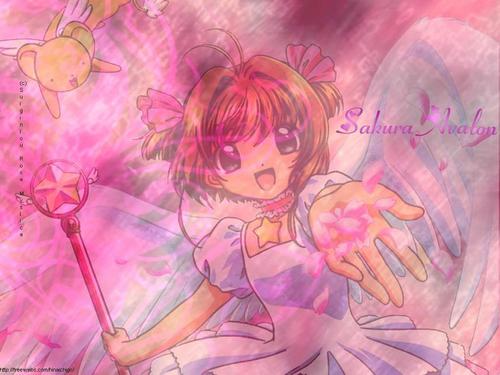 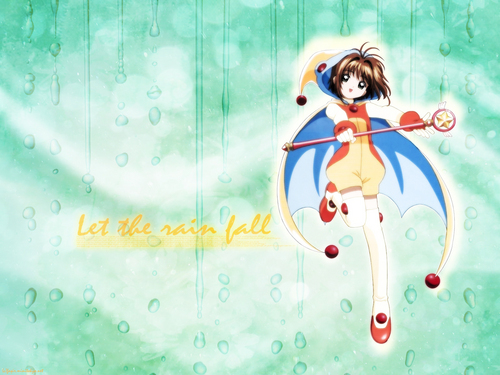 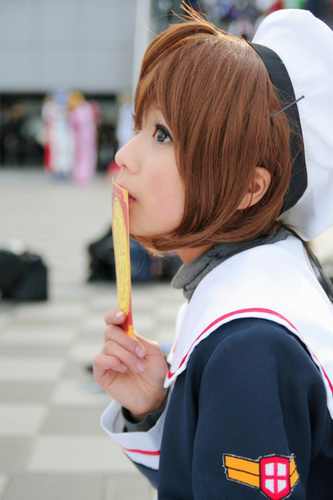 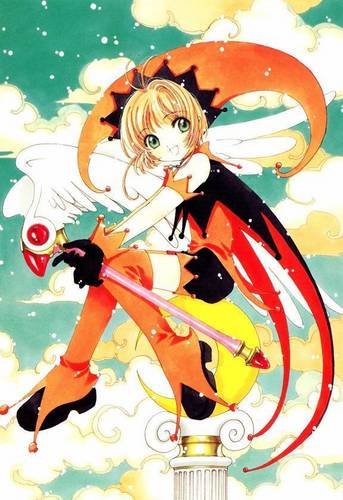 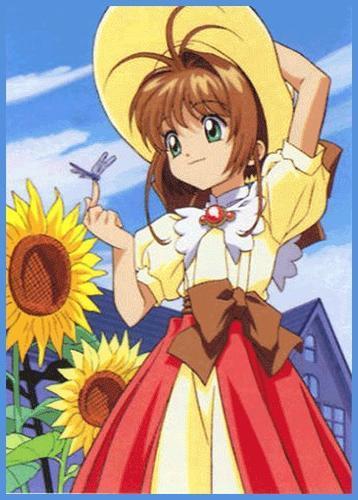