The Wizard of KND Chapter 7
posted by kndluva
The Emerald City was more packed than A Rainbow Monkey 50% off sale at the mall. And just as visually disurbing. People of all kinds in a manner of all clothes, similarity being only the varying shades of green, rushed past to unknown places. The mix-matched group tried to ask several people where to find the wizard, but them being children, and the questioned being adults, they were, of course, ignored. The Cowardly Lions eyes suddenly went wide, and with a yank, he pulled the Scare Crow back.
"HEY! WHAT THE CRUD ARE YOU.....oh." The Scare Crow spluttered, then died out.
Directly in the spot where he was standing now was a Gilded Carriage with a bright green horse.
"Oh! Sorry young...um,....thing, I almost ran you over there, didn't I? Quickly, all of you, jump up in here. I will take you to where you need to go as a apologetic gesture of peace." said the driver
"A what now?" the Scare Crow whispered to the Tin Girl.
"Free ride for almost splatter-icating you."
"Oh."
As all 4 children and weasel climbed aboard the carriage, though Kuki mumbled somthing about taking rides with strangers being a BAD idea.

~~~~~~~~~~~~~~~~~~~~~~~~~~~~~~~~~~~~~~~~~~~~~~~~~~~~~~~~~~~~~~~~~~~~~~~~~~~~~~~
The scream from across the entryway tore the childrens attention away from the drivers Horse of many colors, who had now gone from pink to aqua.
"IT'S THE WITCH!!!" screamed a nearby man.
For indeed, it was. The Wicked Witch of the East was flying through the air haphazardly, the back of her broom spewing a thick black smoke.
"Hey, she's trying to write a message with the smoke!" Kuki cried out.
"Either that or she has a bad transmission on that thing." the Cowardly Lion mumbled with a shrug.
After several more people screamed (you have to get that kind of thing out of your system) the message was written out:
Bring Dorothy and her ruby slippers to me and no one will get hurt!
"Who's Dorothy?"
The question was repeated in rushed whispers by numurous Elmerald City sevillians.
The group hopped out of the carriage and took several nonchalant looking steps back.
*WHACK!* The children simultainiously hit the backs of their heads on a rather large door. A huge sign hung over the top. The Scare Crow starred at it for a couple seconds.
"Do you think it will lead us to the Wizard?" he asked.
"I dunno, the large neon purple sign that says 'The Wizard' is kind of vauge isn't it?" The Tin Girl said with a faceplam.
"Do we have to go in?" nervously asked the Cowardly Lion.
Kuki nodded. "If there is any hope of me getting home."
"And me getting a brain." Joined in the Scare Crow
"And a heart for me!" said the Tin Girl with confidence.
The Cowardly Lion looked at the door, then back at his friends.
"And if you want courage......" Kuki started.
The Cowarldy Lion sighed. "Ok, I'll go in."
And it was him who knocked on the door.
~~~~~~~~~~~~~~~~~~~~~~~~~~~~~~~~~~~~~~~~~~~~~~~~~~~~~~~~~~~~~~~~~~~~~~~~~~~~~~~~~~
The Doorman answered once again through a small door withen the door, the only difference being he has nursing a black eye with an ice bag. He moaned when he saw it was the children.
"I....I....w-won't" he started to protest.
"Move aside." The Tin Girl growled while folding her arms.
"If.... oh, never mind." he sighed while opening the door.
The halway seemed to go on forever. They had to tackle the Cowardly Lion to the ground to keep him from getting cold feet and running away. Untill, finally, the entered the Wizards chamber. A gigantic firey head sprung up as soon as they walked in.
"WHO DARE DISTURBS ME IN MY CHAMBERS!??!!?!?!?!?!?!?!?!" the Head screamed.
"AHHHHHHHHHHHHHHHHHHHHHHHHHHHHH!!!!!!!!!!!!!!!!!!!!!!!!!!!!!!!!!" everyone screamed.
The Cowardly Lion bolted, and the others were close to it.
"W-we are hoping to have our wishes granted, uh... Wizard ma'am sir thing? " Kuki stuttered.
"YOU THINK I WILL GRANT YOUR WISHES WITHOUT A PRICE?!?!!??!" the head screamed again.
"Um, sort of?" the Tin Girl grimiced.
"I WILL GRANT YOU YOUR WISHES, BUT WITH A COST!"
"I'm almost afraid to ask...." sighed the Scare Crow.
"BRING ME.... The Wicked Witches Broom!"
kndluva *PHEW!* Finally, more of this story. Sorry it took so long, there was a dasturdly combonation of lazyness and writers block.
taismo723 AWESOME. It sounds just like the movie.
kndluva THANK YOU!!!!
DexandBloss awesome!
kndluva thanks!
operation N.O.W.A.Y.S(new operative wants a yell sweets)part 3 it gets even worse!
posted by suzyisbrute
Numbah5:This is bad...totally bad!

Cree:Maybe you should talk to her...me and Lela talked it out and now im dating Chad...

Numbah5:(screams)...oh Jessee what are you doing hanging on the ceiling?! 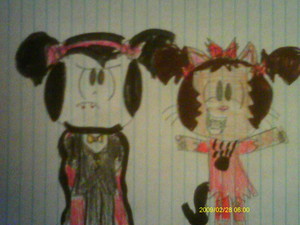 "YAY ASSIMILATION!"
Abby came to about an hour-and-a half later. She tried to yawn and stretch but couldn't. Her legs and hands were being held down by little braces.
Wally, Kuki, Megan and Val were screaming and gnashing their teeth. Maddy, Minerva, and Hoagie were shaking. A sinister voice filled the air.
"You see, you naughty little childrens, THIS is why you're NOT supposed to enter a lab without asking. Consider this your punishment!"
Abby sighed.
"Not again...Listen, Fangface! Numbuh 5 has HAD it with you constantly-"
She stopped when she laid eyes on the face that the voice belonged to. His face was purple...
continue reading...
2
Operation: F.R.I.G.H.T. (Freaky Ritual Is Gonna Happen Tonight) Ch. 3
posted by kndkid96
While Kacey was being given an offer she couldn't afford to refuse, all the other girls- well, MOST of the other girls- were fooling around with her stuff. Abby was listening to her iPod, and Kiki was asleep. Thankfully, they were smart enough to not bug her. Waking her up, as they learned early on, would be catastrophic.
"HIDE-AND-SEEK TIME!" Minerva called out. Val and Megan took off in a flash. As Minerva counted, Maddy and Kuki struggled to find a place to hide. She was nearing 20, so they dashed into Kacey's closet, and slammed the door shut. Minerva smiled. She knew exactly where the...
continue reading...
Operation: F.R.I.G.H.T. (Freaky Ritual Is Gonna Happen Tonight) Ch.1
posted by kndkid96
October. One of Kiki's favorite months. October meant Halloween and Halloween meant vampires, goblins, witches, ghosts, and things of that nature. Kiki by nature was sweet, mildly naive, and kind of girly, but she could never turn down a creepy monster movie....unlike Kuki, who shrieked at the mere mention of a spook.

She impatiently paced in the mission prep room, dressed in her purple cat nightgown.
"Guys, come ON!! The 'Month Of Monsters' show is TONIGHT! I wanna get to the theater before it gets crowded!"
Tonight, at the old theater downtown, they were showing a whole bunch of old monster...
continue reading...
2
Operation: V.I.P.E.R. Chapter 6 A Twist
posted by taismo723
The BB Gun's bullet made an awful noise. Especially when it entered Wally's head. Everyone gasped. Even Falken. Wally had a few seconds to reach up to his head before falling over. Falken couldn't believe he just shot someone. Falken tried to run. Christian and David grabbed him by the arms. Kacey had went into shock. She fell over too. Kuki was only a few feet away. She began to cry when she saw what her date had done. She ran to Wally's aid.
"You idiot!" Kuki yelled. "You didn't have to hurt him! What did he ever do to you?"
"He kicked me in the groin!" Falken shouted.
"Well, it's not gonna...
continue reading...
2
Operation: V.I.P.E.R. Chapter 5 The Dance Begins
posted by taismo723
The Dance was probably the best dance Sierra Verde had ever held. There was a sweet DJ. There was a disco ball. They even had a colorful dance floor built in the ground! Kacey, David, and Christian arrived. They each let out their own "Whoa." Nearby, they could see Falken getting some punch. Kuki was over on the dance floor waiting for him. She had a pretty pink dress on with ruffled sleeves and on the bottom was ruffled too. Falken returned with some punch. Kuki smiled. She took the punch and drank it. Over on the other side of the Gym, you could see Kiki and Megan talking. Kacey's eyes bulged....
continue reading...
1
Operation: L.I.E (L.ittle I.ndignafying E.mbelish)
posted by amy23000
Every one was in the cafeteria eating lunch, but today wasn't like any other day i mean... different-er than any other one. After the school bells ring for the last time for the day. Wally and Hoagie decided to mix up the day instead of going to the tree house but don't leave the school(how sucky ..yet not)and take screws out of teacher chairs and putting cinder blocks and making people trip face-first into 'stuff' on the ground. *RIIIING* "there goes the lunch bell RACE YA TO THE PLAY GROUND!" wally shouted to hoagie but kuki grabbed him by the hood while numbuh 2 was pushing people out of...
continue reading...

1
knd bumper
added by amy23000
numbuh 1's like you missed a spot then wally whines to numbuh 2 and say "how come he neva has to paint?"
video 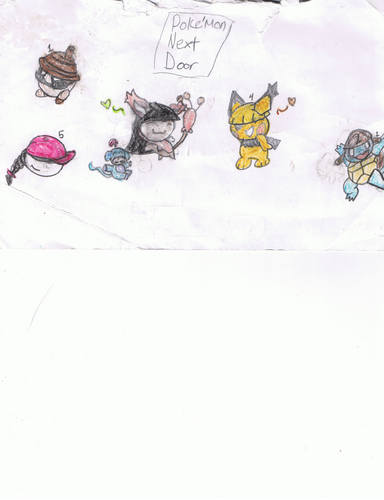 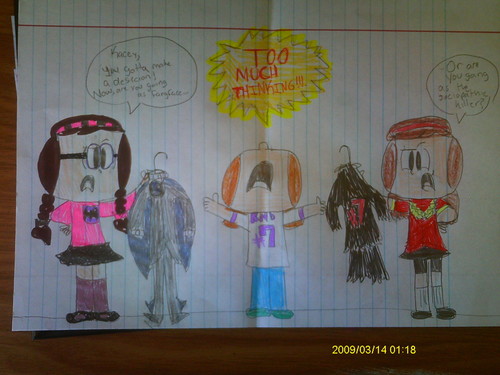 1
Too Much Thinking!
added by kndkid96
Source: Me! 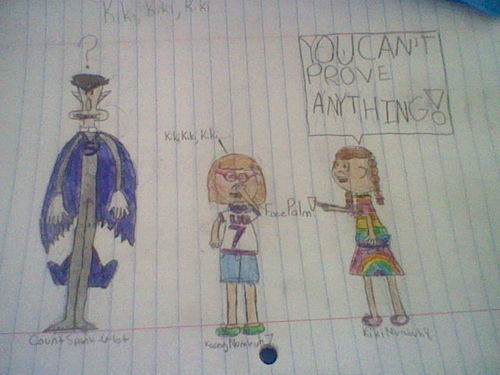 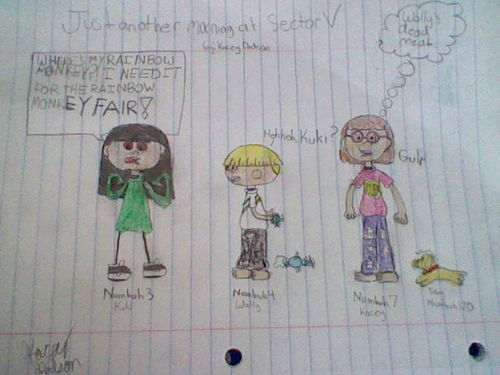 2
Just Another Morning at Sector V
added by taismo723 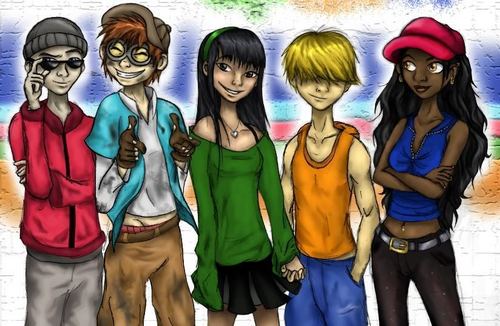 7
KND! :)
added by DexandBloss
Source: photobucket
1
Valentines Day Mystery with the KND Part 2
posted by kndluva
''Alright fellas bring it just a tad closer!'' Shouted numbuh 3 at a large crane hefting her luggage.
''What is in there?'' Wondered numbuh 8
''Her Rainbow Monkey collection.'' Moaned numbuh 7, slowly shaking her head.
''Impressive!'' Gushed numbuh 2001.
As sector V entered the main hall, a boy jumped out and yelled
''BOO!''
Only numbuh 3 and 2 screamed at the lame prank.
''Numbuh 20,000, come on!'' Numbuh 1000 shrieked , whacking him upside the head.
In a split second, a water balloon hit numbuh 20,000 smack center on his back.
''Nice shot numbuh 69!'' Congratulated numbuh 1000.
''Welcome to our...
continue reading...
2
trouble at the tree house part 1
posted by amy23000
it was a normal day at sector V's tree house every one slept in because they had a day off but every one got up at 12 o' clock because they were all starved every one had weird hair and all still in their pajamas but of course nobody cared because they were doing the same thing they all ate a brunch-ish type meal and they were all awake so they decided to stay up but they still didn't get out of their pajamas numbuh 3 yawned followed by numbuh 4 followed by numbuh 5 followed by numbuh 2 followed by numbuh 7 "jeez yawning like totally contagious" kacey said "so are we all just gonna go back...
continue reading...
2
Oporation Congrats chapter 7
posted by kndluva

One half-hour later, numbuh 14 was tied to a chair in the Delightful Children's mansion. Obviously, not everything had gone according to plan. She silently cursed herself. One of the first rules she had learned as a cadet was to always have a plan. And a back-up plan, and a back-up plan for the back-up plan. But, the thing was, numbuh 14 never even really had a plan in the first place. Suddenly, the Delightful Children walked into the room, numbuh Fifty by their side. , Why hello Annie, what a pleasant surprise!, numbuh 50 mockingly said, a sick smile on her face. , Hi, traitor!, numbuh 14...
continue reading...