Caught in the Web of the Bedlam
posted by katialautnerxx
The amputated fingers of the Other Mother's shattered hand squirmed beneath the rock at the bottom of the well. They rose, dragging themselves by the fingertips to rejoin and connect to what could be scavenged of the hand. The resurrected hand reared up, wiggling its fingers, testing the air around it, before pulling itself from beneath the rock.
'Come back to me...'
The hand ripped a hole in the fabric containing the rock. It reached its slender, needle like fingers up to the thread on which the key to the door of the Other World was looped around and pulled gently.
'Bring it back...'
The hand snipped the thread and curled its fingers around the top of the dark key. Slowly and nimbly, it began to scale the wall of the well.
'Yes... Come back to me...'

Far away, in the darkness of the lounge in Coraline's home, the door began to bulge and move. A shrill scream emitted from the green mist circling the frame and its tendrils snaked out into the room. They swirled upwards, reaching for the portrait of a young, dark haired girl in a yellow raincoat with a black cat, and stroked her smiling face. The paint crumbled and fell away, distorting Coraline's smile.
'Ah, Coraline...' the mist sang. 'Such a beautiful girl, you know I love you...'

From outside the cat watched the green smoke curling around the painting of Coraline. His fur bristled and he growled.
The mist made the eyes of the girl swirl into dark, circular shapes and unnerved, the cat sprinted away. The mist laughed cruelly and disappeared as the door was thrown open and bright light poured into the room.

Coraline gasped and fled the room.

The girl in the picture smiled back in a demented way, her dark eyes glinting.

The moon's rays made the dark circles glow. The buttons shone and two dark hands materialized on the shoulders of the girl.
abbygrace Uhhh... that was... creepy (laughs nervously).
2
Coraline or other coraline or...
posted by coraline711
Now Coraline Jones, the real one, is still very amazing. But what if it was the other Coraline that was that we all know and love. I wonder, what would be different, or what would stay the same? If it was different would you think it would be more scary? Or much better? You would know how the other mother ate all her childeren. I think that would be cool to see, not in a mean way. Anyways, what if the other mother didn't eat the childeren. Maybe it would be fun to have that other life that Coraline could of have.
So, I hope you liked my little article, and i hope it got yoyu thinking!

Coraline Jones. :)
1
Neil Gaiman's "Coraline" now available as iPhone app
posted by maporch
Coraline is now available as an iPhone application on the Apple iTunes store. Thanks to ScrollMotion's Iceberg Reader technology, Coraline fans can now download the book directly to their iPhone and read while on-the-go!

You can purchase the book and read user reviews here: link

The Iceberg Reader revolutionizes the reading experience by combining the familiarity and timelessness of books with the convenience of New Media. Iceberg makes it easier than ever to browse, buy and enjoy the written word. 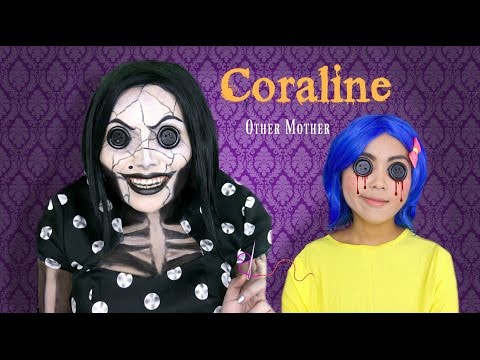 1
Teddy Bear - Coraline AMV
added by shenelopefan
video
coraline
movie
animation
4
Come back.... Coraline....
posted by katialautnerxx
Heart racing, Coraline took another step forwards. She had to act calm despite the torrent of horror washing down on her. The button eyed army advanced on her and she screamed...
Panting, Coraline woke up.
'Just a stupid dream!' She complained silently. It was midnight, trees freaked and moaned in the wind and Coraline was sure she heard them whispering. 'Just my imagination run wild, again." she reminded herself.
Slowly, careful not to make any noise as she tip-toed across her bedroom, Coraline slipped from her safe point and closer to the tunnel to the other world.
'Coraline... Come back...'
That was it. Something was definitely whispering. Not the trees, but the door. Ghost chants echoed eerily into the bedroom as Coraline pressed her head to the door. Something cracked. She gazed down in horror. Before her lay a doll. That doll.