31
14 Ways to Annoy Obessive Twilight Haters (there are some)
posted by sapherequeen
*I'm sorry if I offended anyone on this spot, I just did this to be funny, not mean..same with my Twilight fangirl article*

1) If you know a girl who despises Twilight and is crazy about hating it, send them a box with a poster of Edward with the words "My Dream Guy" on the poster
2) Tell a Twilight hater that Ron Weasley is Emmett's b***h
3) Tell them that REAL men sparkle
4) When a group of Twilight haters are surrounding you, stand in the middle of the group and shout out "I'M A CULLEN, EVERYONE!" then sing "I am a vampire" by Antsy Pantsy
link
5) Write a letter to President Obama convincing him to make a law against disrespecting Twilight...and anyone who disses Twilight will get a life sentence.
6) Ask them if they love Edward, when they say no ask them if they love Jacob, and when they say no to that ask them if they love Edward again....
7) If you know a Twilight hater that drives a volvo and you see them driving up the street, get a group of crazy obsessive fangirls to run after the volvo and shout "EDWARD! EDWARD!" over and over....
8) *This one may seem a little weird*
Get a male Twilight hater to fall for you and tell him you'll wear something that will turn him on and leave the room....then come back dressed up as Bella Swan or Jasper Hale
9) Tell a hater that he/she has bad taste in books
10) Give a Twilight hater the Twilight movie for his/her birthday
11) If you're surrounded by Twilight fanatics and a Twilight hater is standing in the middle of the group with you, annoy him so much about Twilight that he/she shouts "I HATE F**KING TWILIGHT" out loud so the fanatics will hear him/her..
12) If a Twilight hater accidentally posts something on the Twilight spot, get all of your friends to rate the item so the hater can get a Fanatic in the Twilight spot
13) Send Stephenie Meyer a letter saying she's invited to a beach party and to wear one of these two outfits:
link
and give her the address of a Twilight hater's house...
14) Convince Emma Watson to trash Harry Potter then try out for the role of a Twilight vampire..


*Again, if you think they're dumb, please be respectful when saying so*
sparkleviolet, wishey and 30 others like this
END_OF_DOCUMENT_TOKEN_TO_BE_REPLACED
loading additional comments...
MadamOcta13 Hey, I love this article! Even though I'm an anti, I think this is hilarious! Some of these things WOULD annoy me, though...
hermione980 omfg!! lmao!!
Fmaisawesome Lol, I hate Twilight, but this is funny if any Twilight lover dose any of this stuff to me, the joke's on them .. hehe.
scarxtardis 7 is my fave xD EDWARD, EDWARD!!
lemony44 OK, I dont really like Twilight, but I hate how everyone goes on assuming that if you are Twilight hater your a Potter lover. ( i am a total PotterHead, BTW.) that's just weird.
jefferyw52 ok im a twihater and this just makes me nervous no one should ever do those things to anyone it would kill me if that happened to me "shivers"
twihard865 twilight is epic as u can tell by my username
HecateA 7 is crazy funny 11 is dangerous
clcstar15 youtube link dont work
Team_Carlisle rofl!!! hilarious
TwiChara OMG FUCK TWILIGHT... Ahh... That felt good... =D ... Except for Jacob... XD lol I don't even despise it that much, it just felt good! XD
helen22 i wat to became a vampire!!!
june13 hehe thats funny i just might use some of your ideas if you don't mind
Friendly_Girl Lol, that's hillarious xD
TheQuibbler Wow... those are really pathetic. I would only be mildly annoyed by some.
MusicMaker95 I wouldn't be annoyed at all. I'd know what I already suspected, that Twilight lovers are childish. Why bother trying to change the world by hating people and trying to hack them off? Any Twilight lover or hater that thinks they can is wrong. It's just a friggin movie.
emisa123 I'm a Twi-Hater, but this was hilarious!! I havn't really seen much Twi-People posting humor-stuff on here....
peetarocks999 No! We already lost Ced! Not Hermioneeeee!!!!!!!!
RavenclawRocks First of all I do NOT agree with that. Number eight is just plain cruel, I mean what about that poor Twilight Hater? Are you just going to pretend you love him/her then do....that? Well that's what I'd expect from a Twilight fan. And Ron isn't a whatever you said And Emma would stick by us unlike SOME people with the name RP And this doesn't annoy me. It just shows me how (get ready for a LONG list) cruel weird stupid shallow annoying mean aggornant disrespectful know-it-nothings Smeyer-suckers you Twilight fans are! To be honest I am quite worried about your brain, my advice would be: Go and see a doctor And P.S if you ever see Smeyer tell her from me: YOU SUCK!
luv_warriorcatz @ravenclawrocks: shes actually a sane fann u know.......
sapherequeen RavenclawRocks: This is a joke. You ever heard of one? And FYI, "Smeyer-suckers" isn't offending. It's just hilarious and a great way to see how immature people like you are. And thank you luv_warriorcatz :)
snape_lover_107 are u crazy i am an obbsesive twilight hater for a reason because the books and movies suck and there is nothing u twi hards can do about that lol
scarxtardis My best friend used to absolutely despise twilight, so I bought her a mug with "I heart Edward Cullen" on one side and "real men sparkle" on the other. She threw it away. Then she watched Twilight with my other twilight loving friend, and she hated it. I made her watch new moon with me, she thought it was ok. I dragged her off to eclipse, and she loved it. Now she's waiting eagerly for breaking dawn. XD
sapherequeen snape_lover_107: *SIGH* Did you even bother to read my comment [i]that is posted right before yours[/i] and the top of my article? -_- And for God's sake, "Twihard", "smeyer-suckers", any foolish name like that is not offensive. At least, for the majority of the fans who have practical sense.
dolceclavier It is an okay list but to clarify... Edward Cullen is PETER PETTIGREW'S BITCH. Now that's saying something. 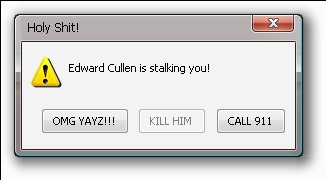 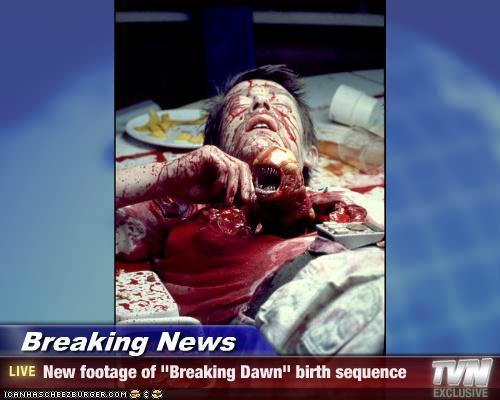 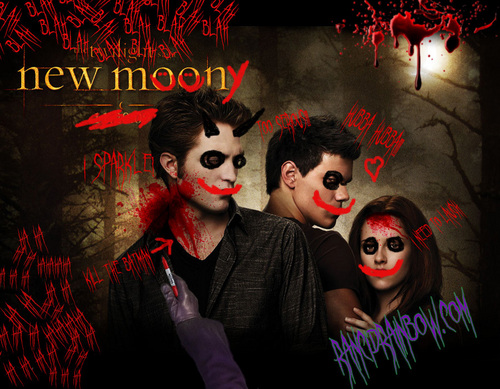 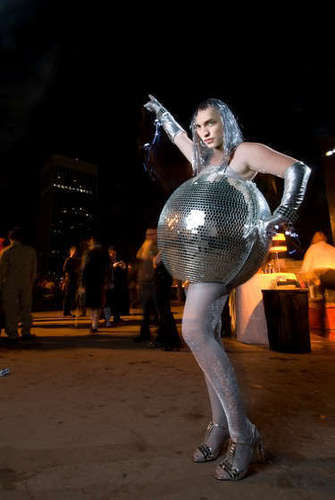 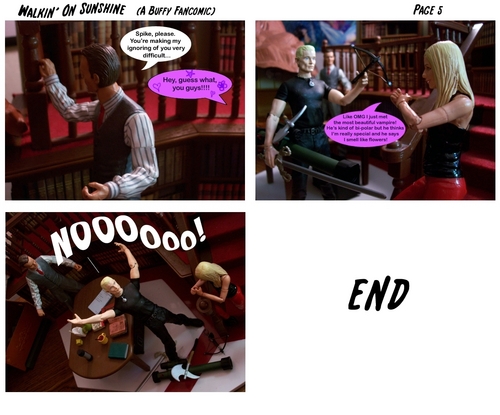 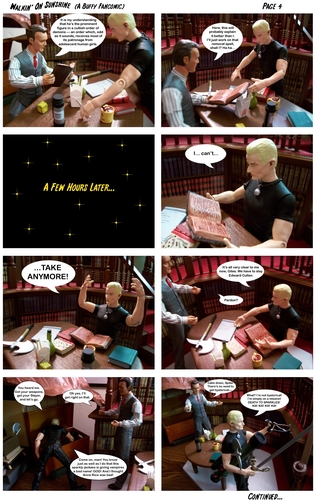 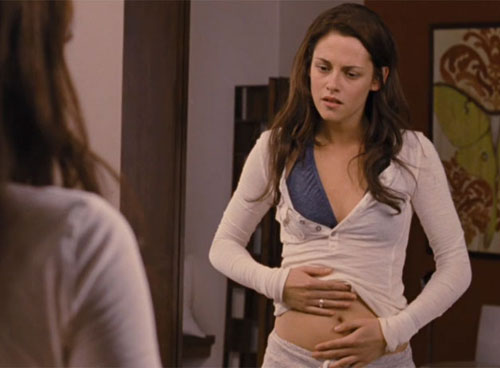 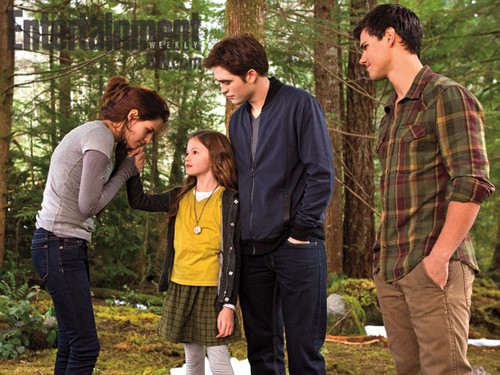 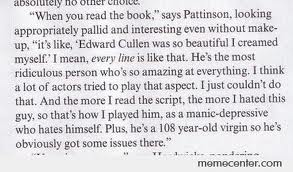 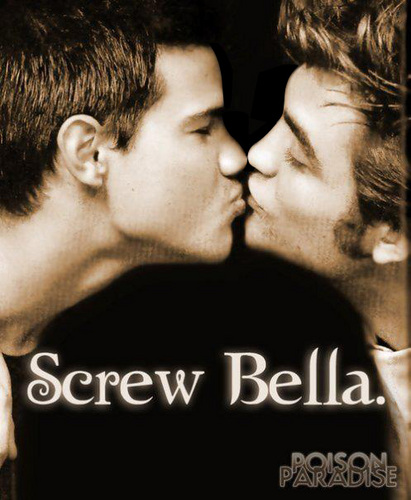 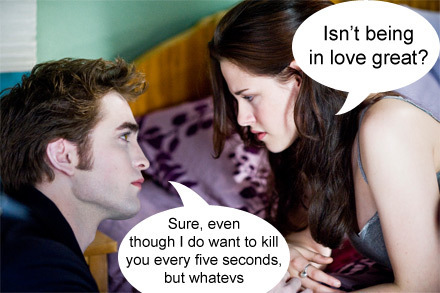 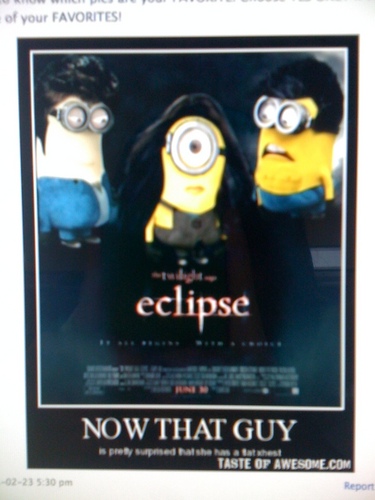 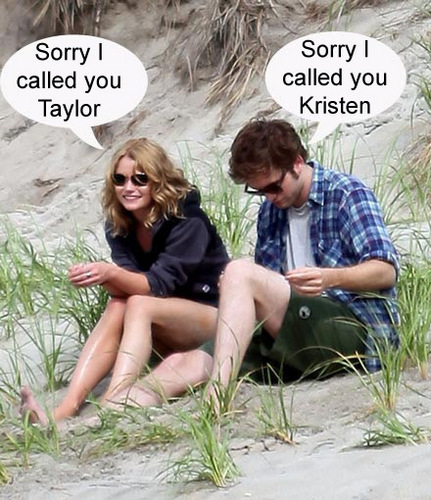 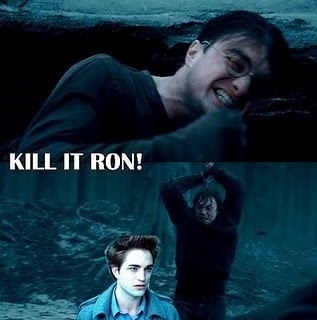 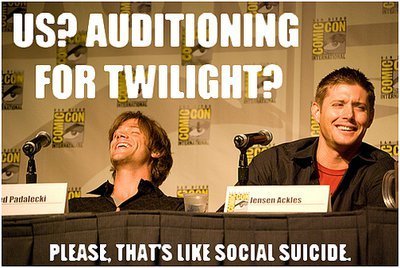 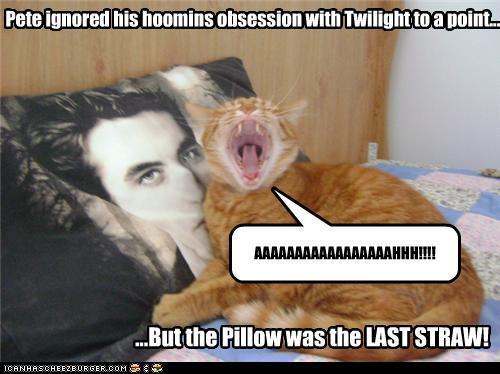 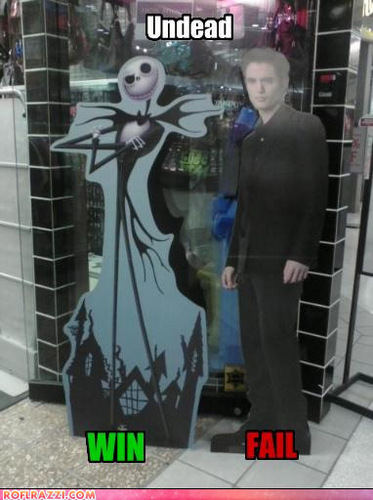 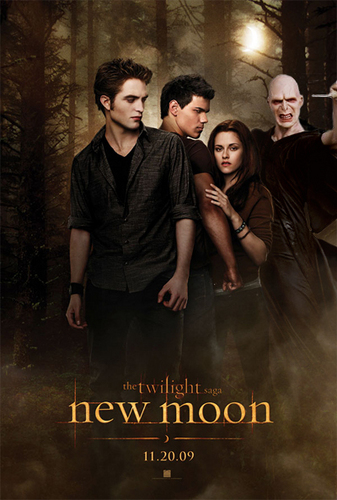