MUST READ FANFICTION -- DE--(UPDATED)
posted by yasmeen40
Before anything, shameless self promotion part just because I can:
Twitter: NoBodyOwnsYou_ and my very own Damon and Elena fanfic, Going downhill from here – Summary: College student Elena Gilbert, meets Damon Salvatore in a rather unfamiliar situation. Sparks fly higher than usual but she knows it can't end well from day one. AH/AU (M Rating)
My name on FF.Net is DElenaLover4Ever

If & Only If by Florenci7 – Summary: Post-5x22. Damon and Bonnie are dead and everyone is struggling with the loss. But not everyone is ready to let go. Damon/Elena, Jeremy/Bonnie, Stefan/Caroline, Damon/Bonnie friendship, lots of other friendships and guest appearances from The Originals.
All this time by AnglcDmn1986 – Summary: While cleaning up after a mess Matt and Jeremy made, Elena discovers secret compartment under the couch. Thanks to a Gilbert device, she's now back in the 1860's-Wait, what? D/E and S/K. Post S4/E9. Time travel fic, but I felt the need to add my own twist. Co-Written with Taaroko.
Christmas Charade by notenoughpotter – Summary: Written as part of the Damon/Elena Holiday Exchange Elena Gilbert comes home for the annual Mystic Falls' Children's Hospital fundraiser. Sparks fly when she discovers she's not the only celebrity home for the event. After being separated for two years, the pair is forced to work together…and pretend to get along. Is it easier said than done or will it lead to something more?

Chasing Fire by Don't Tear Me Down – Summary: "Elena. She has a spirit and a fire in her" . After her transition, Elena lost all reasons to live. She couldn't feel, hate or love. Until an insane idea pops up which causes her to swap places with her doppelganger, travel to California and try to chase her fire that she thinks she'll find in Damon.

(M Rating) Read at your own risk, loads of naughtiness ahead. You have been warned!...

The Song That Calls Me Home by Foreverfirstloves
Sixteen years ago, Damon left Elena to chase his music. Now he's back in Mystic Falls, and she's terrified. Damon is thrilled to see his former love...until he finds out about the guy in her life. A fifteen year old, with blue eyes and black hair. He decides he wants to be there for his son, for Elena...but she wants him to choose: Family or Fame. Will he be able to let go?


Order Up by goldnox
AU/AH/ Damon Salvatore's life is going nowhere fast, unless he's racing to his next stop as a pizza delivery driver. But when the cute brunette he delivers to every Friday night applies for a job as a CSR, reality is quick to take hold. Can Damon justify following his heart towards a girl that is off limits? And if he does, where exactly is it going to take him in the end? / Delena


Remember My Love by This Is My Escape
She refuses to believe he's gone. Post-finale canon.

Tell Me What You Want by delena25
Have you been wondering what Damon and Elena got up to the summer before Elena went to college? They may be finally dating, but that doesn't mean their relationship is any less intense! Damon pushes Elena's boundaries by encouraging her to share her sexual fantasies with him…and Damon loves giving Elena what she wants. Set pre-season 5, compliant with season 4.


Four Lettered Lie by This Is My Escape
Damon Salvatore thought he'd never have to see Elena Gilbert again. He was wrong. AU. AH.

Through The Looking Glass by tamilnadu09
"It'll be just like The Parent Trap," Katherine Pierce confidently told a skeptical Elena Gilbert. "Except we'll do it better." And the plan might have worked too, if it wasn't for the infamous Damon Salvatore...AU/AH.


Alas We Aspire by Beautiful1Disaster
Damon is killed in the future, and Elena is sent back in time to save him. When she finds herself in a past where Damon does not love her, and she has to fight for him and against an unexpected opponent to try and beat fate, she realizes she may have gotten more than she bargained for.

What Words Can't Say by Trogdor19
Sometimes words only lead us astray. Damon and Elena seek their own truth in this steamy continuation of the final scene from 5x16 "While You Were Sleeping." One-shot. Lemon.


The Shattered Mirror by ElvishGrrl
Elena Gilbert is an intelligent young woman who seems to have it all: good friends, loving parents, caring husband, great new job in her field. Damon Salvatore has his hands full taking care of his clients, his family and his brother with no appreciation from anyone. Neither of them want any complications in their lives, but sometimes life has other ideas. AU/AH

A Woman's Worth by Cher Sue
AH/AU–Love hurts. This story takes on a literal meaning when Elena is a victim of abuse by her boyfriend. A journey of the silent sufferings of a girl with no one to turn to and unwilling to ask for help. Enters Damon, a social worker determined to rescue a damsel in distress and falling for her along the way. What is he willing to sacrifice in the end to save a girl he loves?

By Any Other Name by goldnox
ONE-SHOT / AU / Desire is a complicated drug. Control is intoxicating. Submission, exhilarating. Pain can be beautiful, as equally freeing as choosing to temporarily alter your identity. All things Damon knows and enjoys as he spends one night with a partner that is willing to play along. Or is he the one that's actually following the rules? / LEMONS, See explicit warning inside.


Yours, Always by This Is My Escape
With Damon serving in the war, and with no real guarantee that he'll return, he makes sure Elena knows how much she means to him through the letters he writes to her . 1940s piece.

In-Flight by Layla Reyne
Damon and Elena take a time-out from all the tension on the flight home from Denver. One-shot; post 3X19.

Maybe Less, Maybe a Little More by ceruleanvixen
Vampire Damon and Human Elena meet in a snowstorm. He wants to kill her and she is instantly attracted to him. What will happen over the next ten years? Fic for the A2A x-mas exchange. Non-canon, Oneshot, Delena endgame, rated M for sexual content and some gore. ENJOY THE DRAMA MYLOVES! :D

Changing Attractions by amygerrard
Elena Gilbert, 23, is a 'how to' journalist at a top fashion magazine. But what will happen when she has to write an article on how to change a womaniser into a one-woman man? Even more importantly, what will she do when the man she has to change is Damon Salvatore, 27, the renowned and successful businessman? One thing's for sure, sparks will fly. AU/AH


Fate, or Something Like It by This Is My Escape
Elena Gilbert decides that enough is enough and is tired of waiting for "the one" to give her a family. After taking it upon herself, she gets artificially inseminated. What happens when she meets who she thinks is "Mr. Right" soon after? Rated M for coarse language and adult scenes. AU. AH.

Anyone Else But You by Wilb
Elena has worked for Damon for five years, they complete each other in ways no one else can. But will either of them be brave enough to fight for the love they deserve? AH/AU


Dancing in the Dark by chellethebelle
Singer, Elena Gilbert gets signed to the most prestigious record label in the world. She thinks it's her big break until she meets her producer, the cold and stoic Damon Salvatore.


All At Once by newsgirl83
Damon and Elena have been in an extremely casual arrangement for a month when he assumes temporary custody of his teenage nephew. Follow them on a journey as 'nothing' may just turn into 'everything' if they can overcome dark pasts & biggest fears.

Bumps by ElvishGrrl
Spoilers for post 3.22. Damon's about had it up to here with the town of Mystic Falls & everyone in it. He just needs to deal with the suddenly all-too-aware Founder's Council and then he's outta here. Oh and let's not forget the new Vampire Hunter in town. Extracting himself isn't going to be as easy as he'd like to think. And she keeps making it more difficult. Coarse language.


Your Kiss is Like Fire by Temptress-Kitten17
Damon deals with the myriad of emotions that plague him: desire, frustration, jealousy, anger, bitterness, guilt, love, and his struggle to remain in control of his demon; especially when Elena continuously tests the limits of that control.


Now you may think I'm a perv for having so many M rated stuff in my favorites, but when you combind boredom with some music and that search bar on FF.Net, lots can happen.
Plus, I'm stalking those writers –and more- on Twitter so it's hard not to read anything they write because their writing is just that good. Though you might be tempted to change your mind about that if you saw what they tweet and how they tweet it ;))

Special shout out part: huge thanx and many kisses and hugs for the amazing Cher Sue, for being there when you need the weirdest encourgmant words to keep writing *grins* I LOVE YOU GIRL! She probably won't even see this post but whatever.. 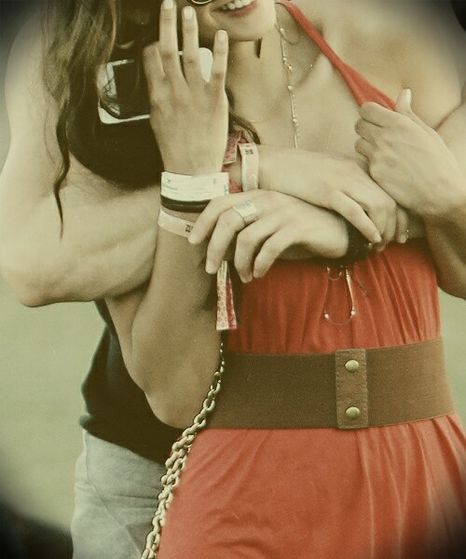 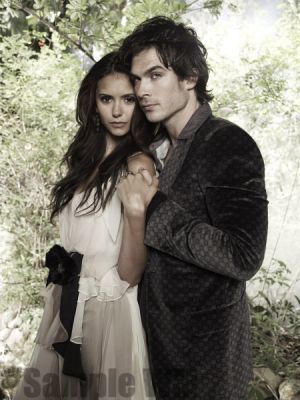 The word epic has been a point of contention in the TVD fandom. Kevin Williamson, Julie Plec, and Stelena fans claim that Stefan and Elena’s relationship is epic and Delena fans argue that Stefan and Elena are anything but epic and Damon and Elena’s relationship is in fact the epic love story of the show. I figured before we continue the argument that the word epic should be defined. However, “epic” is one of those words that everyone believes they know the meaning of but when asked to define it they come up blank (kind of like the word “irony”). Still, I think it’s important...
continue reading...
The Darkest Side Of Me ch.1
posted by yasmeen40
The Darkest Side of Me
originally Written by : SuchALittleMonster
on FanFiction.net
Something was definitely wrong. Everything was dark. Pitch black...

I slowly rolled onto my side and reached for my phone. Nothing. I always keep my phone on the nightstand next to my bed. Odd...

Sighing in frustration, I slowly sat up, groggy and irritated my eyes had not adjusted to my dark room yet.

I flung my legs over the side of the bed and blinked a couple times, rubbing the sleep out of my eyes. How long have I been out? Oh, goody a pounding headache to add to the list, just want I need.

I managed to crawl...
continue reading... 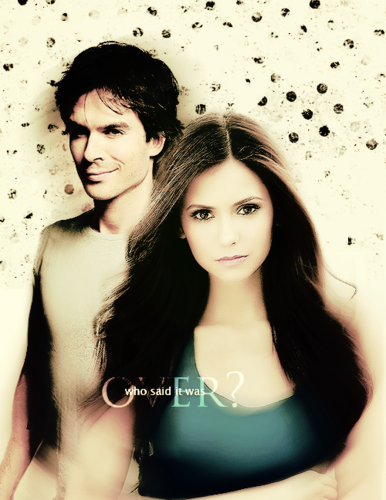 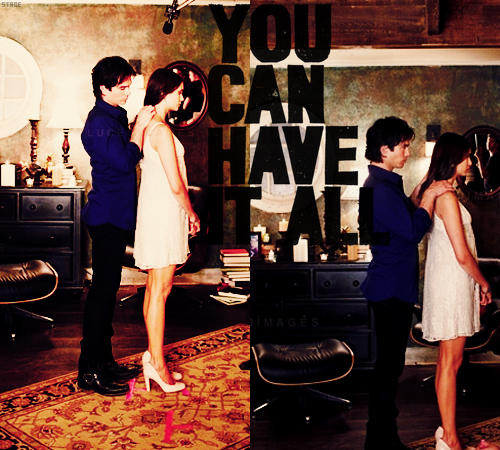 8
look at this!!!
added by jensen_ian06
Source: tumblr.com 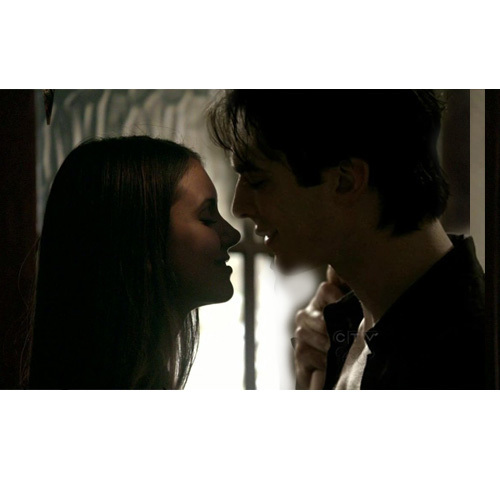 1
Delena
added by DelenaDestiny
Taking a look at what I read ...
posted by panther-jewel
I often read that a former Stelena fan becomes a Delena fan, and I never heard of a change the other way around.
Elena says that she feels safe with Stefan, but Damon makes the decisions that keep her safe, and Elena herself starts being the "bad one" to protect the ones she loves – and becomes more like Damon with it, who is willing to let her hate him as long as she is safe. Elena says that she is happy with Stefan, but Stefan always deals with his guilt and self-hate, while Damon makes Elena laugh or they laugh together and have much fun. Elena says that Stefan makes her happy to be alive,...
continue reading...
More Cards
1234567891011