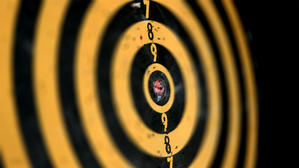 January 26th, 2013
Our target was Kiyomi Takada, Kira's spokesperson. Everything was set. I had t wait for Mello to arrive with Takada in the truck which we'll use to transport the woman. I had to wait for a bit, but Mello arrived in time.
I got in the back of the truck as he came in with the motorcycle and I closed the doors behind us. Takada got off the bike and, by the way she stood in the corner of the truck, she had a very good idea who we were. Mello removed his helmet and it was obvious that the fears of her petty life came to reality.
"Take off everything you're wearing and put it in that box," Mello said.
Takada looked at the box as if it were a cat's decaying corpse.
"Hurry up," Mello told her, raising his gun and pointing it at her. "You can use this blanket," he continued, showing her the said blanket.
"So please, keep wasting our time," I said, smirking and taking my own two guns and pointing them at Takada with a flip of my hands. "Give me a reason to shoot, I'm begging you."
Sadly, she didn't. She just did as Mello told her.
Takada was in her underwear when she said: "Before I take off the rest, could I please have the blanket so I can wrap it around me?"
I was almost tempted to tell Mello to just ot give the woman that blanket. I was curious what she would do then, but we had to move, so I kept quiet.
"Whatever you want," said Mello and threw the blanket at Takada.
"Honestly, Mello, you don't have to be so polite," I said, but kept watching Takada closely.
That was when I noticed her stop removing her bra, yet still moving her right hand. The bitch... She stood so as her right hand was not visible. After she finished removing everything, I decided I could not take the risk of not checking.
"Let's go," Mello told me.
"No," I replied, still pointing my guns at the bloody bitch. "Wait for me in the front, I have to talk to lady Takada for a bit."
Mello gave me a confused look.
"Ah, c'mon, I won't damage her, unless it's completely necessary," I said, trying to sound like a person who would actually keep that promise.
I thought I saw a shadow of a smile on his face before leaving. He, indeed, did not smile anymore, and it was a shame.
After he closed the doors behind himself, I gave Takada a smile which reflected all the malice I managed to gather in me because of these hard times. It was a smile which, I'm not proud to say, was very similar to the one Jose had before trying to kill Soichiro Yagami: monstrous and demonic.
"Now, lady Takada, it's only the two of us. I believe you have no reason not to show me your hands."
She looked horrified. I think she was about to cry, the bloody bitch.
"Ah, thank you, lady Takada. This way, you're going to give me a reason to shoot you soon enough. Now, let me repeat myself, because this whole situation must be an overwhelming premier for you. Show. Me. The hands," I insisted, approaching her slowly.
She did not move. I walked closer and kicked the box which contained Takada's clothes in the other side of the truck.
As I got closer to her, she suddenly charged at me and shoved me. I fell backwards and hit the back of my head of Mello's motorcycle. Actually, I hit several parts of it and landed painfully on my back next to the bike. I think I managed to cut myself into something, but no matter how the situation was, I felt an excruciating pain in the back of my head. Takada started wearily approaching me. She probably wanted to make sure that I was dead or take my guns and kill me and Mello, but, with all my strength I pointed the gun which was closer to her -the left- and shot three times. She fell almost immediately to the ground. I tried to grinned as my left hand, the one with the gun, also dropped and fell on the cold, metallic floor of the truck. I heard the truck's front door slam. I tried to get up, then I heard the door to the back of the truck open.
"Shit," he swore under his breath.
I kept trying to get up, but I felt myself very heavy. I tried to speak, but I couldn't find my breath.
"Stop moving!" shouted Mello. "Just stay there!"
Instead of a response, I just obeyed. I heard the back door close and the front one slam again. Then, the truck started moving. He was probably speeding. Ah, how I love the speed...
Takada wasn't moving. Most likely, she was dead. I tried to touch the back of my head, but my hand made only half of the way. As it fell back on the truck's floor, I felt something wet and slightly warm and at last noticed the smell of blood.
The image grew blurrier, but I blamed my phobia of blood for that.
The truck stopped. I heard the doors slam and open again and then Mello picked me up.
"I k-killed T-Tak-k-kada," I stammered, grinning as much as my strength could allow. That would've been her fate, anyway.
Mello didn't seem to have heard me. I saw light somewhere to my right. We were now in a building. He shouted something, but I couldn't understand it.
I was now very tired. When I was finally placed on some flat surface, I allowed myself to sleep.
5
L x Misa ~ Chapter 4
posted by nevenkastar 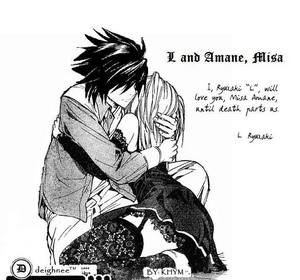 Dear Diary,
Monday, in the next morning, I was still sleeping, but not in the bed. I was sleeping on the couch, but why? I know that I was sleeping with L in his room. I really didnt know what happend. When I got up I saw a letter on the table next to the couch. The letter was from L, I was shoked, It says:

"Hey, I know you ask yourself why are you on the couch and not in my bed, well I know I should tell your yesterday, but I knew that you will get mad so I tell you know. I want you to keep our relationship a secret, I love you, but I think that would be bad for everyone to know. Im sorry!" 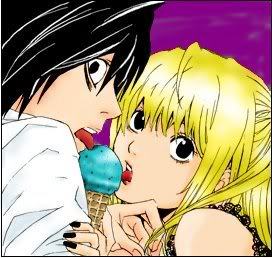 Dear Diary,
After the thing with the tongue, it turned out that it was almost 01 pm and we should go eat lunch. This time I was still sleeping, so L puted me into the bed and he called a pizza servise and ordered a pizza, and bought some cake and sweets (like usual). After the pizza and the sweets came, he set up the table. Then he waked me up (That day I sleep really much).

"Wake up, sleepy head !!"
"Awww what??"
"Come on, I got a suprise ."
"Really? What is it ?"I asked.
"Come hear." He smiled. "And what do you thing ?"
"Its os cool like a date" I said.
"Yeah, thats what I wanted to look like"
"Your...
continue reading...
3
Misa Goes to Cross Academy.
posted by UchihaYuki
Okay, This is my Death Note story, Its gonna be a chapter thing, I've written the next chapter and I'll put it up soon.
I hope everyone likes it.
comment it and tell me what you think.

“Liiiiiiiight!” Misa moaned “I don’t wanna go to Cross Academy... I hear the people there are weirdos...” she said unhappily. “Yes I know you don’t wanna go Misa, but it’s only gonna be until I’m finished with this case, and I bet you’d love it there, I herd there’s a lot of cute looking guys in the night and day class.” Light said as he paced in front of misa. Misa fell back into...
continue reading... 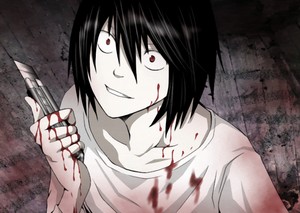 3
Beyond Birthday
added by IllusionDolls 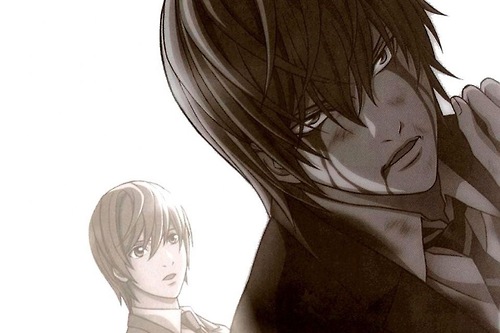 2
Light, Before and After
added by NightFrog
Source: tumblr 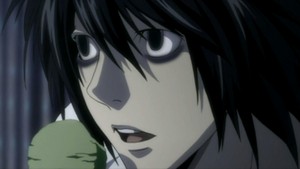 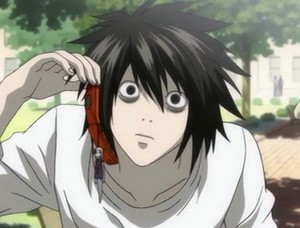 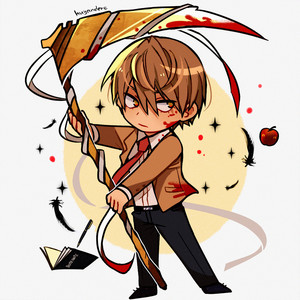 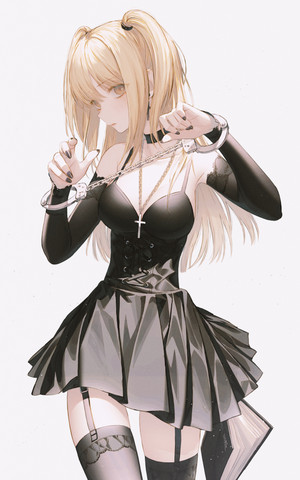 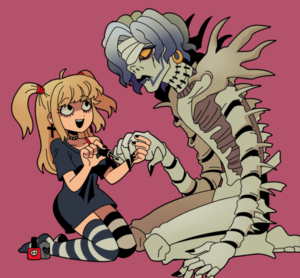 misa and rem
added by blue-roze 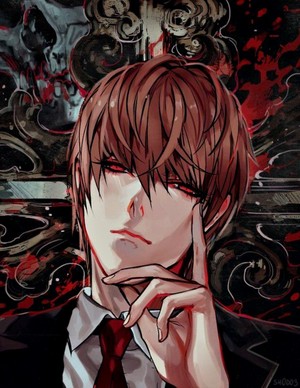 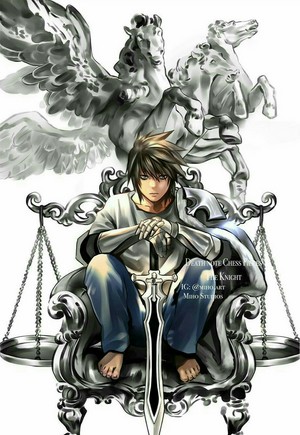 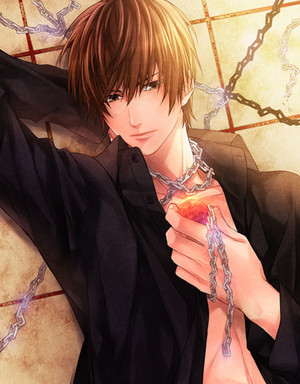 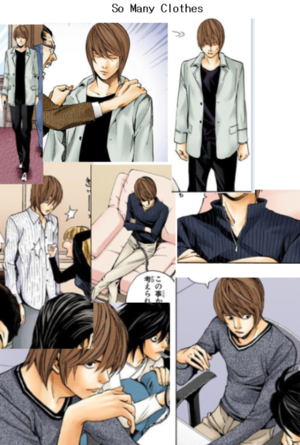 l vs light
added by blue-roze 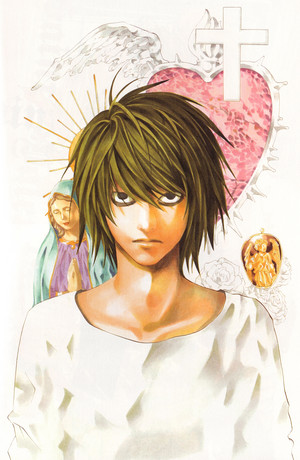 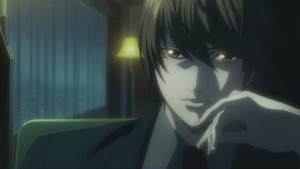