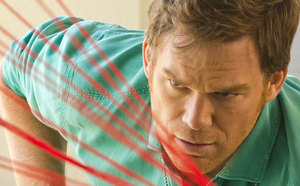 
I hope you don't have Time Warner Cable and missed Sunday's episode due to the carrier's contract dispute with Showtime and are reading this recap to find out what happened ... oh my god! Best episode ever!

Batista finally looked in those boxes of evidence in his living room and is starting to suspect Deb may have killed La Guerta; their scenes are full of tension and cat-and-mouse gamesmanship. And as Batista closes in on Deb, it's starting to become clear that Dexter might have to choose between keeping his sister alive and keeping himself out of prison, which puts Dr. Vogel's whole theory on whether Dex really loves his sister to the test. While Jamie realized she could do a lot better than Quinn and dumped his ass, and instead makes an uncomfortable pass at boss-daddy Dex himself. Oh, and Jake Elway hanged himself because he decided his character is too dull to survive.

Okay, so that's not really what happened Sunday. It was a somewhat sleepy episode (at least, until the very end when Hannah McKay did a pop-in), despite having my favorite Dexter director (John Dahl) at the helm. I was told by an insider that this season will get moving faster soon, and that the home stretch is great. The series finale script floating around Showtime is full of redacted text, with scenes shot in a secret location where the crew was ordered to strip themselves of Dexter logos to not tip off the public. Exciting!

In last week's recap I made a reference to a rumor making the rounds among insiders that Dexter might get a spin-off (in addition to venting about this season in general). A few days later, Showtime entertainment president David Nevins made headlines by teasing that Dexter might indeed get a spin-off, since showrunner Scott Buck has been signed to a new two-year deal.

The move isn't surprising since Dexter is Showtime's biggest hit and the network owns the show (instead of licensing it from a studio). Writing Dexter's final season in order to set-up a spin-off might seem like a creatively impure way to shape the show's final round. But think of it this way: Imagine you own a hit TV show AND a popular cable network. You pay yourself millions each year to air your own show -- would you want that to just stop? Would you be like, "Well, creatively, I think the ending of season eight might be a tad stronger if it had a greater sense of finality to it." Of course not! You'd be like: "It's just a TV show! I want another boat!"

The original months-old rumor that I heard was that the spin-off idea was initially focused on Deb. Showtime will, of course, not say anything about the creative focus of The Spin-Off That Does Not Officially Exist -- at least, not until the finale airs, since doing so would very likely give us a spoiler about what happens this season. Jennifer Carpenter has said she wants Debra to die this year, and that she wants to do a comedy series after this (see our interview here). That could be true, could be subterfuge, or could be a negotiation tactic (or a bit of each).

At this point there's a few spin-off possibilities. I'm betting Michael C. Hall, based on what he's said publicly about wanting to move on, won't have an on-camera role. Deb seems to be the most likely star. You could also wonder about Hannah McKay, too. Then there's Dex's Mini-Me, Zach Hamilton, who's getting some screen time tonight, but I suspect his role will be fleeting. And Dr. Vogel? Too creepy.

So I guess that wraps it up for... oh wait -- there's still a recap to write. Here's 9 things we did find out:

1. Masuka gets shot down -- by his own daughter. Masuka got paranoid that college-age hottie and sperm-donation-offspring Nicki must angling for his paycheck since she's in debt and never offers to pick up the tab. "I don't mean to sound creepy or anything, but I think I like you," he tells her. Aw, Masuka, it's not creepy to say you like a woman. But then he follows that up with a check for $5,000 and says he's been spying on her. That's creepy. She gets understandably offended: "I thought it was worth it to get to know you. Maybe I was wrong," she says and leaves.

2. Jake Elway ALSO has a weird brother-sister relationship: We know Dex and Deb are about as twisted as siblings get this side of Westeros, plus Jamie and Batista are a tad odd too (she's living with her brother and has been having secret sex with his ex-partner under his own roof). Now we find out Elway is obsessed with proving his sister's boyfriend cheats on her. He has Deb dress up and she acts all interested in the guy at a bar and he tries to take her up to his room. Elway freaks out and punches him, then blackmails the guy into dumping his sister. Okay. Except I'm not sure jumping at the chance to have sex with Jennifer Carpenter really makes you a horrendous boyfriend. I'm pretty sure Cheaters would have a 95 percent success rate using her as bait.

3. Dexter's son commits a crime and covers it up: Adorable Harrison broke the TV remote, then disposed of the remote's body under his bed. Dexter is upset by this. "Should I be worried he's lying?" Dex frets. Deb articulated my feelings exactly with her response: "He's 4, doofus." Harrison also went and retrieved his blood-splattered stuffed animal that Dexter tried to get rid of.

4. Batista makes a good decision: I liked that Deputy Chief Matthews didn't let Lt. Batista off the hook, refused to play the bad guy and ordered Batista to make his own choice for the sergeant promotion. Batista picked Miller over his buddy Quinn, who was understandably annoyed that his friend prodded him into gunning for the promotion -- every reason to not pick Quinn was based on Quinn's history that Batista already knew from the outset. Later Quinn tries to stalk Zach, but is lured away from his stakeout easily enough by Dexter manipulating Jamie to invite him over to her place -- so Quinn couldn't have wanted to prove himself all that badly.

5. Vogel wants a Dexter spin-off. What's that, you say? "Isn't there yet another twist to the Brain Surgeon storyline?" Oh readers, that whole Brain Surgeon thing is so Episodes 1-5 this season. Dexter has moved on, why can't you? Vogel now has a new purpose -- playing doctor to preppy murderous Zach. She's intent on creating a Dexter spin-off, as it were. While Dex wants to kill the kid. He's being a bit hypocritical here -- only Dex is allowed to funnel his dark passenger into a noble purpose?

8. Zach and Hannah McKay have something in common. Dex has what looks like a naked teenage boy wrapped in plastic on his table. Dex realizes Zach has a similar longing to kill and might make a great intern. So, like he did with Hannah last season, he lets another potential victim escape his table. Unlike with Hannah, he doesn't have sex with his victim after cutting him out of the plastic. At least, I'm assuming he didn't.

9. And speaking of which...: How's this for a hairpin plot turn: Deb and Dex are chatting about their day, they suddenly get drowsy -- they've been drugged! -- and in walks Hannah McKay!

And that's it. See? Nothing to cancel Time Warner Cable over. How will Deb and Dex get out of being poisoned by Hannah? I know what happens. And I'm not telling. But I'm going to have plenty to say about it next week.

Finale prediction: I swear I know absolutely nothing about what happens in the show's finale. But at this point, I'm going to lock in my guess. Nothing too shocking: Dexter sacrifices himself to save Debra -- his most human act yet causes his demise, proving Vogel wrong. Deb gets the hell out of Miami to some other city that could serve as the setting for a new show. Also: Harrison might die.
lauraxoxo likes this 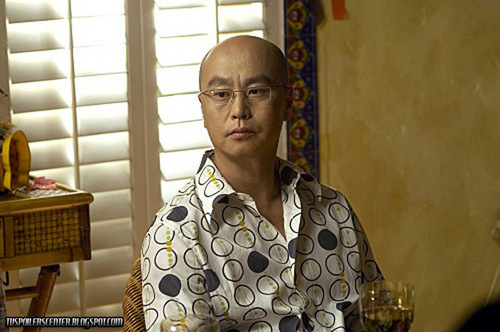 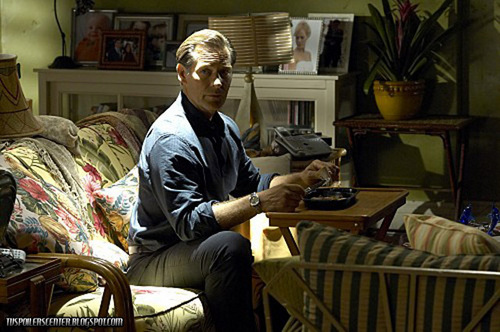 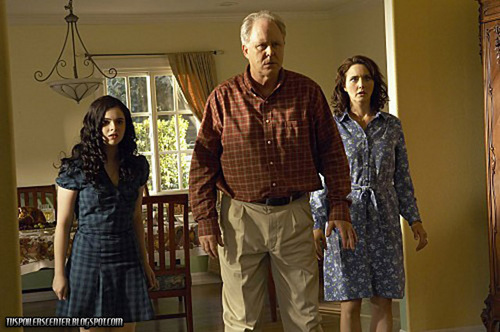 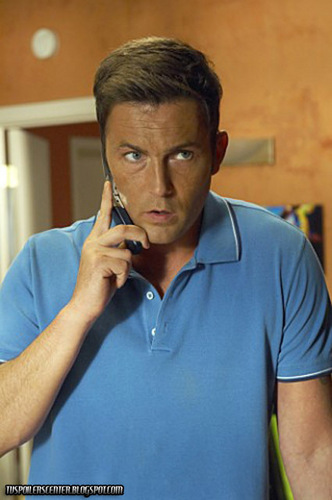 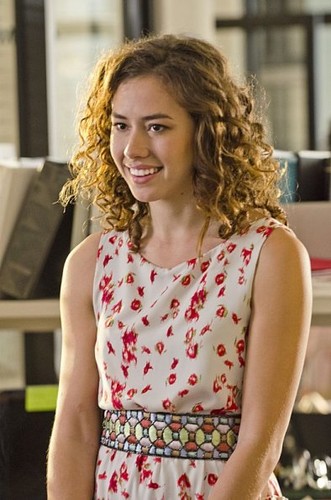 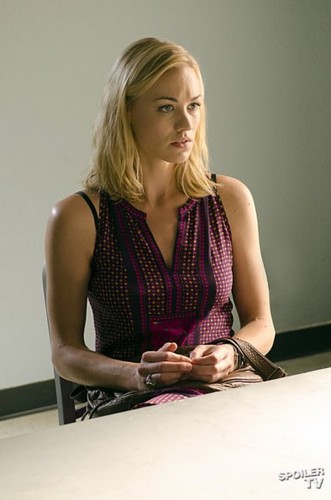 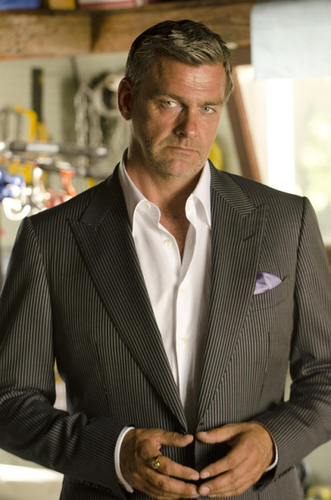 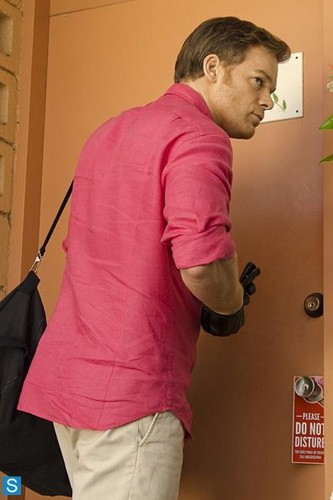 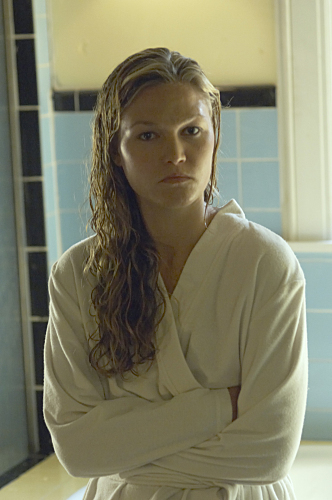 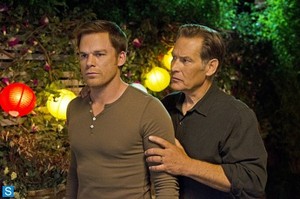 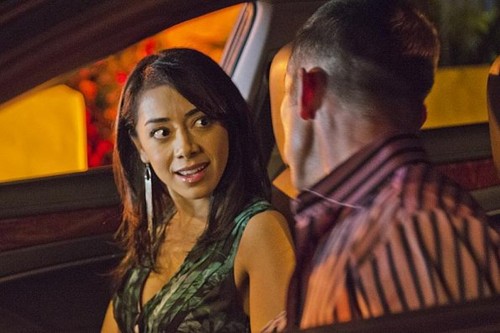 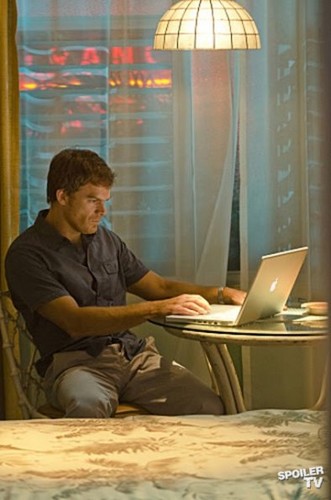 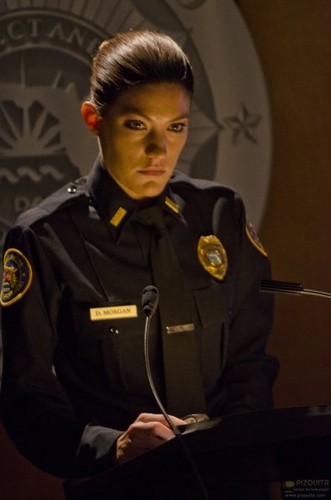 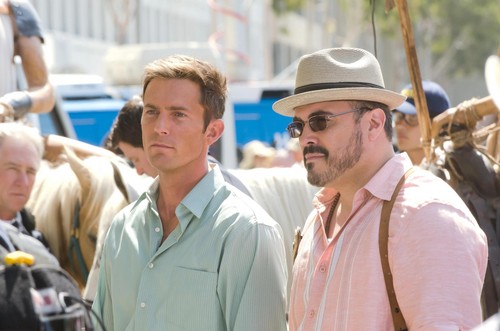 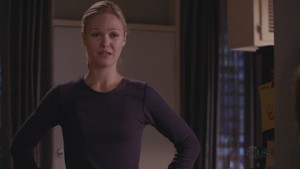