1
The Secret of the Sea - Chapter 5
posted by LightningRed
"My name is Ariel," said Ariel. "Ever since I remembered, I've always been alone. I don't know whether my parents are still alive. When I was a little mermaid, my mistress Eris took me in. She also took many other mermaids into her service. They aren't orphans. Their parents are proud to have their daughters serving Eris. But I don't know why, I never trusted Eris. And I never feel at ease with any of the mermaids. They jeered at me and mocked me because I have different interests. So mostly I spend my time alone in the Misty Falls."

"Now you've got me, because I'm alone too," said Thomas. "I know I've done you a great wrong, but if I can atone for it, I'd do anything for you. Not that I expect you to trust me, after what I've done."

Ariel looked into his face. He was very remorseful and miserable -- but still so handsome. Ariel felt her heart beating fast within her. She didn't know why, but it hurt her to see him in pain.

They gazed at each other, a feeling of understanding growing inside them. Ariel's heart beat so fast that she breathed deeply and closed her eyes again. Thomas felt the same way. He rose and held on to a tree nearby.

When he returned, he thought Ariel was sleeping. So he walked around and watched the blue ocean. He wondered how the water was calm and beautiful, yet deadly. He turned and looked at Ariel once again. He was surprised by himself. He barely knew her but he felt he could not stay away from her. He sat by her and sighed, but it was a joyful sigh.

"The sea has taken what is very dear to me -- but it also gives me the most precious acquaintance I've made," he thought. "What any more secrets would it reveal?"

The next few days were the most beautiful days in both Thomas and Ariel's life. She began to enjoy her life as a human. At first, she could not walk all by herself, because she had never been on land before. She learned to walk with Thomas, and when she stumbled, how he caught her! Once he accidentally pressed her into his chest, and she was secretly pleased. Thomas, who was very polite, apologized for the closeness, but she of course forgave him readily. Ariel also learned that she would be a mermaid when she was in the seawater, but would turn into a human when she was on land. 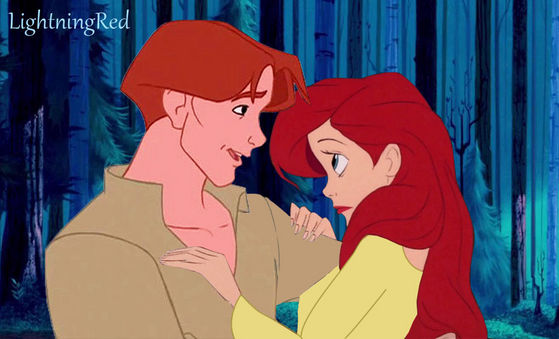 How he caught her!

Ariel stared at him. His words gave her new ideas. Yes, she thought. I would survive in both worlds. But she turned playfully to him.

"I like the sea better," she teased. "You said when I got well you'd return me to your home. Now I'm well. Take me back to the Misty Falls."

"But I thought... well, you said... you had no friend in the sea," stammered Thomas, surprised she was going so soon.

Ariel laughed. It was a beautiful laugh. There was pleasure and pain for Thomas in hearing it. Pleasure, since she could laugh at his side. Pain, since she was leaving him.

"Don't look so sad," she said. "I would still meet you, Thomas. Do you think I will leave forever the only friend I have?"

Thomas was overjoyed. His face beamed. "Yeah, I was silly, but I thought you'd vanish as in a beautiful dream. Come, I will take you to the Misty Falls."

The Misty Falls was not far off from the shore where Thomas took care of Ariel. Soon, they were there. But Thomas was reluctant to leave. Ariel, too, did not want to part from him so quickly.

"Could you stay for a while? There is a place I want to show you," she said.

"Could I? You know I could, and I would," smiled Thomas, holding out his hand.

Hesitantly, Ariel grabbed his palm. It felt warm. He smiled at her, and she smiled back. She led him into the entrance of her Mermaid Cove. They could see the lagoon from behind the waterfalls. Ariel sat and dipped her feet into the water. She changed back into a mermaid, but she did not care. Thomas sat beside her.

"It is beautiful here," said Thomas.

"It is my secret cove. Not exactly secret, actually, but nobody ever comes here. Every time I feel troubled, I come here to calm myself," she told him.

Once again Ariel's heart beat so fast she could hardly breathe. She felt his breath in her ear. He went on, telling her how he hoped to stay with her forever.

"With you, I am whole again -- I'm not alone and broken. Ariel, would you promise to stay with me forever?"

Thomas swept her into his arms and pressed his lips into hers. She relented, letting herself be kissed. Their eyes closed. It was a magical moment. They both wished if only it could last forever! But they knew it could not. 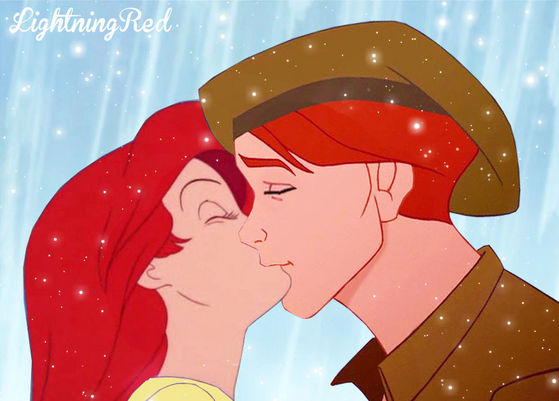 They share their first kiss
elaine2018 likes this
kristenfan10109 Aww so cute!! its so romantic please write more Red oh here's just an idea for you what if Eris partnered up with Hades
3
Beauty: Part 4
posted by kristenfan10109 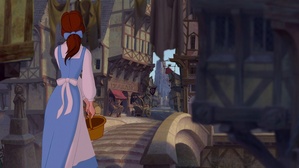 "We'll I hope you enjoyed our little visit with the hunchback never mind his hideous misshapen form I hope you weren't frightened", "We'll at first I was" Belle admitted "But he's very kind, gentle, and sweet it doesn't matter to me what someone looks like on the outside its more important what's on the inside", "Yes but I'm afraid the world doesn't share the same opinion as you like I told Quasimodo the world is cruel and wicked and its my duty to God to get rid of all its wickedness but no matter why don't you run along see the sights of the city I have some things...
continue reading...
1
My Princess Part 10
posted by PrincessBelle2 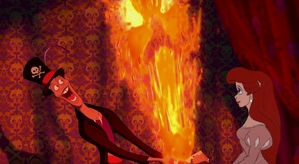 “Yeah, this is the one. Stand back when you open it.”
Ariel lay awake that night, wondering what to do. She wanted to help Jasmine so badly, but how? How? If only she knew someone who knew something about magic.

Then it hit her. She sat up, pondering for a few seconds and then, excitedly, she nudged her husband. Ramses stirred. “What is it?” Opening his eyes properly, he sat up, worried. “Is something wrong? Is it the baby?”

“Oh, thank Ra!” Ramses sighed. “You had me worried there for a moment.”

“Sorry. Oh, don’t go back to sleep,” she added as he lay back down again. “I’ve had...
continue reading...
2
Disney High Part 14:
posted by PrincessBelle2 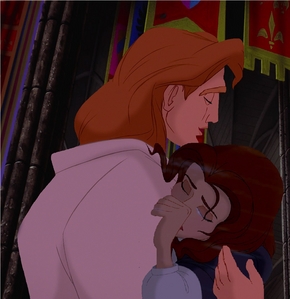 “Oh, Adam...it’s all my fault...”
Belle felt alone. She felt, not scared, but anxious. Now what? Her friends had deserted her. She couldn’t hold back the tears any longer. Then, she heard voices around the corner.

“Well, I don’t know; I just don’t think he’s being very fair with the grades.”

“He does tend to crack down hard with them.”

“I heard rumours he’s going to give us a test next week.”

Belle’s heart leapt. That was Adam.

“A test?” groaned Aladdin. “Oh, give us a break already!”

Belle darted around the corner and flung herself at Adam. Adam took a step backwards as she caught him; she almost...
continue reading...
-1
Arabian Nights Chatper 2
posted by bugbyte98 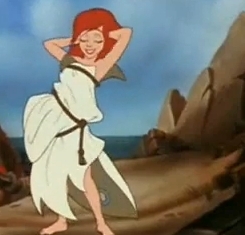 Ariel coming out of the water in rags.
This is now Ariel's turn

Ariel swam as fast as she could towards her underwater palace. When she arrived she was out of breath and panting. She quickly arched her back and slowly made her way inside. She swam into her bedroom, where all 6 of her older sisters were at their own personal vanities, humming a lovely tune with a blank look in her eye.

"What's going on in her head?" One of her sisters, Aquata, asked. "I don't know, but I hope she doesn't keep humming, or she will drive me insane!" Adrina said as she sat in her sea shell bed. "Sounds like she's in love!" Arista and Attina said as Arista...
continue reading...
Sea to Sparkling Sand: Chapter 3
posted by StarWarsFan7 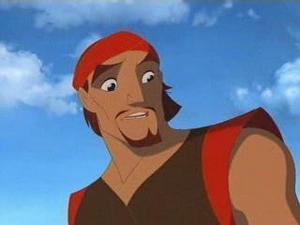 Sinbad
Sinbad has looked everywhere to find someone to fix the ship that he cares for. But no one could assist him. It was time to bring out the big question to the king of Agrabah. This means, Sinbad will have to make a quick stop to the Agrabah palace.

{A/N} Okay, so in this chapter I decided to make Gaston {Beauty and the Beast} Jasmine's father. Crazy right? I just wanted to change the character of Princess Jasmine's father because I'm not a big fan of the sultan. Instead of Sultan of Agrabah, I'm going to make it King of Agrabah. Since, you know, Jasmine's a princess! 'Gaston' as the king will...
continue reading...
3
Disney Anthropomorphic Animals
posted by GypsyMarionette
FEMALES 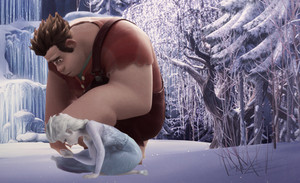 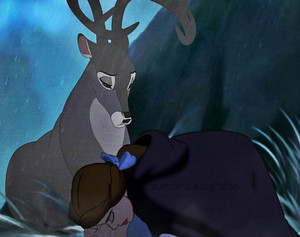 3
To know sorrow
added by auroraxaurelia
Source: Disney, me 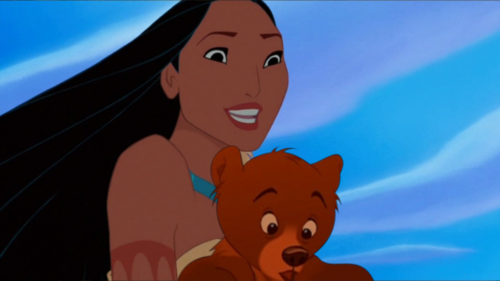 5
Koda and Pocahontas
added by RoxStar09
How to make your own crossovers (Paint.net) [NOW WITH EXAMPLE PICTURES!]
posted by Violet_Shade 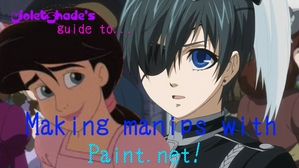 I have noticed we are getting so many new contributors to our club! We are happy about that, but some are clueless as to how they make them.

Where can I get some screencaps?
For Disney and some other non-disney:
link. HIGHLY recommended, screencaps are in the clearlest quality they can be, and you can request some!
Google Images/Bing Images(duh)
Screencaps section of the fanclub of your chosen Disney movie
Youtube(y'know, the print screen, copy and paste routine) 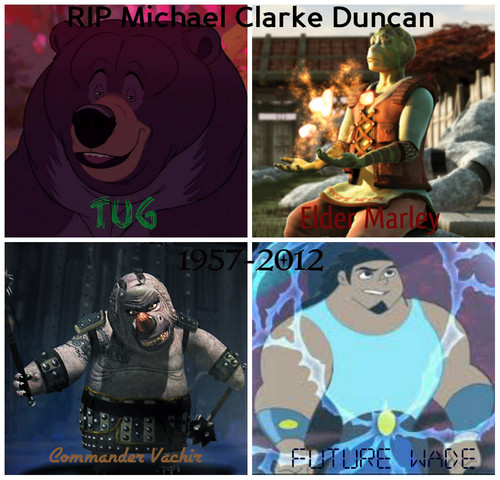 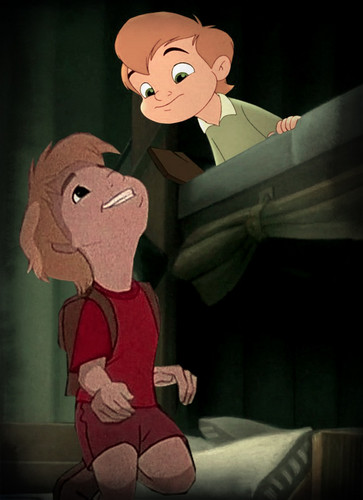 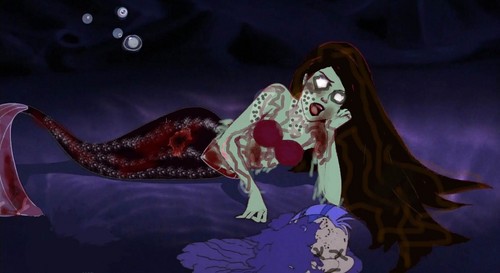 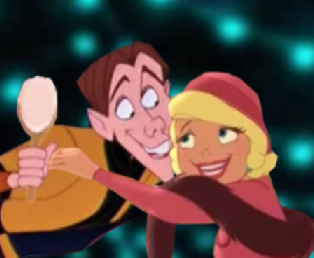 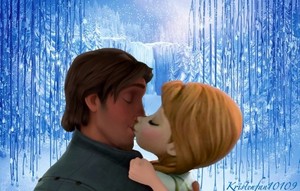 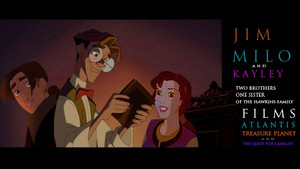