Jasmine stood on her balcony and watched the sun slowly set. In the distance she could see the ocean and the port. A couple of ships had docked there for the night, but not the ship she had been waiting for. She could see the shadowy silhouettes of ships' sails, but it only filled her stomach with dread.

The large gates to the palace slowly opened, catching Jasmine's eye. She peered over the edge of the balcony and watched as a gray carriage made its way inside. Jasmine's breath caught and her heart started to race. Gray carriages were typically only used by the royal navy and kingdom sailors.

Jasmine quickly turned and ran back into her room. She ran across her room and flung open her door. She didn't stop running until she reached her father's throne room. She tiptoed towards the door. It was slightly ajar and she peered inside. The Sultan was sitting in his golden throne as a man approached him. Jasmine assumed the man was the one in the carriage. He gave her father a rushed bow and then straightened up.

"What news do you bring, Commander?" the Sultan asked.

"I'm afraid it's not good," the Commander replied. "It seems The Dauntless is missing."

Jasmine let out a small gasp, but covered her mouth with her hand to keep from being heard. Her fiancee, James Norrington, was the captain of The Dauntless. He had gone out a couple months ago in search of the lost princess, Ariel; who's ship had sunk after being hit by a storm. Jasmine had tried to persuade him not to go, but he said it was his duty to look for her since their kingdoms were allies. Ariel had been engaged to marry Jasmine's best friend, Eric, when she was lost at sea.

Lost. That's exactly what Ariel was. If no one had found her by now, they weren't going to.; her ship went down six months ago. This is what Jasmine had tried telling James, but he wouldn't listen. Now his ship, his crew, and him were all missing, too.

"An entire ship can't just be missing," the Sultan replied.

"That's what we thought, too, your highness. But so far no one has been able to find any trace of the ship or its crew."

"That's unacceptable. My daughter's fiancee, the future ruler of this kingdom, is aboard that ship. Find it. Send a hundred ships if you must."

The Commander frowned. "Sir, no one wants to go anywhere near the site where Princess Ariel went missing." The Sultan gave him a cross look. The Commander started to fidget awkwardly. "Stories are starting to circulate of that area being haunted. When ships and people go missing without an explanation, sailors tend to make up explanations. In this case the ghost of the princess haunts the sea, bringing ships down to Davy Jones' Locker."

Jasmine narrowed her eyes at the man. It was all she could do not to barge in there curse him out. They were just going to abandon her fiancee because of ghost stories? That was absurd. Only foolish men believe in nonsense such as ghosts.

"Perhaps," the Commander said, hesitantly, "The Dauntless sank like the other ship. It could be at the bottom of the sea, along with- regrettably- Captain Norrington. Sending more ships might not help. It has been three months, your highness. It's possible the Captain may not be coming back."

This time Jasmine didn't hold back. She pulled open the door and stormed inside the throne room. Both men, startled, looked over at her. She marched right up to the man, stopping only inches from him. He gave her a small bow.

"My fiancee is still out there- alive! How dare you be so quick to count him out?" Jasmine demanded. She was practically shouting and her father clearing his throat told her she was not being ladylike. But she didn't care. "Do as my father said and find him."

Jasmine spun around to face him. "Father, I know James is still out there; still alive. We can't abandon him."

"Jasmine, let me handle this."

Jasmine's eyes grew wide. She knew that tone; it was the tone he always gave her when she thought she was wrong and being unreasonable. It meant her father was going to call off the search.

"It's getting late, dearest. Perhaps you should retire to your room for the evening."

Jasmine just stared at him. This couldn't be happening. Her father gave her a stern warning look and she slowly walked away and returned to her room. She sat down at her vanity and looked at her reflection in the mirror. Her black hair was gathered in a braid that was draped over her shoulder and was topped off my by her tiara. Around her neck hung a gold chain with a simple, golden, anchor. James had given it to her the night before he left. He told her that he was anchored to her and would always return to her, no matter what. Jasmine ran her fingers over the anchor and let a tear roll down her cheek. She couldn't accept that she would never see him again.

Outside Jasmine heard the sound of horse hooves on the marble as the carriage made its way out of the palace gates. She walked back out onto her balcony. It was dark outside now, but she could still see the ocean in the light of the crescent moon. It stretched on forever and Jasmine knew that James was out there somewhere.

And she was going to find him.

She changed into a more form fitting dress- hoping it wouldn't attract too much attention- took off her tiara, then grabbed some jewels and money. She quietly snuck out of the palace and hurried towards the dock. She was going to barter a ride from one of the ships on the dock and find a crew that couldn't be scared away by ghost stories. 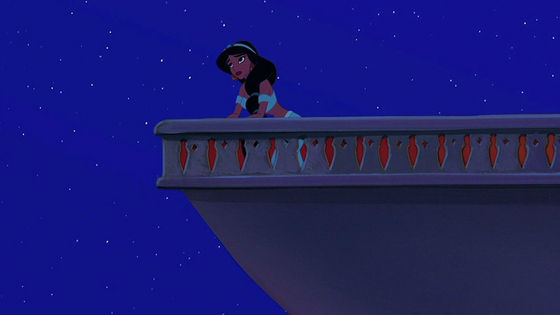 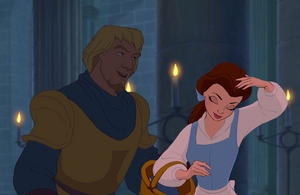 “I like him a lot, Phoebus.”
Belle excitedly spent the best part of the day with her cousin, showing him the ropes of Disney High. It was wonderful to see him again. Phoebus had always treated her with an older brother-type affection, which she returned. He was a joker but could be serious when it was required and certainly a boy with a kind heart and the ability to see injustice when it was right in front of him. Belle could remember a time when they were a little younger and they had gone to see the Festival of Fools in Paris on their own. A young boy with a hunchback had been teased and tortured by the crowds but Phoebus...
continue reading...
2
Disney High Part 12:
posted by PrincessBelle2 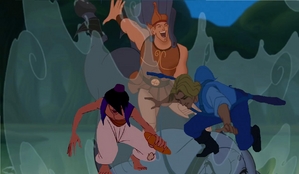 "Yeeha!"
Belle felt nervous as she pushed open the door marked Pool. She didn’t know whether you were allowed in the pool area fully dressed, but then she spotted Meg a little way away, reclining on a white plastic sun-lounger as the boys splashed around like mad fools. Well, almost all the boys.

“Yeeha!” crowed Hercules, showing off his prowess by wrestling with one of the giant inflatable dinghies. John laughed as he was splashed and then laughed even harder seeing Aladdin with his hair all over his face.

“You!” John splashed him. “You look like such a nerd!”...
continue reading...
2
Disney High Part 8:
posted by PrincessBelle2 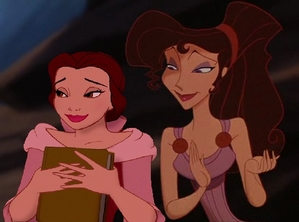 "Belle, you've gone pink as your dress!"
Belle woke the next morning, feeling strangely cleansed, despite all she’d been through the previous evening. She stretched and pushed herself out of bed with a yawn. Snow White had her head under the pillow and she groaned upon hearing Belle awake.

“The bell’s about to ring,” Belle pointed out and a second later it did. Snow White groaned again. “Why do you always have to be right?”

“Come on!” Meg battered her with her own pillow. “Get up and at ‘em! It’s the football game today, remember?” She looked over at Belle. “You alright, sweetie?”...
continue reading... 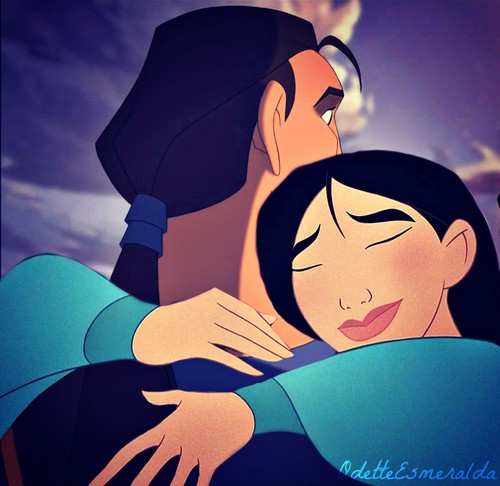 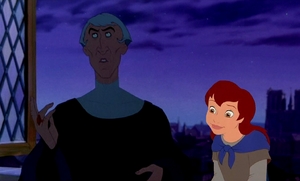 "Praying is a good way to cleanse the soul."
“But why can’t I go with you?” Belle asked.

The seven year old wriggled her shoulders inside her slightly baggy grey tunic. It was a little chilly inside the Palace of Justice. Sarah smiled and put her hands on the child’s shoulders.

“Because the Captain won’t allow someone as small as you aboard the ship, Belle. When you’re older, maybe, but for now, you have to stay here.”

“You’ll be a good girl for Mr Frollo, won’t you?” added Clayton. 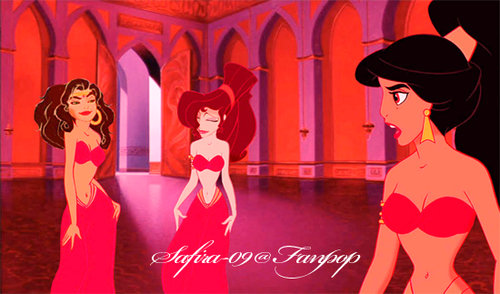 7
Jealous?
added by Safira-09
Source: disney and me 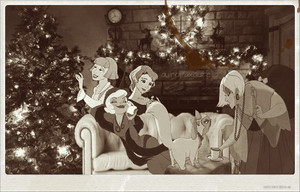 Shantie x Mowgli - From Kids To Adults
added by alexpatterson 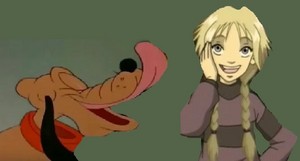 Elyon and Pluto
added by TheDogPoundMan 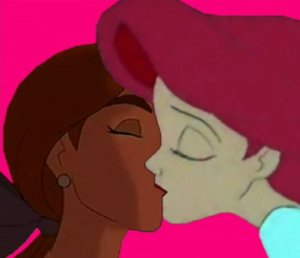 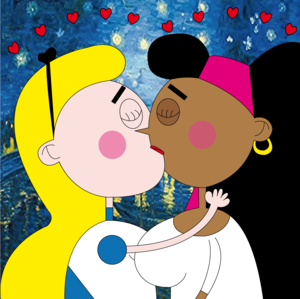 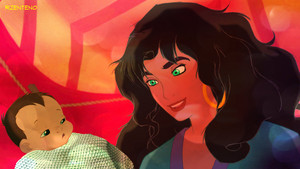 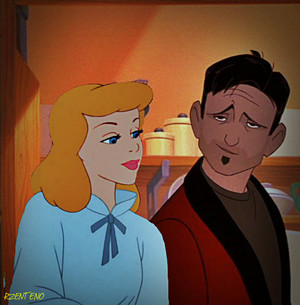 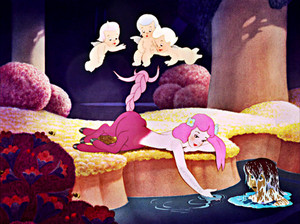 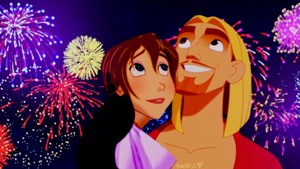 Cause baby, you are a firework
added by KristinART_18 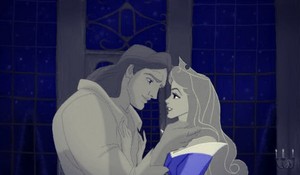 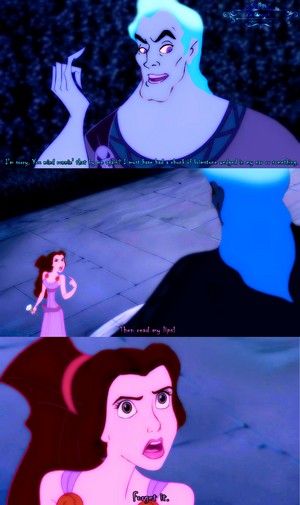 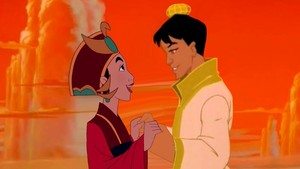 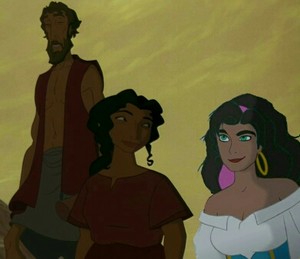