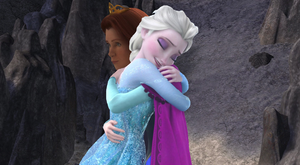 “I’ve got so much to tell you.”
Fiona slid down the other side of the hill and exclaimed joyfully “You did it! You rescued me! You’re amazing! You’re wonderful! You’re-!”

She was cut off as Shrek abruptly landed on top of poor Donkey. Elsa slid down beside them and ran up to hug her cousin. “I’ve got so much to tell you,” she smiled.

“Yeah, what happened? I heard you got married,” Fiona said, frowning slightly.

Elsa glanced at Shrek and Donkey. “It’s a long story,” she muttered.

Fiona nodded, understandingly. They could talk about it all later. Now she walked up to Shrek and stated “I am eternally in your debt, good Sir Knight.” Donkey cleared his throat and she petted him. “And where would a great knight be without his noble steed?”

“Alright, I hope you heard that,” Donkey said to Shrek. “She called me a noble steed. She think I’m a steed.”

“The battle is won,” Fiona declared. “You may remove your helmet, good Sir Knight.”

“Please?” Fiona smiled. “I wouldst look upon the face of my rescuer.”

“Oh, no you wouldn’t-st,” Shrek insisted.

“But how will you kiss me?”

Elsa felt her jaw drop as Shrek backed into the slope with a yelp of “What? That wasn’t in the job description!”

“No, it’s destiny,” Fiona insisted. “Oh, you must know how it goes. A princess locked in a tower and beset by a dragon is rescued by a brave knight, and then they share True Love’s First Kiss.”

“Um, Fiona, I really don’t think that Shrek’s your True Love,” Elsa began as both Donkey and Shrek began to laugh.

Fiona put her hands on her hips. “What is so funny?”

“Of course you are, you’re my rescuer,” Fiona insisted. “Now remove your helmet.”

“Just take off the helmet.”

Elsa and Donkey looked back and forth between the two like they were watching a tennis match, as Fiona ended the debate with a loud “NOW!”

“Alright!” Shrek exclaimed. “Easy! As you command, your Highness.”

Elsa watched Fiona’s expression turn from curiousity to disappointment as Shrek tried to give her an appealing look. “You’re an-an ogre.”

Well, at least she hadn’t screamed and fled, Elsa thought, but then, in her condition, why would she?

“Well, yes, actually,” Fiona replied. “Oh no, this is all wrong. You’re not supposed to be an ogre.”

Shrek sighed. “Princess, I was sent to rescue you by Prince Hans. He’s the one who wants to marry you.”

“Well, then, why didn’t he come rescue me?” Fiona asked.

“Good question,” Shrek replied, now removing the rest of his armour. “You should ask him that when we get there.”

Elsa went over to help him take off his arm guards. Shrek looked surprised but said nothing.

“But I have to be rescued by my True Love,” Fiona insisted, “not by my cousin, some ogre and his pet!”

“Well, so much for a “noble steed,” Donkey said.

“Well, I’m sorry but your job is not my problem,” Fiona insisted, arms folded. “You can tell Prince Hans that if he wants to rescue me properly, I’ll be waiting for him right here!”

So saying, she sat down on the nearest rock. Elsa knew her cousin well enough by now to know that no amount of words would move her from the position, but then again, maybe they didn’t need words.

Shrek did dare. He grabbed her and slung her over one shoulder like a sack. “You two coming?”

“Hey, what are you doing? Put me down!” Fiona shrieked.

Elsa knew that she ought to say, even do, something to get Shrek to put her cousin down, but the situation seemed suddenly so hilarious that she couldn’t help laughing.

“Put me down!” Fiona demanded, battering at Shrek. “Elsa, do something!”

“Um, sorry, he’s a bit...tall,” Elsa spluttered through her laughter.

“Thanks a lot! Put me down or you will suffer the consequences!” Fiona snapped. “This is not dignified! Put me down!”

After a few hours of good solid walking, however, she gave up and resigned herself to being carried like a sack over Shrek’s shoulder and listening to Donkey’s chatter. Elsa had stopped laughing now and we beginning to wish that someone would carry her as well, her feet were beginning to ache with jogging to keep up with Shrek’s long strides.

“Ok, ok, how about this?” Donkey said. “Say there’s a woman who digs you, but you don’t really like her in that way; how do you let her down real easy so her feelings aren’t hurt but you don’t get burnt to a crisp and eaten? How you do that?”

“Well, just tell her she’s not your True Love,” Fiona said. “Everyone knowst what happens then they find their-hey!” she added as Shrek gave her a jolt to shake her out of her daydream mood. She sighed. “The sooner we get to Southern Isles, the better.”

“And what of my groom-to-be, Prince Hans? What’s he like?”

“Well, Shrek thinks he’s compensating for something, which I think means he has a really small-”

“Donkey!” Shrek cut in, dropping Fiona and stepping into a nearby pond to wash off.

Elsa managed a giggle. She could guess what Donkey had been about to say. Something about all this bothered her, though. She had a feeling that she had heard of Prince Hans before Shrek or Donkey even mentioned him, and she wished she could remember how.
“Yes, well, I imagine he’s just jealous that he can never measure up to a great ruler like Prince Hans,” Fiona retorted, folding her arms.

“Yeah, well maybe you’re right, Princess,” Shrek shrugged, “but I’ll let you judge for yourself when we get there tomorrow.”

“Tomorrow?” Fiona glanced at the sun, which was beginning to set. “It’ll take that long? Shouldn’t we stop to make camp?”

“No, that’ll take longer,” Shrek countered. “We can keep going.”

Elsa got to her feet. “Shrek, she’s right. We should stop at night. There’s robbers in the woods and who knows what else?”

“Whoa, time out, Shrek!” Donkey exclaimed with a jump. “Camp is definitely starting to sound good!”

“Come on, I’m scarier than anything we’re going to see in this forest,” Shrek insisted.

“I need to find somewhere to camp NOW!” Fiona bellowed, suddenly in his face.

Eventually, Shrek found a cave which Fiona stated would be perfect, with “a few homey touches,” such as a door torn from the bark of a large tree.

“Do you want me to come in a read you a bedtime story, ‘cause I will,” Donkey called.

Alone at last, Fiona sighed and watched as her slight, human figure became that of a large green ogress . “So, go on, then? Why are you here with a couple of jokers like them when you should be ruling Duloc with-”

“With a husband who doesn’t love me?” Elsa interrupted. She sighed. “He was just using me, Fiona, for my powers. He doesn’t really want a wife who just happens to be able to control ice and snow, he wants someone he can use as a weapon against those he’s at war with.” She lay down on a large slab of stone. “Forget it. True Love doesn’t exist for me.”

Elsa shrugged. “Don’t know what I’m going to do now. Maybe I’ll just stay with those two.” She gestured towards their make-shift door. “Make an ice extension on Shrek’s house, have an indoor ice rink. I think Donkey would love that.”

Fiona sat up, slightly. “What are they saying? I can’t hear.”

The two girls moved cautiously to the door and listened, in time to hear Donkey saying “Hey, Shrek, what’s your problem, what you got against the whole world anyway?”

“Look, I’m not the one with the problem, Donkey, it’s the world that seems to have a problem with me,” Shrek replied. “People take one look at me and go “Argh, help, run, a big stupid ugly ogre!” He sighed. “They judge me before they even know me. That’s why I’m better off alone.”

Elsa glanced at Fiona, noticing that her cousin looked slightly downhearted by that.

“You know,” Donkey said, “when we first met, I didn’t think you were just a big stupid ugly ogre.”

And neither did I, Elsa thought, before closing her eyes and drifting off to sleep.

“Keep looking,” Farquaad ordered. “She’s got to be out there somewhere.”

He winced, holding onto his chest. Ever since Elsa had hit him with her powers, accidently, he reminded himself, she hadn’t done it on purpose, he had felt cold inside, and it was spreading. It ached, although not as much as being without Elsa.

“Sit down, my Lord,” one of his servants ventured, offering him a chair. “You’re not yourself.”

“I’m not going to be myself until I get my wife back,” Farquaad retorted, although he took a chair anyway. “What?” he added, seeing his Captain suddenly staring at him.

“Your hair, my Lord,” the Captain replied.

Farquaad frowned and felt it, and then his servant shoved a mirror in front of him. He stared. A few strands of his hair had turned white. Before he could say anything, though, there was a great crash as the front door was ripped almost right off its hinges and the Captain and his guards whirled around, weapons ready as another barrage of guards marched into the castle, led by...

Prince Hans smirked as he raised his sword. “Just in the neighbourhood and thought I’d invade, Lord Farquaad.”

“Oh, I wouldn’t do that if I were you, Farquaad,” Hans smirked. “I’ve got my guards posted all over this place, and besides, it’s not you we’re here for, it’s that witch you married.”

“Oh, I know what she is. And I know she’s done that to you.” He pointed his sword at Farquaad’s hair. “She’s going to be done for high treason.”

“What, Farquaad? You’ll be frozen solid soon and even Princess Elsa can’t save you. I give you two days tops before you’re nothing but ice forever, and then your Princess is going to be executed for killing her own husband.”
elaine2018 likes this 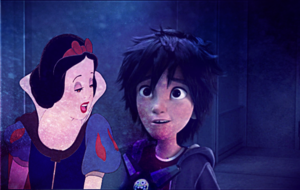 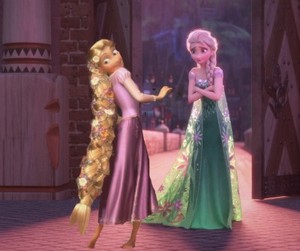 2
Elsa and Rapunzel
added by ajotma 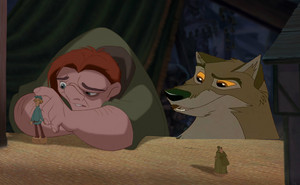 2
Balto and Quasimodo
added by Winxclubgirl202
Source: me 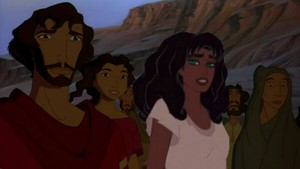 3
"We Will Get There Through The Night"
added by rzenteno
Source: Rzenteno, Disney Crossover 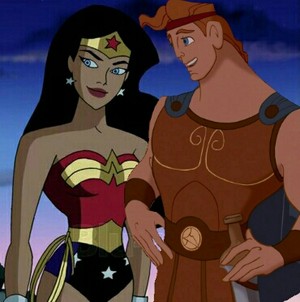 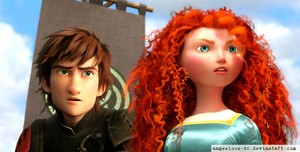 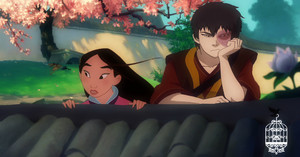 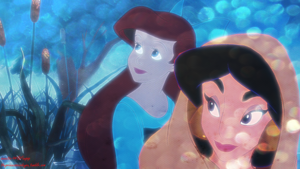 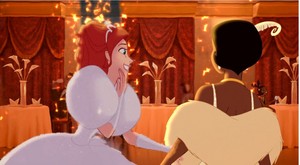 4
Giselle and Tiana
added by identity511 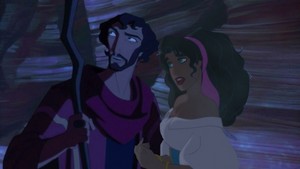 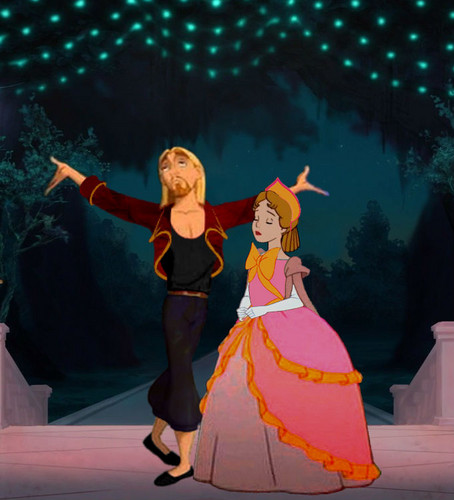 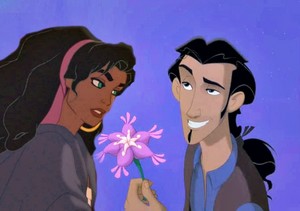 2
A Flower for Esmeralda
added by ajotma

Melody as Sakura with Winter coat
added by alerkina4the5th 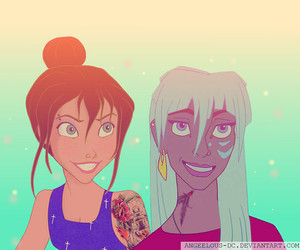 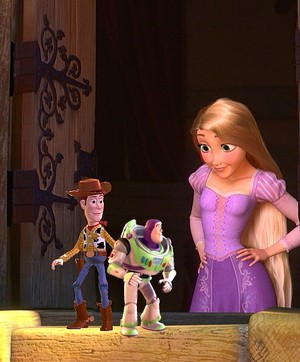 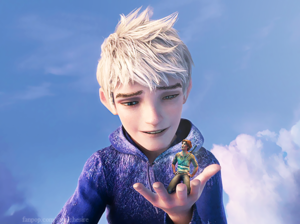 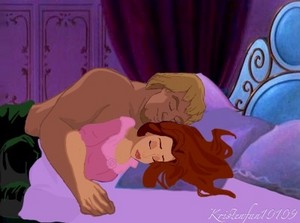 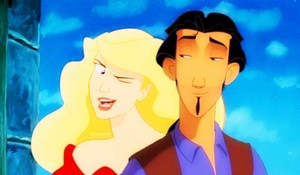