over a year ago princecatcher93 said…
First of all I agree with lot about what you said. I find them cute but really nothing like how they really are.
Second I kind of hate how she made a friendship between Merida and Mulan also.
Third I found another one of Pochontas smiling (Maybe the same one, #63?)
Fourth: I don't like it how Merida is 'so cool' while the others aren't really anything like their movie selves.
But yea, their funny and cute but I wish she follow what their really like.
Here's my favorite one. 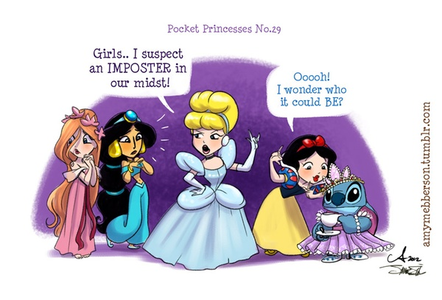 over a year ago tiffany88 said…
These are NOT official Princess artworks, these are someone's fanarts. The Pocket Princesses more like caricature from the Princesses. I think it's really rude that you try to tell someone how to draw. She draw them like she wants and actually they're pretty popular. (I'm also a fan of them)
As an artist I hate when people try to say me how to draw, for an artist this is really hurtful.

AudreyFreak commented…
I'm not telling her and never did. In fact I specially SAID I love her style. I'm an artist too, and I realize that with putting your art out there, you get criticism, good or bad. And maybe she doesn't but as an artist I try to capture what's there, not what I want to see, which is what she does. It's not evil, just bothersome because I'm tired of people looking at the DPs at a surface level. over a year ago

hajirah4 commented…
Woah. As annoying as I may be right now, this is the only word I have to describe your post. (hides behind bush, fully armoured) over a year ago

over a year ago jainabieber7 said…
I adore the PP's. I disagree about your thoughts on Rapunzel's drawing, she looks so adorable and cutesy, which describes her personality perfectly. I look forward to every Friday to see what Amy comes up with :) I do agree about Mulan though... Mulan is very peaceful and quiet, not this rebellious, obnoxious Merida copy cat. I guess I'd probably be a little more outgoing after saving the whole country of China, but definitely not cocky and loud like she kind of is in the PP's.

over a year ago MaidofOrleans said…
I agree with what you've said about her interpretations of the princesses, but ultimately I think it's up to her how she wants to portray them. I adore the Pocket Princesses, and the main reason why is because I don't think of them as the DPs. I think of them as separate characters that are based off of the DPs. If I think of them like that then I don't get annoyed with their inaccurate personalities.

dclairmont commented…
That's a good way of looking at it c: over a year ago

over a year ago Swanpride said…
I agree with what you said about the interpretations of the princesses...it's the main reason, a lot of jokes fall flat (especially when they are about Cinderella's cleaning obsession). When she hits the personalities or something about their movies spot on, the comics are really funny (for example Tiana being annoyed because Rapunzel misused one of her frying pans, or Snow White having developed an aversion against apples), but when she dabs into the clichés, they don't really work that well. I have no issues with the drawing style, though. I think it fits.

AudreyFreak commented…
I agree completely. I think that's my main issues (and I do LOVE her drawing style- that's my favorite part). I normally smile or chuckle at them but the one time I LOL'd was seeing the "No Browsing" sign under Belle's dress. Hahaha over a year ago

over a year ago PokeBelle said…
Awwww! I wish I had a facebook account so I could see more of these, they are cuuute! :)

MouseEars commented…
She has them on her Tumblr account too! over a year ago

over a year ago snowsowhite said…
I love them, but as you said she puts Rapunzel a lot and I don't like seeing Rapunzel and Merida so much! Its annoying!
Something to say? Sign in with one of these options:
Log in to Fanpop! Not yet registered? Create a new Fanpop account!