1
elizabeth swann
posted by check-it-out13
Elizabeth Swann (later Elizabeth Turner) is a major character in the Pirates of the Caribbean film series produced by Walt Disney Pictures. She appears in Pirates of the Caribbean: The Curse of the Black Pearl (2003) and its two sequels, Pirates of the Caribbean: Dead Man's Chest (2006) and Pirates of the Caribbean: At World's End (2007). Elizabeth is portrayed by Keira Knightley, and as a child by Lucinda Dryzek in the movie's prologue. She is known to use the alias "Elizabeth Turner", but this later becomes her married name when she weds the character, Will Turner (played by Orlando Bloom).Elizabeth is a spirited, intelligent, and independent-minded character. Her beauty attracted the attention of several men including Will Turner, Hector Barbossa, Pintel and Regetti, James Norrington , Sao Feng and Captain Jack Sparrow. Throughout the three films, she transforms from a proper lady into a courageous pirate. Piracy and life at sea have always fascinated Elizabeth, but she is revolted by pirates' aggressive, wild nature, especially Captain Jack Sparrow, who made his escape from Port Royal at her expense, though she is grateful to him for saving her life. Even after becoming a pirate, Elizabeth retains her refined manners and morals, as well as her loyalty and compassion for loved ones (including Will Turner, her father, and later, Jack Sparrow and James Norrington).

Elizabeth adapted easily to piracy, for instance learning swordsmanship from her fiancé, Will Turner. She was able to defend herself against multiple opponents and could fight using two swords simultaneously. Elizabeth has natural leadership abilities, learned seamanship quickly, and possesses an innate talent for battle strategy, having devised defensive and offensive maneuvers against her opponents. She later uses a Chinese Jian sword and is seen carrying a multitude of other weapons on her person including knives, firearms, and what appears to be a small grenade.

She also would often speak her mind even if it meant offending others; for example she called a potentially dangerous enemy, Sao Feng, a coward right to his face. That is why Sao Feng replied, “Elizabeth Swann…there is more to you than meets the eye, isn't there? And the eye…does not go wanting.” (2007) Elizabeth was a bit of a tomboy and was a brave and resourceful woman. During her brief reign as Pirate King, Elizabeth proved to be very charismatic and encouraged the Pirates to face off against Cutler Beckett's fleet which showed that she had a talent for leadership. However there was a darker side to Elizabeth's personality as shown when she handcuffed Jack Sparrow to the mast of the Black Pearl in order to give her and the others time to escape from the Kraken, . However she felt extremely guilty for leaving Jack (though she told Jack that she wasn't sorry before leaving him to his doom) and was a member of the crew that went to rescue him from Davy Jones' Locker.

aperance:
Following the film's prologue, the beautiful Elizabeth Swann is approximately 20 years-old , about 5' 7" tall with a slender figure, brown eyes, and light brown hair. Having been raised in upper-class society as a governor's daughter, Elizabeth is a refined and elegantly-coutoured young lady.

In The Curse of the Black Pearl, she wears a dress style known as a Robe a L'Anglaise. As a young girl, she wears a blue dress in this style, and, eight years later, her father gives her a gold-colored frock to wear to Commodore Norrington's promotion ceremony. Elizabeth is kidnapped wearing only her long nightgown and a floral cream-colored robe, though Captain Barbossa later provides her a red dress that previously belonged to another lady; she is forced to return it just before being marooned on a deserted island, clad only in a long white chemise. After being rescued by Commodore Norrington, Elizabeth is loaned a Royal Navy uniform, the first time she is seen wearing men's attire. At Jack Sparrow's execution, she is once again fashionably attired, wearing a peach-colored frock and a picture hat.

In Dead Man's Chest, as Elizabeth's character and circumstances change, so does her wardrobe. Although she is first seen in an elaborate wedding gown and a long lace veil, Elizabeth later disguises herself as a cabin boy, wearing brown breeches, a white shirt, brown boots, a red waistcoat, a black belt, and a brown tricorne hat. She wears this garb throughout the film. Exposure to the sun tans her skin and lightens her hair.

In At World's End, Elizabeth first appears in Chinese peasant clothing and a coolie hat while paddling a small boat through Singapore's waters. She is forced to wear only a short robe upon entering Sao Feng's bathhouse. Later, Elizabeth wears a long armored coat while traveling. As a captive aboard Sao Feng's ship, Elizabeth has been dressed in a long red cheongsam, a sleeveless full-length blue overcoat (both probably silk), and a studded turquoise phoenix crown. She later dons Chinese armour. During her one day on the island with Will, she is clad in a black tunic, a part of her armor. In the scene set ten years later, she is wearing a long skirt and a double-breasted brocade waistcoat over a white puffy-sleeved shirt, probably cotton or linen.
keshari likes this 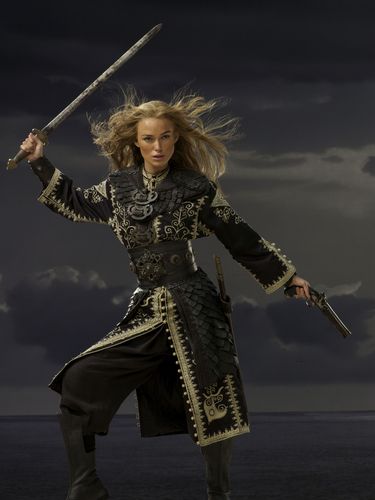 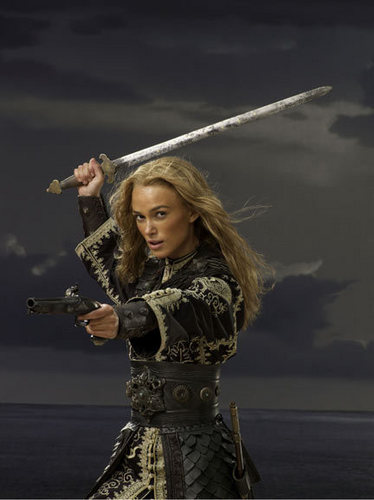 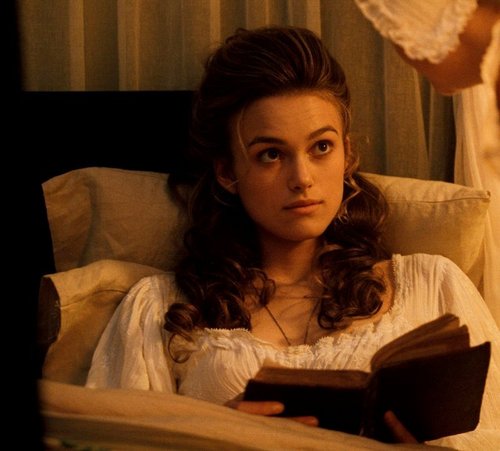 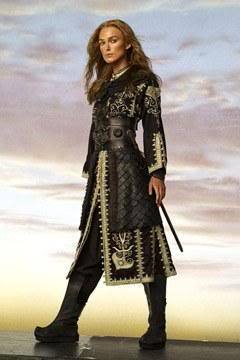 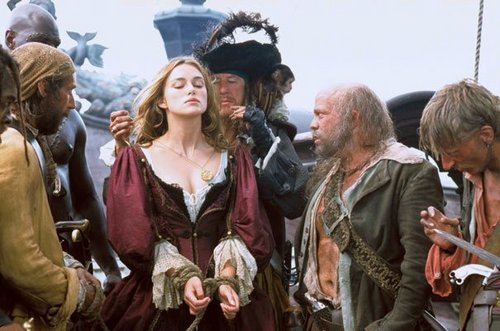 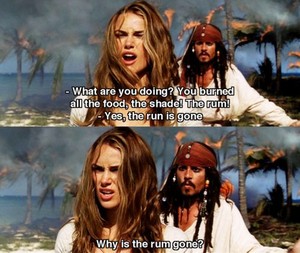 *Jack / Elizabeth : Pirates Of The Caribbean*
added by KEISUKE_URAHARA 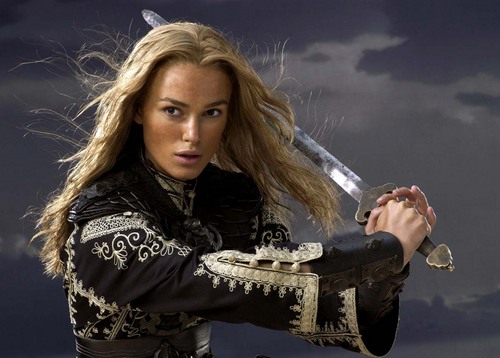 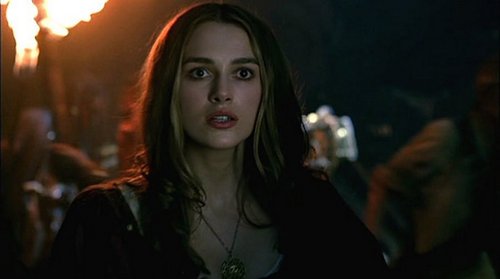 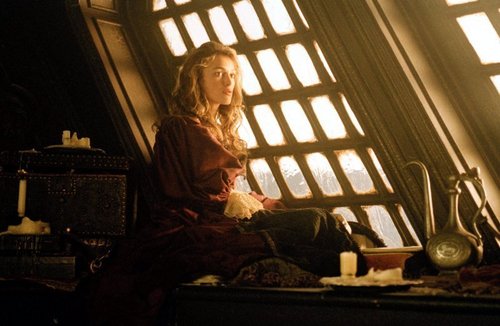 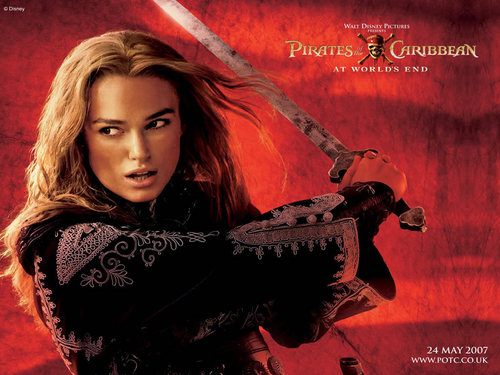 3
Elizabeth Swann
added by chameron4eva
Source: Not Mine 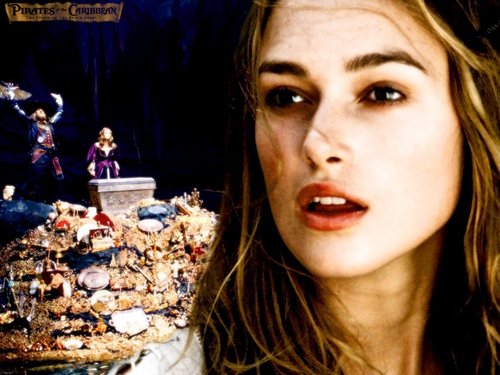 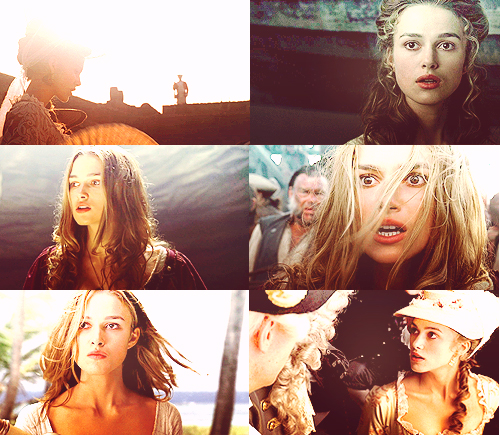 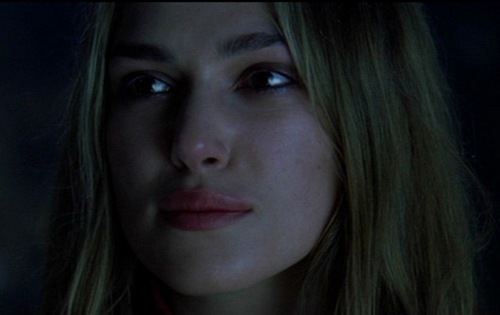 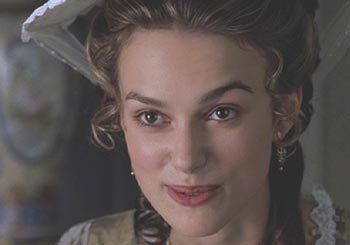 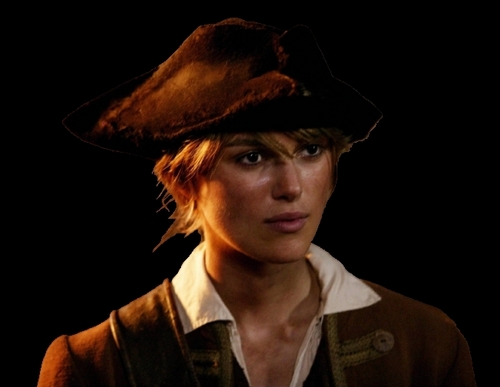 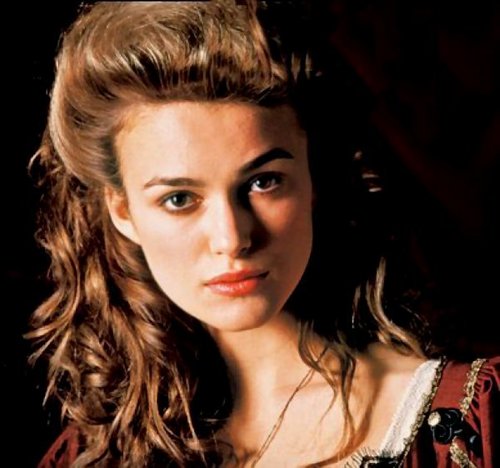