laughing :)
A/N: okay, so i just pulled this up from the dregs of my computer...apparently i got bored over x-mas and decided to write some eo lol xD

discription: Elliot and Kathy got divorced, and now he, with no place to go, is living with Olivia. He has been living with her for 5+ months. Kathy and Elliot's break-up (God don't we all wish that were to finally happen???) wasn't very pretty. Background info and such are in his flashback; don't skip ahead to that, It may disrupt the flow of things :P

Olivia smiled and bit her lip to hold back a laugh. It was Elliot's first Christmas being single, and was already getting harassed by Munch and Fin about the "Annual" Precinct Christmas Party.

"Yeah," Munch added, "Plus, you get to bring a date. They could…" he cleared his throat noisily, "Distract you…."

Elliot looked at him like he had just suggested that he should go naked. He was gladly relieved by the captain who had been tipped off by a bemused ADA Greylick.

"Come on guys," Cragen's voice was tinted with a hint of warning. "It's his first time in…" he paused there, clearly try to remember how long Elliot was married before finally giving up.

"Well, it's been a long time since he was single, and he doesn't need you two trying to plan his night for him."

Elliot threw Cragen a thankful look, before zeroing in on Olivia.

"Hey Liv," he said as he pushed past Munch and Fin, "Wanna go grab a drink?"

She shrugged and grabbed her coat, tossing his to him.

"I'm buying," He added as they made their way out of the bullpen. She smiled slightly and unconsciously fell into step with him.

The three remaining squad members watched them leave, each with their own particular expression; Cragen's amused, Fin's curious, and Munch's wistful. Suddenly, Munch's face broke out into a wide, evil grin. He turned back to Fin and Cragen.

"Let's make this a Christmas to remember…." And he launched off into a devious plan that would take all of the detectives to make it work.

"You okay Liv?" Elliot asked Olivia as they sat at the bar. Ever since they got there she had been silent, mainly swirling her drink around the cup.

Elliot took in her features in an attempt to diagnose his partner. Her hair was a little frizzy, but otherwise fine. She had slight bags under her eyes, but that was just one of the minor drawbacks from the job, nothing a good-night's worth of sleep couldn't take care of. Her eyes were bloodshot, and he knew that it meant that she had been crying. He wrapped his arm around her shoulders and pulled her close to him in a one-armed hug.

"Olivia, you couldn't have helped them. Not in a million – " she cut him off and tuned to face him. It damn near broke his heart to see her this close to tears.

"Look at me," He demanded. She looked up from her glass and into his eyes.

She gave him a small lopsided smile, before nodding.

"I guess you're right…Hold on a sec. I'll be right back." He dropped his arm and watched her head for the bathroom. He waited a few minutes before paying for the drinks and picking up her coat. When she finally reappeared, he gave her a wide grin, and, for his efforts, received one of his own. He gave her her coat, and they walked out.

She slid into the passenger seat as he did likewise onto the driver's side.

After he started the engine and began heading off to her place, he asked her, almost hesitantly, "You okay?" She nodded, and engaged him in conversation that lasted for the entire car trip.

He knew that she didn't like crying, because it made her feel weak. It was just one of the many things that he loved about her.

Love her? Where did that come from?

Elliot shook off the thought, before turning back to the road and attempting to form a decent retort to Olivia's mock insult.

Laughing as she tried to unlock her apartment door, but kept missing the hole from shaking so hard, Elliot and Olivia started as the door across from hers was thrown open to reveal a cranky old man.

Olivia was surprised at his sudden outburst, seeing as her neighbors usually were quiet and kept to themselves. Spotting Elliot, he nearly made a rude comment about Olivia and men, but decided not to. He valued his life and safety, and did not think that the man would take kindly to his insulting the woman.

"I'm sorry to disturb you, sir. We'll go inside now," Elliot said respectfully – the man simply nodded and closed his door with a grumble, registering that he was easily two-thirds Elliot's size.

"Sorry about that El," Olivia apologized a few minutes later. "I don't know why he was so upset…you've been living here for over five months, you think he would have gotten used to the noise by now."

Elliot asked innocently, "What noise? It's not like I do this all of the time…" And he launched himself at Olivia, pinning her to the couch and tickling her side relentlessly.

During the last five months that Elliot and Olivia had been living together, they had become closer, much closer than any other of their ten years. They worked in total sync, always side by side, and always having each other's back.

Originally, his staying at her place was to be temporary, but after a few weeks, they both stopped looking for a place for him. Kathy and Elliot's separation had been extremely ugly, seeing as the only reason either of them had stayed together was for Eli. Elliot had been trying to make it work, but when he found out from his children that Kathy had been, and currently was, cheating on him, he had packed up all of his stuff and moved out. He could still remember it very clearly:

He had confronted Kathy about Rick, her boyfriend. They yelled, she screamed, and in the end, Dickie and Elizabeth had snuck down from the stairs and were eavesdropping on their parents' argument. In the end, Elliot had just given up trying to talk to Kathy. He had gone upstairs, only to find Dickie and Liz on the stairs. They stood up and let him pass, hanging their heads guiltily.

Elliot paid them no attention, and ran upstairs and packed all of his stuff, leaving his wedding ring on the bed-side table. He had shoved his possessions into the back of a cab, and gave the cabbie instructions on where he wanted to go. Eventually he ended up on Olivia's door-step, and had been taken in by her. She gave him a place to sleep, and they had talked about what had happened for hours.

Elliot continued to tickle her until she finally fought back. She found a soft-spot on his side, and surprised him just long enough to flip them, putting her on top. Neither of them either noted or cared about the fact that she was straddling him.

"Okay, fine," Elliot panted. "You win, miss Benson." He knew that she hated to be called 'Miss'.

"You know I hate being called 'Miss'."

Elliot gave her a sly smile before flipping her on her back swiftly. Olivia ememated a gasp of surprise, her eyes wide.

He then re-started the war, this time giving himself the upper-hand.

She still beat him anyway. 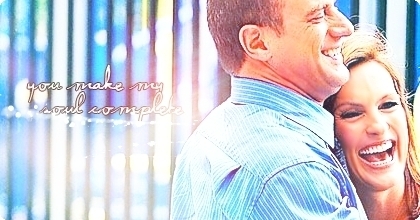 awww; arent they cute! this is how they're laughing in my little ficlet <3
Serienjunkie91 and Midnight_love15 like this
QueenAnnelise Awesome!!!
Midnight_love15 i ABSOULUTLY LOVE IT!!!! :)
v30CRUSH amazing
4
E/O fanfic episode: Maybe Tonight
posted by livi_wells
Maybe Tonight...Maybe I'll fall...Maybe he'll crash through my walls...maybe at last love will come back and take me deep into his arms...Maybe the heart, that falls apart finally wins...Maybe tonight I'll finally fall in love again...

Olivia sat slumped at her desk. The squad room was empty, that was why she was here. Tears rolled from her cheeks, falling softly onto the letter she was clutching. It was cruel. Her boyfriend had broken up with her...Through a letter. He didn't even have the guts to say it to her face.

It was then she felt a familiar hand on her shoulder.
"You alright, Liv?"...
continue reading...
3
EO fanfiction - the first meeting
posted by RosalynCabenson
Title: Whole Again – The first Meeting

Note: My first EO fanfiction (and my first english one ^.~)
Thaks to Eline_K for the beta <3

“I want a new partner.”
That was what she said to the captain.
Now sitting at her desk at her new job at Computer Crimes, the words of her former partner Elliot came to her mind.
“Look, we both choose each other over the job. We can never let that happen again. Otherwise we can’t be partners.”
And they echo in her head again and again causing her a bad headache.

That was right before she had left...
continue reading... 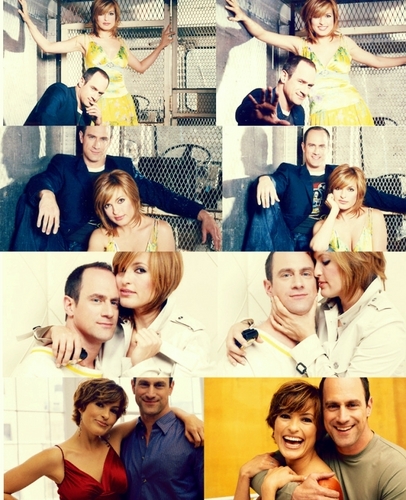 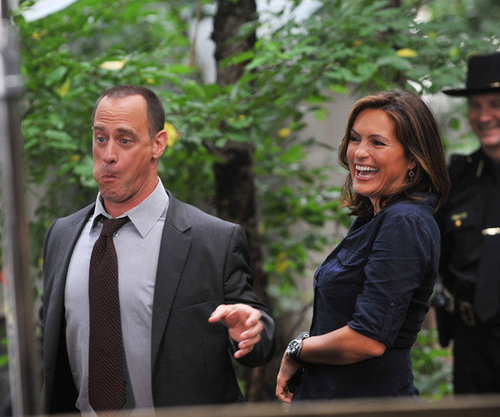 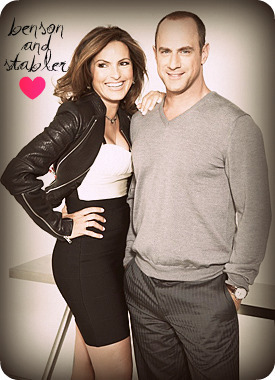 5
Mariska and Chris
added by benslerforever7 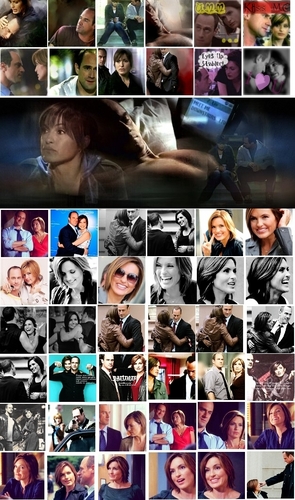 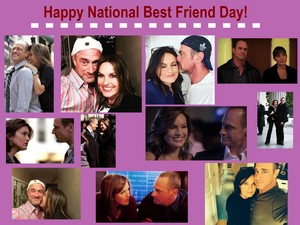 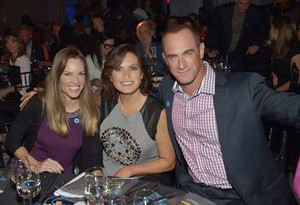 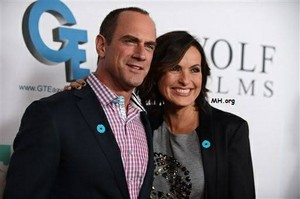 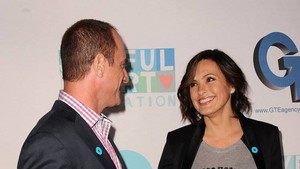 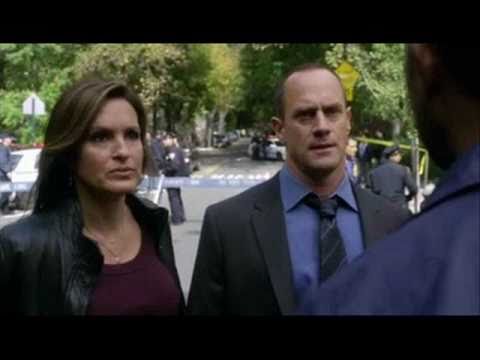 7
I'm sorry
added by Serienjunkie91
Made by csifanarts. It was posted on Youtube.
video
elliot
liv
fanvid
i'm sorry 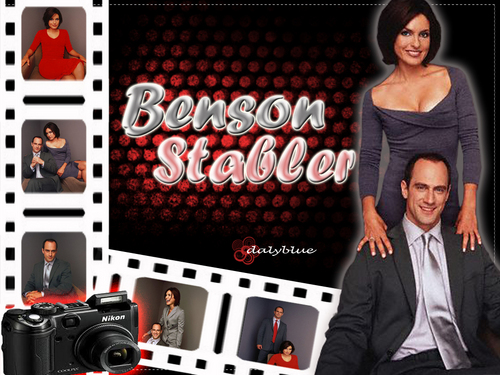 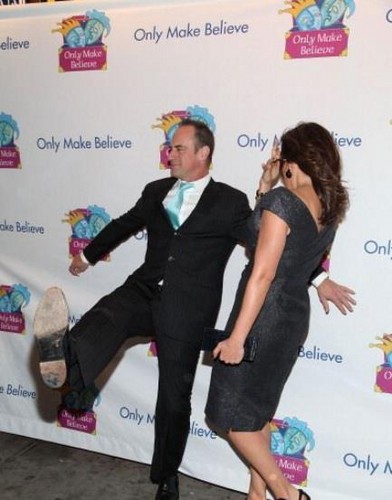 Chris & Mariska - Only Make Believe
added by SVU_Smacked
9
E/O fanfic episode: Dream Catch me
posted by livi_wells
Dream catch me when I fall...Or else I wan't come back at all....

Olivia lay in one of the squad room bunks, staring at the bottom of the bunk above her. She didn't feel like going home, it was nearly a cold case and there wasn't time for her own comfort. She rolled over as she faced the digital alarm on the table beside her; 3:45am. But she couldn't sleep. Finally she drifted off, dreaming of him...

She awoke when someone sat at the foot of her bed. The clock read 10:45pm. She sighed as she sat upright and realised who was there. Elliot Stabler was sitting there, in a white singlet. His toned...
continue reading... 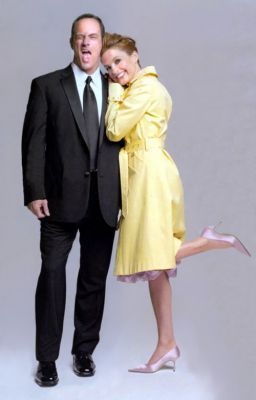