3
Baptism by Blood- Fanfic
posted by Celina79
A Fanfic written by triciabyrne1978 on brewster_a_week on livejournal.com.
Spoilers for Demonology!

Emily wipes the blood from her nose and stares up at the church before her. This is the closest she's come to a church -- on her own when it wasn't Christmas or Easter -- in years. She's hardly a devout Catholic anymore. She considers herself more a woman of faith -- in what though, she's sometimes unsure.

Her feet slowly climb the steps, and she almost has to laugh at the irony of how royally fucked up this entire situation is. In large part, a priest acting like an asshole twenty years ago drove her away from this institution. Watching Matthew deteriorate after holding her together took care of the rest, and now, here she stands, on the aftermath of another asshole priest out more for his own agenda than God's, back in a church.

Her fingers tremble slightly as the tips dip into the holy water, blessing herself almost automatically.

She's grateful for the empty pews, she's not sure she can deal with people right now, which is why she turned down Dave's offer to take her somewhere.

She genuflects, and takes a seat to one side toward the back, where she can see the exit rather than have her back toward it completely. Slowly lowering the kneeler, she gently perches herself on the edge. A priest -- from the quick glance she grants him it looks like Rossi's friend -- comes out from what she assumes to be the sacristy and moves across the altar to the lectern before taking notice of her. He nods his head and silently moves on, for which she is thankful.

Emily sniffs and regrets it. Her nostrils are still raw and the action only helps a few tears to spring forth.

These last few days have been hell on her. Going back to a time she thought she had put behind her long ago, feeling so open, so exposed to her team. In a way she's surprised by the support she has gotten from them.

Hotch should have taken her aside and bitch-slapped her a lot earlier than he did.

And Rossi... She has no idea how to interpret him right now.

Even Morgan being an ass to her had been exactly what she needed. That dose of reality kept her grounded; regardless of how much she had resented it at the time.

She looks at the picture clutched in her left hand once again. She's shaking, and right now she's not entirely sure it's because of the cold. The snow that had collected on her coat and in her hair has already melted, but she's more numb than anything else.

Matthew Benton, Emily Prentiss, and John Cooley. To put a new twist on an old song, they were three American kids doing the best they could. But they hadn't been in America, and after moving around so much and speaking so many different languages you got tired and just wanted to relax and fit in.

Her finger traces the faces of each of them, so young, so innocent, and so much like so many of the faces she sees in the case files every day.

She once had told JJ that when you moved around a lot you got used to being whoever people wanted you to be.

The girl that looks back at her from the picture had no idea who she was. She was just trying to find her niche and fit in. Trying to be who she thought people wanted her to be.

She'd had no idea that those actions alone would help to bring her closer to finding herself. The true realization hadn't come about until she was in her second year at Yale. When her education and everything finally started to become more about her own goals and aspirations and less about what her mother wanted from her, or the image that being an Ambassador's daughter and having a Yale education could do for her. When she had finally thrown politics and any connection that she had to it to the wind.

Looking back, it was impossible for her to imagine what her life would be like if she'd had the baby. For one thing, she'd now be the mother of a nineteen year old. John… Hell, she hadn't even had a chance to find out what he did now. They hadn't spoken in years before he'd looked her up to let her know about Matthew – and even then she hadn't trusted herself to be in a room alone with him; insisting that they meet in public.

She hadn't been the least bit surprised when the address he'd given her had been that seedy bar. It had probably been for the best. The bar had let her keep her distance; keep her exposure to him short.

She lifts her finger from the picture. She isn't the person standing there, she never truly had been. That was another time, and the girl looking back at her was just standing in her place.

In a more symbolic fashion, it was time that she exorcised herself of the demons that life had cast upon her.

Standing, she made her way over to the pricket stand and picked up a wick. Lighting the wick using the flame from another candle, she looks at Matthew's image before her. When he was 15 and innocent. Before he'd spent too much time with her. Before the sins of his friends had come back to haunt him. Before she had made him question everything he had thought he believed in. Before the drugs. Before the rejection. Before the realities of life had slammed into him.

If nothing else, she hopes that he would find the peace that he'd once known, again.

Using the wick she lights the corner of the picture on fire, blinking as another drop of blood collects on the corner, before being engulfed by the growing flame.

She lays the picture between the candles on the stand, watching as it folded and charred.

A white handkerchief appears in her hand, and Emily has to think about when the tears started.

"I hope you were sure about that."

Gently pushing the fabric to her nose, she grimaces. "That person isn't me. She never was. I don't need a picture to remember her."

Rossi nods in understanding, watching as the flames dwindle and die.

Emily lights another candle next to the ashes of the picture, moving the handkerchief away from her face. "What does all of this mean, Dave?"

He inhales deeply, looking around them. "What do you want it to mean? There are hundreds of interpretations and who is anyone to tell you that one is any more or less right than the others?"

They stand there in silence for a few moments; the dread and physical exhaustion that she felt earlier lifting ever so slightly.

"So… where can I drop you? Care for another coffee?"

Emily feels her lips curve in a small smile. "I think I could use something a little stronger than a coffee tonight."

"Ah, Irish coffee, then." Dave replies, as he takes her elbow and turns her toward the exit.

"How did you even know where to find me? Did you follow me here?"

Dave throws a smirk over his shoulder that – on most days – she would have loved to wipe off his face. "I have my ways…"

He opens the door and Emily steps into the vestibule, slightly surprised to be greeted by the smiling face of the priest.

Rossi smiles, shaking his head in light laughter. "You never know, Jimmy, one of these days I might surprise you."

Prentiss watches the exchange in silence.

"Can I count on seeing you both this Sunday, then?"

Emily tenses slightly, almost unconsciously, but she feels Dave's hand give gentle pressure against the small of her back.

"You never know what the future might hold, Jimmy."

Smiling with a bit more ease, Emily lets Dave usher her out of the building. Standing on the steps she watches the snow continue to fall, small flakes sticking to her lashes. "Snow. Everywhere. As far as the eye could reach…"

"He didn't die for you, Emily. If anything, he might have been reborn."

Maybe Matthew had been reborn. Who knew, maybe he wasn't the only one.
nikki8green6, Kelsje and 1 other like this
makintosh Pretty good fanfic!
Celina79 Demonology is my favorite Episode of Season 4! I loved Paget Brewster in that epi, she was brilliant! :) 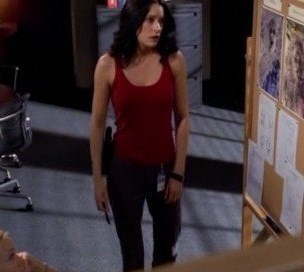 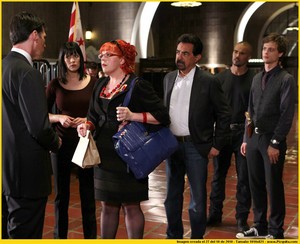 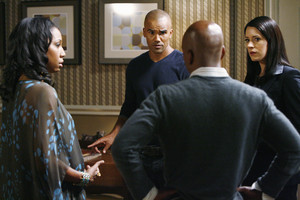 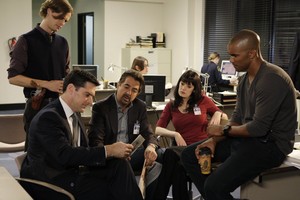 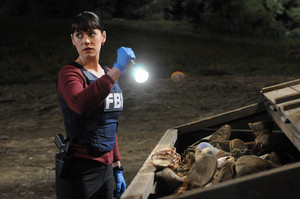 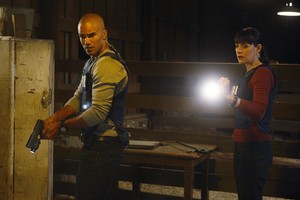 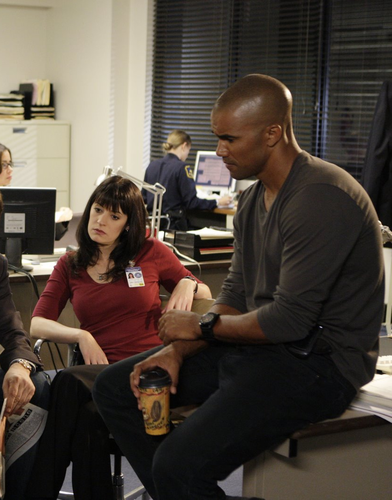 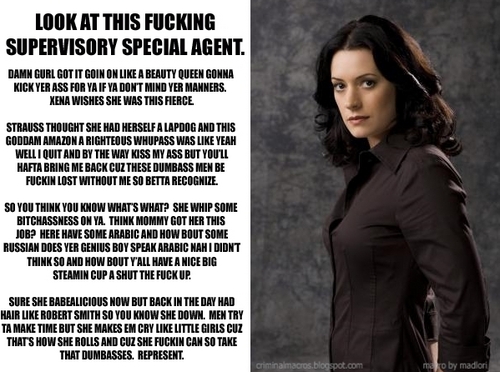 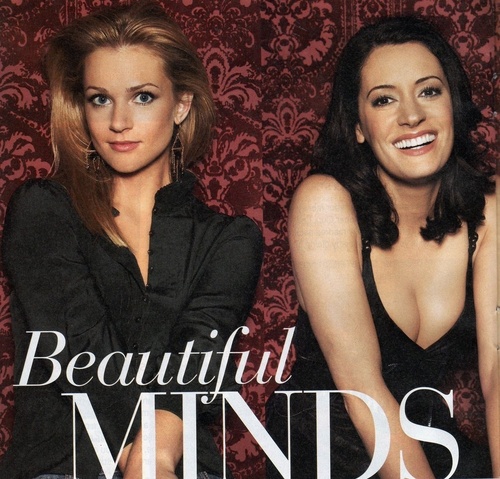 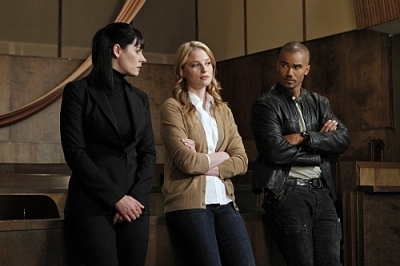 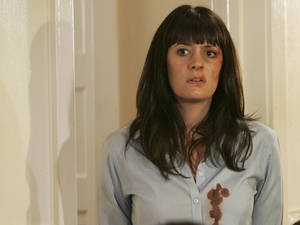 5
Emily Prentiss
added by DoloresFreeman
Source: made by me 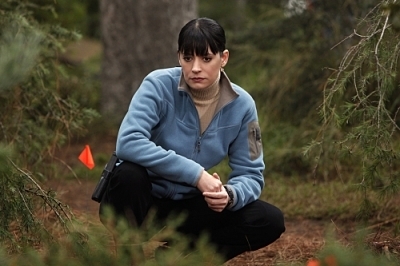 4
Episode Stills - Into the Woods
added by LTboy
Source: paget-brewster.com 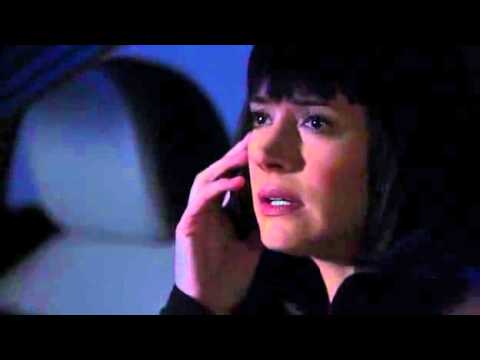