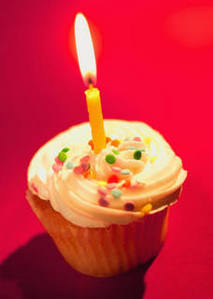 I can't believe it's been a whole year!
Today marks our 1-year anniversary of launching the Fanpop public beta! That's right folks, it was one year ago today that we pressed the button and unveiled Fanpop to the world wide web. And since then, we've had millions and millions of people come to the site. It's been great because we've gotten to know so many of you through the community. Whether it be in a fun forum game like A-Z in Heroes or a heat Picks debate about vanilla vs. chocolate, we've really bonded with our users over the past year.

The site has grown and changed so much in the past year. When we launched our spots we just had links, forums and headlines. Now fans can write soapbox articles, upload videos and embed from almost any video site with thumbnails, create image galleries for icons, fan art, photos and wallpapers, and they can even create interactive polls that we like to call Picks. We had a facelift back in March with a wider layout and more colors. And to help pat all of you on the back and let you encourage one another, we rolled out fan props. We also created a bunch of tools to help you use Fanpop and spread the word like the "Invite a Friend" feature, Picks widget to embed on your MySpace, Xanga, or wherever, and the bookmarklet so you can easily bookmark sites and videos to your spots. It's been a long and crazy year and I want to thank Papa, Michael and Cliff for putting so much of themselves into making all of this happen.

We've really been encouraged by all of your messages and comments to the team. One of the biggest reasons we keep chugging along and working so hard on making Fanpop a great community site is because of your kind words. But what really bowled the team over was link soapbox article titled "link". Not only was it hilarious, but it made us believe that we must be doing something right when cool folks like Amy and other users comment about how much they love the site. I sometimes go back just to read the article and comments again to remind myself that you all are why we get excited about doing what we do each day (and then I grab my box of tissues because I get so choked up!). The community keeps growing and growing each month and if we keep getting users as awesome as the ones we have now (adding images, writing soapbox articles, uploading videos, giving props, starting forum games, etc.), then we're in for another really great year of Fanpopping! Thank you to all of you users who make the site so darn good. 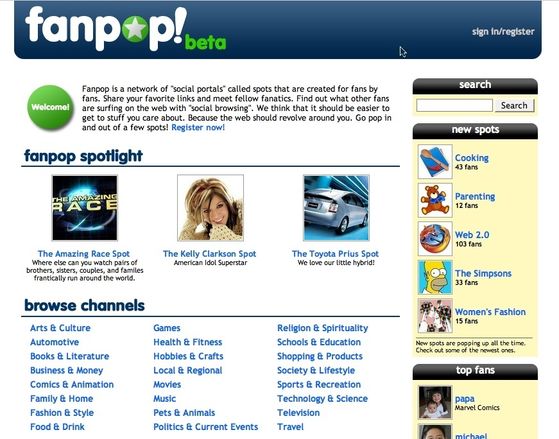 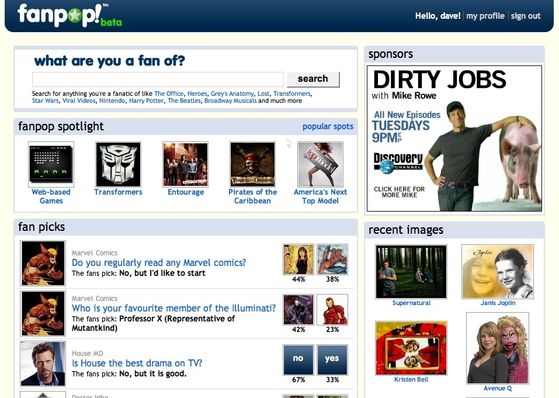 Fanpop circa August 2007
BJsRealm, sarok and 60 others like this
END_OF_DOCUMENT_TOKEN_TO_BE_REPLACED
loading additional comments...
maybeastarbucks I've scheduled a virtual drunken bash.
pip_ku Happy birthday fanpop! :D
brokenbrain Happy birthday Fanpop!!!
harold Hooray!
ciaran Happy Birthday Fanpop Time To Celebrate Weekend Party
ali22 You tell them Papa to get that bubbly out! Congratulations to you all! Happy Birthday Fanpop! :)
TheLostBrotha Happy Birthday Fanpop! Many happy returns haha!!
tvman It's been a long road traveled with a lot more road to go.
rookyboy Happy birthday fanpop, i am sure that it feels like your baby thats growen and is still growing into one of the best dam site's to grace the world wide web and if this was just year 1 then year 2 will be the best thing since the Television lol, happy b day.
johnminh Happy birthday, Fanpop! Congrats to everyone involved in giving us such an awesome community to congregate, hang out and chill in. Break out the bubbly, but don't pour any of it on the servers!
tubby2002 happy birthday fanpop, I love it!
JulieL44 Happy Birthday Fanpop!! Thanks for everything you guys:) All the hard work is greatly appreciated by all of us (I hope!). I love this website so much! My favorite by far! Keep it coming baby!
Snerkie oh wow, well happy birthday Fanpop, i love the comparisson of the '06/'07 and how it still has the same kind of look but a lot more and more fancy ^_^ Now i would like to know where the cake is :)
JT-2JZ Wow it's been a year since I joined Fanpop?! Thanks for the amazing site Dave!
papa Snerkie, not only is newer version of fanpop fancier (look-wise), but when we initially launched we only had the add a link feature, headlines and forums. You could add videos, but they didn't embed (you'd link off to the source site). Since the August 2006 launch we added the soapbox, picks, images, props and made the frontpage a lot more dynamic. It's kind of hard to believe how slim the feature-set a year ago...
AmyFitz Happy Birthday, Fanpop! Aw, wow. I love this site how it is now, I can't believe I didn't find it sooner, it's genius! Love to every one of its members and especially its creators! ^^ xxx
DrDevience Damn fine job ;)
benji I'm eating a cupcake with a candle on, hooray for silly gestures ¬_¬
twix Happy birthday Fanpop it was an awesome year although I joined 3-5 months ago but this site is actually awesome it is so great :)
LisaS Happy Birthday Fanpop! Great site.
cezara Happy B-day Fanpop family!!
benji I'm amazed by how many users (myself included) only joined in 2007, it really must've shot up in popularity around springtime because loads of users joined in March, April and May I notice.
Dominator Happy Birthday!!
looopey3 go fanpop go fanpop go fanpop
hm94991 WOOT attawaytogo, fanpop. u rock! 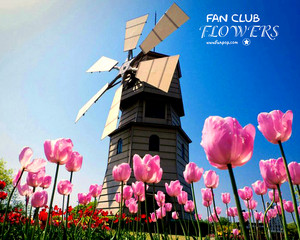 1
fanpop28
added by GALAXYMAX43
3
Fan Pop how to edit stuff
posted by alex165
Alright so this is just for a laugh really, what you change isn't permanent anyway, only you cans ee it and when you refresh everything will change to normal again anyway so it s just for a laugh really so I'm going to teach you how to edit Fanpop clubs for your eyes only, you can have a bit of fun with things you hate or love!

First you will be needing:

Go to the club you want to edit (or maybe even someones profile, or yours)

Right click on something you want to change (For example, the fan count) and click Inspect Element...

Then edit it and press enter or f10 to save it

You can do this with pretty much anything (see my example) 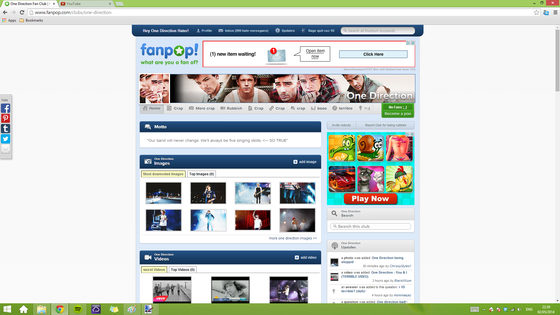 This section of my Fanpop User Guide describes how to create a club on Fanpop, and was last substantively edited on 4 June 2013.

Covered in this article:
Determining need
Creating a club

Determining need
So, you are a fan of some topic and want to post a bunch of links for it, right? Before you create a club for it, you need to make sure that there isn't already a club that covers that territory. Duplicate clubs get reported and may eventually be removed from the site, so this is important: always perform a thorough search for your topic before you create a new club!

At least two searches should...
continue reading...
22
IM and Chat are Back!
posted by Fanpop
This is a quick guide to using the new IM and Chat beta launch.

Rooms Tab:
The global-chat is open to all registered fans.

There is another room that is reserved for users of a certain level, and you'll also see that in the Rooms tab. In the past, we've had a few random people come in and hit on the people in the chat rooms, so the reserved room should be relatively free of such riff-raff.

Contacts are your mutual...
continue reading... 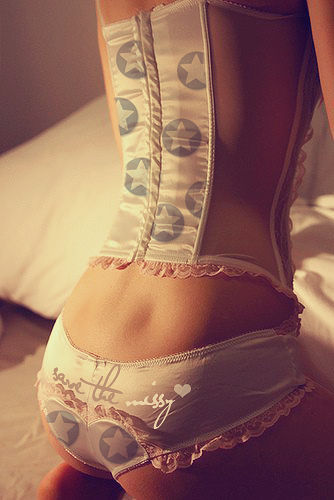 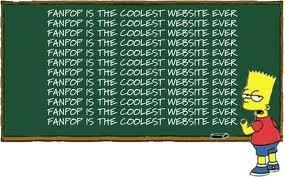 20
Fanpop Tab Icons (?)
added by dazl
Source: Me, I guess
81
Pros and Cons (and Questions) About the New Rating System
posted by Cinders
To like or not to like? That is the question.

Dave gave a very good, logical explanation for the change to help assuage some fears and answer some questions:

Thanks for making this pick. There are a lot of reasons we wanted to create a new system for deciding whether fans like something or not. We found that most people were rating either 4 or 5 stars so we thought...
continue reading...
103
how to and how not to advertise your spot
posted by amazondebs
okay straight down to buisness, frankly I dislike picks saying "will you join this spot" or messages from people advertising sites and spots. If people have a real interest in the spot they will find it themselves, same goes for websites but i understand that there's no point to a spot if your the only member and you have no one to talk about your passion with and since we're all one big fanpop family the more of us the merrier a spot generally is, so rather than whining about it i have decided to offer up some solutions. Although the annoying person with in me still feels the need to put in...
continue reading...
22
A Little Word Poem
posted by Temptasia

Here is a little poem (if you can call it that) that I wrote about fanpop. Believe it or not this actually took a long time. It is really difficult to find words that start with P. Let me know if you guys come up with anything better :) Ok Dave, Papa, Cliff, and Michael this one's for you! 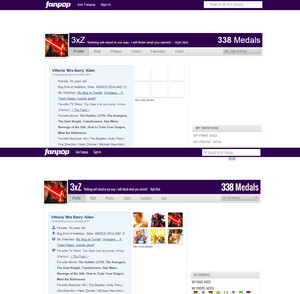 3
Yay! Fanpop changed the font to be rounder and cuter! ...only seen by me for 33 seconds (or less)
added by 3xZ
Source: 3xZ

Happy Birthday!
added by ShiningsTar542
Source: Me.
29
How not to get banned for life, and how to punish trolls
posted by Fanpop
99% of you are amazing fans! This is a guide on dealing with the 1%.

1. REPORT ATTACKERS IMMEDIATELY. You are doing the entire community a favor as they are probably attacking other members.

YOU MUST PROVIDE AS MUCH EVIDENCE AS POSSIBLE IN THE REPORT FIELD, including links to the attacks.

Attacks are personal insults, threats, bigotry, etc. A person saying they don't like a contribution is NOT an attack. Having a debate is also not an attack until insults/threats etc. are mixed in.

2. IGNORE THEM. DO NOT RESPOND BACK. If you attack back, you are probably giving the attacker/troll...
continue reading... 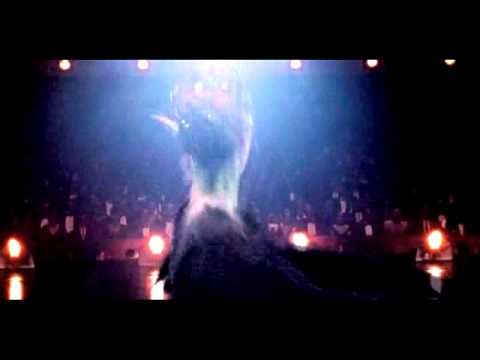