2
Changes chp. 4
posted by stlouisfan
Even though he had been in the crate for just an hour, it had felt more like ten hours for Dave. All he could do was sit there and wait for something to happen. What would happen? Dave didn't know. He didn't know what would come up. Despite his crate situation Dave could only think of one thing and that was of his sister. Would he ever see her again and would ever get to meet his future niece or nephew? But above all the only big question he had was whether or not he or his sister would ever be human again.

Dave was starting to doze when he heard some voices coming from outside the crate. Could that be his salvation? Could that be a way out of this horrid crate?

Outside of the crate stood all four penguins, plus Marlene. They all stared at the crate until Marlene decided to break the silence.

"What kind of animal do you think is inside?" she asked Skipper.

Skipper did not take his eyes off the crate but he did answer her question.

"That's what we're here to find out Marlene," Skipper said.

From inside the crate a voice started yelling out.

"Hey who's out there? Somebody get me the hell out this crate. Come on it's getting cramped and it's hot in here," said the voice.

Private looked at the crate with his eyes full of fear.

"Um Skippa maybe we shouldn't let him out. He sounds mean," Private said with a whimper.

From inside the crate Dave could hear the fear in Private's voice and let out a sigh.

"Look kid I'm sorry about the attitude okay. I'm just in a horrible mood right now and I'm in a horrible situation alright. Now will someone please let me out? I'm tired of being stuck in this lousy crate," Dave said apologeticaly.

Skipper turned his head to Rico and nodded. Rico then upchucked a crowbar and handed it to Skipper who then proceeded to stick the end of the crowbar into the side of the crate and pried the front of it off.

Inside the crate was a male otter with dark brown fur and deep green eyes. They looked at him and he walked towards them.

"Thank god man. It sucked being stuck in that crate for however long I was in there," Dave said.

Dave walked towards the penguins and Marlene and felt a strange feeling go through him. These were the first animals he had seen since he had turned. During his entire stay at Hoboken he had only seen himself and his sister and now that he was talking to other animals everything just felt weird. But after the feeling passed he continued towards the group. As he held out his paw to meet them, each penguin went into their battle stances and stared him down. No one talked, they just stared.

"Who are you and what is your business here?" Skipper finally asked.

"What are you talking about man?" Dave asked.

Dave continued to stare in confusion and said, "I don't understand what you're going on about. You're only confusing me."

Skipper let out a sigh and said, "Look we can either do it the easy way or we can do it the hard way. Rico?"

Skipper turned his head to Rico who now held the crowbar and was laughing manically.

Marlene stepped in front of the penguins and stood before Dave.

"Ignore them, they're just paranoid," she told Dave.

Marlene then grabbed Dave's paw, shook it, and introduced herself.

Dave pulled his paw from Marlene and said, "Dave. My name is Dave."

Private dropped his stance and waddled towards Dave.

"Hello Dave, I'm Private and these a-" Private started, but was cut off when Skipper slapped Private on the back of the head.

"Private that is confidential information. Information we do not give to spies. Now go keep an eye out for Alice," Skipper scolded Private and pointed at the door to the garage.

Private dropped his head in shame and waddled to the door. Marlene rolled her eyes and pointed at each penguin respectivaly.

"Marlene you just blew our secret info," Skipper yelled at her.

"Hey he was going to learn it sometime," Marlene said to Skipper with a smirk on her face.

Before anyone could continue the conversation, a more annoying and obnoxious voice piped in.

"What is this, a new neighbor? Oh, that means I get a new subject."

The penguins along with Marlene and Dave turned their heads to the window which was open. There on the window sill was the annoying ring tailed lemur king himself, King Julien. Julien jumped down from the window and approached Dave and examined him.

"What is this? A new otter? Oh well, I am King Julien and I am king of this zoo. You may now bask in the excellence that is me," Julien said.

Once again Dave was completely confused. Who was this lemur and where did he suddenly come from? Dave glanced back at the penguins and Marlene. They were all shaking their heads. Obviously this so called king was just being full of himself.

Dave turned back to Julien and calmly said, "Look buddy I know you seem to think that you're the one in charge here and in your habitat and you probably are, but out here in this garage you aren't in charge. So please leave me alone and do not talk to me unless I talk to you."

Julien looked back at Dave and asked. "I'm sorry I do not follow. What are you saying?"

Dave groaned and said, "It means get out of my face or I will hurt you."

Now Dave's words got Julien to back away.

"O.K. fine, but remember I can either be a friend or not a friend. I forget what the opposite are called," Julien warned before jumping back out the window.

Dave looked back at the penguins and Marlene and said, "I think I'm going to hate him."

Skipper gazed back at Dave.

"Now that Ringtail is gone we can get back to business. Now tell me who are you?" Skipper demonded.

Dave looked back and said, "I already told you that my name is Dave."

Skipper nodded and asked his next question.

"What brings you to our zoo Dave?" Skipper asked next.

Dave thought for a moment on what he should say and then gave an answer.

"I was transferred here against my will. Do you treat all your new neighbors like this?" Dave asked.

Kowalski answered Dave's question by saying, "Just the ones from Hoboken, we've had a lot of bad luck with. One of them was a boa constrictor with a big appetite."

Before Skipper could ask any more questions Private came running back to the group.

Skipper nodded at Private and pushed Dave back into the crate. Before Dave could say anything Skipper told him what was going on.

"If Alice finds you outside this crate she will get suspicious which would be bad news for us. Just remember, you never saw us," Skipper said to Dave.

Skipper started waving his flippers in front of Dave's face. Once again this just confused Dave. The penguins closed the crate with Dave back inside and hid in various locations of the garage along with Marlene.

Alice entered the garage wheeling in a dolly. She walked over to the crate and using the dolly was able to easily lift it up and wheel it out of the garage.

After Alice had left, the penguins and Marlene came out of hiding and watched Alice walk away with the crate.

Skipper turned to the others and said, "Alright I want all of you to keep an eye him. Especially you Marlene seeing as he is likely going to be your new roommate. Keep your guard up because I still don't trust this guy."

Marlene looked back at Skipper and said, "Come on Skipper. He's new and he seems friendly for the most part. Can't you just give up this paranoia for once?" 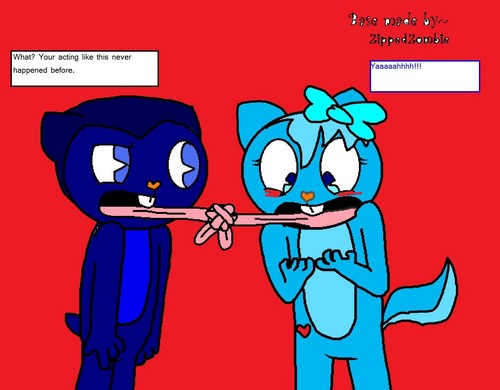 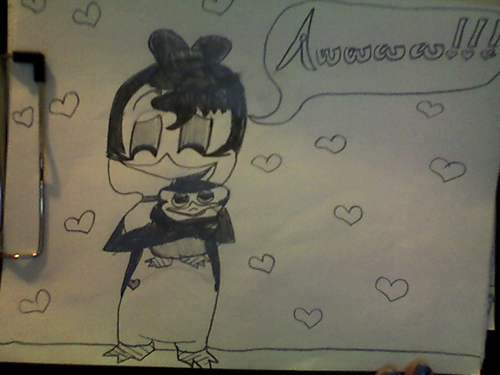 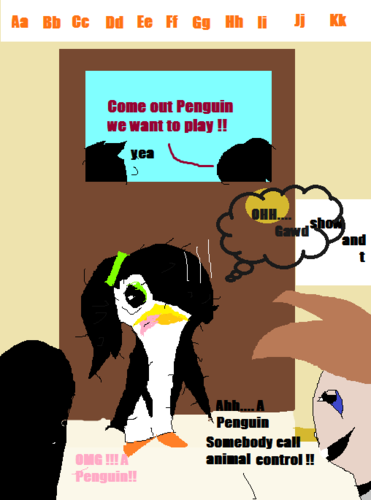 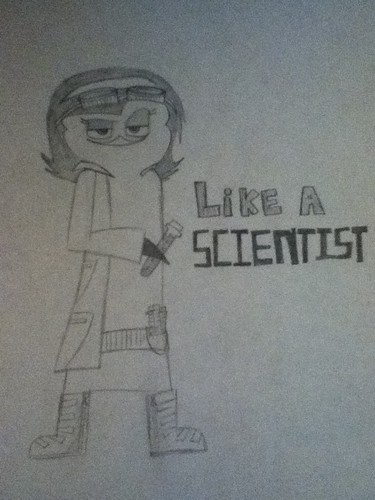 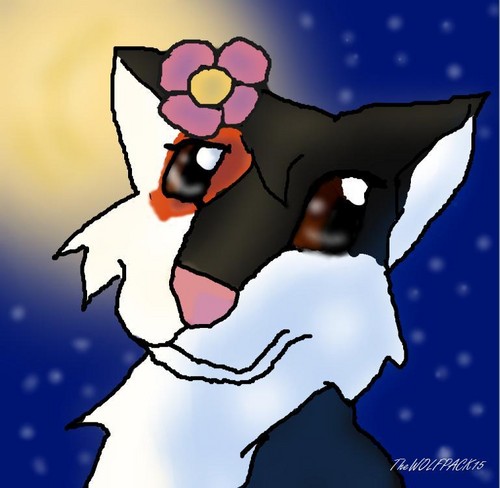 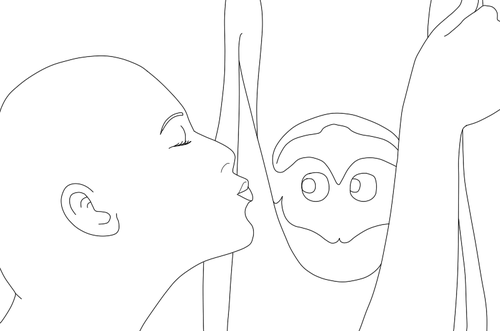 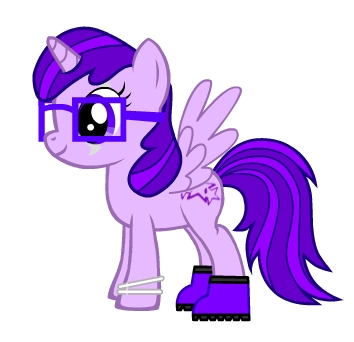 Catherine is a Little Pony
added by Katie_Kat200
Source: Me! And Pony Creator on dA 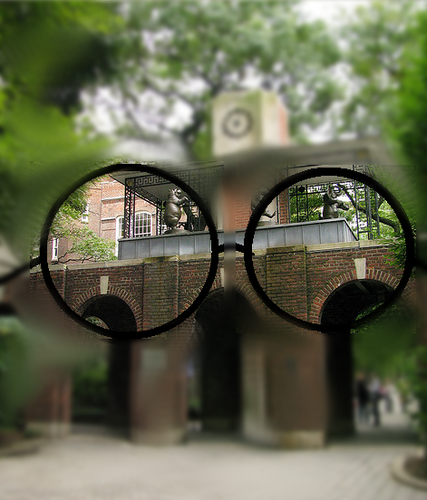 Hopeful Fanguin Publicity
added by mostar1219
Okay, so this is a video involving the Fine Bros and at one point, they give a shout out to the fanguins (whom they've just found out about). Enjoy
video
finebros
shout out
fine time
fanguins
pom
publicity
madagascar
pom and autism 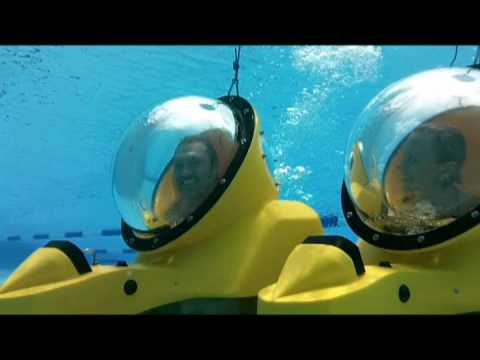 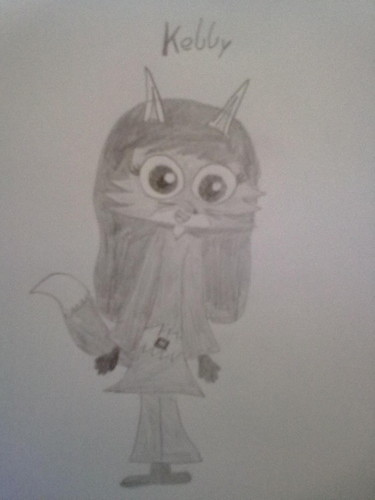 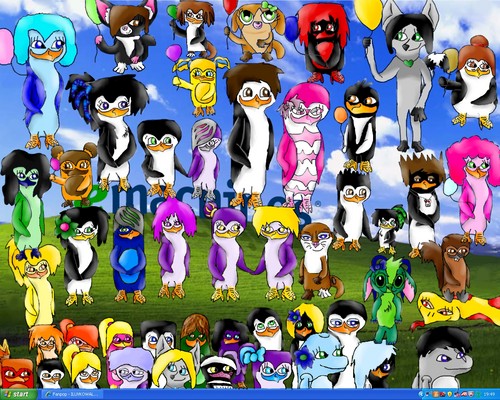 1
My desktop picture on my computer. :P
added by ILUVKOWALSKI
Source: Me. :3 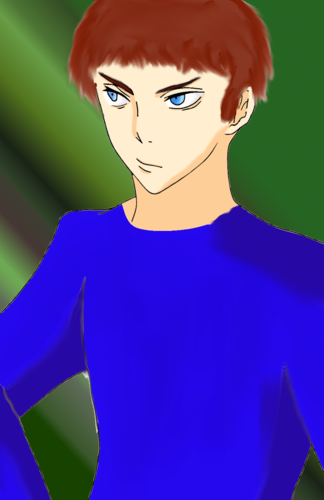 Gary Summer (Base Used)
added by Tressa-pom
Source: Base Used 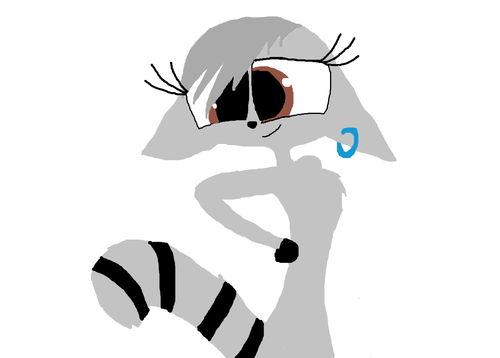 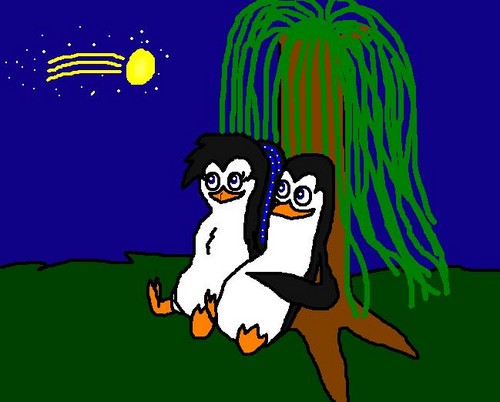 3
Emma's Request
added by iloveprivate
Source: iloveprivate
1
Last Mile of the Way: Chapter 1
posted by ILUVKOWALSKI
(Okay, so this is the fanfic I'm basing on the Alaska adventure RP, I can't remember the exact date Kait started it on the Fans of Pom wall, so I'm just gonna put the date at the 9th of January. :P I am gonna cut out a few things that were at the start, ie Victoria licking the cookie, and the fight between Kait and Catlin, because Catlin and Vic didn't actually go onto the RP on the forum, and because some of it was very confusing. :P I haven't wrote other people's Ocs in stories before, so forgive me if I don't write your Oc entirely in character. D: Oh and there is gonna be a little bit of...
continue reading... 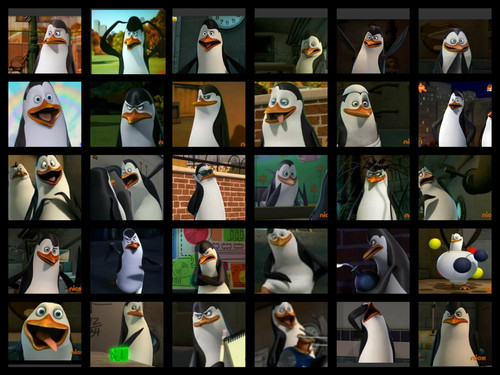 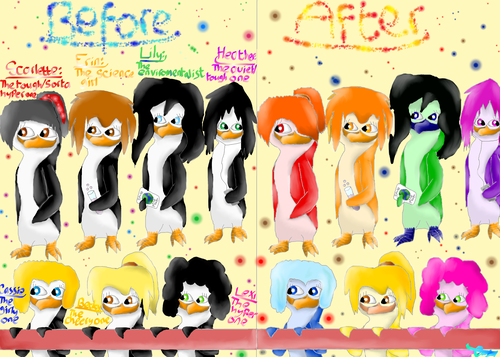