2
Gender stereotypes in movies, tv shows, and other media
posted by buttercupthePPG
Have you ever been offended by those stereotypes? Well, I get offended pretty easily by the gender stereotypes. Whenever I get offended I would complain and stop watching or playing the game altogether. Nearly all movies and tv shows and even the video games are made by sexist men who think that women are not as capable as women! Let's look at one example, the movie Gremlins. It may be funny, but can be sexist. I hate that movie. It portrays women as weak, cowardly, helpless, and over FUCKING dependent! And males as too overprotective and muscly and too fucking irresistable! Gosh, I hate when the movies like this one portrays women like that. Why the fuck does all the movies fail the bechdel test?! Well, that is a good question I asked myself. The term bechdel came from a feminist comic person. 1. it must have at least two or more women in it.
2. do they talk to each other?
3. and if they do, does the conversation involve something besides a man?
The same goes for many, many books. None of the books passed, and one of them is which I read. Let's look at this example, Julio and Romiette- it views women as defenseless, damsel in distress, and it is very fucked up. Romiette is an example of a friggin damsel-in-distress stereotype! Fuck that book, too......... In that book the sexist male had to save his damsel! UGGH, how offensive! Even the plays don't pass. I am a woman, and I am nothing like that! I am an aggressive tomboy that knows self defense, and I am very independent. I am also brave, and never needed any help. Men have never gotten into the dude-in-distress position because they are greatly more valued! WHAT, DID HOLLYWOOD STILL LIVE IN THE 1700S AND THE FRICKING 1800S?! I would not want to be an actress unless they have a movie about a strong woman, a movie that passes the bechdel test, and a movie without any overprotective, stalkerish males. The movie, Gremlins, I believe, has a lot of sexist jokes hidden too.

Ok let's go back to the topic- in movies and tv and other media that didn't pass the bechdel test, women are portrayed as weak, helpless, unintelligent, neurotic, and cowardly housewifes, and men as hardworking, overprotective, strong, tall, and brave. The little girls in these tv shows and movies and other media seem to follow the role of the future damsel in distress, and the little boys seem to be protective and they have a love for sports. I hate movies, tv shows, and other media that didn't pass. Sometimes it feels as if the main-character roles is a no girls allowed club because of that. Hollywood needs to remember that women don't always need protection and that men can be very weak and cowardly too! Hollywood, at least make a movie about a strong woman who has to save a weak man!

Let's look at video games- they are way too male dominated, and feature women as damsels and the men as invincible heroes. Yeah, too many dicks in vid games.... Only 1 in 99,000 games has a strong female role- all other roles in other games are male dominated. Women who were damsels are sometimes unrealistically sexualized, and men are portrayed as way too muscly and big. We don't look like that in real life, anyways. Most of the damsels could be sisters, princesses, queens, and all other "important" females. I find the stereotypes to be super sexist. Even vid games do not pass the bechdel test because the world is still sexist towards women. And the gender stereotypes can be evident in cooking games designed for girls. Can't there be a game or other media where a male is portrayed as nurturing and a female is portrayed as protective and tough?

Most ads are sexist except job ones- well most of the time. When you see an ad, it normally features a woman as ditzy, helpless, unintelligent, nurturing, and all other things possibly related to female gender stereotypes. Males are typlically portrayed as overprotective and too athletic, and all other things related to male stereotypes. Women are here to change the world, not be pretty and sexy and be protected by men!
SelinaKyle and WinxClub_Stella like this
TBUGoth I agree with you. Here's why: My Dad died, setting off a chain of events that didn't seem to match any of the "dead Dad" stories in movies, TV shows, and other media. Not even my favorite novel "The Phantom of the Opera" where the women saves two men, matched my own "dead Dad" story. Thus I felt alone. Then I saw "Saving Mr. Banks" six years after my Dad died, and it matched my "dead Dad" story almost exactly! Finally Hollywood had used it's right to freedom of expression to include a women like me, and now everyone will understand what I went though when I reference "Saving Mr, Banks" I am not alone anymore! If you view enough media, I am POSITIVE you find a woman like YOU too. 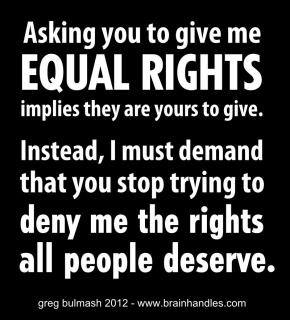 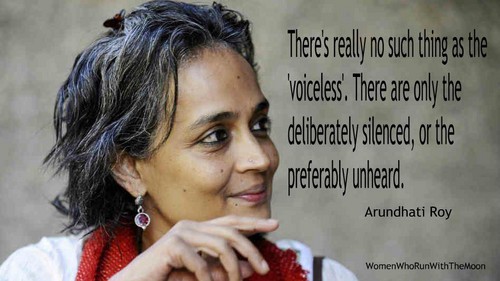 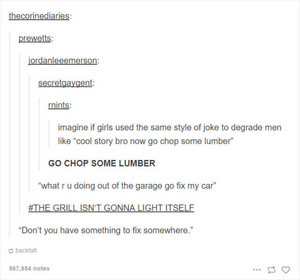 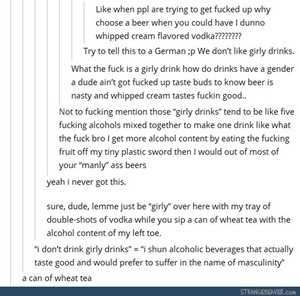 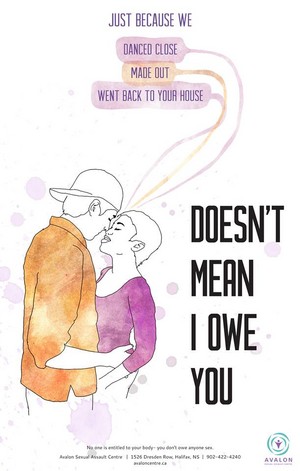 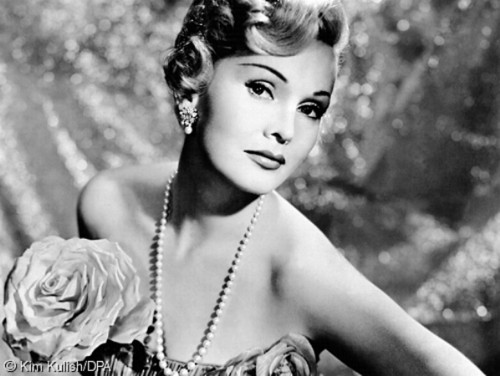 5
Zsa Zsa Gabor
added by xXxDracoxXx
4
Anti-Feminism at it's finest: A bunch of hilariously stupid Anti-Feminist quotes
posted by KateKicksAss 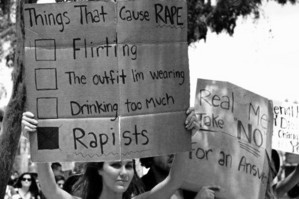 "I’ve been having an argument for days with this guy on IMDB about promiscuous people not asking for rape (on the cape fear page) and he’s like said some pretty ridiculous sh*t…here are some examples:

“Hence I don’t agree with the whole martial rape. The newest law in Afghanistan that obliges women to give their husbands sex at least 4 times a week. I would say that is a progressive law.”

“Understand this, rape will always exist in human society. It is a bitter fruit of evolution....
continue reading... 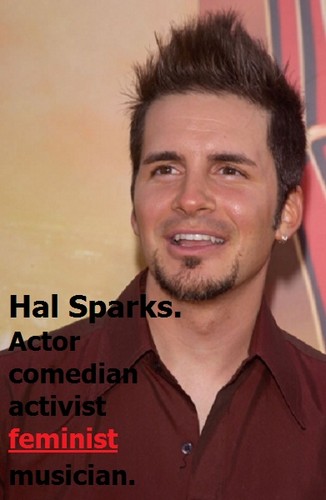 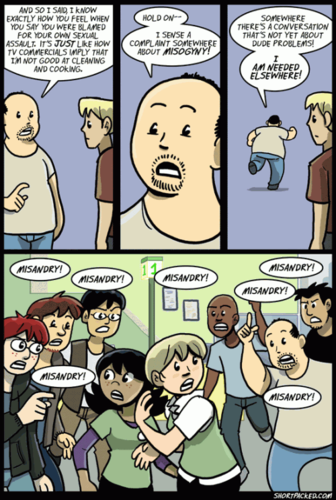 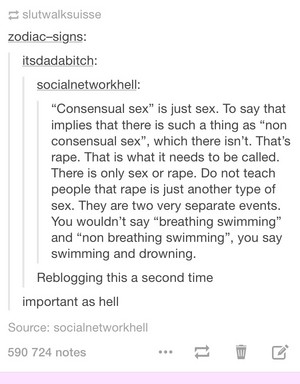 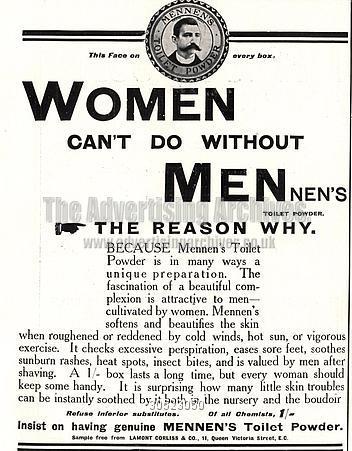 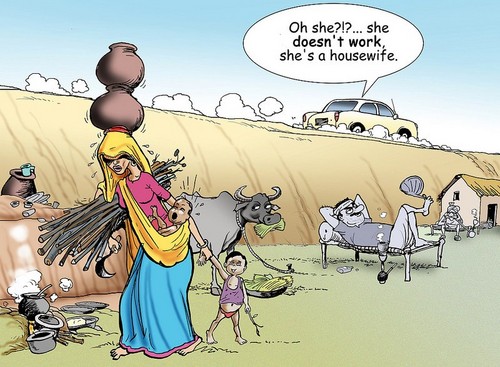 1
She Doesn't Work, She's A Housewife
added by SelinaKyle 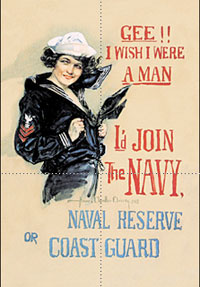 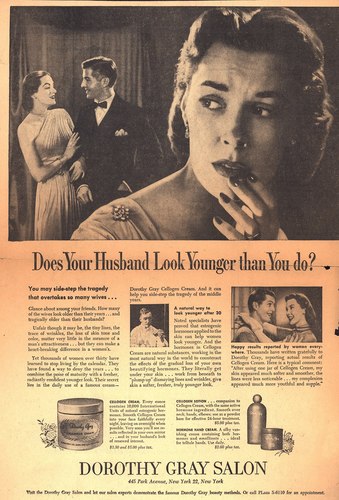 Sexist Ads
added by Vixie79
Source: google images
Am i anti-feminist?
posted by Kitbeast
Now i'm what I would like to call an average guy. I also like to think that I'm open minded and willing to hear any argument as long as that argument is backed up with cold hard facts.
Now as a guy i personally don't have any experience of any of the issues normally expressed by the feminist movement so my thoughts and opinions are always formed from second hand or third hand experience (reading articles, watching YouTube videos etc.)
Now i'm sure some of you are asking yourself why are you asking this? Well the answer is as follows.
Two week ago i was taking part in a community discussion at...
continue reading... 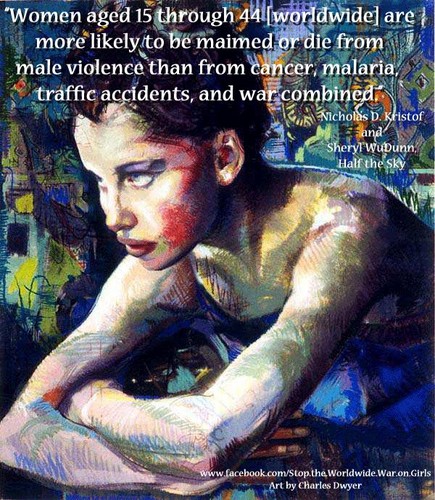 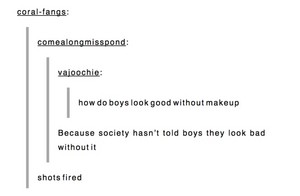