The Fall of Robotnik: part two
posted by whiteclaw

Stronger together
I miss the feeling of wind on my face, as I ran through the city and the many diffrent regions of mobius. Ah that`s the way to live on this big green planet of ours. But alas, I rest on a couch in the lobby of a five diamond resort. Planning where I`ll go next. Knuckles waits at the front desk with his backpack on the floor and a douffle bag on his shoulder. He carried that heavy backpack like it was nothing, out of all three of us he is obviously the strongest. Tails my lil bro, is the smartest. With his Twin tails he can fly to places I can`t reach sometimes. And he is the one who is bullied most out of everyone I know. It`s sad to see him get abused so much I wish I could step in and help. But every time I do I just end up failing.

I wish I could help not just Tails, but ALL my freinds who need me. Except for Knuckles heh heh. "We are on the eleventh floor" Tails says to me, "So come see us in room 206 okay Sonic?" I nodded my head. He handed me a keycard with the room number on it and the name of the hotel on the back. I just opened the door when I hear "Sonic The Hedgehog!!!" I whirl around and see a burly green hedgehog wearing a black leather jacket and sunglasses. "You are buddies with an ill-tempered Echidna and a two tailed freak right?" I try and ignore him but he grabs me by the shoulder and pulls me toward himI break free and hepulls out a knife and stabs me in my upper arm. I scream and Knuckles and Tails come running outside and Knuckles Sucker punches him as hard as he can.


He responds with a roundhouse to the face, "My father trained me better than that!" And he hit the green guy with a backhand to the face. He must of broke his nose cause I heard something crack. Tails removed the knife from my upper-arm and wrapped a bandage around my arm. I stood up and grabbed the knife from Tails. The green hedge hog pulled out a .45 cal and shot at Tails. I threw him out of the way and dodged the bullet. The gunshot startled the police and they tasered him in the back, they ran up to him and put handcuffs on him. I asked what his name was, he spat blood in my face.

Looks like I made enemies quicker than I thought. 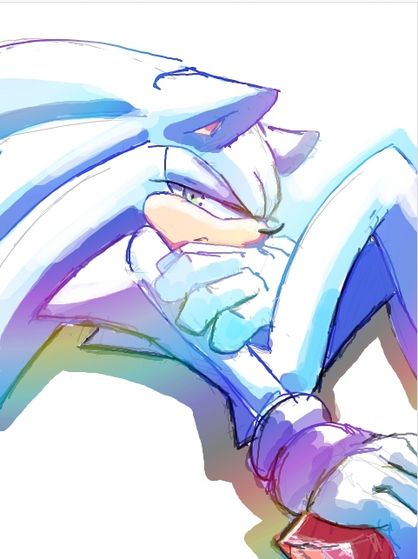 The fall of Robitnik: Part one
posted by whiteclaw 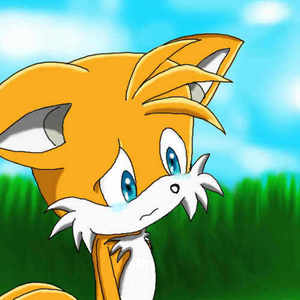 wars never end do they?
I remember it like it was yesterday, the fall breeze blowing through the maroon colored trees. The sight of people rushing to their jobs in the city, and the dirty people making drug deals in the alleys behind my apartment building. It`s great living it up in the ghetto isn`t it? My name is Mighty The Armadillo, and I am a member of the unstopable chaotix. And sadly against orders have fallen into the world of crime. Right now I`m going to do something that shall haunt me for the rest of my life time. I walked across the street to a gang of thugs who looked dangerous.


So I drew my newly polished...
continue reading... 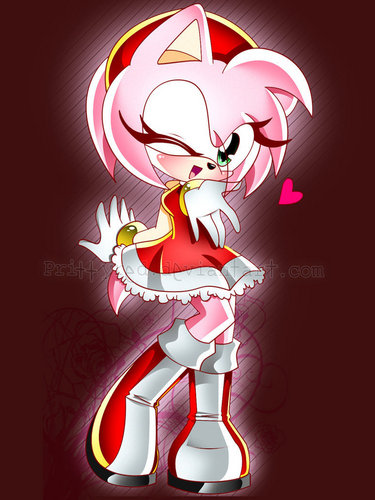 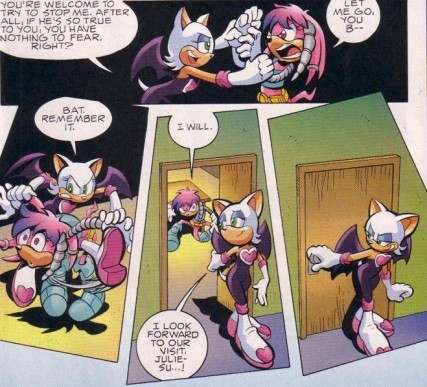 Julie and Rouge fighting over Knuckles
added by musiclover2015 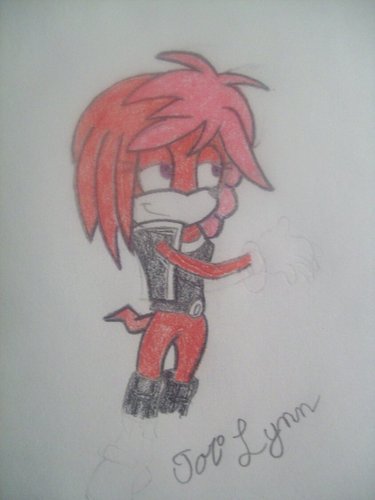 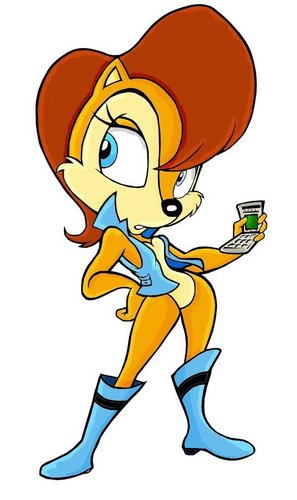 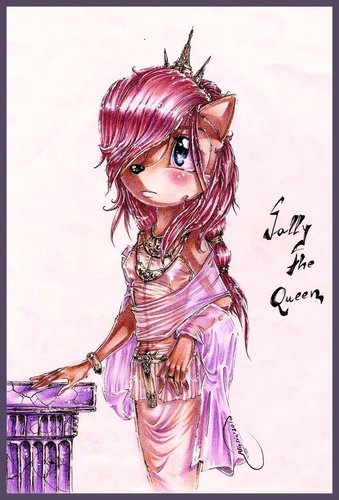 Sally the Queen
added by musiclover2015
Source: by ~AllesiaTheHedge 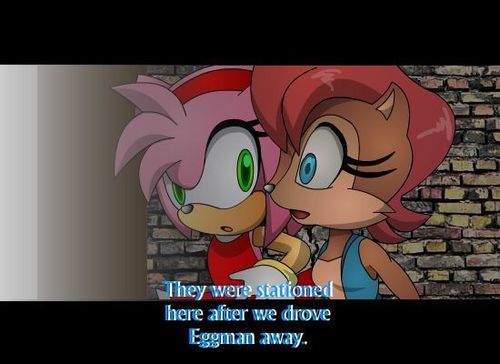 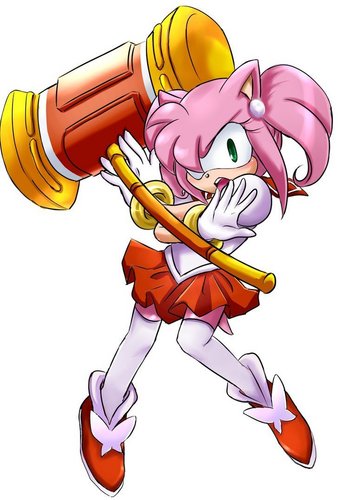 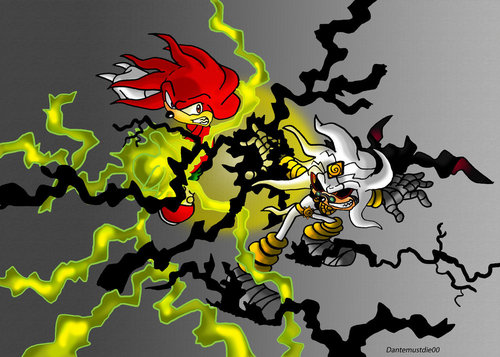 1
Echoes of the Past
added by musiclover2015
Source: by ~Dantemustdie00 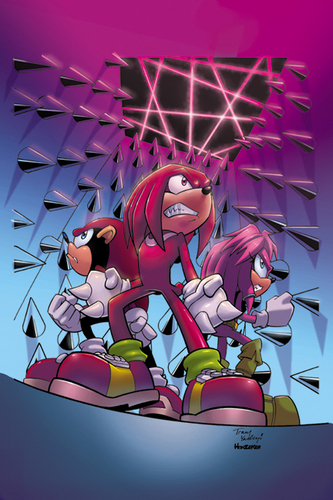 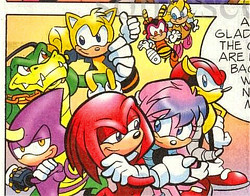 Chaotix
The Chaotix is a group of Mobians which act as Knuckles the Echidna's assistance as Guardian of Angel Island. The group was originally formed when Knuckles required help in defeating Metal Sonic, after the Knothole Freedom Fighters were all captured. All of its members are close friends with Knuckles, or else with a member who is a close friend of Knuckles', and one of them, Julie-Su, is dating him. The Chaotix have resided part time in both Knothole and New Mobotropolis, helping the Kingdom of Acorn battle the Eggman Empire and other threats. Since the death of Locke, they have split their...
continue reading... 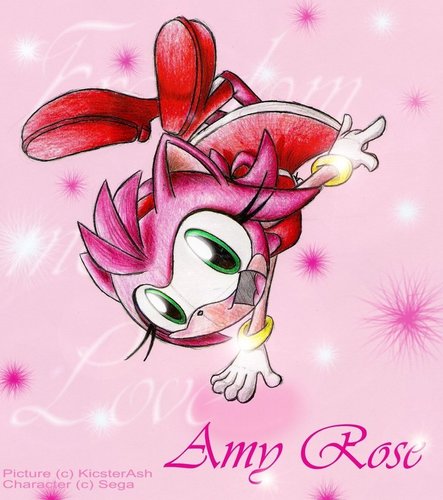 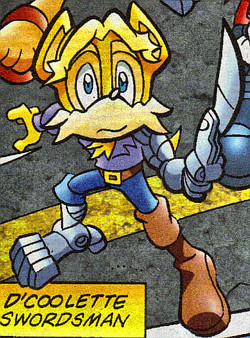 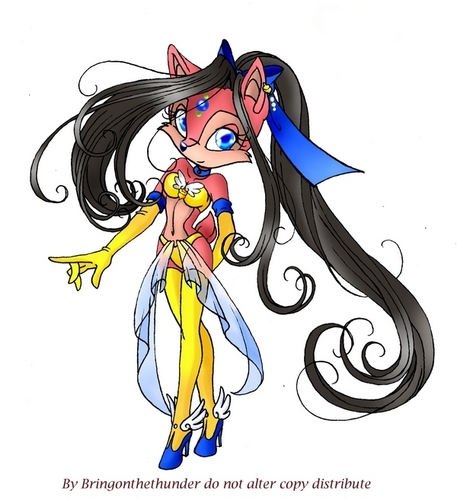 1
The Golden Acorn
added by musiclover2015
Source: by *kiss-the-thunder 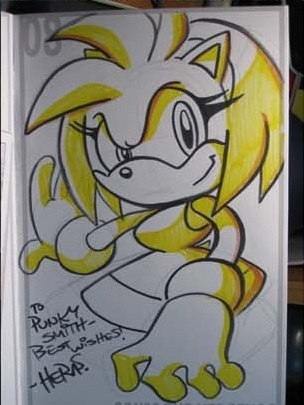