UH-OH, FREDDIE’S IN TROUBLE! IT SEEMS THE SCREEN BABE HAS BROKEN HIS PACT WITH BRIDE TO BE SARAH MICHELLE GELLAR. HOW? WELL, THE PAIR AGREED NOT TO DISCUSS THEIR INTIMATE LOVE AFFAIR-BUT FREDDIE JUST COULDN’T KEEP QUIET. AND, MAN, IS THIS JUICY STUFF!


“After years of feeling like an outsider, I finally have a woman I love, and friends that I can trust. I am the luckiest man in the world to have met Sarah.” So says Freddie Prinze Jr, and actor who has overcome an enormously unhappy childhood to become one of the Hollywood’s hottest rising stars. “Now the only thing I want out of life is to be a father!” says Freddie, 25, who proposed to Sarah, 24, in April (although their actual wedding date is still under wraps).

I’ll be the best father you’ll ever see in your life. And Sarah will be a fantastic mother too,” says the actor, whose in father committed suicide when he was just 10 months old. “I had a happy, normal childhood until one day I realized I didn’t have a regular family.”

Freddie was raised in New Mexico by his mother, estate agent Katherine Cochrane-Prinze, and maternal grandparents, after his father, US sitcom star Freddie Prinze, shot himself while intoxicated with sedatives at age 22. “It was until I turned eight that I started to get really angry, because everyone had a father and I didn’t.” The details of his father’s death made it even harder to cope. “Everybody else knew what happened to my dad, but nobody wanted to tell me. One day this kid Justin got me mad and I said something to him. I can still remember the moment, when he turned round to me and said, ‘Oh yeah? Well my dad told me you dad was a junkie and shot himself!” I looked him dead in the face and he said it in the face, and he said it again. I simply didn’t believe him, and I went running inside and talked to my mum, who started crying.”

Freddie only then learned the full story surrounding his father’s death. “Until then, my mum had shielded me from the truth. I thought my dad had died because of an overdose of prescription pills. I’ve never done drugs and the occasional glass of wine with dinner is the extent of my liquor consumption. After finally learning the truth, I hated my dad for what he’d done. I felt like I didn’t get a chance to be a son. If only he’d known how great a son I could have been, there’s no way he’s have done that!"

“The knowledge of what my father had done made me feel isolated, and I became and outsider who got into fights at school and didn’t pay attention to class. Everyone thought I was on drugs, or gay, or just really strange. I was strange. I watched cartoon, read comic books and played video games. I didn’t play sports. I didn’t fit in so I got picked on. It was misery for me, so I only went to school to write tests or to hand in assignments.”

And his romantic life wasn’t much better. “I’ve kissed more girls in movies than I ever did in real life. I didn’t have a girlfriend until I was seventeen. I was so infatuated, but her feelings for me were very short lived.”

Through child psychologists and group therapists, Freddie learned to cope with his grief, but it’s only through his belief in God-and his love for Sarah-that he feels he can finally face the truth.

Going on to describe his religious awakening five years earlier, he remembers: “One day I felt the hand of God. I had started doubting and questioning what I was doing wit my life.” By then, Freddie has chosen to follow his father’s footsteps to Hollywood, although he was wracked with doubts as to whether he’s made the right decision-especially after two years passed with very little work.

“I would periodically plunge into bouts of depression. My greatest fear was ending up like my father. But miraculously, my epiphany came as I was sitting in my cay. I suddenly started crying-big, heavy, aching sobs. It was terrifying.”

“I felt this huge weight that was just crushing me. I looked into the rear vision and saw my own eyes and suddenly everything was cool. I knew I wasn’t going to end up like my dad. It was as if God said,’ You don’t need to worry anymore’ and from then on everything went into place.”

Freddie went on star opposite Michelle Pfeiffer in To Gillian on her 37th birthday, The house of yes, and the teen hit, I know what you did last summer, where he first met his future bride, Sarah Michelle Gellar, in 1997. Both were involved with other people at the time so, it wasn’t until 2 years later that the couple began dating. “I had been dating actress Kimberly McCullough (from day time soap General Hospital) for four years, and thought we would marry. I’ve always enjoyed the security of relationships and never craved the crazy Hollywood bachelor lifestyles.”

But that would all change. “Sarah is my destiny, I care about her so much, we became friends when we made I know what you did last summer, and remained friends. And now she’s my very best friend.”

As well as their love for each other, Freddie and Sarah share hobbies and interests- the coupe regularly attend martial arts and tap-dancing classes. “I think Sarah is going to be the biggest movie star in the world. She is amazing, and talented and other people will tell you the same thing. I love her.”

So the question is, when’s the big day? “Sarah and I want our wedding to be a private affair- the most important day of our loves, I would never un a million years tell you the date, We are engaged. We will be married. You’ll know it after it happens!”

Today the blissfully happy couple love in a 3 million five-bedroom home in the Hollywood hills, planning their big trip up the aisle and, shortly after planning to fill their spare rooms with babies.

“With me and Sarah, everyday is like Valentine’s Day. I’ve always felt that Valentines day is kind of a crock coz, in my opinion, I believe a man should make his girl special everyday of the year. I’m a big believer in surprises. You’ve got to be romantic all of the time.”

That shouldn’t be hard for Freddie, who has enough money to made grand romantic gestures. He took home a 2 million-pay cheque for his latest film, the romance Summer Catch. Thankful for his blessings, Freddie reveals how he prays everyday. In church? “No, in the shower!” he confesses, bursting out laughing. “Honestly, I get in the shower every single day, get on my hands and kneed and pray. I feel the need to thank God for everything. I don’t want to mess up like my father did. But in a way, my dad taught me the greatest lesson in life and that’s to make sure the people around you feel loved. That’s something he might not have been able to teach me if he were alive. So I owe him one.”

If anything, Freddie has learned to veer his lifestyle away from the one that killed his father. ”Drugs are the sucker’s way, and I’m not a sucker. I don’t smoke, do drugs and hardly even drink, but there’s still a fear- what if it’s genetic? So I don’t do drugs but I’m high everyday. I’m playing cowboys and Indians and getting paid to do it. I’m the happiest guy on Earth. It’s so great to find something and someone that you can completely embrace and love.” Says the six-foot hunk, whose fiancée refers to him affectionately as “Pie”.

And there is very little Freddie wouldn’t do to please his future wife-even agreeing wit her request not to strip naked during a love scene in Summer Catch. Having persuaded the director to supply a bottom double for his bare backsided romp, he boasts, “Nobody is going to see my butt besides Sarah.” 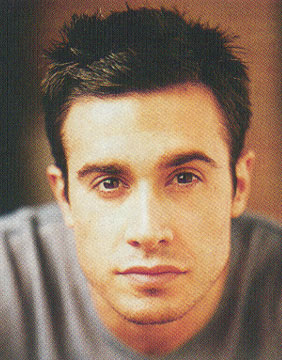 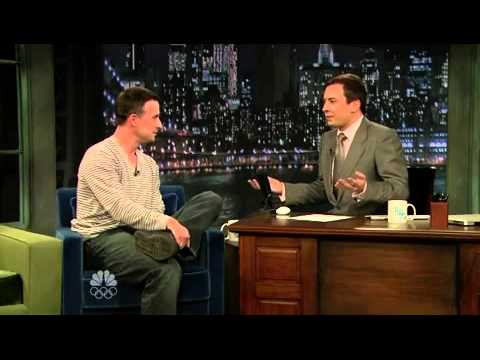 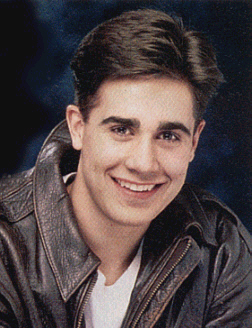 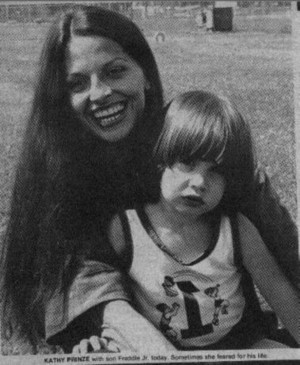 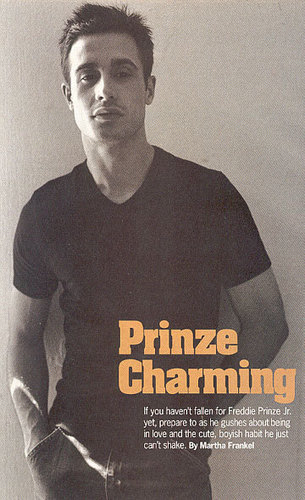 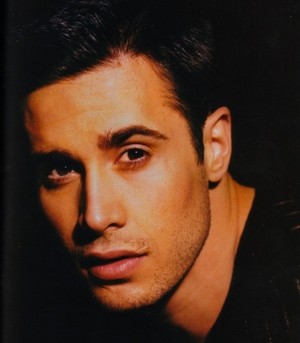 
B.L. Freddie, you must have had a complete riot making this movie, I mean who wouldn’t want to play Fred?

F.P. Well, actually in the beginning I didn’t. I wasn’t sure that the script was going to be any good and I didn’t want to see this cartoon made into a sham. But when Sarah got the role of Daphne and then I read the script, I couldn’t stop laughing and I knew I had to play Freddie. 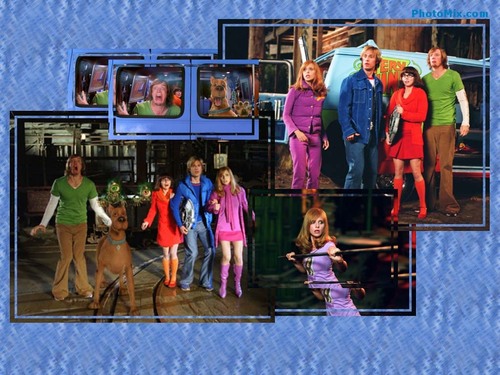 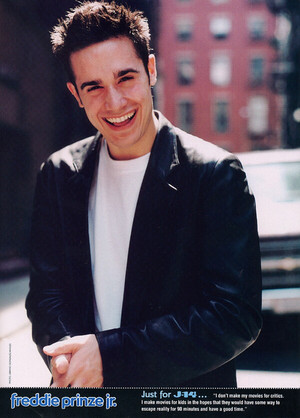 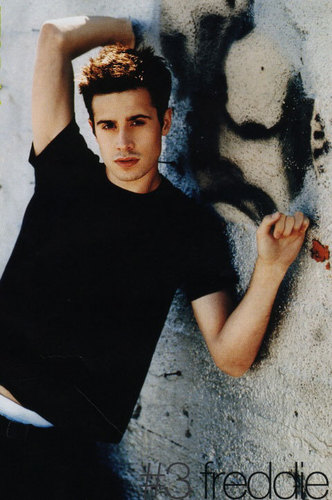 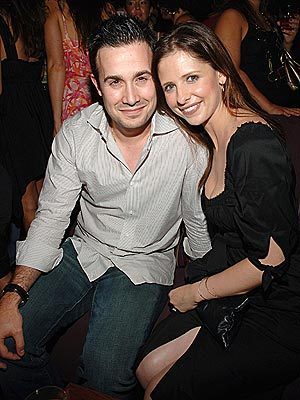 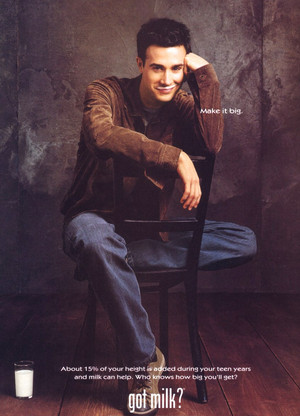 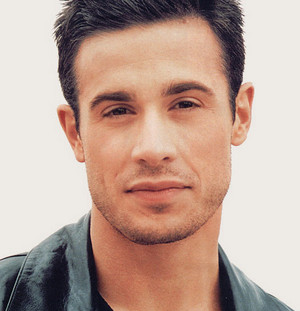 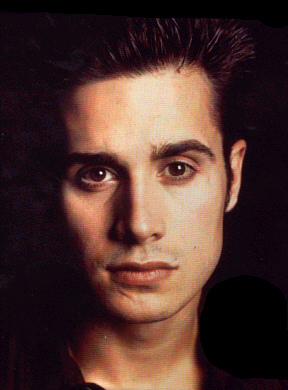