About Free Radio
posted by torrey

Free Radio is improvised comedy that chronicles the Cinderella story of one dim-witted intern, Lance (played by Lance Krall) who answers his call to greatness by jumping in to host a popular radio show when the real host defects to satellite radio. What follows is a glorious train wreck of botched celebrity interviews, on-air tantrums and generally lovable buffoonery.

The twist? Lance's hosting effort is so spectacularly awful, that ratings actually go up. This, of course, forces his frustrated manager, James (played by Brian Huskey) and co-host, Anna, (played by Anna Vocino) to put up with him for the sake of the ratings. The new show, "Moron in the Morning" continues to be a fan favorite.

Completely improvised, Free Radio offers a fresh alternative to the typical sitcom, showing just how far real A-List celebrities will go to tolerate a complete moron. In season one, Hollywood luminaries from "24's" Kiefer Sutherland to "Heroes'" Jack Coleman and comedy legend Ray Romano are subjected to the idiot storm that is Lance and "Moron in the Morning."

Forget "24," when is the sequel to "Flatliners" coming out? Will "Spiderman" be joining the cast of "Heroes?" Hey, isn't it time that Ray Romano played a serial killer? Only one show digs deep for the answers to these questions.

While runaway celebrity interviews make up the bulk of the show, Free Radio also goes behind the scenes to depict our loveably dim hero's struggle to deal with his newfound fame and earn the respect of his co-workers. 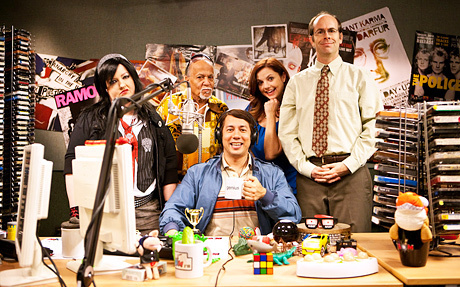