13
Game of Thrones: Season 4 Character Posters
posted by papa
HBO has just released a slew of new character posters for the forthcoming season which will debut April 6, 2014. It's tough waiting for the season premiere to drop but let's check out the new posters and remind ourselves where we left off with these characters at the end of season 3!

The posters all feature the quote "Valar Morghulis" which means "All men must die" in High Valyrian. You may remember that these were the parting words of Jaqen H'gar in season 2 (he was the man who granted her the 3 deaths).

Joffrey Baratheon
King of Westeros (at least in name though we all know Tywin pulls the strings!). Now that Robb Stark and his forces have been crushed, Joffrey is looking forward to wedding Margaery Tyrell and continuing his sadistic ways. 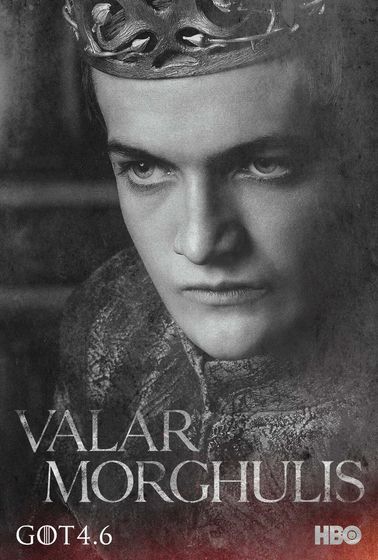 Tywin Lannister
The original "tiger mom", Tywin rules over his family and Westeros with an iron fist. Having pulled off some serious wedding planning with Roose Bolton and Walder Frey, his family now stands relatively unopposed in Westeros with the Northmen's army crushed. 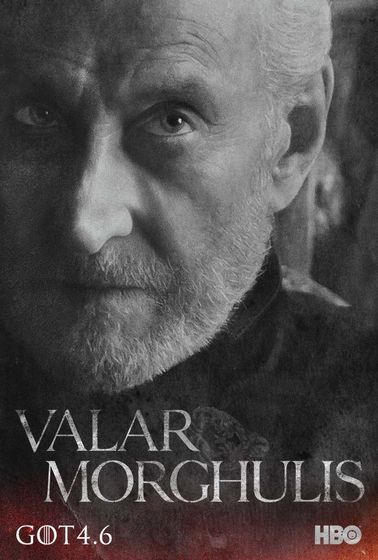 Jaime Lannister
After a long time away from his family at war, as a hostage and later on the run, he most recently rescued Brienne of Tarth and also lost his sword-hand. He returns to King's Landing and Cersei at the end of season 3. 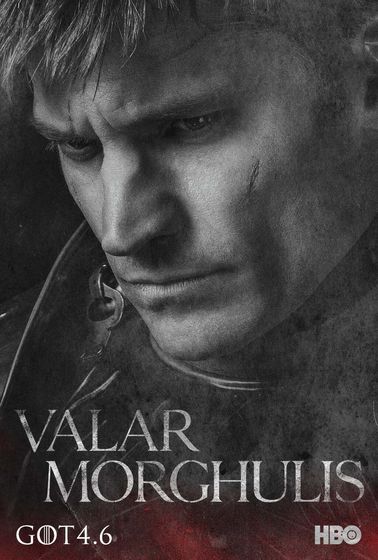 Cersei Lannister
Joffrey's mother is still dealing with the pressure of her overbearing father Tywin and her forced betrothal to Loras Tyrell (who, as we all know, isn't particularly interested in women!). Let's see how things shake up now that all the Lannister siblings are reunited in King's Landing for season 4. 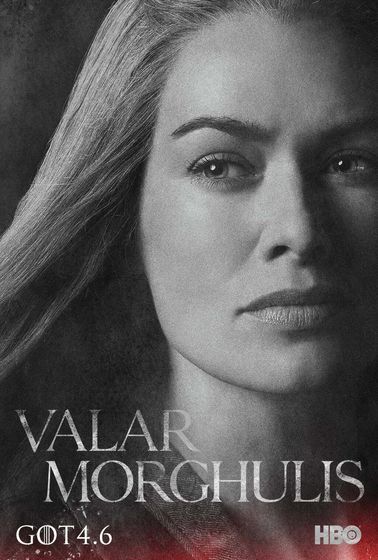 Tyrion Lannister
Everyone's favorite dwarf had a rough go of things in season 3, losing his lofty post as Hand of the King to his father and being forced to marry Sansa Stark. Still, Tyrion is not only a fan favorite, but one of the craftiest denizens of Westeros to be playing the game. 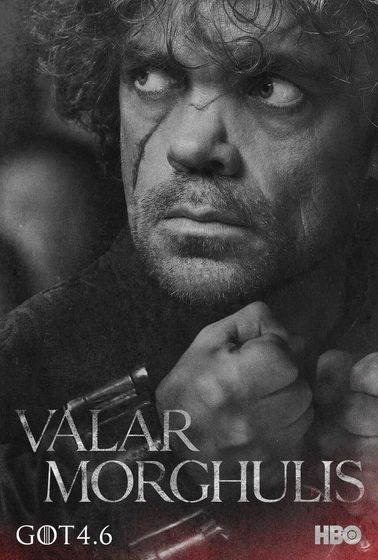 Margaery Tyrell
Look out Joffrey! Margaery is gorgeous, smart and knows when to show kindness and mercy to the down-and-out folks in King's Landing. There's been lots of talk in season 3 about the forthcoming wedding to Joffrey. Will we get to see what kind of queen she'll be in season 4? With her hard-as-nails grandmother, Lady Olenna (aka "The Queen of Thorns"), in tow, look out for House Tyrell. 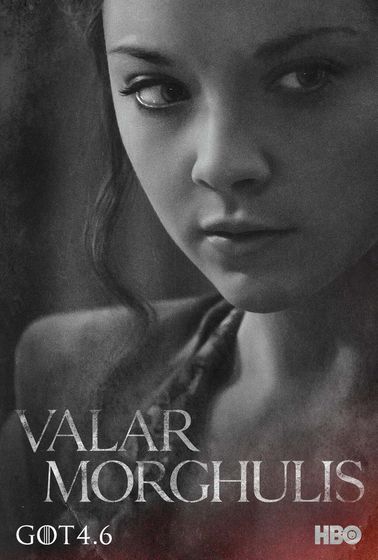 Daenerys Targaryen
She's got an army of Unsullied, the loyalty of thousands of freed slaves and three growing dragons. She's still on the other side of the ocean from the throne she wishes to regain but there's no doubting that the "Mother of Dragons" will be on the march in season 4 ready to put her new found power to the test. 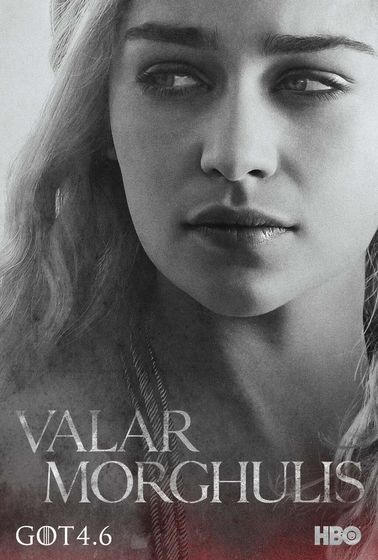 Jorah Mormont
The battle-worn knight and advisor to the Khaleesi still showed that he has the right stuff when he, Grey Worm and Daario Naharis infiltrated the city of Yunkai and went to town on the Yunkish soldiers. Still, with the arrival of Ser Barristan and Daario, can Jorah keep his vaunted place at Dany's right hand? 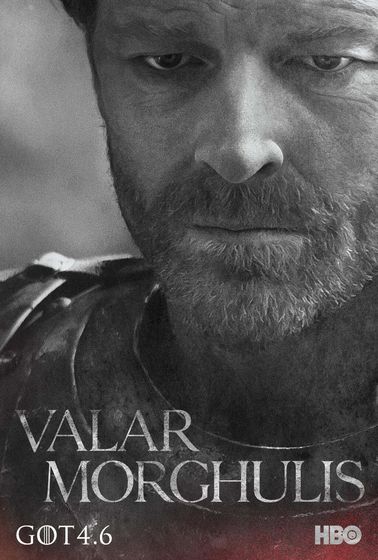 Daario Naharis
Leader of the Second Sons, a mercenary band, he oozes sex appeal, confidence and charm. He has pledged his allegiance to Dany, but can he be trusted? 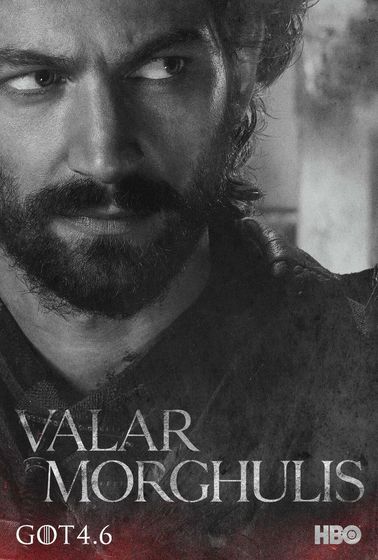 Sansa Stark
Sansa is an under appreciated character. She's had a rough go in King's Landing. She's had to endure being betrothed to a sadistic man-boy, witness her father's execution, endure beatings from the Kingsguard and now she's been wed to Tyrion, the Imp. All of this has toughened up the girl we've often considered the "softest" of the Starks. I'm guessing season 4 may finally give her a chance to exhibit some of that hidden strength. 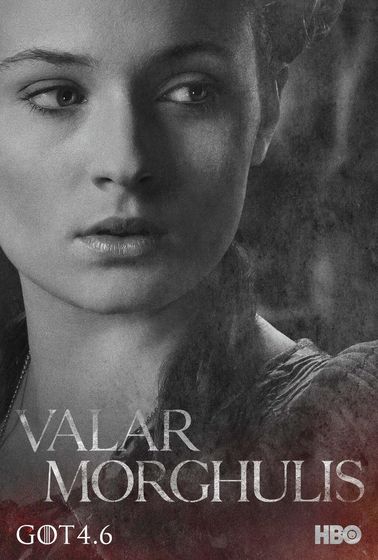 Arya Stark
Like Sansa, Arya has had a rough time of things since King's Landing. Unlike Sansa, Arya's exhibited a rough-and-tumble, get down and dirty attitude from the start. Yes she's currently the Hound's hostage but she's already had her first taste of vengeance when she kills a Frey who boasts of mutilating her brother's corpse. I'm pretty certain she's going to have a lot more vengeance to dole out in season 4! 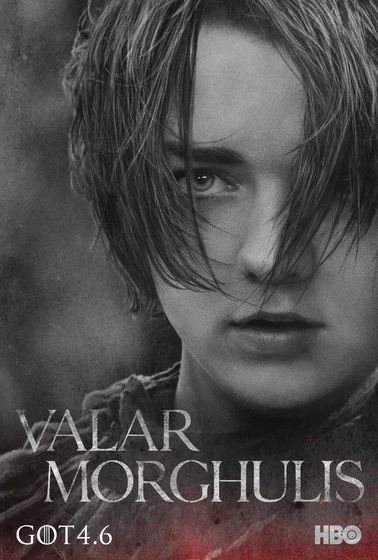 Bran Stark
On the run since the sacking of Winterfell. Pretty much everyone other than the folks he's traveling with think he's dead. Bran runs with a pretty weird crowd: Meera, Hodor, Jojen and Osha. It's like a weird band of misfit hippies. No doubt things will get weirder once he crosses the Wall (cuz those dudes beyond the Wall are seriously oddball!). 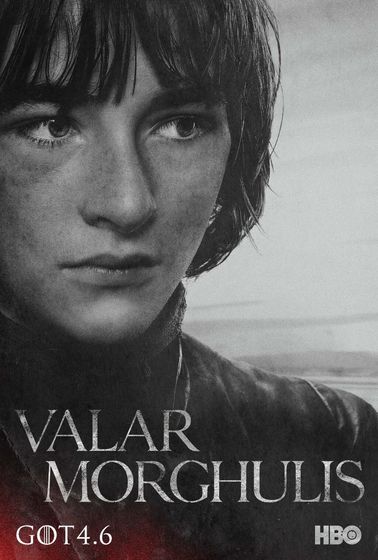 Jon Snow
Ned Stark's bastard spent a good portion of season 3 acting as a double-agent with the Wildlings all the while getting extra cozy with the hot, bow-wielding Ygritte. Now that they're back over the Wall and Ygritte has fired several "arrows of love" into Jon's body, we'll see how the romance blooms in season 4. 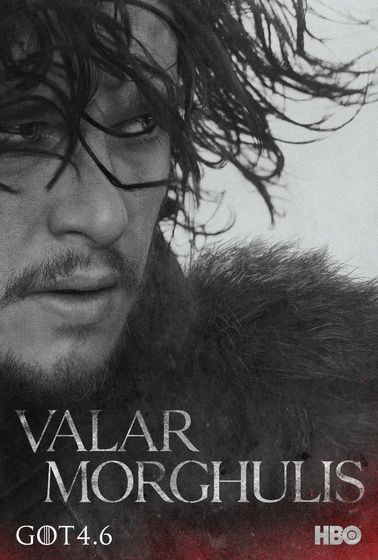 Oberyn Martell
We haven't heard much from House Martell, but Oberyn Martell, known as the Prince of Dorne and, even more colorfully, as the "Red Viper" is not one to trifle with. We'll get to learn more about his backstory and the enormous chip on his shoulder that he brings to King's Landing in season 4. 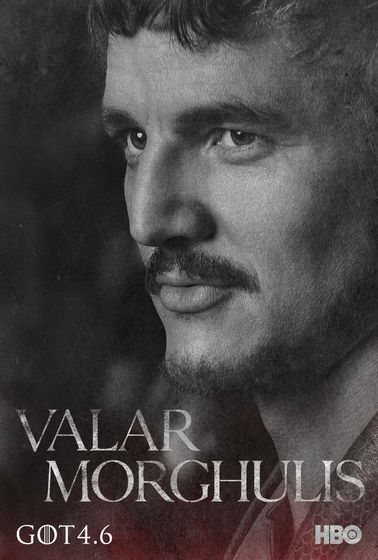 Petyr Baelish
Better known as "Littlefinger", though surely that is not a nickname he coined (embarrassing!). Regardless, this dude is the ultimate schemer and social climber. In season 3 he handed over Ros to Joffrey for a little crossbow playdate after he found out Ros was working for Varys (Littlefinger's eunuch rival). Littlefinger is also itching to expand his power with a marriage to Lysa Arryn (yeah the lady breastfeeding the 8 year old). Yeah that'll go well... 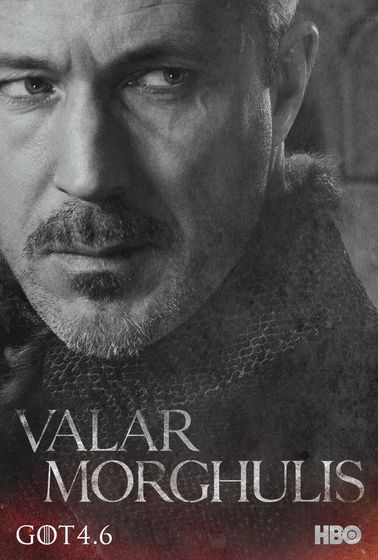 Brienne of Tarth
There aren't many genuinely "good" characters in Game of Thrones, but Brienne is probably one of them (hopefully that doesn't mean she's doomed to a brutal and untimely death). 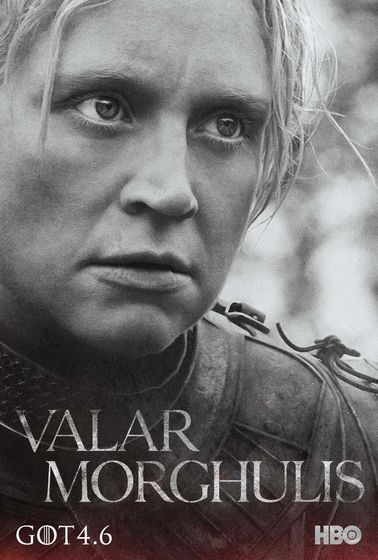 Melisandre
This priestess of R'hllor is one scary woman. We will never forget how she birthed that freaky demon that took care of Renly back in season 2. She's still itching to sacrifice just about anyone with a hint of royal blood to bolster Stannis' cause. She's a definitely a babe, but I think I'd run the other way if I saw her on a dark alley in King's Landing. 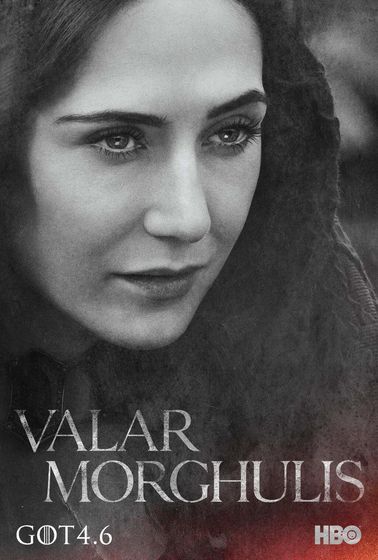 Tormund
Also known as "Giantsbane", Tormund is one of the Wildling leaders. He journeys over the Wall with Jon and Ygritte (before Jon goes AWOL) on a mission to take out the Night's Watch at Castle Black. 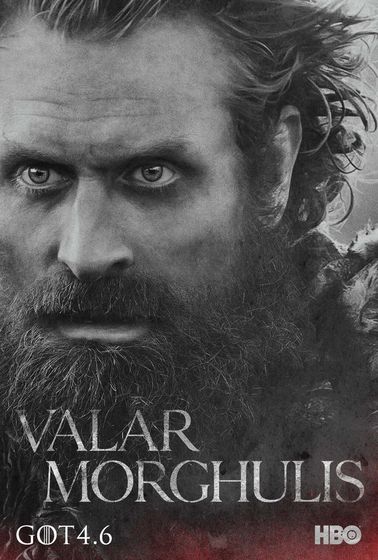 Ygritte
She fell for Jon Snow. Then she shot him up like a porcupine with several arrows. Not sure if that's a breakup or if that's Wildling for "I love you Jon Snow". Either way, Ygritte is the original crazy girlfriend from hell. 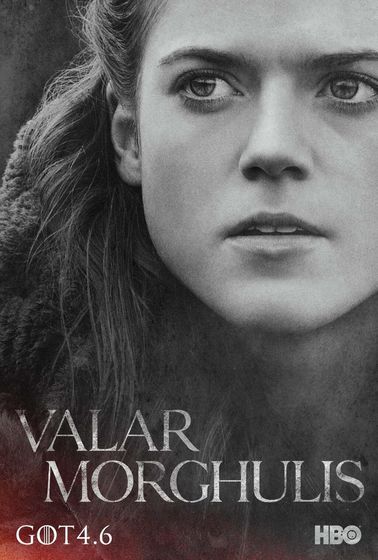 ytank, TimbuktufromSW and 11 others like this
karolinak1999 Awesome! can't wait!!
MuffinFan You are lucky, guys from the US! Just now, Season 3 is airing on our German Free TV, so I have to wait for S4 one more year... Why-hy-hy?! But, awesome posters and trailers anyway*___*
bober85 You also wanna say: "Lannister go f***k yourself"? :D 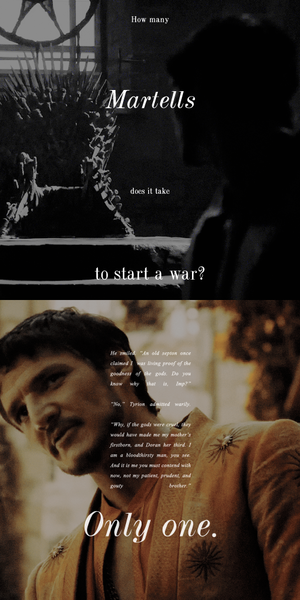 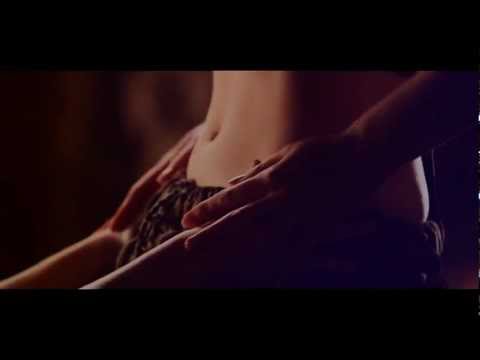 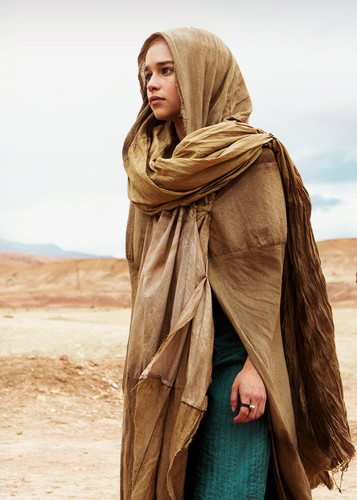 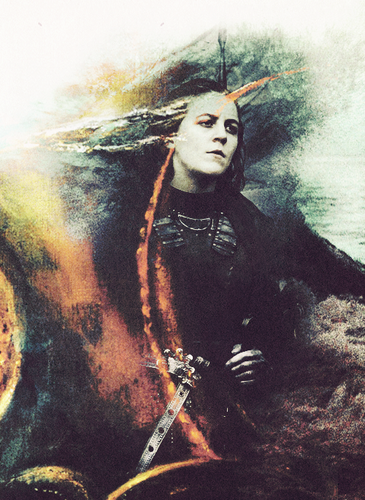 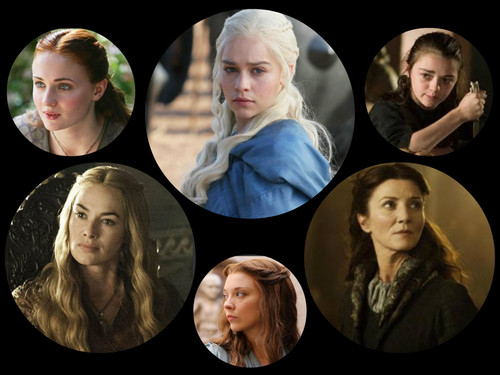 2
Women of Game of Thrones
added by xxxqueenMaryxxx 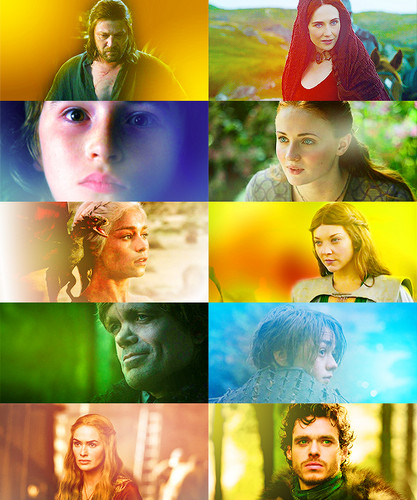 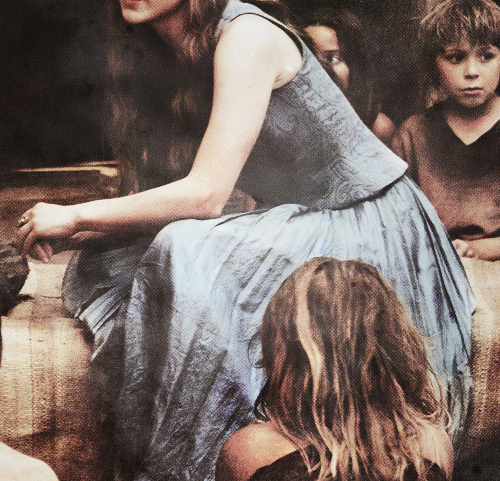 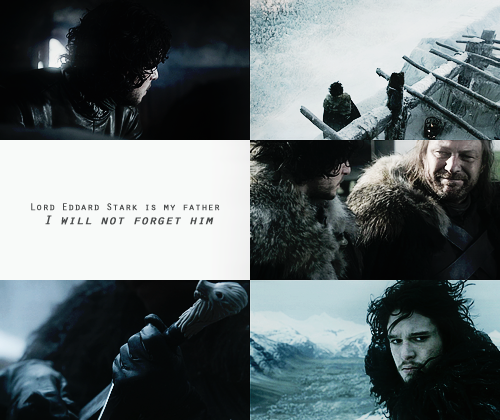 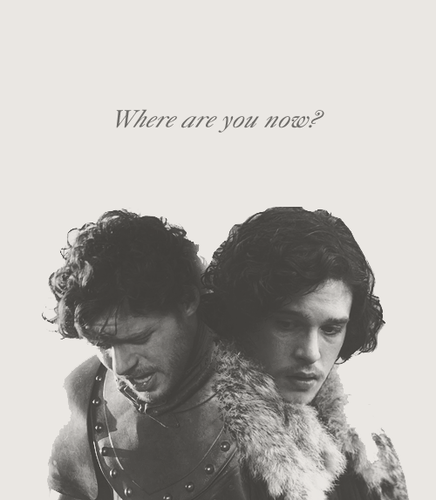 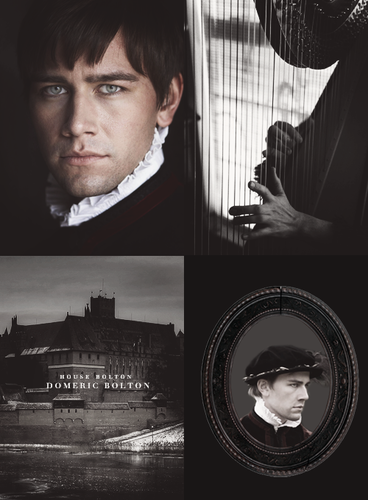 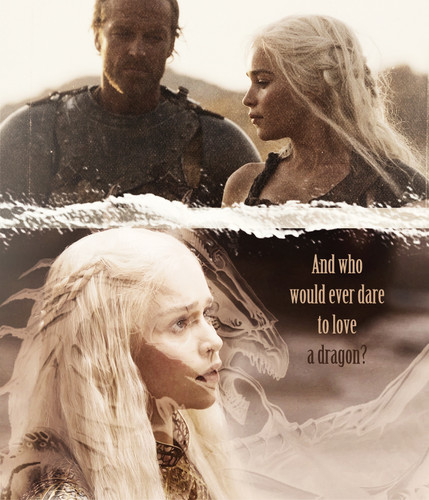