2
Why Ron and Hermione? In Hermione's defense
posted by HaleyDewit
Source: ronandhermione.net

It seems that Hermione has replaced Ginny as the most hated female in the Harry Potter series.

First of all, she hasn't changed. She's still the same Hermione. There's just one change in her character, and it was one that many R/Hr shippers, including me, knew would happen. That is, she became more obvious and more desperate about Ron as she came to the realization that she may actually lose him to another girl or that he may lose interest in her. Nothing else is different. There is no "New Hermione" or "HBP Hermione". She's still the same Hermione Jane Granger that we have had from Book 1. She's just in love now.

Many R/Hr shippers have been trying for a long time to make people see that Hermione is not perfect, but we were just called Hermione bashers. We weren't bashing her, we were accepting the Hermione that JKR was writing instead of elevating her to something that she was never meant to be.

Some say that the real Hermione would never want to be with Ron. Quite wrong. The real Hermione has wanted Ron's approval and acceptance from Book 1. That's why she was crying in the bathroom on the night the boys saved her from the troll. Then in Book 3, after being estranged from him and facing the possibility that he could've been stabbed by Sirius Black, she throws herself on him weeping and apologizing when he finally speaks to her again. In Book 4, the book that JKR has said has the answer to whether she likes Ron as more than a friend or not, Hermione is bothered by Ron's reaction to the veela, she was upset that Ron wanted a good looking date, and she told Ron to ask her next time and not as a last resort. Also, she disapproves of Ron's interest in Fleur, she's furious when Fleur kisses him, and she scowls when he compliments her. She's even a bit nasty when Ron tries to flirt with Padma, his Yule Ball date. In OotP, she dislikes Luna who laughs at his jokes and takes an extreme interest in him, even if it's not romantic. Hermione marked her territory with a kiss on the cheek just minutes after Luna had wished "Ronald" good luck. Hermione's wanted a chance at romance with Ron for a long time. Her continued interest in him in HBP is not a sudden and unexpected development.

"New Hermione" is also accused of being nasty. I find this surprising because a lot of anti-R/Hr shippers often said that Hermione's nastiness toward Ron in OotP was evidence that she wasn't interested in him. Now that they see the nastiness is because she is interested in him, they consider it negative and out of character. I guess comments like "emotional range of a teaspoon", "Don't be pathetic", and "insensitive wart" aren't nasty? I'm smelling a double standard. As she became more desperate in her realization that she may lose her chance with him, she grew even nastier. A part of her is angry and frustrated at him for being a clueless idiot, but another part of her is angry and frustrated at herself for loving that clueless idiot anyway. Love is a powerful emotion, and when we are able to love freely, it's a beautiful thing. However, when we have to lock it away, it can be very dangerous. As Harry observed when he was contemplating Ron and Hermione becoming a couple, sometimes the fear of it not working out makes things very complicated. Would the friendship last? That's something that MUST be plaguing Ron and Hermione. A bit of tension is to be expected.

Some are also saying that she's never been manipulative before. HA! The fact that she is so clever makes her very good at manipulation. She manipulates her parents, teachers, fellow students, Rita Skeeter, and even Harry. She was also able to explain to Harry about Cho's manipulative behavior because she was doing the same thing with Ron and Viktor. It may not be sensible, but sometimes girls do things to see just how much a boy likes them. They purposely make them jealous. While canon (through Ginny's dialogue) has confirmed that Hermione actually did have a romance with Krum, I firmly believe that her continued mention of Krum was purposely done to measure Ron's feelings. She purposely wrote that very long letter right in front of Ron in OotP. She wanted him to ask about it. I've been trying to tell people for many months that the letter writing/post Cho kiss scene, while on the surface was about Harry's love life, was actually all about Ron and Hermione in the subtext. I think the McLaggen bit in HBP proves that. Hermione finds someone that challenges Ron and uses that to her advantage. This has been her character for a very long time. It's nothing new, and no one should be surprised.

She's also accused of not being a good enough friend in this book. WTF!?! First of all, I have to say something.

Harry has become a better friend to Hermione in this book which shows his tremendous growth as a person and shows his beautiful bond of friendship that he has with her. He ran to comfort her when she saw Ron with Lavender. He went after her also when he had come to the conclusion that Hermione's needs were greater than Ron's at the time. Hermione was never his doormat, and her life never revolved around Harry. She's ambitious, driven, and needs to be the best for herself, not Harry. This has always been true. I think Harry has truly realized that his friends have lives that do not revolve around him. We're finally seeing Harry take interest in their personal lives and everyone is becoming less Harry-centric. Bravo, Harry.

That's one of the many things that always bothered me about H/Hr. As a sidekick she's always going to give more than she receives. That is her role, but not everything Hermione does is for Harry. I find it ridiculous that anyone would think that she is somehow less of a friend to him now. She remained fiercely loyal, concerned for his safety and well being, and as supportive as ever. However, she's never led a Harry-centric life, and this book continues that trend. Furthermore, if she would have been made a love interest, her life would have become Harry-centric, and that would have diminished her character.

There's one criticism that I partially agree with though. Some are saying that this "New Hermione"does deserve someone like Ron. I know it's meant as a jab to Ron who's never received much respect from those who elevated Hermione to something that she wasn't, but I consider it a compliment to both of them to say that they deserve each other. They are both very real characters with good hearts, loyal spirits, and many admirable talents and qualities, and Rowling knows how to write teenagers. She can write them with flaws, moodiness, and temperamental attitudes and we still love them. I've loved Hermione since Book 1 because she's not perfect. I think HBP was a wake up call to anyone who thought that Hermione was supposed to be some sort of supreme goddess. But, yes, I agree that she deserves someone like Ron. She deserves someone who will vomit slugs for her, fret and overcome his greatest fear when she is ill, stand up to the teachers when she has tears in her eyes, will notice her irregular class schedule, notice her new teeth, wonder about her love life, defend her from CAPSLOCK!Harry, and hold her, stroke her hair and cry with her.

They've been written to be together since Book 1. The first meeting foreshadowed it. Ron's truly been the only one for her. I knew that the moment she threw herself on him in PoA and broke down. She's always been his. He's always had her. He just doesn't realize it, yet. Typical boy! (As Jo would say)
TheExcorcist and sevendeadlysins like this 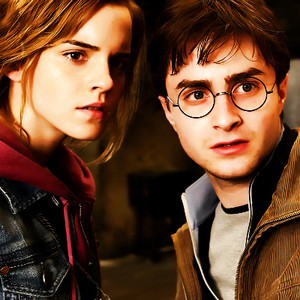 3
Hermione Granger
added by flowerdrop
Source: made by me - flowerdrop