It is my opinion that Harry Potter and Luna Lovegood would have made a perfect pair. To me, Harry and Luna fit together so naturally, so effortlessly, so perfectly. Here's why.

Harry and Luna bring each other a great deal of happiness, and they understand each other like no one else. There have been many terrible things that have happened to Harry, and there are times when nobody can cheer him up - not Ron, not Hermione, not Dumbledore, not Ginny, nobody at all - and yet Luna can. When Sirius died, Harry could talk to no one. He got angry at anyone who even came close to mentioning it, and he detached himself from his peers. However, he found that he could speak to Luna about it. He found that she knew exactly what to say, and what not to say, and how to listen, and how to bring him out of his depression. Another example: during the Battle of Hogwarts, Harry, Ron and Hermione were all fighting dementors, but Harry found that he could not bring himself to produce a patronus. Luckily, Luna came in, and not only did she help to ward the dementors off with her patronus; she encouraged Harry, and she gave him the strength and the happiness to produce his own patronus, which is such a huge thing. In Order of the Phoenix, when the Ministry had turned against him, and many people called him a liar, he felt nobody could understand him. He was outcast, and even though Ron and Hermione, as well as a few others, were on his side, he did not feel as if they understood. However, when he spoke to Luna, he felt that she did understand him. She had been an outcast in all her years at Hogwarts, and yet she was happy. They formed a natural connection as they spoke, and she shared her optimism with him. After he spoke with Luna, Harry felt far better, and he began opening up to his friends a bit more. After Harry finally defeated Voldemort, everyone wanted to party and celebrate and congratulate him. It was Luna who recognized that all he wanted was some alone time, and it was she who provided for the distraction so that he could slip away. Luna never judged him, and always listened to him, and she was always honest with him, which is something Harry needs. It was Luna who was always able to bring him out of his depression, no matter how deep it went.

And it is not one-way. Harry has also brought Luna a great deal of happiness. Before meeting Harry, Luna had no real friends at school. Sure, a few people, such as Ginny, were polite to her, but nobody was really her friend. However, Harry became close with her fairly quickly after meeting her. He was able to see past her eccentric ways and see a wonderful person in Luna. He was the first person to defend Luna when others, including Hermione, openly scoffed at her. He brought new friends into her life, including Neville, Ginny, Ron, and Hermione. He created the DA, which gave her something to look forward to. Although Luna has always been happy and optimistic, there was always something missing, and Harry brought that to her. Harry brought a great deal more happiness into her life.

Also, Harry and Luna are just what the other needs. Harry is a pretty angry person (and understandably so). So much has happened in his life, and it often becomes too much. If there's one thing he needs, it's to escape from his often dark reality, just a little bit. He needs a positive, optimistic figure in his life. Likewise, Luna is often lost in a dreamland of Nargles and Wrackspurts. She has also been outcast by her peers who only see her as weird. If there's one thing Luna needs, it's to come back down to earth, just a little. She needs someone who can see past her quirks and oddities, just as Harry needs someone who can see past his anger, someone who can see past the fact that he's The Chosen One. These two just fulfill each other's needs so well, and they can see the wonderful person in the other.

There are just so many little things that go on between them, such as Harry asking Luna to go with him to Slughorn's Christmas party, or Luna recognizing Harry just by his expression at Bill and Fleur's wedding even though he had taken Polyjuice Potion, which really show a special connection between them. Little things, such as both being able to see the thestrals, and both being able to hear the voices behind the veil. These little things, which show a very strong connection, and bring each other happiness, show more than anything how perfect Harry and Luna are together. 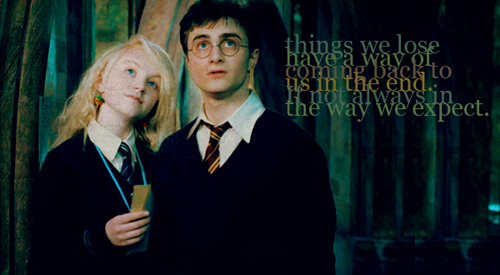 emilykuru, mon2012 and 9 others like this
maryksand That's just perfect! It's like you took words out of my mouth. Exactly. On so many levels Harry/Luna where what one another needed. They could make each other happy and complete. They balanced each other out. Luna could see the real Harry and it was unconditionally: was he a Chosen one, a boy who lived, a boy who lied, no matter what things others said about him - it never mattered to Luna. She saw the REAL him behind it all and she knew exactly what he needed. Even few words from Luna where enough to make Harry feel better and believe in life again even when his best friends couldn't help him with it. Such moments like the little conversation they shared after Sirius' death when Luna was the only one who managed to get through Harry's pain and anger and he just opened up to her and shared important things with her and she made him feel a little better when no one was able to. She didn't push him, she didn't try to cheer him up, she was just there for him and knew what to say and they where equals in every way. Then when Harry lost all his faith and strength and didn't want to keep fighting anymore, it was Luna and only Luna who made him "think of something happy" - and he did. She was the girl who could recognize him just by his expression though she didn't even know he will be able to come to that wedding and he didn't even look like himself. Finally, even at the very end, after the war, no one actually tried to understand what Harry needed at that moment, but Luna just KNEW. She knew he needed some peace and quite and he didn't even have to say a word to make her understand him. All those things are the greatest proof how perfect they where for each other. I still can't believe they didn't end up together. Thank you for this article!
romioneisthekey This is totally me! Thank you so much for writing this article!
fallenangel123 I agree completely.
Stargaryen Even her name hinted at her importance in Harry's dark life. She's not called Luna because she's a 'lunatic'. No, she is Luna, the moon, the light in the darkness. 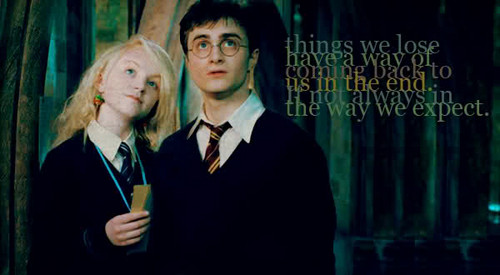 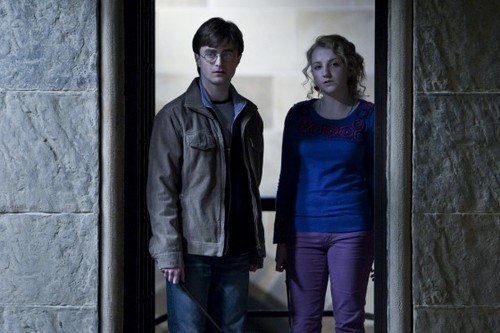 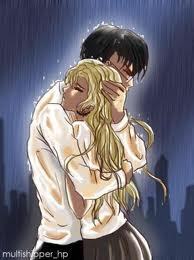 Luna and Harry
added by TrueHufflepuff 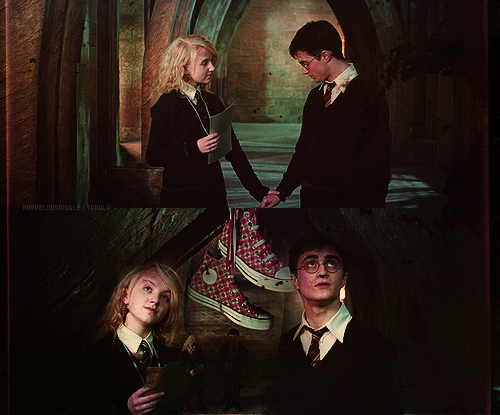 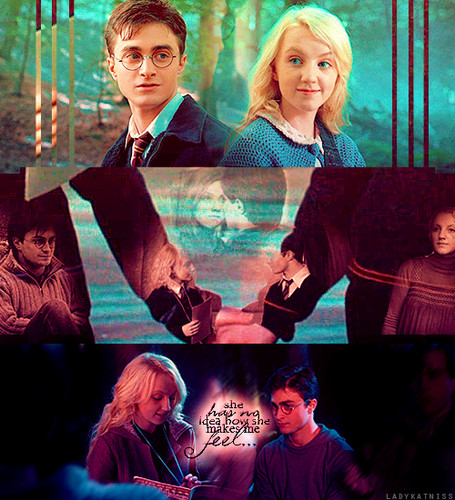 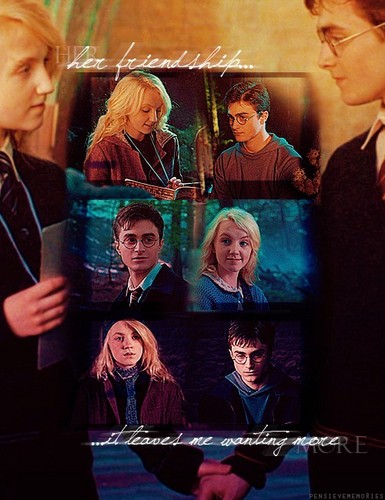 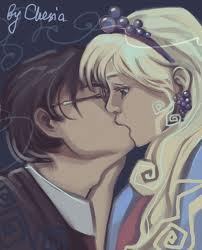 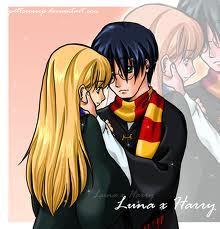 1
Harry and Luna
added by TrueHufflepuff
Source: Not my work. 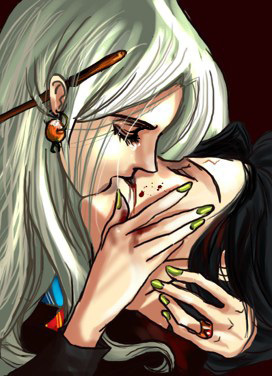 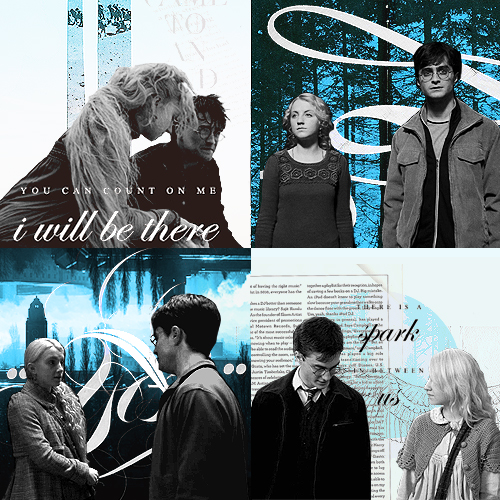 You can on me I will be there
added by TangoThang
Source: http://blanchefleurs.tumblr.com/ 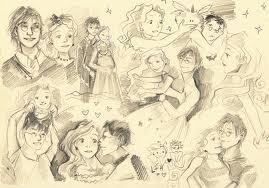 1
Luna and Harry
added by TrueHufflepuff 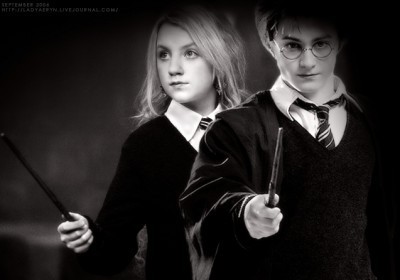 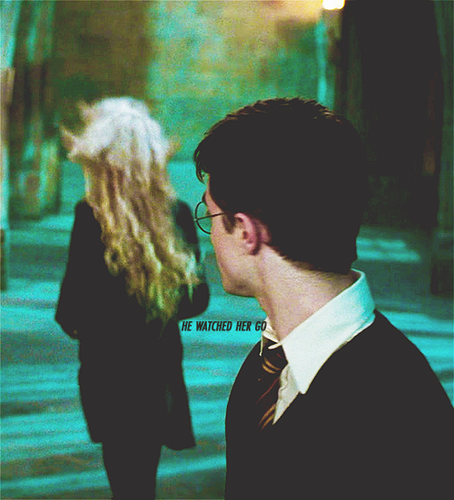 harry and luna
added by SilverPatronus 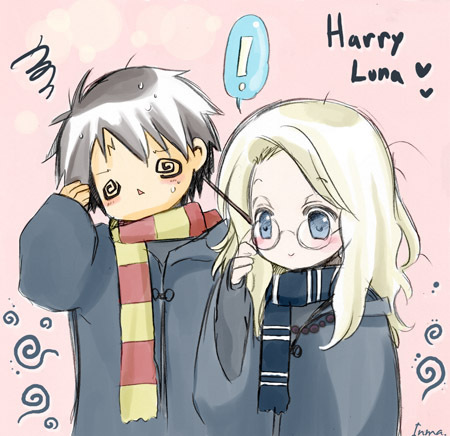 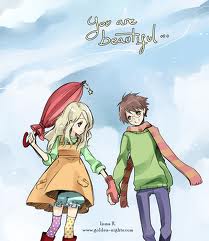