"Oh my god." I said.
"GET A ROOM!" shouted Sarah.
"Shut up!" I told Sarah.
Liam and Kelly looked at us and laughed. Kelly mimed the words, "Yes!" at us.
For a moment I forgot everything that had happened about Harry.
"Anyway, what just happened with Harry?" asked Kelly.
"God knows." I said.

"Zayn texted back." said Harry.
"What did he say?" asked Louis.
"Becky said some how." replied Harry.
They looked confused.
"What?" said Louis puzzled.
Harry sighed.
"Well, I wasn't really expecting a straight answer from her." admitted Harry.
Louis didn't reply. He thought hard about something.
"Shall go back to the living room?" asked Louis.
"Are you mad?! How can I go out there knowing everyone is gonna be staring at me?" shouted Harry.
"Well, what if Sarah's mum comes down here and relises we're in the toilet together! She's gonna think we're GAY!" explained Louis.
"I suppose." said Harry.

"I need to go to the toilet." I announced.
"To much imformation!" shouted Emily.
"Wait, WHAT ON EARTH IS CLAIRE DOING WITH DEAN?!" asked Emily furious.
"Flirting?" I guessed correctly.
Emily went red with anger.
"If she gets any closer to Dean than she already is I'm gonna kill her." threatened Emily.
I walked over to Liam and kelly quite scared.
"Can you keep an eye out for Emily cause I think she might kill someone." I asked.
"Err, ok."
"Thanks. I need to go to the loo." I said.
I walked away about 2 metres until Liam said something.
"Wait..." started Liam.
"What?" I asked confused.
"Oh, nothing." he said.
"What were you gonna say?" asked Kelly quietly.
"Harry and Louis is in there." answered Liam.
I walked out wondering what Liam was gonna say.

"I'm gonna see what's going on in the living room cause I really bored sitting down on a bath side!" shouted Louis.
"Ok. I'm not coming." said Harry.
Louis walked out and saw me walking to the bathroom.
"Err, Haaaa. Nothing." said Louis oddly.
"What?" I asked Louis like I did to Liam.
"Nothing! I wasn't gonna say anything!" protested Louis.
I didn't believe him but I carried on walking. I heard some kind of noise like a sneeze. I was a bit scared and puzzled. I opened the door to find Harry sitting on the the bath side!
"Err, hi." I said.
"Hey." Harry said.
"Can I go to the toilet, please." I asked akwardly.
"Yes." he said quickly and ran out red in the face.
I didn't actually go to the toilet because I was embarassed! I know I'm probably not gonna be as embarassed at Harry.
"Amy!" cried a voice that sounded familier.
It was Liam.
"What?" I asked.
"So what happened?" Liam asked me.
"You knew?!" I said.
"Yeah!" he replied.
"Go get Harrry." I ordered.
"Ok!" he said and went to fetch Harry.
Why did I just to that? I heard footsteps getting closer and closer to the bathroom. Someone opened the door (who was obviously harry) and walked in.
"You wanted to see me?" Harry said nervously.
"Yeah." I replied as nervous as Harry.
"W,what?" asked Harry.
"Is is true?" I said.
I didn't look at him in the eye. he paused for a second. Probably trying to pluck up the courage to say whatever he was gonna say.
"Yes." He finally said.
There was a very silent pause. I didn't know what to say. I was standing there like a lemon.
"Yeah. Well, do you wanna go out with me then?" I asked.
"Ok!" he answered after the second I asked him.
He suddenly kissed me. There was laughed and whistle noises. Little did I know Liam, Zayn, Niall, Louis, Kelly and Emily were outside listening!
"We were wondering when you were gonna go out!" they all said.
"What?" me and Harry said confused. 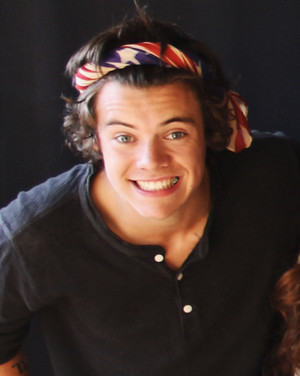 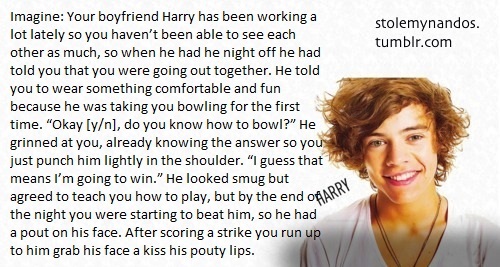 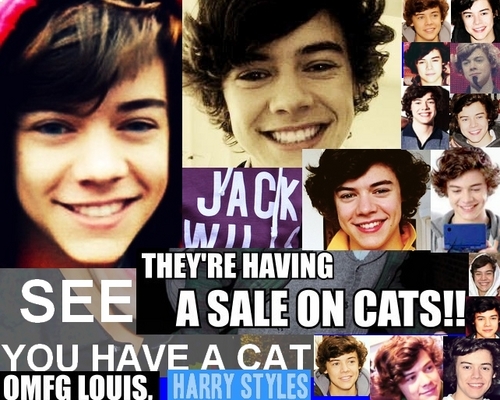 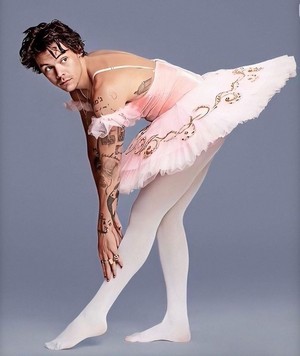 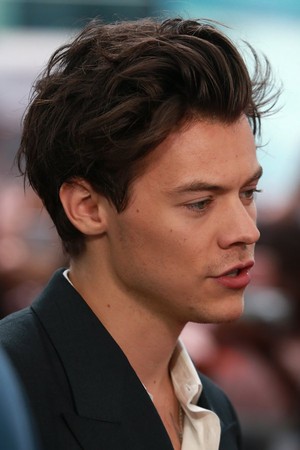 Harry at the Dunkirk Premiere
added by QueenSaxon 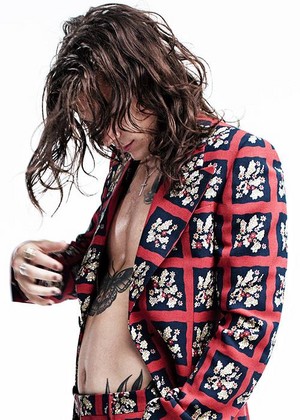 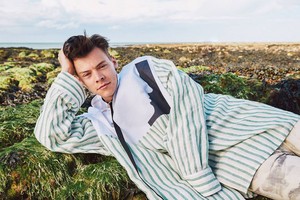 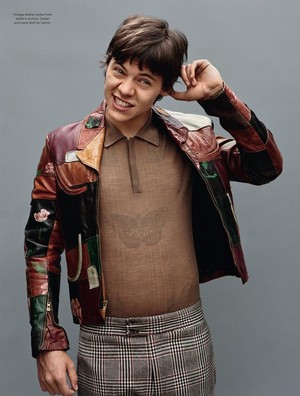 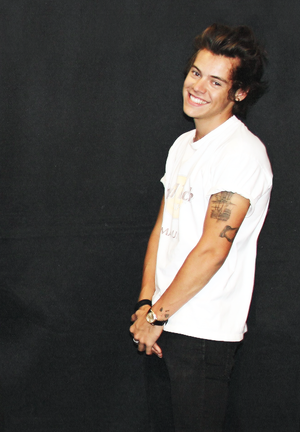 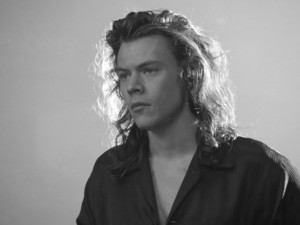 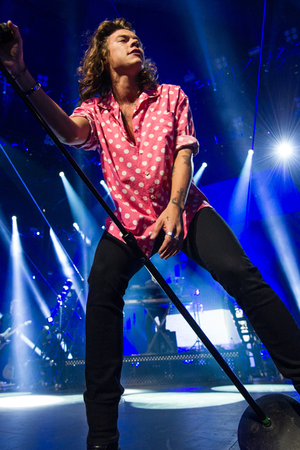 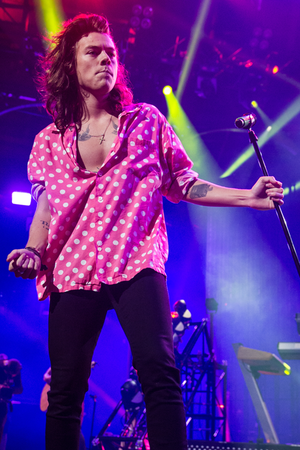 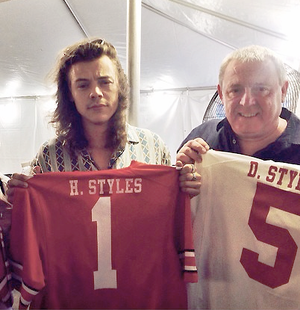 Harry and Des
added by Blacklillium 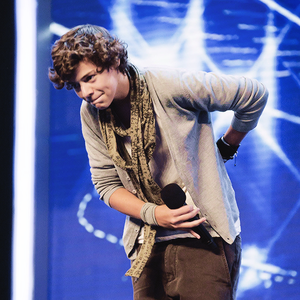 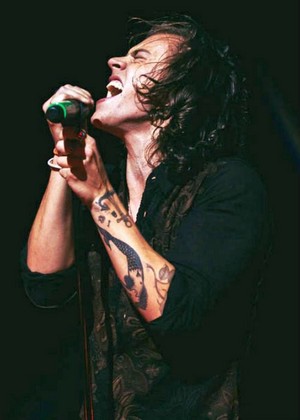 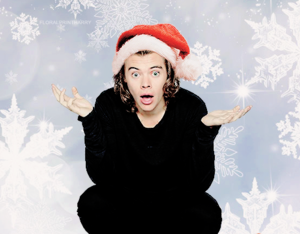 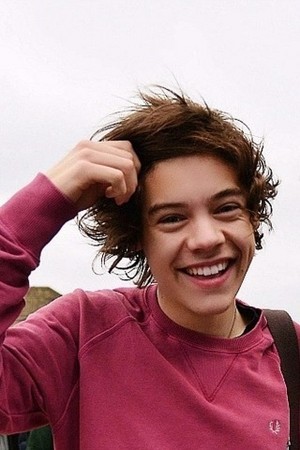