This may not be the best place to post it but this is something I feel the need to share and see if there's anyone else who feels the same way.

I love Hetalia, but there's stuff in the fandom that tends to ruin the whole thing for me. So here's my list of things that annoy me about the Hetalia fandom.
Note: I do respect my fellow Hetalians and I'm sorry if this offends anyone in any way, it wasn't meant to.

1) Hetalia is a COMEDY! Not a World History class! Yes at times it does teach you some pretty interesting stuff, but it's meant to be told through an inaccurate, stereotypical, comical portrayal. And it does make history more fun to learn about, but don't act like you know everything about history because of it.

2) How some people seem to revolve the whole series around sex and the pairings and what not. When the real Hetalia has nothing to do with yaoi. If you like yaoi that's cool, we all have different things that interest us and if you like it that's fine. But please take it somewhere else! Because it's freaking annoying seeing chanting about, "Yaoi/Fangirling/Fainting/Nosebleeds/Squealing/blah blah blah" Take those sort of things to a video that actually has something to do with yaoi instead of ruining the Hetalia videos that are non yaoi. Like when I finish watching an episode of Hetalia in which I don't see anything sexual at all, just good old regular Hetalia with the stereotypes and comedy and history, but nothing sexual, I go down to post a comment, I see half of the comment section filled with pervertedness (yes I realize that's not a real word), and it ruins the whole show for me.
Seriously, not only are you kind of people pushing others away from watching Hetalia, but you're spoiling the show for others who are already fans.

And it's annoying when people say things like "so and so is gay, or so and so is bi, or all of the Hetalia characters are gay or bi". In the fandom they may be portrayed that way but don't say that about the actual character in the real Hetalia because most of the time there's no apparent evidence supporting it from the anime or manga. Most of the time it's just your peoples headcanons.
You just can't casually state things like that, because when you constantly say that kind of stuff it makes people start to believe it's true, besides, that's Himaruya's decision to decide. And so far he's only confirmed the sexuality of two characters. Sweden who is homosexual, and France who is bisexual.
Also I should mention I am not against homosexuals in any way, I fully support gay rights. If there were more characters confirmed with a sexuality I wouldn't really care, it just annoys me when the fans talk about it like it's canon when it's not.

One more thing I feel I need to add. It's a shame when the fans have to go and ruin such sweet innocent pure brotherly moments with "yaoi". If you think a fanart picture of Chibitalia kissing Austria's cheek or England singing Phantom of the Opera to Chibi America is "yaoi" or "perverted", then I can't help but feel you're a sicko. Seriously, what is so wrong with kissing the cheek of your father? Or singing a lullaby to your baby brother/son?
Grow up!

Again, if you like yaoi that's fine, I'm not trying to offend anyone, but please shut up about it for once.

3) Speaking of sickos, people who find rape and pedophilia humorous. When the hell was this ever acceptable!?!
Ever since I've started getting into Hetalia I've seen some pretty weird stuff in the fandom, but it amazes me the level of sickness and disgust that the fandom reaches. For instance when people constantly label some of the characters as "rapists" or "pedophiles". Or seeing disturbing fanart like, Spain lifting chibi Romano's dress and glancing up towards his...yeah. Also probably the most disturbing I've come across, England trying to remove kid America's clothing with an evil smile as kid America is helpless and scared. I highly regret seeing this one especially.
But oh no, it gets more disturbing than that. Then you scroll down to the comments and see nothing but positive "funny" comments like "lol, you pedo", or "You so gunna get raped!"

Grow up people! Please grow up from your immature cruelty! Because rape and pedophilia may be funny to you, but for others it's not even close.
It doesn't even make sense in the first place, Spain, he's fond of children, so that means he's sexually attracted to them? In that case we might as well label every teacher off as a pedophile.
France, he's perverted, but does that mean he's actually ever tried to rape anyone? Did you not hear him in that one episode saying "love is something you shouldn't force on others".

It's just not right to find this kind of stuff humorous while the victims of it are suffering from the memories of a very horrible traumatic experience, or parents every day who are morning over the loss of their son or daughter to a child molester.

I know you guys are perverts but really think about what you're saying, there's a line that is being crossed here!

4) People who soil history with Hetalia.

I understand that you guys like Hetalia and are trying to promote it. I love both Hetalia and history. But don't go to a history video, or article, or anywhere else just to comment about Hetalia. Because there's people who aren't there just because of Hetalia who you are annoying. There's some people who actually like to take history seriously. Those countries mentioned in terms of history actually exist as more than just anime characters. So if you're not there to learn about the actual history, why even bother? One or two comments, fine. But hundreds?!? I mean, all I wanted to do was go to a video to learn about the Kingdom of Prussia, and considering Prussia isn't most commonly known outside of Hetalia, I expected a few comments. But I literally had to go through 7 pages before I could find a comment about the actual Prussia! And when I hear stories about people that were in the same history class with a Hetalian it was always just..."OH MY GOSH I LEARNED THAT FROM ANIME!" *teacher says the word "Germany"* "DOITSU!" *teacher mentions something about an invasion* "LOL YAOI!" .__.

5) How people are always asking the most ridiculous questions about Hetalia when if they were to just pick up a history book they would get their answer. For example, I always hear questions like "Is HRE and Germany the same person?"
Well I wouldn't really consider this a ridiculous question. I've seen a lot more ridiculous ones than this. It just bugs me when people answer yes to this but they only think so because of how similar the two look, when they should rely more on history to answer it instead of appearance.
Edit: Ok so I kind of worded this a little wrong but what I basically mean is that you shouldn't make silly assumptions about history because of Hetalia.
Example:

"America how could you! Stupid Revolutionary War, How could you hurt Iggy like that!?!"
-Because Britain was being controlling and America just wanted freedom for him and his people.

Ok, so sorry if I came out wrong on that one but please take your time to research real history. Like I said in the 1st one Hetalia isn't totally accurate so don't make such assumptions about history from it.

So that was something that I just wanted to get off my chest. Some of this stuff is just awful. I can imagine Hima-papa himself having his fair share of face palms because of the fandom. 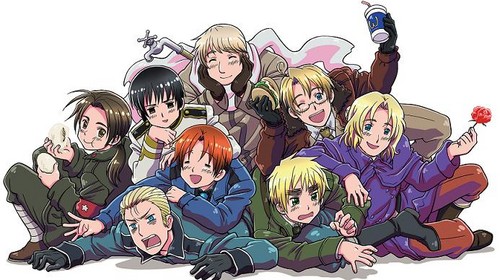 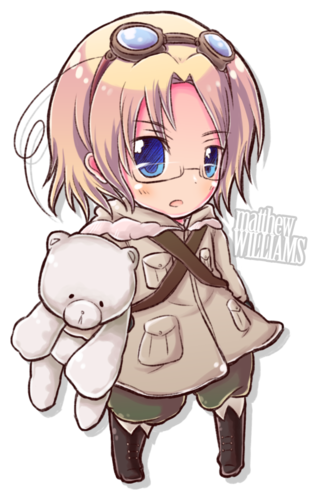 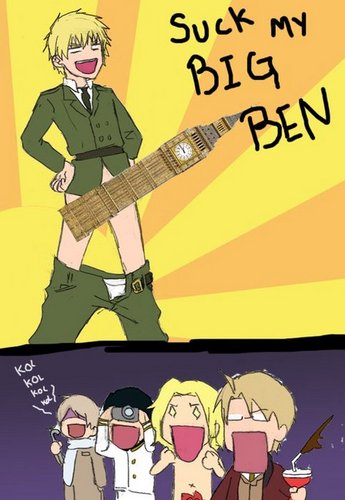 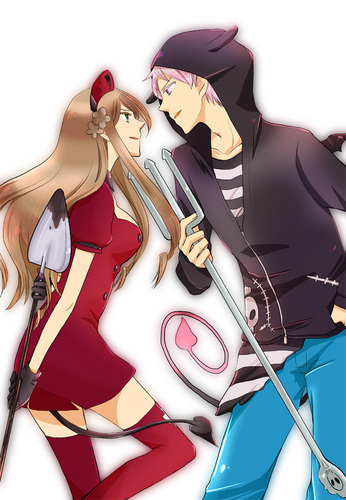 2
Hetalia Fanart
added by BLooDy_NaTaLy
Source: I took them all from Zerochan. Credit to the respective artists. 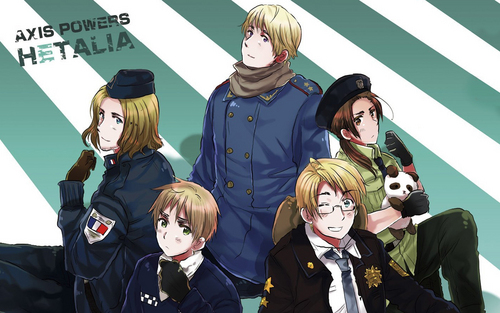 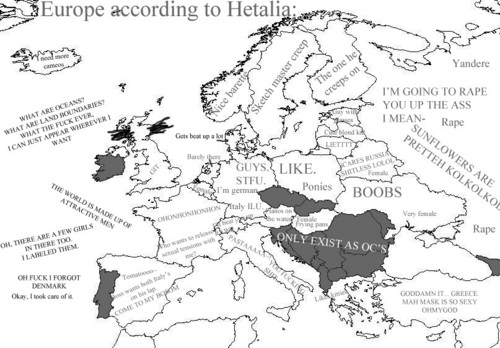 9
Europe according to Hetalia fans.
added by LunaShay 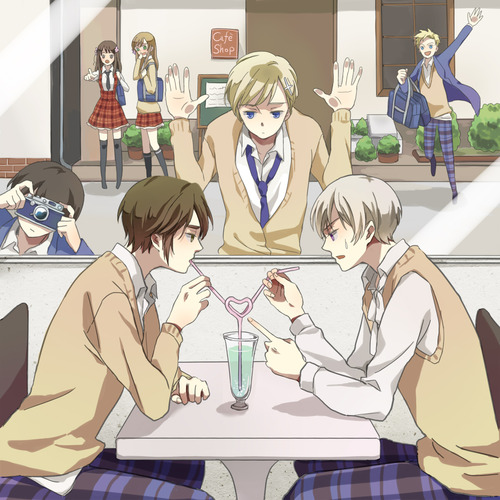 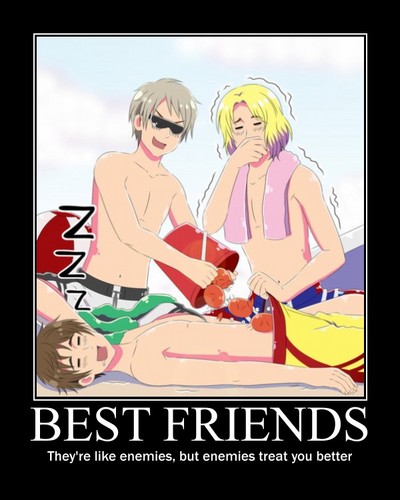 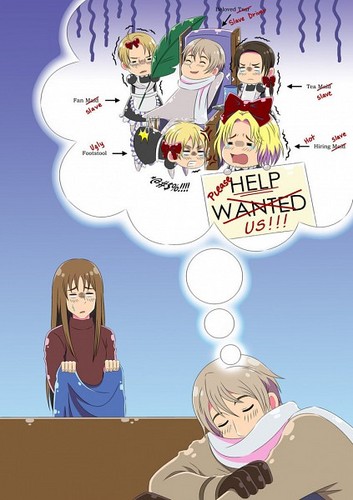 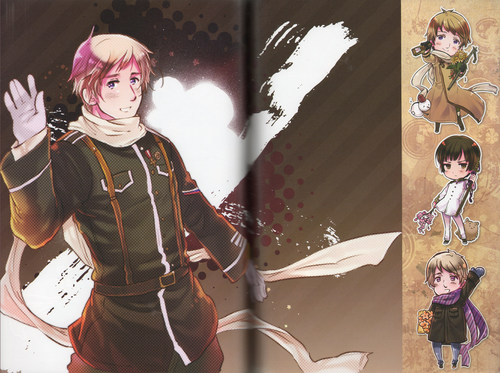 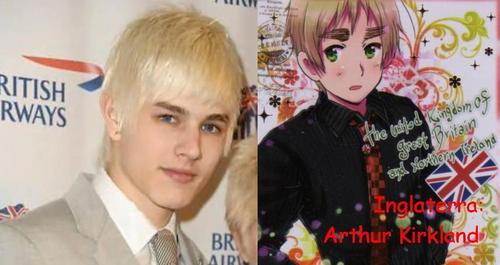 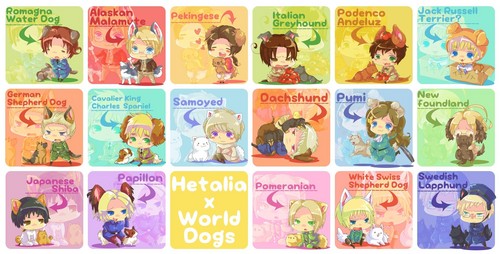 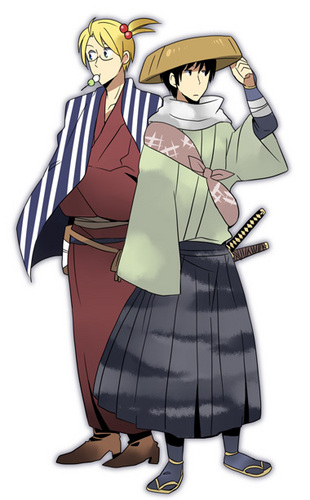 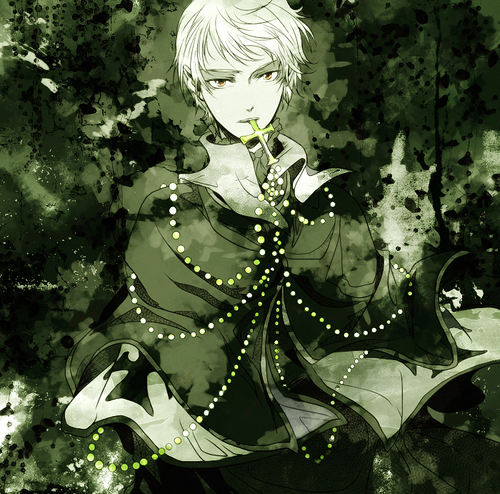 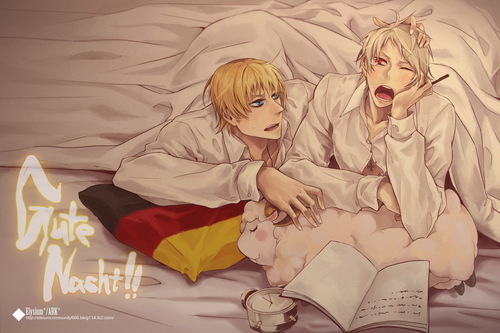 4
Germany Prussia
added by Hidan71
Source: not mine 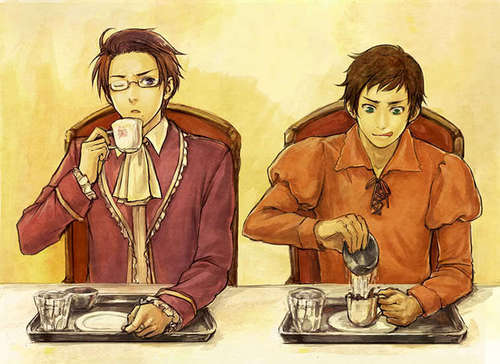 3
Spain and Austria
added by Hidan71
Source: not mine
8
<Hetalia Facts>
posted by fadas
< Hetalia Facts >

The source for these information’s are from:
link

1. The opening theme for Hetalia is the theme from ‘2001 A Space Odyssey’.

2. Old Man Fritz was actually a King of Prussia. His rea name was Fredrick ll. He was known as ‘Fredrick the Great’ and named ‘Der Alte Fritz’ which translates to ‘The Old Fritz’. He was the ruler at the time of the Silesian War. He was best known for being an Amazing Military Leader.

3. Sweden is homosexual but only towards Finland. 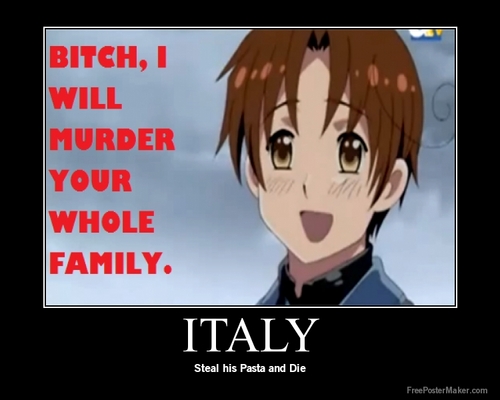