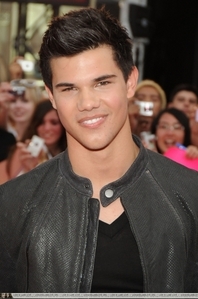 Taylor Lautner
Were you doing any stunts today?

I’ve been doing a lot recently, yeah. The cool thing is, they’ve pretty much let me do most of my stunts. I got to do all the dirt bike riding, I got to do this really cool sequence that I’m actually not going to tell you about, because I want you to wait to see it. But yeah, the stunts have definitely been my favorite part so far.

What physical preparation did you have to do to get ready for the stunt work?

Well, I had to put on some weight. (Laughs.) While filming 'Twilight,' I knew that Jacob’s character transforms, not only emotionally and mentally but also physically, so I immediately, the day after filming Twilight, hit the gym, started eating a lot – good food – trying to pack on pounds. And here I am, thirty pounds heavier!

Was it harder or easier than you thought it would be?

The actual getting into the gym and working out process was easier, but the eating was harder. Because I had to eat, and everyone’s like 'Are you kidding me? I’d love to eat like that!' I had to eat every two hours. At one point, my trainer said, 'Put anything in your mouth. Go to McDonald’s, get the biggest shake possible, I just need to get calories in you.' Because my body fat at the time was only, like, seven and a half percent.

So you were on the Michael Phelps diet?

Yeah! Seriously, I’d wake up and my trainer would say, 'You need to have six egg whites, and bacon and toast and...' It became a lot, so that was the hardest part. Especially putting something in my mouth every two hours.

Are you still eating like that? You still have to maintain the regimen?

Yeah. I’ve gotten used to it, but I definitely didn’t want to show up on set – now is the most crucial time, when I’m filming – so no, I’m definitely keeping it up while I’m up here.

Can you describe the new movements you had to learn for your Wolf Pack scenes?

Well, I didn’t have anything to do with the Wolf Pack, but I did go through some dirt bike training, because I really hadn’t ridden before. So I had a couple lessons, so when they threw me on the bike I didn’t die. The biggest thing with Jacob’s physicality is, pre-transformation he’s described as clumsy, he trips over his own feet, he’s a little kid. Then, as soon as he transforms, he all of a sudden becomes very agile. So, it wasn’t certain movements or specific things I had to do, it’s just all of my movements together, even as simple as walking, had to have more of a presence, definitely easier than before.

Do we get to see you phase?

Um…yeah! You will. You’ve got to wait and see, but it’s definitely going to be cool.

What percentage of time would you say you spend shirtless?

I’d say the same as the books. I’m not going to give you a specific percent, but the great things about this series, and the movies , is we stay true to the books. So if you read the books, you know what the movie’s going to look like.

Are you using your martial arts expertise a lot?

No – I mean, Jacob doesn’t do martial arts. It helps with the agility, yes; that’s what it does help with, but it’s not like Jacob comes out and [uses] kung fu on the vampires. (Laughs.)

Have you seen any production art of what your character looks like after transformation?

Very sketchy ones. They’re literally, like, drawings, nothing in detail. So it’s really going to suck, waiting all this time – even though it’s such a quick turnaround. I mean, we’re finishing up here end of May, and it’s coming out at the end of November already. Those months in between are definitely going to be hard, because I’m really excited to see what everything’s going to look like.

They said that for your Jacob the wolf scenes, they’re going to keep your eyes

I believe so, because when Bella, all through the books, when she looks into the wolf’s face she sees Jacob’s eyes.

Does that mean you’ll spend extra time in a CG studio to capture that?

I don’t know. I think it’s as simple as taking a picture of my eyes and just pasting that on the wolves. I did get body-scanned, is that what they’ll use? Gotcha. Oh yeah, my head body-scanned. Yes, yes, yes.

And did you have any time to do anything between this and 'Eclipse' or are you just going to take a break?

I’m actually not sure yet. While I’m up here I want to focus as much as possible on 'New Moon.' I’m leaving everything to my team back home to work on. But yes, we’re definitely working on things. Nothing is solidified yet.

Will you try to bulk up even more for 'Eclipse' and put on more weight?

Yeah, I am. Jacob continually grows throughout the series, so that means…no matter if I’m doing a film or not, I’m still going to have to put on a little bit more weight.

Do you have a target weight right now?

I’m going to try and put on another…I’ll shoot for another ten. We’ll see what I can do, but I’ll be working hard.

How often do you go to the gym?

About five days a week. At one point, I realized I put on a lot of weight, and then I started losing weight dramatically and I was like, what’s going on? Why am I losing all this weight that I put on? And what I realized is that I was actually over-working myself. I was going seven days a week, I wouldn’t take a day off, and I would be in the gym for two and a half hours, and I was just burning more calories than I was putting on. That was my biggest problem. So then, I had to cut back; four or five days a week, and not be in the gym too long.


That was your real hair, right?

No. This is! But no, the long hair is definitely a wig. I just wrapped the wig a couple of days ago; that was amazing. The whole crew gave an applause, I was so happy. They’re like, 'So, do you want to keep it?' I’m like, 'If you give it to me, I will probably burn it.' (Laughs.)

What’s been the biggest difference between this shoot and the Twilight shoot?

We know what we’re making this time around. I mean, for the first film, we really had no idea we were making a big film, we just knew that we were all in love with the series and wanted to make a great movie. But we didn’t know that all the people were going to fall in love with the movie and it was going to be as big as it was. Now, we’re coming into 'New Moon,' you know, with a little bit more pressure, but we’re trying to push that behind us and not think about that, and stay focused on what we need to do.

They’re both so talented in different ways. What I love about Chris is the set is very calm and we’re just having a lot of fun making the movie. And then you sit back and you look at the results that are happening and it looks amazing so far. I’m so excited to see it. And you just sit back and see what’s going on, and you’re like, 'How are we having such an easygoing, relaxed time making this movie, and it’s turning out the way it is?' At the same time, the conversations with Catherine – she just related to us so well. So does Chris. They’re both talented directors, and I’m thankful that I had the opportunity to work with both of them.

Have you had a chance to meet David Slade yet? Has he come to set or met anybody?

He came up here, briefly. I was in the middle of a stunt rehearsal, and he showed up with Wyck, one of our producers, and Wyck was like, 'Hey, this is David.' And at that point he wasn’t signed on to the film and I had no idea who he was. Then all of a sudden he started putting up these ‘camera hands’ in my face; 'Yeah, I think this would be a good angle right here.' And I’m just sitting there going, 'What is he doing?' Then finally, as he’s doing it, Wyck says, 'Oh, I probably should tell you who this is. This is David Slade. He’s probably going to be doing 'Eclipse.'' I was like, 'Oh, that makes sense now!'

If you could give Jacob, as a werewolf, one more power, what would it be?

Oh boy, that’s a tough question. Um…I want to steal one of Edward’s powers, because I like them. But then I’d feel like I’m betraying Jacob if I said that. (Laughs.)

Which one of Edward’s powers would you take?

Are you liking having a Wolf Pack? You’re not the only one anymore

Yeah, it’s fun! They’re a lot of fun, they’ve got a lot of energy, they’re fun to have around. I’m really glad that they were able to come up and have fun with us.

The sad thing is, it’s not gonna be me. It’s gonna be a CGI wolf. But I’m sure it’s gonna look just great.

How did you all develop the bonds that have to translate on screen?

We hung out, while they were up here. We went to dinner, we went to some movies. We all get along, so I definitely think you’re going to see that in the film. They’re fun guys, they’re easy to get along with.

Are you all BFFs now?

I don’t know if we’re BFFs! But we’re friends.

Have you wrapped, or how much more shooting do you have?

Let’s see. We’re almost done. I think we’ve got another two weeks left, and they’ve got a couple of scenes left. It’s sad, but it’s alright. We’ll be back soon.

What’s been your favorite scene to film so far?

Um…I’d either say, some cool action scene I got to do, because I really do like the action, or I really like the break up scene. We call it 'the break up scene.' It’s the first time Bella sees Jacob after he’s transformed. When she comes to his house, and she sees for the first time that his hair’s cut, he’s different, what’s up…? And he tells her, 'We shouldn’t be friends.' It’s a really emotional scene.

Considering how moody Jacob gets in 'New Moon' – toying with Bella’s emotions – do you feel bad at all?


I don’t feel bad one bit; I feel bad for myself! (Laughs.) No, when I was reading the books, I felt so bad for Jacob’s character. But now that I’m actually living him, I feel way worse. Bella’s toying with Jacob! I don’t care if she’s ripped between the two guys, I feel so bad for Jacob, because she confused him; one moment, she’ll want to kiss him, and the next moment, she’s ditching him for Edward. I mean, yeah, I understand where Bella’s coming from, and it’s a crappy situation for all of them. But I feel really bad for Jacob.

Yes, so am I.
kwnstantina13, Cittycat19 and 1 other like this 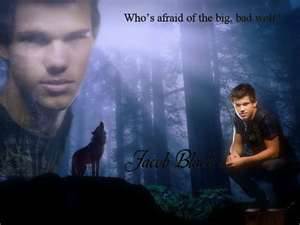 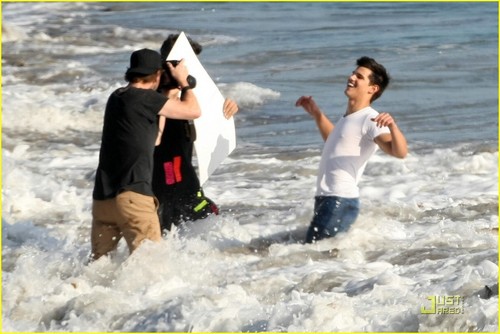 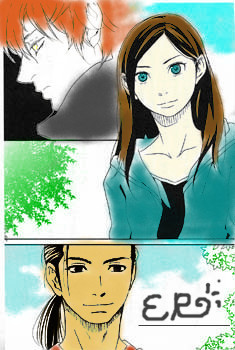 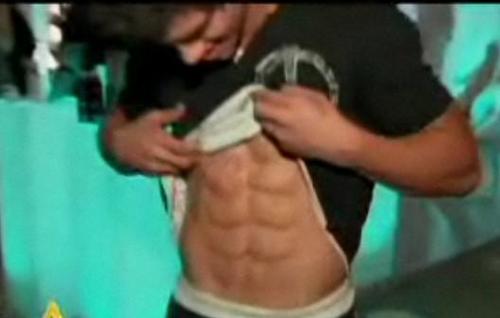 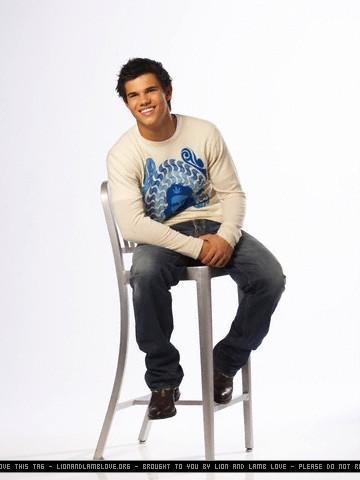 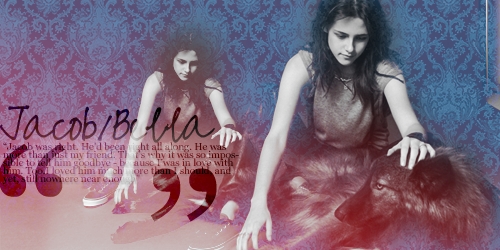 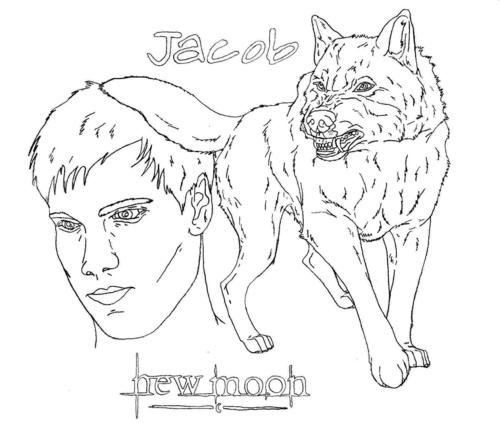 1
Jacob and his wolf form
added by Shastaflame91 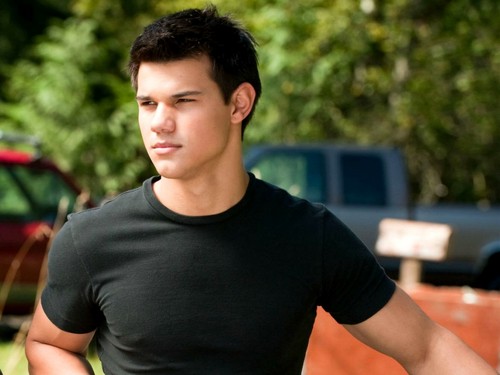