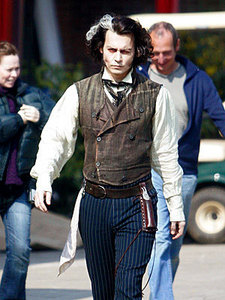 I know this is for Johnny Depp characters in general, but I will post this here as well in case any of you are interested in dressing up as Sweeney Todd for Halloween. This costume breakdown will help make your costume highly detailed and accurate.

This article is very picture heavy.

This is for anyone who plans on cosplaying from Sweeney Todd.
This particular costume breakdown is for the Demon Barber himself.

I have been cosplaying Sweeney Todd for 3 years now, and have put in a great deal of time researching and looking at pictures of the Sweeney Todd costume. So I thought I would share a bit of what I know.

First we will start out with general items, before I get into smaller detail
s. As you will see in the picture next to this paragraph, you will notice some key items that Sweeney Todd has. If you are going to put together a Sweeney Todd costume, you should at least have a white old fashioned victorian-era shirt (usually made out of linen), a brown double breasted vest, a black and white/grey knit neck scarf, dark blue or black pinstripe pants, brown leather belt with razor holster, white rag to clean your razors off with, metal belt clip (to hold the rag onto your belt), and black or dark brown boots. These are items that are key details for a Sweeney Todd cosplay and they can be seen clearly in the first picture, to the right of this text.

Some other items that you can add to your cosplay can include, leather or grey knit fingerless gloves, a replica belt clip, grey barber coat, black leather trench coat, and the silver ring that Sweeney wears on his right pinky. Some of these are smaller details that most people do not even notice, but if you are really going for authenticity then they are necessary to have.

Now I will start going into the finer details of the cosplay, paying attention to these details will make your cosplay much more authentic and closer to the screen used costume.

I will start with Sweeney's shirt. This description will correspond to the first image at the bottom. As you see, there is very fine pleating and embroidery detail on the shirt. From the center, near the buttons, out, you will see that there are small diagonal lines that are embroidered going down the shirt on the first line of detailing, on both sides of the buttons. Next to that are little X's and O's in the next row, followed by some more small diagonal lines that go down the shirt, followed by another row of X's and O's. After the outside row of X's and O's, there are two very small pleats, followed by a row of 4-6 vertical lines of stitching. This detailing is on his shirt from My Friends. His shirt from God That's Good until the Final scene has different pleating on it, and no embroidery. On that shirt, he just has very tight tuxedo pleating on his shirt. so it will depend on which version of Sweeney you want to do. 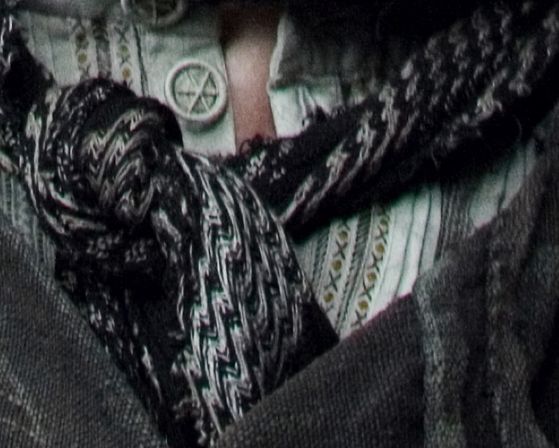 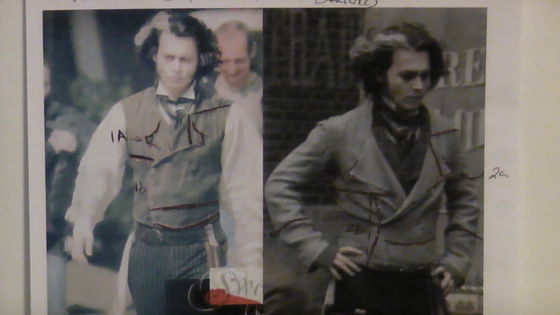 is of his grey barber's jacket. Many cosplayers think that this coat follows the exact same pattern as his vest, however this is incorrect. The patterns are similar, but there are a few key differences that should be paid attention to. Pay attention to the seams on his vest as well, as many people miss these details. The picture (second picture) shows the main pattern differences between the brown linen vest and the grey barber coat. I have traced out these differences. The dotted line on the picture of the barber coat show where the seam actually is, and the solid line showing the vertical seam just shows where it appears in the picture. You will see that the lapel on the right of the barber coat comes to a point. It is not squared off like Sweeney's brown vest. Also there is an extra seam on the left of the barber coat, that comes down vertically from the horizontal seam on the left side of the coat. That horizontal seam, is placed the same as on the brown vest, however the horizontal seam down the middle on that side of the coat is different. The grey barber coat follows the same pattern as the back of the vest, it has the same raglan seams in the back, along with a seam down the center and back ties, which are tied together with thin strings of leather. This can be seen in the first picture below this post. In this picture you can also see the way the sleeves are sewed onto the coat. They aren't sewed on like normal sleeves, so just pay attention to that small detail.
The barber coat also opens further down than the vest, which can be easily seen in the picture below 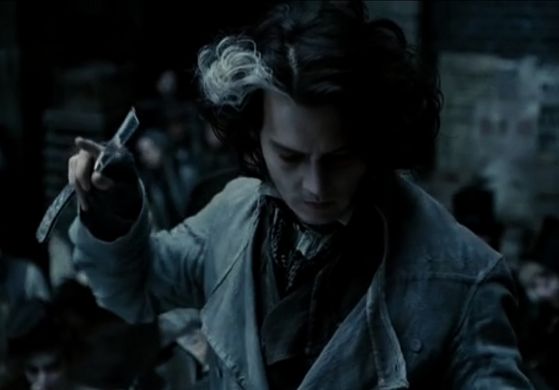 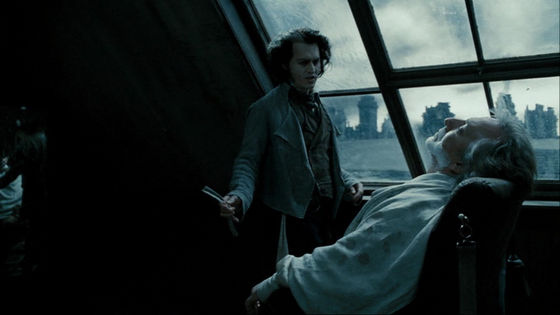 Next is Sweeney Todd's belt clip and belt. His belt clip is one piece of Sweeney's costume that many people who dress up as Sweeney Todd miss. It is a small metal clip that was used to hold Sweeney's rag on his belt. This picture (below this paragraph) shows a detailed image of this clip. As you can see the metal used for the clip is the same as the metal used for Sweeney's belt buckle. The belt clip itself is one piece of metal with a small heart dangling from it. I am guessing that the stone in the heart is made of malachite. Both pieces are probably made out of pewter. Pay attention to the detailing on both the clip and the belt buckle, it looks like there were small dents made in the metal that were then filled with black paint (sorry I cannot describe this better, I do not know the exact metalworking terms for what this is). 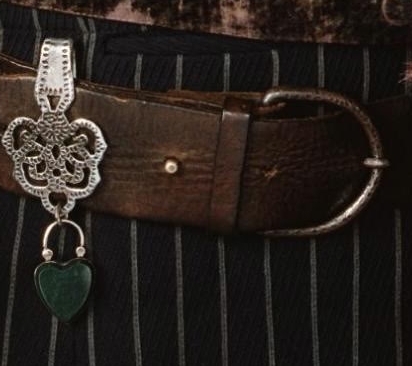 
The buttons on Sweeney's sleeves are also a smaller detail that should be paid attention to (pic below this paragraph). It isn't extremely important, but if you want your costume to be as close to screen accurate as possible, then every detail matters. This picture is of his sleeve, but the same buttons are used on the front of his shirt. They are small off white buttons, cast in resin (I think) that have a little pinwheel design on them. I have seen buttons like this sold once before, but I have not seen them since. If I ever come across a link for them, I will be sure to post it here. 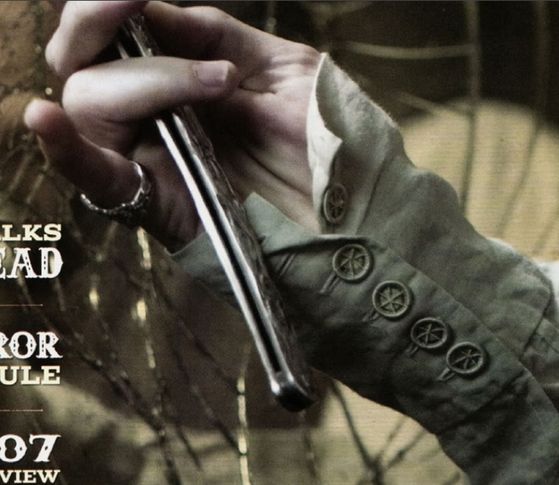 buttons on the sleeves


Sweeney's shoes also have small details on them. There aren't very many clear pictures of his shoes, but I did manage to take a few screencaps of his shoes. The picture of his shoe, shows that there are small hobnails on the top of the soles of his shoe. They are the same hobnails that can be seen on his razor holster (which has 26 of these going around the edge of it). They definitely kept the design very consistent for the whole costume. 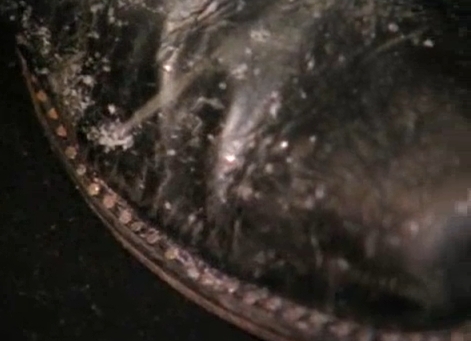 up close of his shoe 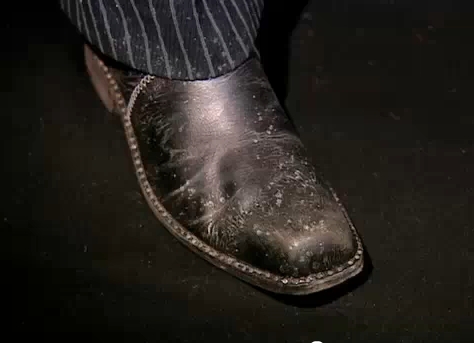 
The next pic just shows his razor holster. Like I said earlier, they used the same small pewter rivets/hobnails as they did on his boots. Kept things very consistent and connected. The picture also shows how the holster was constructed. It is not just a flat pocket, like most people think. Most likely it was shaped based on the fact that Sweeney would be carrying two razors. 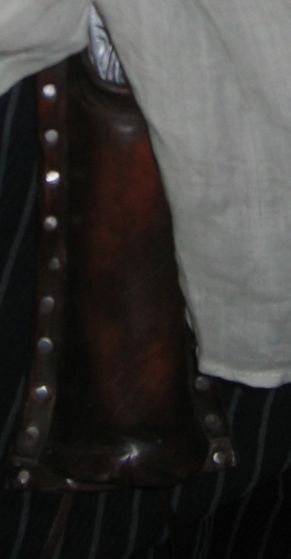 These last few pics are extra pictures of things that I forgot to include earlier.
This first pic shows the alternate pleating on his shirt, so this is the shirt he uses for the latter part of the movie (God That's Good, until the end). Clearly there is no embroidery detail on it, just many rows of really fine pin-tuck pleating. 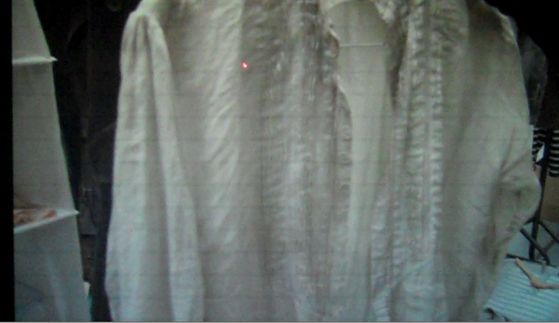 The next extra picture shows the back of his leather coat, which actually has very fine laser etched pinstripes that are etched right into the leather. The coat was designed by Belstaff just for the movie. The company also carried a limited supply of coats for a while. The coat itself was called the Dark Trench. The picture after that is of a promotional poster that shows the edging on the collar of the trench coat, and also shows how aged the coat is and shows the pinstripes better. 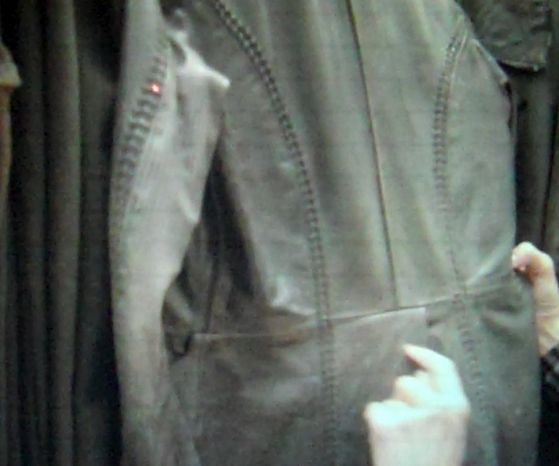 back of trench coat 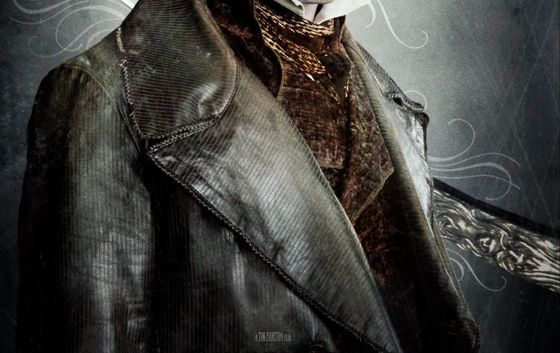 Below is a full list of items and price ranges for the costume items (these prices are estimates, taken from my own experience). The ranges are very wide because some of the stuff you can find at thrift stores or make yourself for pretty cheap, the higher prices come from the custom made stuff (which is what I have had to buy).

That is all I have for now, If I think of anything else, I will be sure to update. I hope this is a helpful reference for whoever may decide to do a Sweeney Todd costume, whether it be for Halloween, costume contest, cosplay convention, or just for fun.


If anyone needs further help, please, do not hesitate to ask. Give me a message on here, or find me on deviantart and message me there (I check that account every day, so you will probably get a more prompt response that way)


link
or
link
or you can email me at fleetstreetnightmare@gmail.com

I am happy to help any way I can with your Sweeney Todd costume needs.

Sweeney hair and makeup tutorial will come soon, once I find the time to actually take pictures when I do my hair. :D
i_luv_JDepp well this will certainly help with my halloween costume, thanks :D 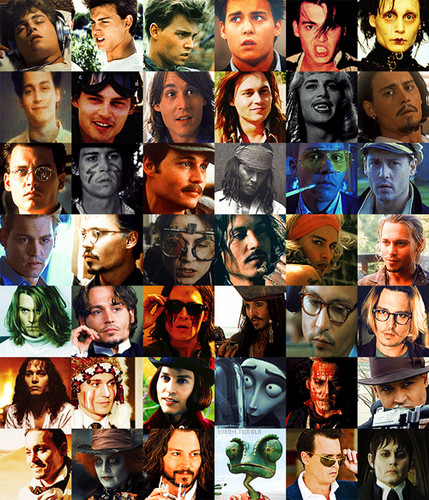 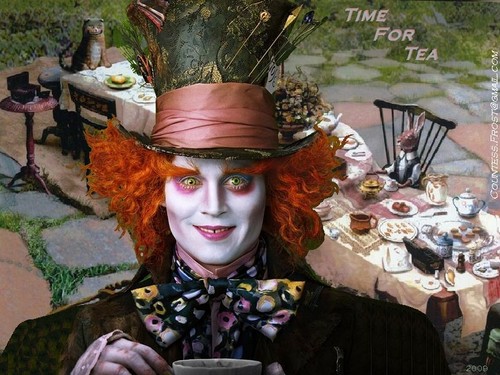 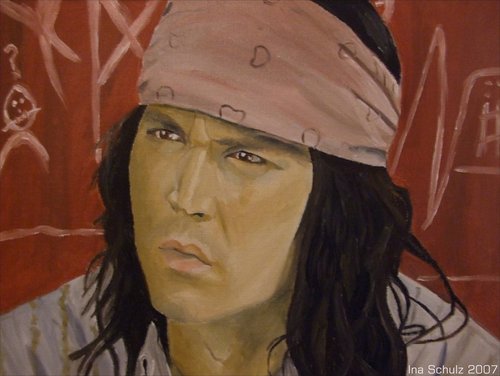 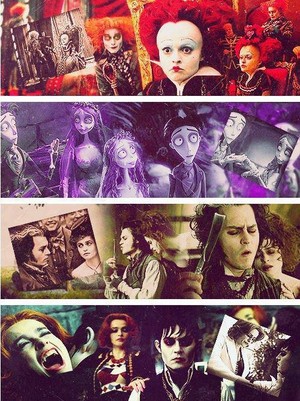 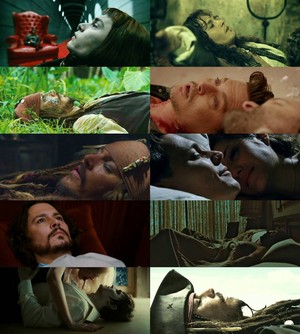 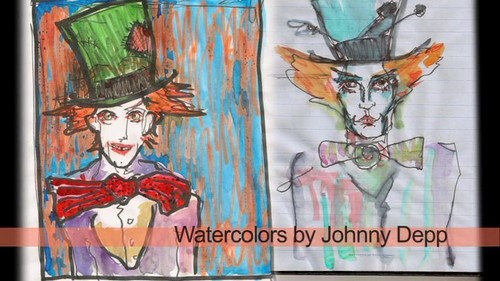 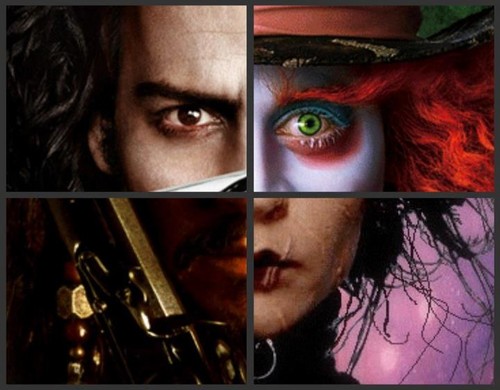 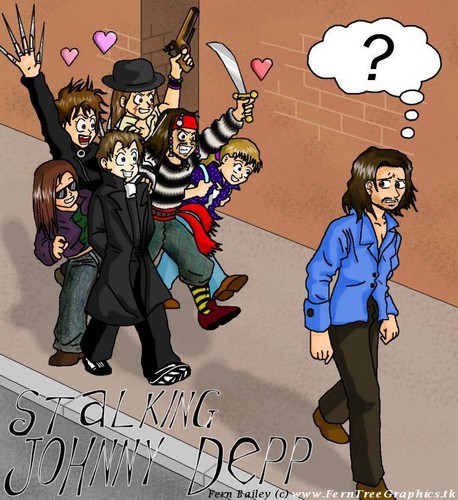 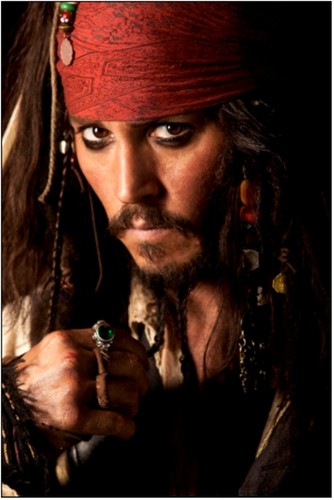 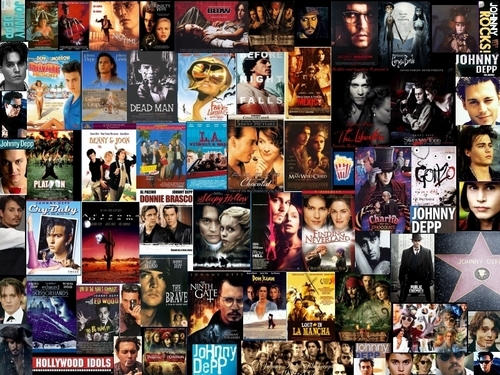 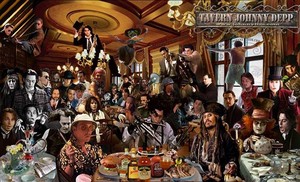 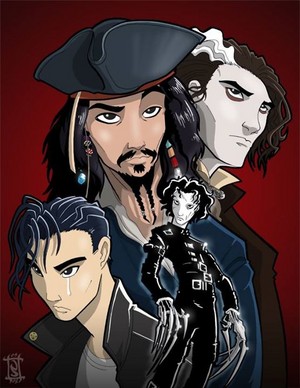 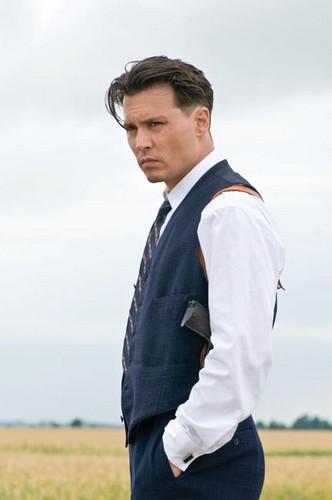 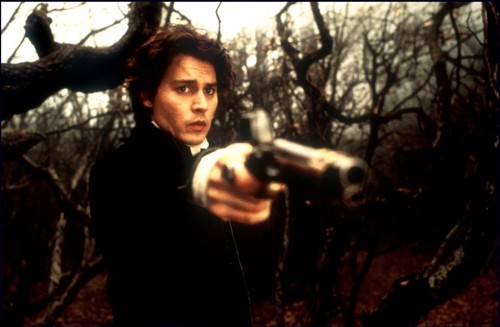 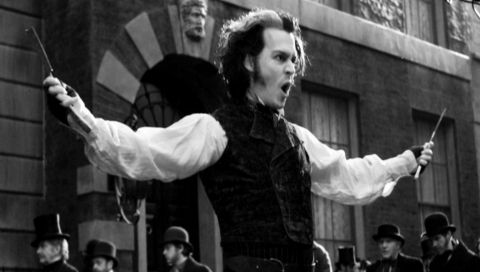 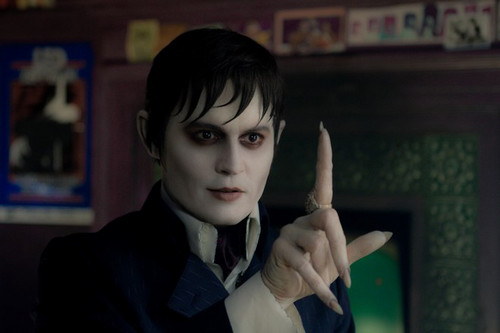 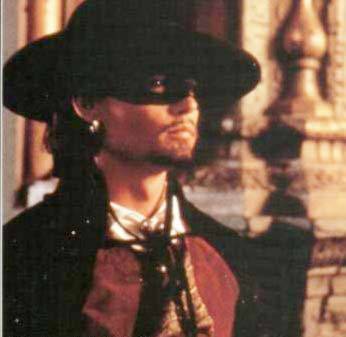