Note: Sorry about not updating so soon! I've been sort of busy, so yeah…You get the whole idea, thought I am really surprised about all the people that commented the story! I really loved the reviews, and to tell you guys the truth, this story was just going to be a one-shot! I was pretty bored one day so I just wrote it…and well, I decided to post it anywhere I could. I am quite pleased with the reviews that I got, which is what motivated me to keep going. Thank you to all my audience!

Second Note: The following chapter is in Kowalski's point of view.

I don't know why I did that. Nothing within my learning told me why I did. I just did it. Rico seemed pretty calm as he began to walk out, and then I had to go on and grab a hold of him. I just felt as if I needed it. I needed a hug, even after being the one to try to break everything off. I needed to feel loved. Needed. Cared for. And Rico was the only breathing specimen who could make me feel that way. Nobody I ever knew understood me as well as he did.

Rico's heart rate spiked sky-high, when I hugged him, and I suppose I should of already known why, but I pretended not to notice. It was actually sort of…cute…in a way. Really thinking about it. And…eh…attractive in way as well. Or in many ways. What I found awkward was that I was actually having these thoughts run through my head at the very moment.

I tried to memorize every detail, just like anyone would when trying to keep mind of a great moment. I had to take count for everything going on. Rico, his lazy smile on his face, shoving his beak past my shoulders. His heavy breathing, whispering fantasies in his head, and his eyes, staring into mine, blinding me in the blue.

"K'walski?" I heard his raspy voice say, warmly, almost sounding mellow. He pulled away from the hug, only held my flipper. The right one to be exact. The one that was meant for hand holding with respect. And carefulness. And more. I sighed a little, a smile growing on my face.

"What is it?" I tried to speak steadily, but my voice seemed to be breaking as I spoke, making me drown into the river of air. Then again, how was that possible? Drowning in air. But I had just experienced it, so it wasn't right to say that it wasn't possible.

"Why?" Rico squeaked a little. Then there was only confusion filling my head. Why what? There was a world of possibilities on what that meant. What did WHY mean? Did he mean "Why did you pull me back?" or "Why did you hug me?" or…the hardest one of all. The only one that brought great guilt into my soul. "Why did you reject me." That phrase was so dull it didn't even deserve to carry a fancy question mark next to it.

"W-why what?" I cleared my throat a little. My eyes began to water, my feelings returning. I felt as if I was reliving that moment. The moment I told Rico I just wanted to be friends. What kind of lie was that? A bad one. Because that wasn't true. I wanted more, whether I admitted it or not. I felt myself pull over on his other flipper, having full access to a couple of his movements.

Rico began smirking, slightly giving muffled chuckles with the psychopathic smile on his face, but at the moment, it just looked normal. Sweet. And something to be remembered. The perfect snap. Now if only I had my camera, I'd be the happiest living soul in the zoo.

Rico's beak parted, and I could tell he was about to talk again, giving me the long awaited answer, but then another call was heard. This time, from Private, as the innocent youth waddled in, zipping on a juice cup and grinning happily as his thirst was being quenched in just seconds.

"Um…Kowalski? Rico? What is going on?" Private looked at us confused, still holding each other with the short, yet warm embrace. Private somehow seemed to know what was going on, but he also knew that it wasn't supposed to be that way. I remembered the cruel words spoken by me: Male to Female. Female to Male. The voice rang in my ear.

"Nothing." I shoved Rico slightly away from me, wiping my flippers from the couple beads of sweat that had formed of how warm our hands had gotten. A lot of people would find something like that disgusting, I found it adorable, and scientific. Then my brain began functioning again. Why were we sweating? To maintain homeostasis, of course. Why were we getting out of homeostasis?

Now that haunted my mind as I tried to expand the search on the word. Homeostasis. Being at a normal stage. Was I getting out of a normal stage? Yes I was. The whole situation was beginning to go Male to Male, that wasn't homeostasis to most, and according to what I had just noticed, neither to my body. I glanced over at Rico, who had a little bit of hurt in his eyes.

"I was…teaching Rico a technique for a new move." I sighed in defeat. Private's eyes that were swollen at the moment began to go back to their normal stage. Yes. Homeostasis.

"Oh really? Is that it? GREAT! We must go outside now, Skippah is waiting for us." Private grinned and then pulled on my flipper, causing me to be dragged out of the room and into the training area that Skipper had set up for us outside. I looked back and caught a glance at Rico, who was slowly following us.

His flippers drooped to his sides and his eyes were bright from a couple of tears peeking out of his eyelids. I could tell he wanted me to tell Private the truth. To show him what I felt. To show him that I wasn't embarrassed of him, but the opposite. But what could I do? What would Private think? What would SKIPPER think? I looked at Rico, and I could tell he read my mind. He waddled up to me as I stood in fighting position, ready to battle Skipper during training.

He eyed me a little, and his look was what spoke. Rico remained silent, but his eyes told me everything. He didn't need to say it out loud. All I read from his numb sight was "As long as you are happy, you shouldn't care what people say." Rico nodded when the phrase clicked, and then he turned his face away from me, his eyes full of shame.

Author's note: Pretty sad. Wow…I can't help feeling depressed after writing this. Wow interesting. If you have any suggestions for my story, please send me a review and I will consider using it in the later chapters. Please, Review! I'd like to get at least 40 reviews by the end of this story, please! Help me achieve my "dream" XD OK…Bye for now…REVIEW!
carsfan, MsKowalski99 and 1 other like this
ThatDamnLlama im posting a comment before reading it :)
ThatDamnLlama now im posting a comment after i read it :)
ThatDamnLlama nice. 5/5
EmoCupCake wow.....another great chapter! You wrote kowalskies pov so well, I can't wait for the next chapter!
dsprtpenguin can't wait for the next chapter!!
LadyPrivate Skipperluvs did a great job… It's a story with a little poetry in it and i like that. :)
carsfan wow! sad..and REALLY cute! I cant wait to read the next chapter! :D
krissynaytowhow sad to say but i lost intrest
Asmith137 Aw, so cute but sad. Love your style, really hope you continue!
5
Why Rico belongs with Kowalski, and why Kowalski belongs with Rico! MUST READ!
posted by EmoCupCake
Me and Penguin11 are in a little...argument. She think SHE belongs with Kowalski...but you know. I don't think that's true! Kowalski belongs with Rico! We are each making articles on who we think should win for the pick we have up. Read both of ours, then go vote!

Reason 2: Their work well together. Rico is like Kowalskis right hand man. If Kowalski needs anything to do an experiment, who is gonna have it tucked away in his belly? Rico of course! And...
continue reading...
2
What is Love? A Kico Story Chapter Two
posted by Sylvia_Puffin
Turned out Marlene just needed help fixing a leak in her pipe. I had it patched up in no time.
I was mad at Marlene, though. Her stupid pipe had ruined my chance with Rico.
...My chance with Rico? What am I saying? Do I think I actually HAVE a chance? That we have a chance?
A chance to love each other?
And those questions only bring up the one I've wondered about my entire life:
What is love?

Rico approached me later. He had a funny expression on his face; sort of hopeful, but almost worried at the same time.
"Never answered," he said shyly.
I sighed. "I never answered what, Rico?"
"You love me?"
I...
continue reading... 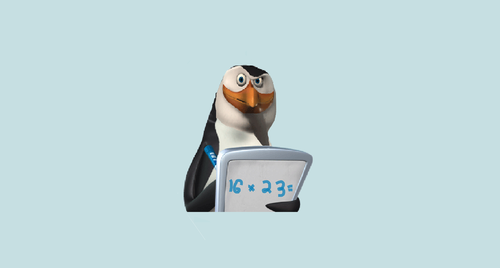 Standing up, he brushed of the flakes and looked around.
There was fake ice and snow covering the landscape,
with stone slabs set out in an area of salt water. If the snow wasn't real then...was this a habitat? Kowalski searched the perimeter for his mate, but came...
continue reading... 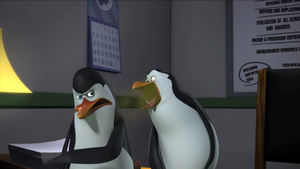 
Sometimes I hate myself.
I don't know why. Maybe it's because I can't speak right. Maybe it's my inability to control myself and think ahead. Maybe it's that ugly scar on the side of my face from that time when I told someone I thought I could trust my secret, and they beat me up.
My secret, by the way, is my sexuality.
I'm pansexual. That means I love everyone. How it's different from bi is I love transexual, nonsexual, etc.
Another secret I have: I'm...
continue reading...
3
Meaning of life
posted by skipperluvs
This is just a really quick ONE-SHOT. I am right now, inside my mother's van while she is going insane because my sister won't shut up. My dad took my sister up to the church, so my mother could be calm, and left me here to make sure she is safe. (Yes, I am in a church's parking lot) So…I have nothing to do and decided to entertain myself by writing a ONE-SHOT! Wahoo! I must hurry though…the battery is at 65%! OK…So…enjoy (: Oh, another quick note, this is in Kowalski's point of view.
_________________________________________________________
What is the meaning of life? Why were animals,...
continue reading... 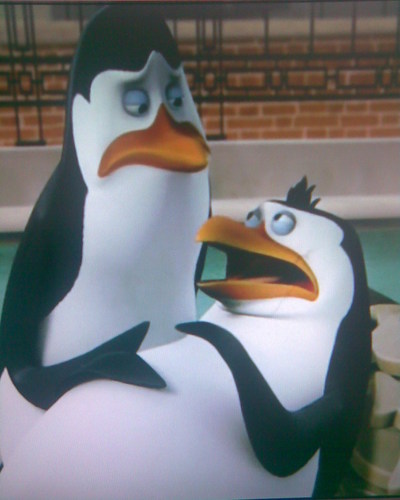 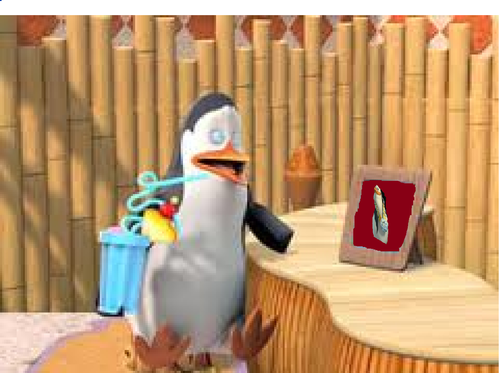 Stupid Thing I Made :P
added by Sylvia_Puffin 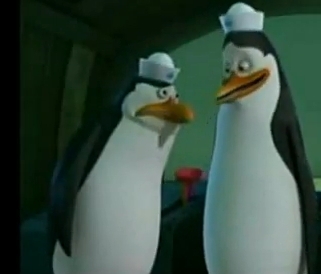 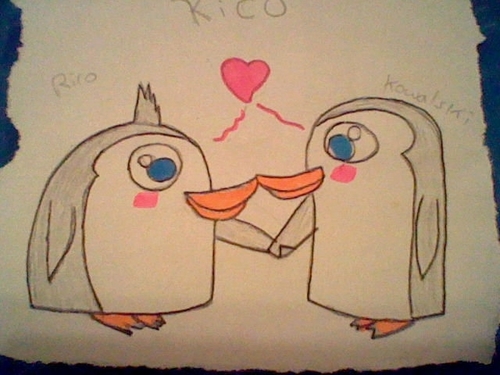 1
Kico-Kisses
added by EmoCupCake
Source: ME!!! And my friend Taylors camera- you rock dude! XD 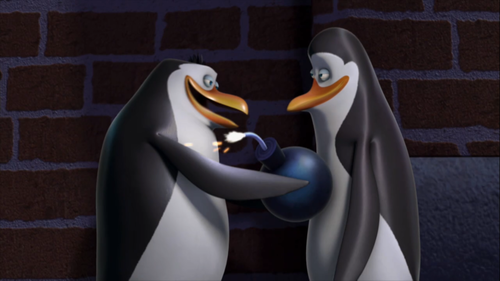 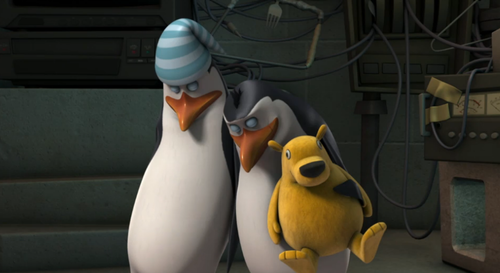 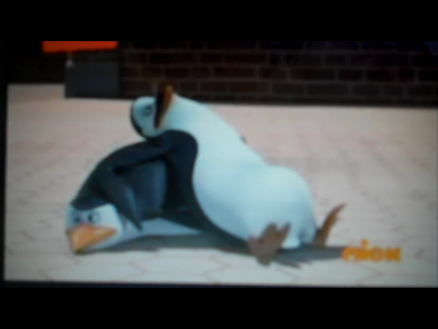 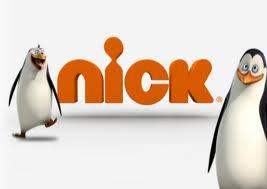 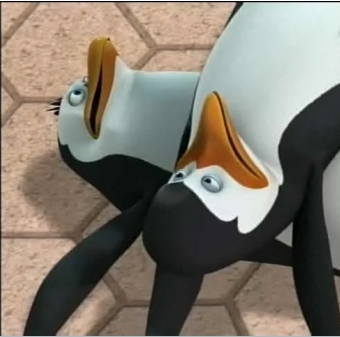 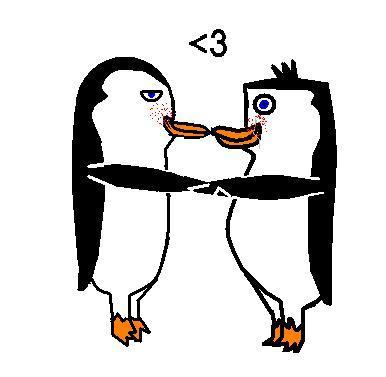 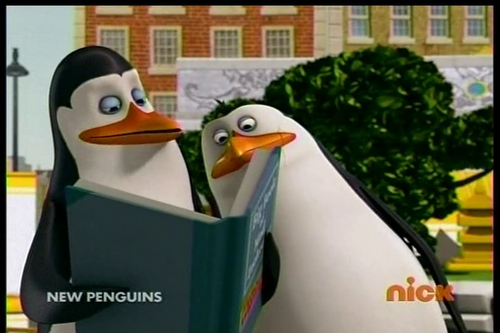