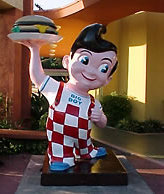 I don't eat much fast food anymore. Maybe it's because I read Fast Food Nation a few years back and that scared me off the chalupas and whoppers. Or it could be because the doctor told me to watch my fat intake and ease off the fried foods.

When I really think about it though, those excuses are kinda lame. I think that the real reason I don't eat fast food is because fast food restaurants are doing their damndest to scare us away from their restaurants. I mean look at the weirdos they have peddling their food. Scary clowns? Creepy old men? Purple blobs? The fast food companies been subjecting us to these creeps for years, but recently the situation has become unbearable.

So without further ado, I present to you my list of the 10 creepiest fast food mascots [note: I'm limiting the list to characters peddling goods for fast food outlets - I realize that the Kool Aid Man and Count Chocula are also disturbing, but that's for another list]: 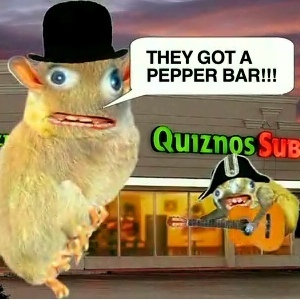 Who thought selling fresh, healthy sandwiches alongside a mangy deranged rodent was a good idea? The last thing I want to think about when I'm eating food is some bubonic plague carrying, disease-ridden rat. At least Subway had the decency to saddle us with link.

Need more evidence? Tell me you want a Quiznos sub after link 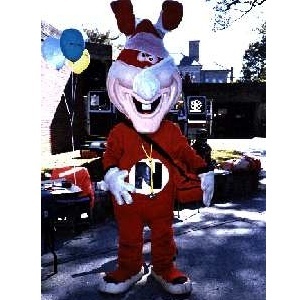 A fixture of the Dominos Pizza commercials from the 80s and 90s, the Noid was a small goblin-like humanoid with rabbit ears dressed in a tight red latex suit that communicated via a series of chortles and grunts. Tell me that ain't creepy.

Need more evidence? The link was bad enough. But adults dressing up as the Noid for Halloween and, more recently, 80s parties? Oh the humanity! 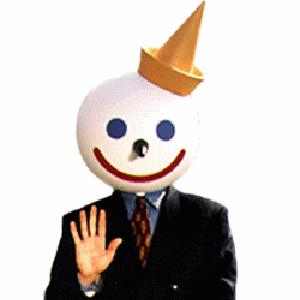 Most of us think that clowns are creepy. But what about jack-in-the-boxes? Well, they're just glorified clowns, with springs that pop out of boxes. So they're double creepy.

Need more evidence? Any of the link with his big round head and that cheshire cat smile. 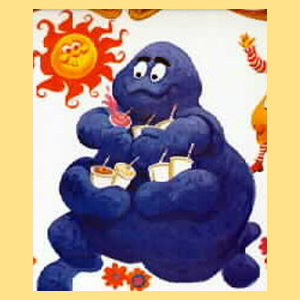 Dear McDonalds, what exactly is this Grimace creature you have spawned? Is he a mutated prune? A malformed mushroom? Is he an obese American fast food consumer whose skin took on an unearthly hue after consuming one too many Happy Meals? Either way, the last thing I need to think about when I'm eating a 1000 calorie cheeseburger is some overweight muppet.

Need more evidence? Did you know link and a penchant for stealing milkshakes? He also had an equally hideous green uncle, link (as if one wasn't enough). 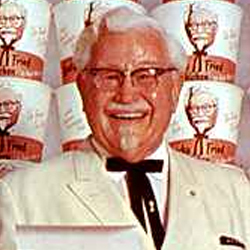 It's like Hannibal Lector is sporting the Oompa Loompa hairdo (at least in this pic). I dunno, when I'm eating Chicken out of a bucket I really don't want some old guy with a goatee grinning back at me. Which makes me wonder, why aren't there more hot female fast food icons? Honestly, where are they? Where's the Colonelette?

Need more evidence? Apparently in Japan most of the KFC locations have on-site Colonel statues to greet you. In the Japanese city of Kansai, poor treatment of one of the Colonel statues has led to an apparent link on that city's baseball team. 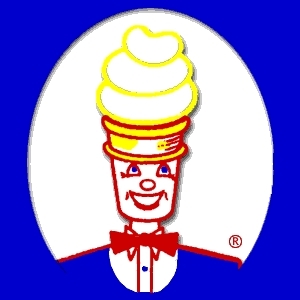 Mister Softee has helped peddle ice cream treats to kids in the Northeast for 50 years. I cringed when I first saw him. Man with a cone for a head with soft serve billowing out the top. And don't get me started on his link (isn't this the kind of thing that gets inserted into film trailers for The Omen?) 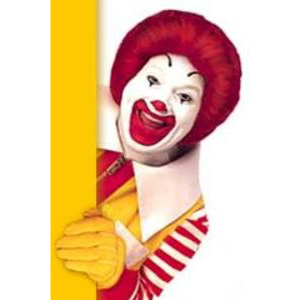 Does this one really require explanation? The flaming red hair. The pasty white face. The demonically shaped mouth and the pencil thin arched eyebrows. Yikes!

More creepy evidence: There's no shortage of horrific McDonald's television commercials, but this one link really bugs me. 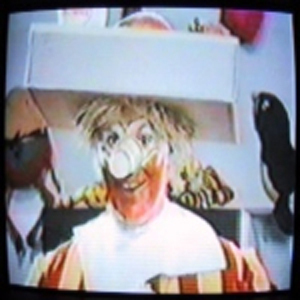 The only thing more horrific than the current McDonald's clown is the old-school original. Who designed this monstrosity? It looks like someone strapped a food tray atop his head and attached a dixie cup to his nose and called it a day (link). This thing is hideous. If I saw this on the street, I'd run for help.

Need more evidence? Even after they revamped the look of the old-school Ronald, he was still damned freaky. link 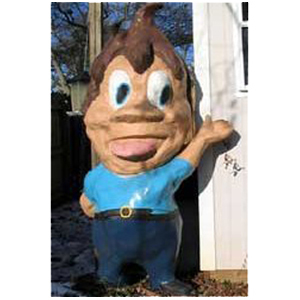 More soft-serve inspired mascots. Twins 'Tee' and 'Eff', like Mister Softee, have been around for half a century. But unlike Softee, there are two of these menaces, so I'm putting them up higher. 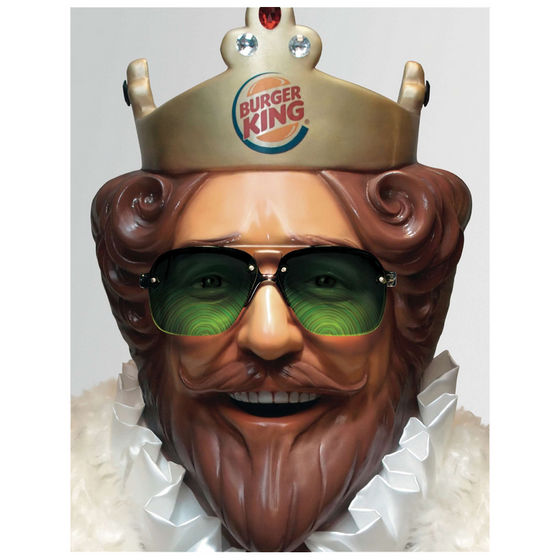 The only thing scarier than Ronald or Mister Softee is Burger King's 'King'. As if to underscore the King's inherent creep-factor, Burger King even link.

Need more evidence? Remember the link ads from a couple years back (link, and link)? Do you really want to wake up to this guy? DO YOU!?!?

The only right answer folks is "Hells no!!!"
OuranAfterHigh, cliff and 25 others like this
END_OF_DOCUMENT_TOKEN_TO_BE_REPLACED
loading additional comments...
hhh Burger King gets double honors for also having the Subserviant Chicken... http://www.subservientchicken.com/
xoxoxox these guys are so so creepy, i sware to god if i ever saw that burger king guy outside of my window, i would cry. he is just so SCARY!!!
Hugh I bet all of you are too young to remember the original King. He was a man in a King costume, but no plastic head.
Hugh The creepy part is Old King would twist his ring and reveal a secret room in the back of the BK that only children and himself could enter.....
ang42202 Putting women in fast food advertising is a mistake. There was a woman in a Carl Jr. ad recently but it scared more people away from fast food than #s 1-10 combined...I hear the car industy is suffering as well.
shope Grimace is a tastebud! And he's named that because you'd grimace when he stole your milkshake. Definitely bizarre.
toxicyuffie Dude, you missed one. And THIS one LITERALLY made me vomit (as I was eating in front of the tv)... That disgusting, stale pizza slice from Pizza Hut. The commercials were for the "Pizza Head" show or something... I saw this deformed, malicious, rotten thing and I actually got physically sick - I didn't eat pizza for nearly two years after that.
beckletts Clearly many of you don't appreciate the utter brilliance of the King... while his constant sneaking around can be seen as rather creepy, there isn't a person around that wouldn't know who you were talking about if you mentioned "the king"... Great commercials Burger King!!!!
Mokiema2 What about that Domino's Fudgems thing????!!!!
SlimRuleS speaking for myself i like the king
desertdragon I'm not touching any food whose producers think they need a freaking (literally) mascot to try to convince me to eat it. I liked the post - all of the above mentioned entities totally creep me out.
brucegrillmster The "King" is as creepy an icon as I have seen on TV in years! I don't eat much fast food, but I DO NOT go to Burger King since this guy came out.
sindarkcloud Like i work for quiznos and thank god it wasnt till after that rat thing.....just the site of it makes me wanna quit exapt its a great job and the rats gone. wow ud think thed call the exterminator first before shooting a food commercial!
jemstarearrings I think I'm one of the few people who loves the Burger King ads with the "Burger King." Burger King has gotten really smart-assy with its marketing anymore; if you go in to eat, the sign on the door says "PULL. You can push if you really want it your way, but you won't get far."
tiz wow..lol.. but I think the creepiest is #10, the Quizznos rat/hampster... what is it??
sheenman00 cant agree with the colonel. he is not a mascot he was the man who started KFC so he dosnt really count as a mascot
hellgirl223 ok that rat thing for #10 is hilarious i laughed when i looked at that pic ahahaha :D i dont think the colonel scares me or the bk king.. the one that scares me is that quinzo rat-thing, ronald mc donald (the new one), the twins thing and the noid. The old school ronald looks just like some guy putting on ridiulous costume that doesnt make sense, grimace is just... not creepy, burger king guy just also isnt that creepy, jack looks like some guy putting on a circular fake head and mister softee is just....... not creepy at all.. ohh and that pic of a boy u put in the beginning holding that burger is creepy too. who is he?
ValueDining I completely agree about the King - he is really odd...but I do Like Jack (of Jack in the Box). He reminds me of an old boss - big head with plastic inside. More on Jack in the Box: http://valuedining.com/fast-food/jack-in-the-box
cdrates The King is as creepy as he is awesome!
cwsmitty Forgot to leave a link to the referenced mascots: Wendy: http://www.tvacres.com/images/wendys_logo2.jpg Clara Peller: http://www.tvacres.com/images/clara_peller5.jpg
cwsmitty Two separate comments: The character at the top of the article is from Bob's Big Boy restaurants his name is "Big Boy". As for female mascots your all forgetting about Wendy's, who had 2 mascots/spokes persons Wendy who the restaurants were named for and Clara Peller famous for the tag line: "Where's the Beef?!" both great mascots.
genevie oh my! i sure as hell, well stay away from this fast food, i hate clowns! argh! they remind me of that movie with the killer clown. http://genevie.blogs.experienceproject.com/360264.html
lovedogs3 Jack is really creepy for sure.
MoSteele Ronald McDonald just reminds me of Pennywise from Stephen Kings IT!!
ronaldmcdfan I don't agree with your number 4. Ronald McDonald is not creepy. I actually find him gorgeous and sexy. Well the Ronald McDonald that I grew up with from the 1990s and I still find him sexy with his new look. Totally off-topic, but the only clown that is evil and bad is The Joker from the Batman universe. I love Ronald McDonald. But I do agree with number 3 and 1. The old-school Ronald was kinda creepier and The King from Burger King is the creepiest of them all. Ronald McDonald is the only clown that I don't find creepy or that I'm not afraid of.

4
Burger King: Wake Up With the King #1
added by greedo
One of the creepiest fast food ads ever. Man wakes up to breakfast in bed with the King.
video
burger king
commercials
creepy 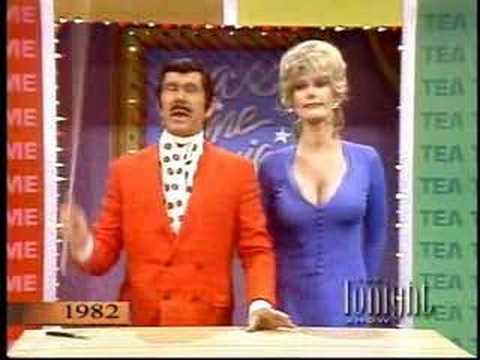 1
Jhoon Rhee Commercial "Nobody Bothers Me"
added by sfdude
A classic commercial from the MD/VA/DC area for Jhoon Rhee self defense.
video
jhoon rhee
self defense
funny
commercial

4
Don's Guns: Creepy Ad
added by bruddah
One of the creepiest ads I've ever seen. Listen to this guys laugh at the end. Crazy.
video
commercial
weird
creepy
guns

4
Wendy's 'Where's the Beef' Commercial
added by papa
Memorable Wendy's ad campaign. This was a classic quote from the 80s. Looks really dated now (what do you expect this was over 20 years ago).
video
wendys
hamburgers
fast food